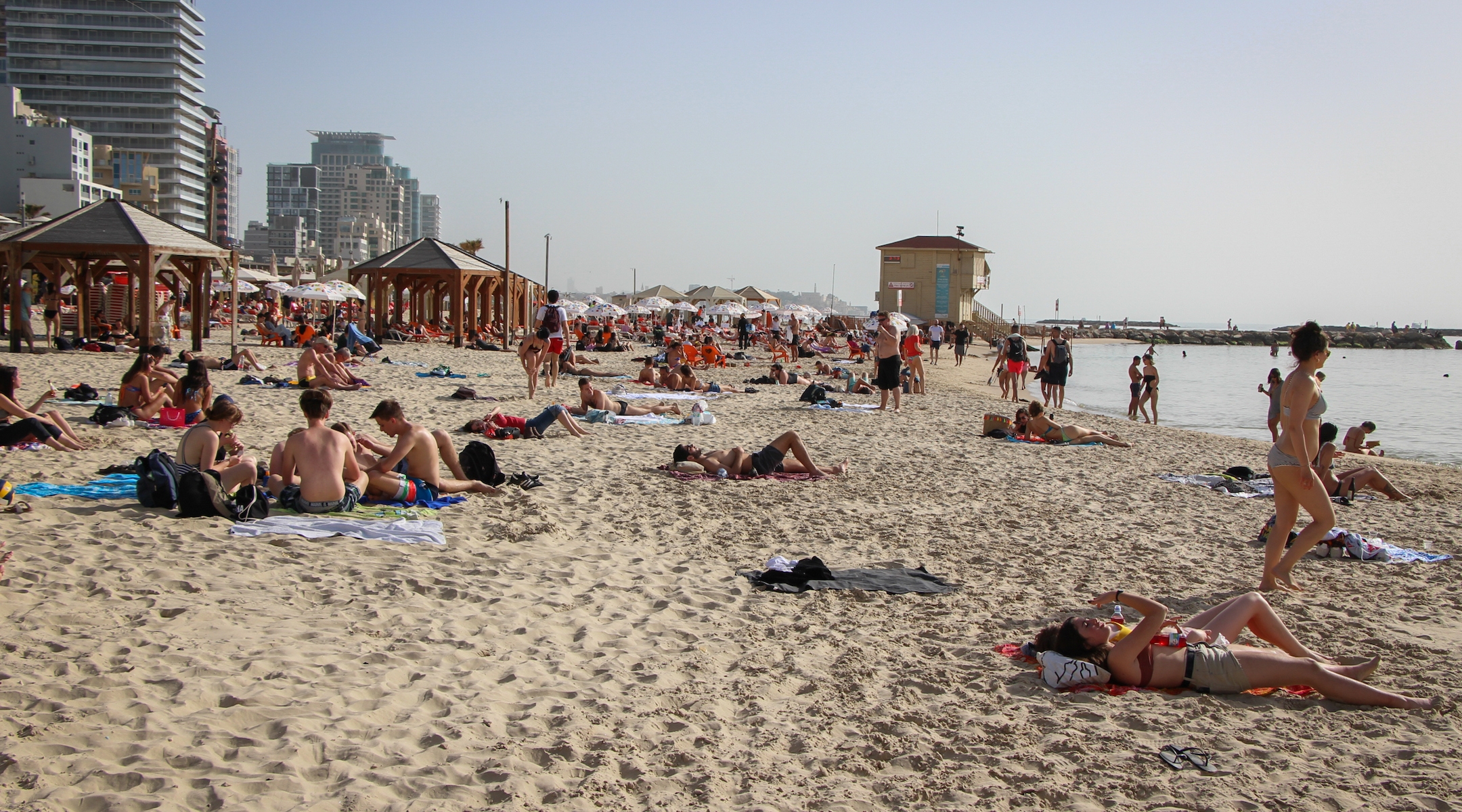 TEL AVIV (JTA) — Even by Israeli standards, the country’s latest general elections have been exceptionally dirty, rife with personal attacks between candidates and fake news.

But in an arid country where the blossoms and mild temperatures of spring are gone within a few weeks, the vote’s timing was impeccable.

That’s because in Israel, voting day is a holiday. And this year, Israelis certainly appreciated how the early election fell serendipitously in the middle of a week, during the lazy work period that separates Purim from Passover.

Sunbirds like Ela Shnaider, a 27-year-old accountant and Likud voter, cleared their morning on Tuesday in favor of the beach. (Prime Minister Benjamin Netanyahu leads the Likud party.)

“It’s such a great preparation for the summer,” Shnaider said, lying on a yellow towel on the unfortunately named Metzitztim Beach in northern Tel Aviv — it means “peeping Toms beach,” named after a 1970s cult movie.

“Plus, it’s a way of getting a detox from this elections campaign,” she added, noting that she wasn’t happy when activists for the Blue and White party of Benny Gantz and Yair Lapid called Netanyahu a traitor.

Netanyahu’s campaign, in turn, attempted to portray Gantz, a former military chief of staff, as having mental issues — capitalizing on reports that he required psychological therapy years ago.

With growing awareness of the damages of summertime exposure to the harsh Middle Eastern sun, many beachgoers her age limit sunbathing to early April, when companies expect employees “to put in an effort ahead of Passover,” she also said. “And this year: Voila! Elections.”

Unlike in the United States, Israeli voters have no real way of knowing when elections will take place. The country’s multiparty system makes government coalitions so unstable that they fall apart on average every 2 1/2 years, forcing elections that may take place at any point during the year. The last Israeli coalition that completed its mandated term dates back to 1988.

The policy of making elections a holiday began in 1958, presumably as a means of either helping voters turn out, celebrating democracy or both. The law declaring the holiday does not explain the decision.

“The Americans have Thanksgiving as their way of expressing gratitude over the benefits of their way of life. We have elections day!” said Shlomi Elba, a 47-year-old lawyer and avid player of matkot, the beach pingpong game whose pops and clicks, produced by a ball hitting a wooden bat, result in the cacophony that many Israelis associate with holiday on the beach.

Yet despite the temptation to play hooky and the absence of mandatory voting in Israel, its citizens have one of the world’s highest turnout rates at an average of approximately 70 percent (higher in some estimates). That surpasses the United States by nearly 20 points and trails only countries such as Belgium, where voting is mandatory, and the Netherlands, which has had rates as high as 80 percent.

Some Israeli families plan parties to fall especially on Election Day — right after elections are announced.

“It’s just perfect because this way it doesn’t eat up your weekend,” said Alon Samo, a 39-year-old illustrator from Tel Aviv. “I was done with my cousin’s bat mitzvah by 4 p.m. with plenty of time to make my way back home and vote.”

Samo, who voted for Blue and White, said he considered “playing hooky and not voting at all.” But, he added, “In the end it felt too guilty. I was given a free day, so the least I can do is show up.”

Some voters took a more entrepreneurial approach to voting day than that of Samo or Shnaider, the sunbather.

Gili Ronen, a high-tech executive from Hod Hasharon, gathered his childhood friends to go what he calls “orchid hunting” near Haifa, some 70 miles to the north of his home.

Israel, he noted, has about 30 species of orchids, “and they all bloom for about three weeks between March and April.” Ronen’s seven friends all voted at 7 a.m., when Israel’s 10,720 ballot boxes opened Tuesday.

“Then we all met at the rallying point and the hunting expedition was out,” he told the Jewish Telegraphic Agency in Haifa. They spotted only seven species, “but unlike the candidates, the flowers were all beautiful.”