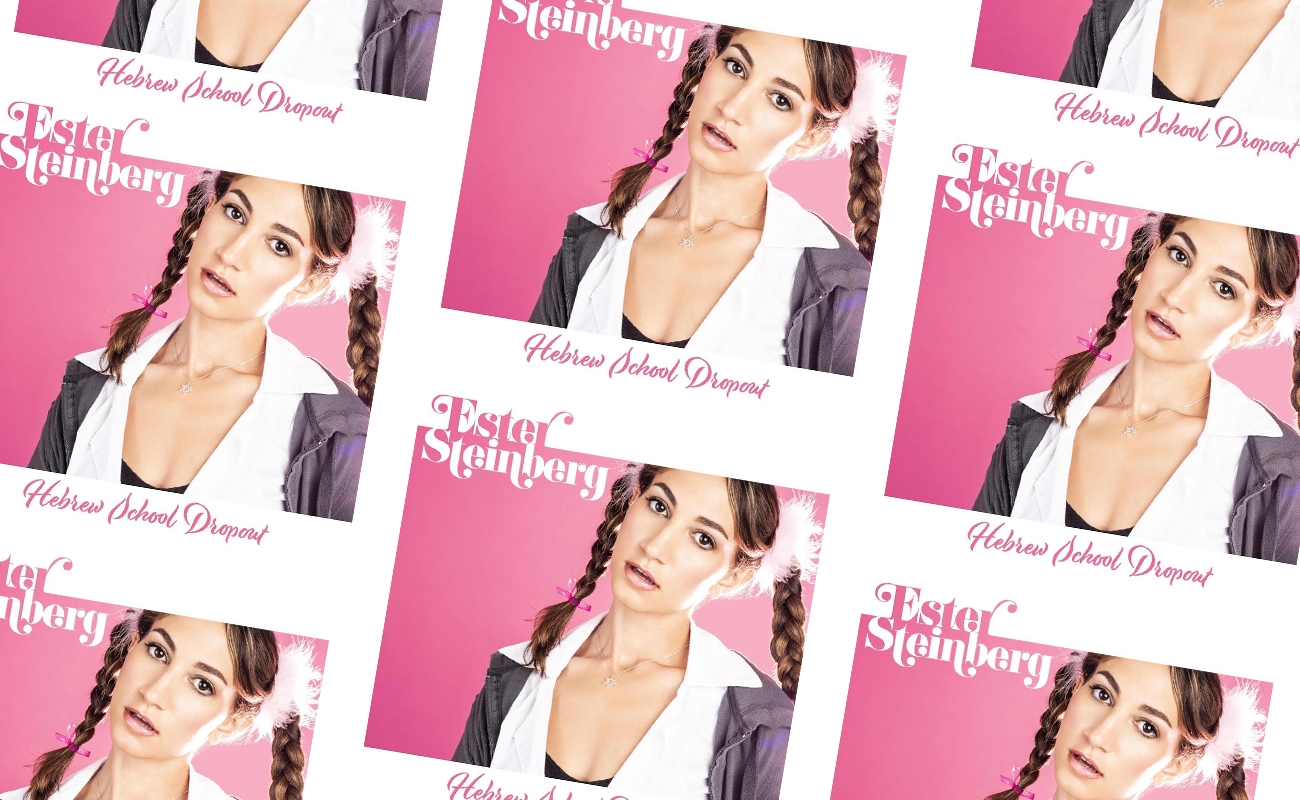 But make no mistake, if the silver Jewish star necklace didn’t tip you off, Steinberg isn’t portraying your average sexy schoolgirl — she’s a sexy Jewish schoolgirl.

Throughout the 22 tracks on “Hebrew School Dropout,” Steinberg, 29, throws shade at her parents, theater school students and men who get pee- induced boners (“What is that? A pee boner? That’s just insulting!”). Gathered from her best hits over the past decade, the Jewish stand-up’s album fluctuates between sex jokes and bits about weed, but during the 50-minutes of comedic gold, one theme remains stagnant — her Jewish identity.

Steinberg wants you to know she’s Jewish. But like, really Jewish. She’s so Jewish, she says on the opening track, that her name is on Schindler’s list twice. A Tampa native, Steinberg launched her comedy career performing stand-up on lunch tables at high school. A degree from New York University’s Tisch School of the Arts and a decade later, she now runs the very popular Kibitz Room Comedy Show at Canter’s Deli in Los Angeles (seriously, could she be more Jewish??) and splits her time between Brooklyn and L.A. with her Nice Jewish Fiance, Noah Gardenswartz, who writes for “Marvelous Mrs. Maisel” (can you say jackpot?). Most impressive, Steinberg made it onto our list of rising Jewish comedians that will make you pee your pants.

I caught up with Steinberg over the phone the day after her “Hebrew School Dropout” launch party to talk about everything from her crazy Israeli mother (her words, not mine), why Jewish girls make the best lovers and what actually pushed her to drop out of Hebrew school.

This is your first album! Mazel tov! I have to know, what was the final straw that made you drop out of Hebrew school, and why didn’t you originally want to have a bat mitzvah?

I was actually picked on a lot by annoying girls in Hebrew school. They did like a Spice Girls thing for the talent show, and I had to audition, but then I didn’t get it. And then finally they were like, you can be Scary Spice. The girls in general were just shitty and catty, and like, I wanted to go to a different school. I was happy about it, but I wasn’t averse to a bat mitzvah. I think I just wanted to be cool or hip, so my theme was Hollywood because I wanted to be an actress.

That worked out for you.

Yeah, I was like, I’m a Jewish girl who’s going to become a woman, and also, like, how can I start up my career in Hollywood? I was just one of those kids who was just living in the clouds. I was in Tampa, it’s a small, shitty city, and I just had these fantasies of leaving and going to New York, going to L.A., and just being a part of it all. I had to get out of Tampa, I was miserable there.

I did, and it was like … it hit my heart. It was just the greatest shit. I was obsessed.

You know the Spice Girls scene when Maya has to try out but is also forced to be Scary Spice? That’s essentially what happened to you.

Yes! I was like, they stole this from my brain. But it didn’t surprise me. Because it’s like catty little schoolgirls — for me, it was elementary school because I was younger — but it’s like, they were all doing the same shit. “Pen15″ is my favorite show.

A lot of your jokes are rooted in your Jewish identity. Have you ever faced anti-Semitism because of that?

Yes, for sure. I was doing a college gig at the National Association for Campus Activities (NACA). It’s hell on earth where you go to this big conference, and all the colleges have one representative, and they’re students, and they watch you perform, and they choose who they want to come to their college so you can make a lot of money. So I performed to get a booking, and afterwards I thought it was OK, but it was just such a mindf*** to perform in front of college students who are judging me. I was like, this is a nightmare, and you guys aren’t laughing. But I left being like, I did a good job.

I got a message that night that was like, “Hell is real, you’re going to burn in hell,” and it was clearly a student from NACA that watched me perform. I thought NACA would be the last place that you would see anti-Semitism. But at the same time, it’s like, these are 19-year-olds who are idiotic because they’re 19, and they can’t help it.

How did that make you feel?

Horrible! First of all, I was like, am I going to get any bookings? I was just worried about if I was going to make money, or lose money, and I was pretty young. I was like 22, only four or five years into comedy. But the amount of years in comedy doesn’t counteract the fact that you’re a 22-year-old performing for a 19-year-old. And I just wanted to be booked so bad so that I could pay bills, and then to get someone being like you’re going to burn in hell, you Israeli f***ing Jew … it was so devastating. The best way I decided to combat that is to be awesome. That’s the only way to stick it to the haters.

Haters gonna hate. So, I gotta know, the bits about your parents that aren’t flattering … how does that affect your relationship with them?

They love it. They think it’s funny. My dad was a stand-up comedian in the ’80s and he failed, so he brainwashed me to do comedy. He’s like, “Do anything for a laugh!” My mom is the same way. What’s really funny is that there were jokes about my sisters that weren’t nice. I have two sisters, and they’re both crazy. So I had these jokes about my crazy sisters, and my parents told me not to put them on the album. They were like, “Please, say whatever you want about us, but don’t start a war between your sisters.” It was a killed sacrifice, to be honest.

OK, we need to talk about the bit when you say you feel like a Bop It when guys go down on you. That was my favorite track on the album.

That’s so funny, I’m so glad. That’s one that I dug up and went to the graveyard of my jokes to get. I took out my shovel, like I had to dig it up from the retired vault.

What inspired that? Which guy made you feel like you were a Bop It?

For a while, I think in high school, I didn’t really want to have sex with people. I was like, you can go down on me, but then you’re 17, and the guy is going down on you, and he’s also 17, and then you’re 18, and you’re 19, and like, no matter what, even f***ing 40-year-old dudes don’t know what they’re doing. And I just remember getting the question: How do you like it down there? And I was like, um, yeah, I don’t know what to tell you? Like, I really want to help, but I can’t. Because I have no clue what to do. Like, I make tiny circles with my fingers, but I don’t know what you’re gonna do. I got very uncomfortable and awkward. I’m also terribly shy when it comes to telling people what to do. I’m not good in bed when it comes to like, using my voice. I’m not a girl who’s like, “Twist it! Pull it! Spin it! Bop it!” I’m very shy to say what I want. But I can say stop. Stop, stop, stop.

Well, I hope your fiance knows what he’s doing. Speaking of, your wedding’s coming up. Where’s it going to be? New York? California? Israel?

It’s actually going to be in Denver because his dad is very religious and has a very tight, close Jewish community there. He holds eight-hour seders. So it’s going to be kosher, mostly vegan, very traditional. We’re doing the tish bedekan, which is like this old school tradition where you check if it’s the right bride. And after the wedding there’s a room called the yehud room. This might be on my next album. It’s a place where, traditionally, the bride and groom go to consummate their marriage and have sex, but now in modern day it’s where they eat because there’s not a lot of time for them to eat later on. I was like, I don’t want this to foreshadow the rest of my life where I’m like, we could have sex but we don’t have time, so let’s just eat. So, I’m like, we’re not eating in that room. We are f***ing.

If the wedding is in Denver, does that mean you’re going to incorporate weed into it? I know you’re a big stoner.

Probably at the after-party. We talked about having a weed bar, and then we were like, no, we don’t want everyone stoned at the wedding. We can be stoned after. The after-party is going to be druggie — all drugs invited. We have like a nine-piece Motown band and a klezmer guy doing an hourlong hora. If my hora is not an hour long I’ll be very disappointed. My fiance  has a joke about how some people will try to get in the inner circle of the hora that aren’t even part of the family, and you gotta kick them out to the outskirt hora circle.

Your fiance writes for “Marvelous Mrs. Maisel,” and you were in an episode of the second season. What can you tell me about working on the show?

He was hired because of his stand-up. They were like, you’re funny, this show is about stand-up, we need you. But he’s being challenged to write in a way that’s not 2019 but 1950s comedy, which is so different. It was kind of a crapshoot, like, can this guy do it? Not only can he do it, they’re also using him to make phone calls to his uncle who’s a rabbi, and his sister who’s a Judaic studies teacher. He makes calls to them all the time to get the plot right. He did a lot of work on the Yom Kippur scene. He’s also helping them with plot points. This is Yom Kippur, people’s breath smell bad because they haven’t eaten. He’s being utilized for every possible thing in his life, including being engaged and spending every waking moment with a neurotic Jewish crazy woman. I tell people, oh yeah, my fiance writes jokes for a Jewish woman, and not me. His version of cheating on me is writing for Midge.

I watched the episode of “Pot Pies” where you cooked shakshuka, stoned. So I’m guessing that’s your favorite Jewish food, but I wanted to confirm.

Shakshuka’s up there, but anything with potatoes really. I could probably eat, like, 60 latkes.

Whitefish, tomatoes and onions on a whole wheat everything bagel because I’m trying to be healthy. People who don’t like whitefish, they’re missing out.

Yeah, I’ll take your word for it.