6 Jewish takeaways from the Mueller report 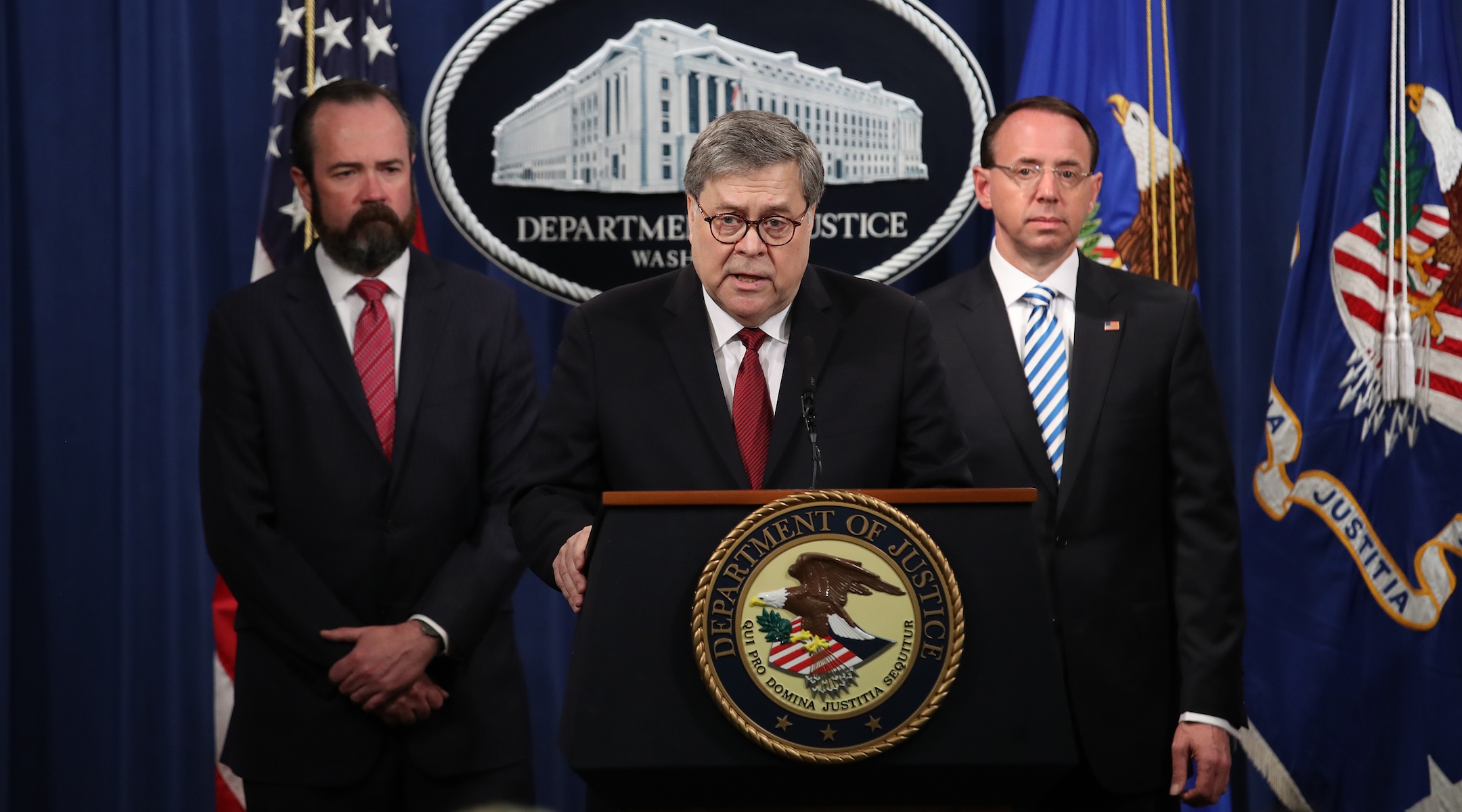 NEW YORK (JTA) — Special counsel Robert Mueller’s report about Russia’s interference in the 2016 presidential election was released to Congress and the public Thursday, adding new details to what had been disclosed about its findings by Attorney General William Barr when Mueller concluded his investigation last month.

The 448-page document, released after a nearly two-year long inquiry, says Mueller’s investigation did not establish the Trump campaign “conspired or coordinated” with the Russian interference effort, which was described as “sweeping and systematic.” The report drew no conclusion as to whether the president or his aides had engaged in obstruction of justice.

Trump was more than pleased by the findings, praising the report and tweeting several times “No Collusion — No Obstruction” on Thursday. As expected, Democrats did not share the view, with congressional leaders calling for Mueller to testify before the House of Representatives and the Senate.

The Jewish Telegraphic Agency combed through the report in search of Jewish links and tidbits. Here is what we found, including the story of an unusual gift that Jared Kushner received from the head of a Russian government-owned bank, the president talking about how he missed a former lawyer who was Jewish and how the transition team tried to influence a U.N. Security Council resolution on Israeli settlements.

The head of a Russian government-owned bank brought Kushner an unusual gift.

In November 2016, Russian Ambassador Sergey Kislyak requested a meeting with the president’s son-in-law and senior adviser, according to the report. Kushner agreed and two weeks later the meeting took place, with Flynn joining as well.

During the meeting Kushner said the incoming administration wanted “to start afresh with U.S.-Russian relations” and asked Kislyak for a contact close to Putin. In December, Kislyak asked for a second meeting, but this time Kushner wasn’t as eager, instead saying one of his assistants, Avi Berkowitz, could attend in his stead. During that meeting, Kislyak told Berkowitz that he had a contact in mind for Kushner: Sergey Gorkov, the chairman of the Russian-government owned Vnesheconombank bank.

Kushner met with Gorkov the next day. Seemingly eager to create a favorable impression, Gorkov brought with him two gifts. One, according to the report, was a painting. The other was a bag of soil from the town in Belarus where Kushner’s family came from. Though the report does not elaborate on the gifts or how they were received by Kushner, the dirt was likely from Navahrudak, where his paternal grandparents, Reichel and Joseph Kushner, lived. During World War II, the town was occupied by the Soviet Union and then Nazi Germany, which turned it into a ghetto. Conditions were bad and the Nazis would come in at will and kill people. Kushner’s grandmother escaped through a tunnel dug by Jews and lived in the woods for nine months with her sister and father.

The report talks about the U.N. Security Council vote that condemned Israeli settlement.

In December 2016, the transition team was concerned with an upcoming vote at the Security Council on a U.N. resolution condemning Israeli settlements, fearing — correctly, as it turned out — that the outgoing Obama administration would use the occasion to deliver a parting shot at an Israeli government with which it often disagreed. The report says that Trump and other members of the transition team were in touch with foreign government officials in an effort to get them to delay the vote or vote against the resolution. Kushner led the effort.

Former National Security Adviser Michael Flynn was in touch with Russia multiple times about the vote and asked Russia to vote against or delay it, but ultimately Kislyak said Russia would not do so. Trump was in touch with Egypt, which postponed the vote by a day, but ultimately voted in favor of the resolution like all the other members of the council, except the United States, which abstained.

Flynn would later plead guilty to lying to the FBI about his contacts with Kislyak regarding the Security Council resolution and other issues.

Mueller looked into whether George Papadopoulos acted as an Israeli agent.

In a section addressing whether any members of the Trump campaign were acting for foreign governments, it emerges that Mueller looked into whether George Papadopoulos, a former member of the president’s foreign policy advisory panel, acted on behalf of the Israeli government. Papadopoulos and his wife had both previously made claims to the media that Mueller had probed his ties with Israel. The report confirms their accounts.

“While the investigation revealed significant ties between Papadopoulos and Israel (and search warrants were obtained in part on that basis), the Office ultimately determined that the evidence was not sufficient to obtain and sustain a conviction under [the Foreign Agents Registration Act] or Section 951” of the tax code, the report reads.

Papadopoulos, a Greek-American former Trump adviser, spent 14 days in federal prison last year for lying to the FBI. He has said he met with two Israeli businessmen in 2017 over a “routine” investment proposal. (Papadopolous had shown an interest in Israel’s energy sector and in April 2016, just days after he was named to the Trump campaign, attended an energy conference in Israel.) Papadopoulos later accused the two men of trying to frame him. He said that an Israeli, George Tawil, introduced him to Shai Arbel, who co-founded the Israeli cyberintelligence company Terrogence, as part of a scheme to plant marked hundred dollars bills on him in order to incriminate Papadopoulos when FBI agents searched his luggage upon his return to the United States.

A Russia-born think tank CEO warned Kushner about not highlighting Russia during the presidential campaign.

From April 2016 until the election, Kushner was in contact and met with Dimitri Simes, the Russia-born CEO of the Washington, D.C.-based think tank Center for the National Interest. Simes, who advised Kushner on foreign policy, warned him about making sure Russia did not become an issue that could hurt Trump’s campaign.

The report also describes a meeting between the two men in August 2016, during which Simes “provided Kushner the Clinton-related information that he had promised.” The next few lines of the report, which describe the information, have been blacked out for “personal privacy.” However, it states that Simes had previously written in a memo to Kushner about information regarding what he called “a well-documented story of highly questionable connections between Bill Clinton” and the Russian government. Kushner forwarded that memo to senior campaign staffers with the message “suggestion only.”

On March 3, 2017, the day after then-Attorney General Jeff Sessions recused himself from the Russia inquiry, former White House counsel Don McGahn met with Trump, Chief of Staff Reince Priebus and chief strategist Steve Bannon in the Oval Office. The president was angry at the Sessions recusal, saying “I don’t have a lawyer,” and mentioning how previous attorneys general had protected the presidents under whom they served.

Trump then told McGahn that he wished he had Roy Cohn, the late Jewish lawyer and notorious political fixer — not to be confused with Michael Cohen, the Jewish attorney who also served Trump as a fixer – working for him. Priebus recalled that the president described Cohn as a winner and a fixer, that Cohn would win cases for him that had no chance, and that Cohn had done incredible things for him.

Kushner tried to stay in the room before Trump fired Comey.

At 4 p.m. on Feb. 14, 2017, following a Homeland Security briefing, Trump dismissed those gathered and asked to speak alone to FBI Director James Comey. Sessions and Kushner lingered, but the president “shooed them away,” along with Priebus, who had attempted to enter the room. In an interview with The New York Times on July 17, 2017, the president denied that he shooed anyone out of the room, and then deflected by asking his granddaughter Arabella Kushner, who had just entered the interview room, to say hello to the reporters in Chinese.

The Mueller report, however, concludes that “Despite those denials, substantial evidence corroborates Comey’s account.”