In Judaism, abortion is not a right – and pregnancy is a responsibility 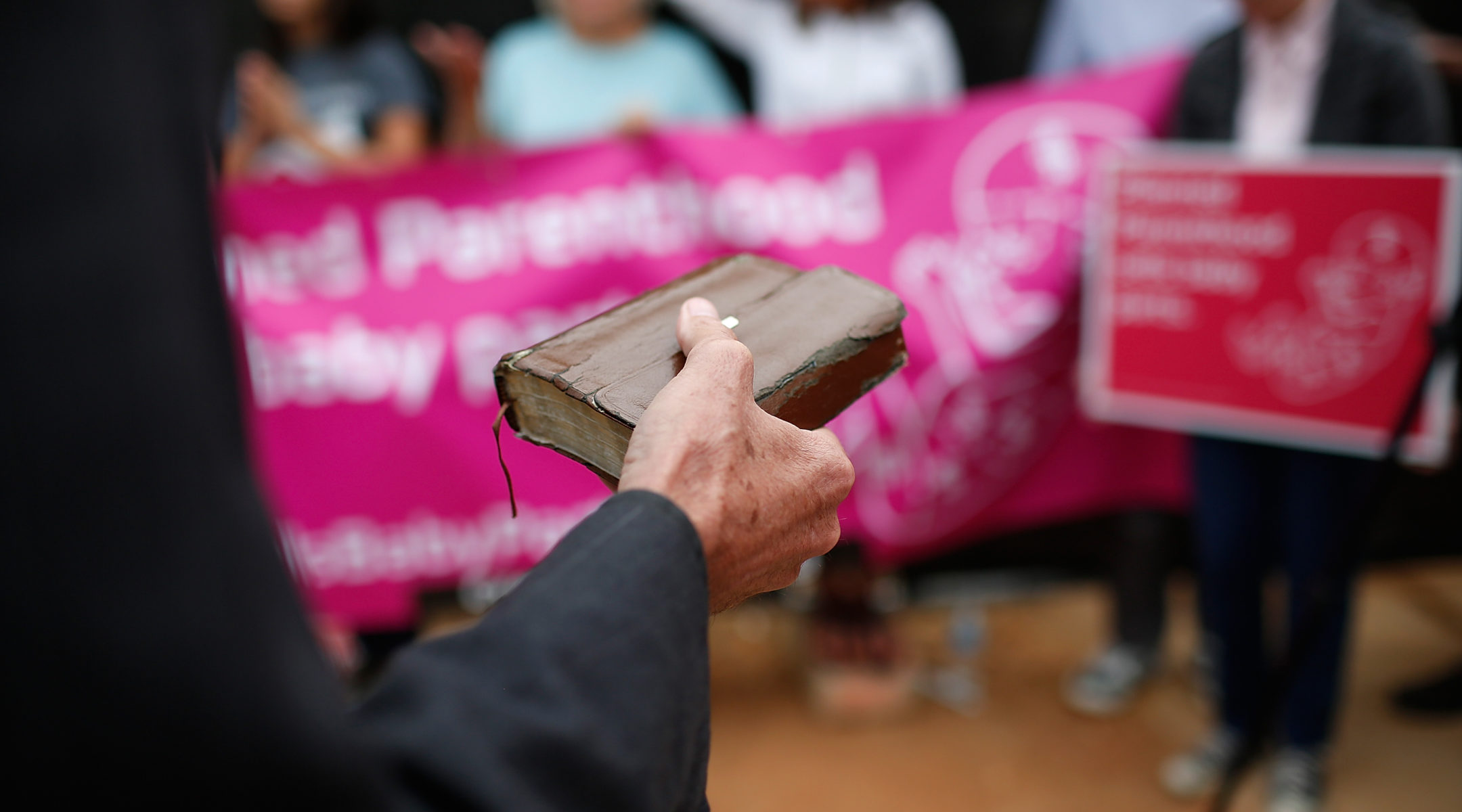 Right to Life advocates pray during a sit-in in front of a Planned Parenthood in Washington, D.C. (Win McNamee/Getty Images)
Advertisement

NEW YORK (JTA) — As in all life matters, when it comes to abortion, Judaism doesn’t speak of rights but of responsibilities and obligations. Seeing things through that lens can be a real eye opener.

The concept of “rights” is deeply ingrained in our Western minds. We rarely stop to question it. But the idea, as wonderful as it is and as helpful as it has been to humanity, doesn’t coexist very cozily with a fundamental Jewish truth: Everything benefiting us isn’t due us, but is rather a gift that we are charged to use responsibly in the service of something higher than ourselves.

We have no legal or moral claim on financial success, happy marriages, health or good fortune – no “right” to any of those things – in Jewish law or in the Bill of Rights.

In addition to having no right to such things, Judaism also teaches that we have a fundamental obligation to act responsibly toward others.

While the much-invoked aphorism “the right to swing my fist ends where the other man’s nose begins” may well reflect the American legal approach, Judaism sees the assailant who doesn’t stop at a nose not as having violated the nose-owner’s rights, per se, but as having incurred a responsibility – an obligation to pay for the damage, pain, medical bills, missed work and embarrassment that the fist owner has wrought. It’s a subtle but important distinction.

Which brings us to Jewish religious law’s stance on abortion. As in many areas of halacha, it is complex: There are a variety of approaches, situations and opinions. A good overview of the halacha of abortion was written recently for JTA by nurse practitioner Ephraim Sherman. But a compendium of sources and applications cannot touch the core issue, the one that should be a game changer for Jewish-minded Jews: responsibility.

Abortion, in Jewish law, is not a right. In the vast majority of cases it’s actually a wrong. But even in cases where it is permitted or required, as when a Jewish mother’s life is endangered, even indirectly (or, although the matter is hardly free of controversy, according to some respected rabbinic opinions when the pregnancy seriously jeopardizes the mother’s health), the decision to terminate a pregnancy is not a question of a woman’s right to choose but of her responsibility to choose correctly, her obligation to do what halacha counsels in her particular case, whatever that may be.

And so, from a Jewish perspective, all the constitutional, judicial and philosophical issues whacked back and forth across the tennis court of public discourse are beside the main point.

It’s not the stage of pregnancy that ultimately matters and not the “status of a fetus.” Not “ensoulment” and not the specter of looming back-alley abortionists. What counts alone in Judaism is the responsibility to do what Jewish law requires in any particular case.

Most reasonable people on both sides of the perennial abortion debate would like abortion to be rare. Currently, although the abortion rate in the U.S. has dropped somewhat in recent years, it is very far from uncommon. The predominant reasons for seeking an abortion, according to a 2013 U.S. National Library of Medicine-National Institutes of Health survey, have been financial (40 percent), timing (36 percent), partner-related reasons (31 percent) and the need to focus on other children (29 percent).

From a “rights” perspective, all such justifications are perfectly acceptable. From a “responsibility” perspective, though, not so much. In fact, not at all. Halacha considers a potential life to trump most other concerns.

There is, of course, no reason why Jewish theology should be embodied in American jurisprudence. But Judaism’s stance happens to reflect the feelings of a majority of Americans. A 2018 Gallup survey found that only 29 percent of respondents believed abortion should be legal in all circumstances.

Blanket bans on abortion, to be sure, would deprive Jewish women of the ability to act responsibly in cases where abortion is halachically required. And so, what Orthodox groups like Agudath Israel of America, for which I work, have long promoted is the regulation of abortion through laws that generally prohibit the unjustifiable killing of fetuses while protecting the right to abortion in exceptional cases.

In the end, while abortion in Judaism’s eyes may not be a matter of “rights,” it is indeed a matter of “choice,” a word much invoked in the abortion debate and central to all aspects of human life.

Not “choice” in the sense of “all choices are equal,” but rather in the sense conveyed by the word as it is used in Deuteronomy.

“I have placed before you,” God informs us through Moses, “life and death, the blessing and the curse.”

“Choose life,” the verse continues, “so that you and your offspring will live.”