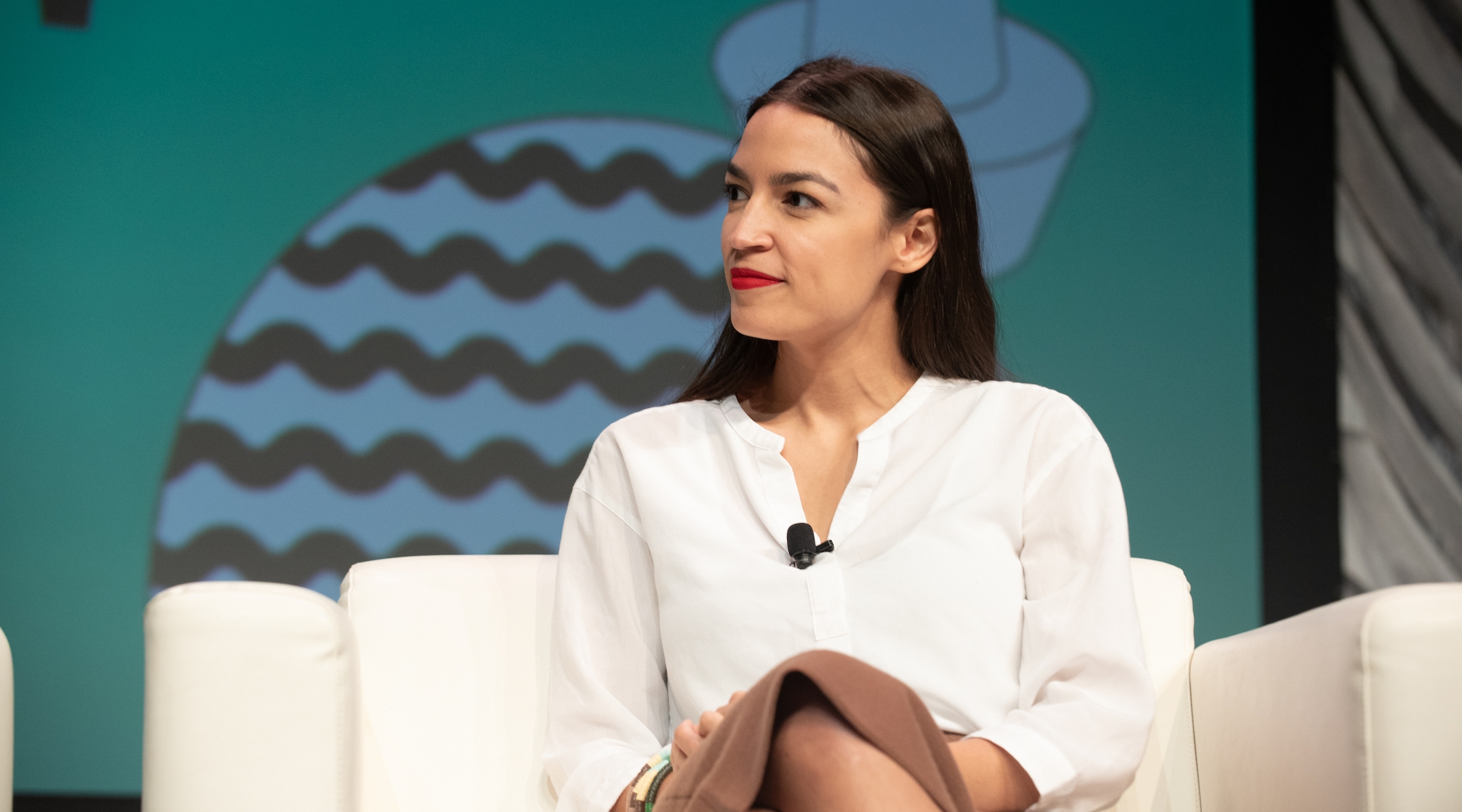 Alexandria Ocasio-Cortez is interviewed at the SXSW Conference and Festival at the Austin Convention CTexas, March 9, 2019. She has compared the detention centers for migrants at the U.S.-Mexico border to World War II-era concentration camps. (Jim Bennett/WireImage/Getty Images)
Advertisement

“The U.S. is running concentration camps on our southern border, and that is exactly what they are,” the freshman New York Democrat said Monday night in an Instagram Live video. “If that doesn’t bother you … I want to talk to the people that are concerned enough with humanity to say that ‘never again’ means something.”

“This administration has established concentration camps on the southern border of the United States for immigrants, where they are being brutalized with dehumanizing conditions and dying,” she wrote. “This is not hyperbole. It is the conclusion of expert analysis.”

This administration has established concentration camps on the southern border of the United States for immigrants, where they are being brutalized with dehumanizing conditions and dying.

This is not hyperbole. It is the conclusion of expert analysis ⬇️https://t.co/2dWHxb7UuL

Ocasio-Cortez then linked to an Esquire article quoting Andrea Pitzer, author of “One Long Night: A Global History of Concentration Camps.” Pitzer asserts, as she did in an interview with JTA last year, that what the government calls federal migrant shelters or detainment facilities fit her definition of concentration camps: “mass detention of civilians without trial.”

“Six million Jews were killed in the Holocaust. It is disgraceful for Rep. Alexandria Ocasio-Cortez to compare our nation’s immigration policies to the horrors carried out by the Nazis,” the Republican Jewish Coalition said in a statement. “We would hope that Rep. Ocasio-Cortez knows better, but sadly she does not.”

Rep. Liz Cheney, R-Wyo., joined the condemnation, tweeting at Ocasio-Cortez, “do us all a favor and spend just a few minutes learning some actual history. 6 million Jews were exterminated in the Holocaust. You demean their memory and disgrace yourself with comments like this.”

Please @AOC do us all a favor and spend just a few minutes learning some actual history. 6 million Jews were exterminated in the Holocaust. You demean their memory and disgrace yourself with comments like this. https://t.co/NX5KPPb2Hl

The Democrat fired back.

“Hey Rep. Cheney, since you’re so eager to ‘educate me,’ I’m curious: What do YOU call building mass camps of people being detained without a trial?” Ocasio-Cortez tweeted. “How would you dress up DHS’s mass separation of thousands children at the border from their parents?”

“Whether we call them concentration camps, mass detention centers, or cages for children, they are a moral abomination,” its CEO, Stosh Cotler, said in a statement. “The real question is not what we call these mass detention sites growing all over the country, the question is: what is every government official and citizen doing to stop this evil? Our government is scapegoating, demonizing, and terrorizing immigrants. These policies echo the worst of Jewish history and the worst of American history. Anyone distracting from these clear facts with manufactured outrage is subverting Jewish history and trauma, and that is shameful.”

The terms, said the policy group, “are synonymous with and evocative of the atrocities committed by Adolf Hitler’s Nazi Germany in which 6 million European Jews were systematically denied civil and human rights due to their race and ultimately murdered in a state-sponsored genocide.”

The statement added: “As concerned as we are about the conditions experienced by migrants seeking asylum in the United States, including family separation, unusable facilities, and lack of food, water and medical resources, the regrettable use of Holocaust terminology to describe these contemporary concerns diminishes the evil intent of the Nazis to eradicate the Jewish people.”

On average, 50,000 people are bring held in more than 200 detention centers across the country, including county jails and privately run facilities. Those in U.S. Immigration and Customs Enforcement custody include asylum-seekers, those awaiting deportation or court dates and those in custody for civil immigration violations such as overstaying their visas or being in the country illegally.

According to ICE, “an aggressive inspections program … ensures its facilities follow ICE’s National Detention Standards.” The standards “ensure that detainees in ICE custody reside in safe, secure and humane environments and under appropriate conditions of confinement.”

Immigrant advocates like the American Civil Liberties Union say many of the facilities do not meet those standards. “Immigration detention poses life-threatening health and safety risks for the tens of thousands of people who are locked up across the country,” asserts Victoria López, senior staff attorney for the ACLU’s National Prison Project.

The debate has been clouded by the conflation of the phenomenon of concentration camps, which predate the Holocaust, and the death camps run by the Nazis. Scholars draw a distinction between temporary measures instituted by authoritarian regimes and the permanent dehumanization and extermination of classes of people under the totalitarian Nazis.

Pitzer also told JTA last year that the term concentration camp is valid if Trump officials have described the detention policy as a deterrent, as opposed to an emergency measure to deal with a new problem or a massive influx of migrants.

Holocaust scholars, meanwhile, urge caution when making Holocaust comparisons or using terminology most commonly associated with the Nazi era. Edna Friedberg, a historian at the U.S. Holocaust Memorial Museum, made the point in a December essay.

“Careless Holocaust analogies may demonize, demean, and intimidate their targets. But there is a cost for all of us because they distract from the real issues challenging our society, because they shut down productive, thoughtful discourse,” she wrote.

“At a time when our country needs dialogue more than ever, it is especially dangerous to exploit the memory of the Holocaust as a rhetorical cudgel. We owe the survivors more than that. And we owe ourselves more than that.”