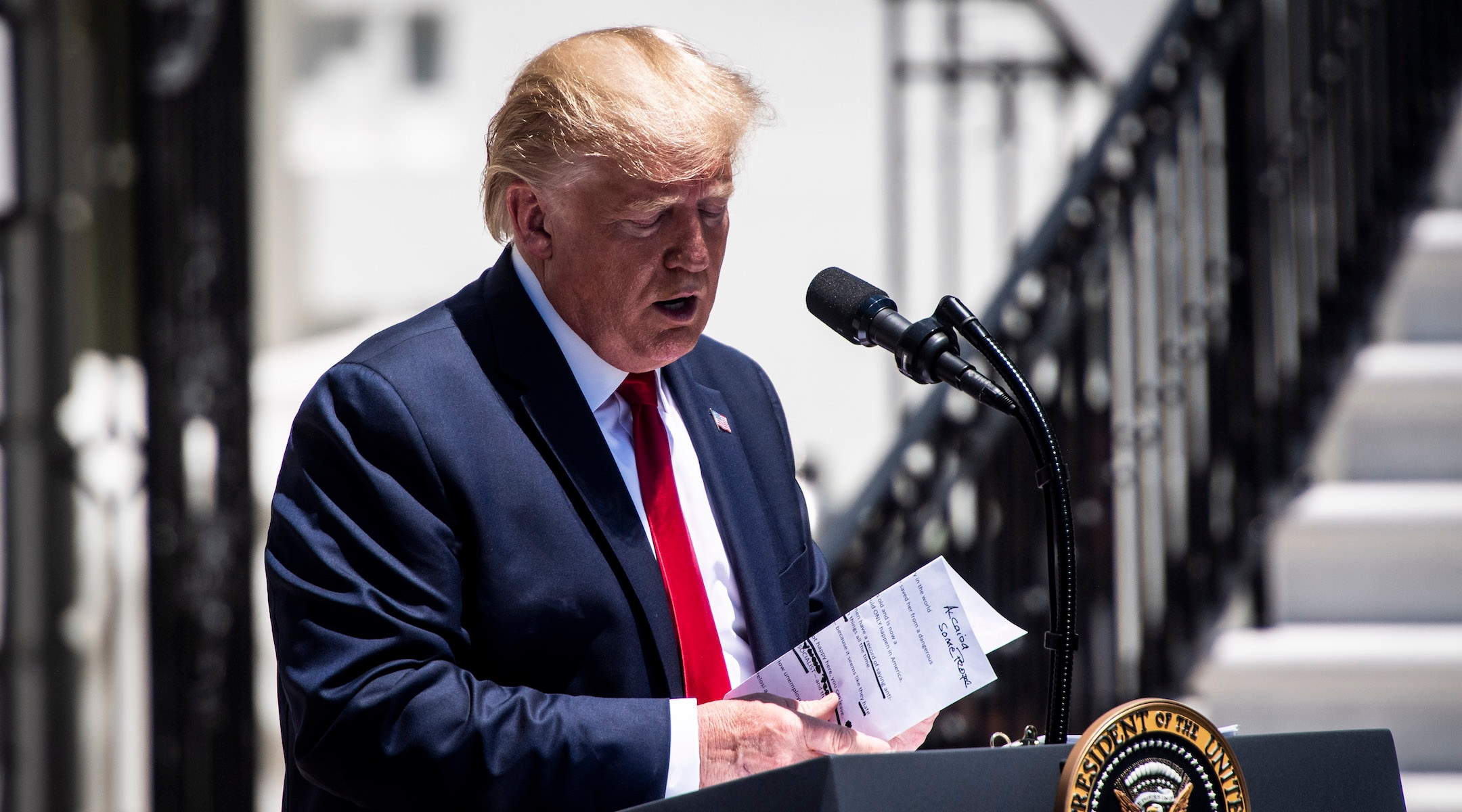 WASHINGTON (JTA) — It would have been remarkable in any administration: a Summit on Combating Anti-Semitism with appearances by some of the president’s top guns, including the secretary of the Treasury, the secretary of Education and the FBI director. And all hosted by and presided over by the attorney general.

That was the lineup at Monday’s all-day seminar at the Justice Department, and the turnout was appreciated by the Jewish professionals and lay leaders in the room, no matter what else they thought about President Donald Trump. Here was an entire day devoted to what that attorney general, William Barr, called “a marked increase in reported instances of anti-Semitic hate crimes.”

In his remarks, he more than any other speaker in a day of speeches described the full range of threats facing Jews: “gunmen motivated by hatred against Jews,”  people “attacking Jews in the streets and vandalizing synagogues,” “harassment of Jewish individuals and businesses” and a “sharp uptick in attacks on Orthodox Jews, particularly in the Crown Heights neighborhood.”

And then there was “the problem of anti-Semitism on campus,” which along with the boycott Israel movement turned out to be perhaps the main focus of the panel discussions that followed.

“On college campuses today, Jewish students who support Israel are frequently targeted for harassment, Jewish student organizations are marginalized, and progressive Jewish students are told they must denounce their beliefs and their heritage in order be part of ‘intersectional’ causes,” Barr said.

Many Jews on the left bristle at this emphasis, suggesting that the focus on campuses and the spate of anti-BDS laws are veiled attempts to silence pro-Palestinian sentiment by casting it as hate speech. But the summit audience, like nearly all of the panelists, seemed to share a worldview that ranged from centrist to conservative. They might argue among themselves whether the Boycott, Divestment and Sanctions movement or white supremacy is worse, but on the whole agree that there is a “crisis” on campuses led by a movement that “attempts to disguise its Jew hatred as hatred for the State of Israel and the anti-Zionist endeavor” (as the State Department’s anti-Semitism envoy, Elan Carr, said in his remarks).

The tight linkage of Jewish and pro-Israel concerns reflects a mainstream Jewish project going back decades that sees American Jewish identity closely bound up with support for (and attacks on) Israel. And probably no administration has done more to work that connection into both its domestic and foreign policy. In their remarks, both Secretary of the Treasury Steve Mnuchin and Secretary of Education Betsy DeVos spoke of Trump’s decision to move the U.S. Embassy to Jerusalem from Tel Aviv. Fighting anti-Semitism is supporting Israel, and supporting Israel means fighting anti-Semitism, was the unmistakable message of the day. 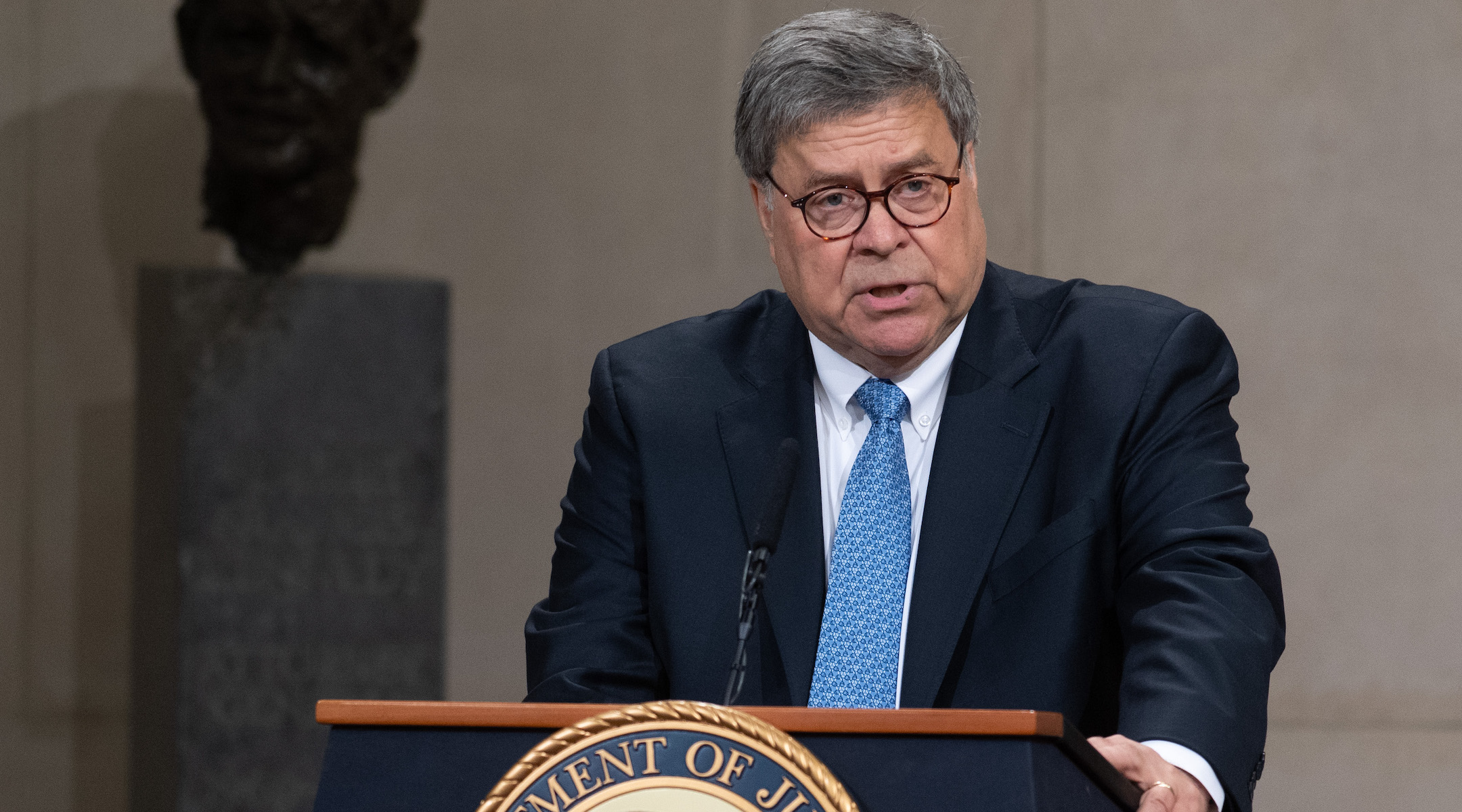 Attorney General William Barr speaks at the Summit on Combating Anti-Semitism at the Department of Justice in Washington, July 15, 2019. (Saul Loeb/AFP/Getty Images)

Under any other president, in perhaps any other era, this lashing together of Jewish and Israel interests would have been seen by the Jewish mainstream as hugely validating. But events happening outside of the summit have some saying “Be careful what you wish for.”

Trump’s attacks on four liberal congresswomen of color, telling them to “go back” to their ancestral countries (only one was born outside of the United States) was exactly the kind of bigotry that the summit was devoted to combating. If you doubt that, imagine if the president — any president — had lobbed that remark at a Jewish lawmaker. “Dual loyalty” is a slur closely associated with Jews, but that doesn’t mean it can’t be used to attack any immigrant, ethnic or religious group. Bigotry is bigotry, even if you think the target has said things that were just as bad.

Trump, er, complicated things further by dragging Israel into the mess he manufactured. In defending his remarks, he laid the blanket charge that all four of his targets “hate Israel with a true and unbridled passion.” One of them, Rep. Ilhan Omar, D-Minn., “says horrible things about Israel, hates Israel, hates Jews,” he said later.

Some, of course, welcomed Trump as a defender of the Jews against the harshly anti-Israel things Omar has said. That includes Sen. Lindsey Graham, R-S.C., who said of all four women, “They accuse people who support Israel of doing it ‘for the Benjamins.’ They’re anti-Semitic. They’re anti-America.” The Republican Jewish Coalition shared Graham’s remarks enthusiastically.

But others saw danger when a president defends his bigoted rhetoric by invoking Israel and anti-Semitism.

“I was disturbed by the president’s weaponization of people’s indignation about anti-Semitism from some of these women to cloud the accusations of racism against him,” Deborah Lipstadt, a professor of Jewish history and Holocaust studies at Emory University, told The Washington Post.

With its own right-wing government and a moribund peace process, Israel is not exactly popular on the center-left (let alone the anti-Israel far left, which would love to gain more recruits). The Democrats bear some of the blame for the liberal drift from Israel. But it can’t be good for Israel and its case for it to be so closely associated with the most polarizing president in anyone’s memory, especially when he invokes it to defend behavior even a small but growing segment of his own party considers out of bounds.

I heard Trump’s Israel remarks in defense of his “go back” tweet and thought of Tevye’s lament: “I know, I know. We are Your chosen people. But, once in a while, can’t You choose someone else?”

Trump’s remarks and divisive behavior hardly came up during the anti-Semitism summit, as exactly no one expected they would. Still, in Barr’s remarks you could hear a conventional vision of tolerance that Trump in no way seems to embrace.

“We are a pluralistic nation composed of very distinct groups, each bound together by ethnicity, race, or religion – each group proud of its identity and committed to its faith and traditions,” he said. “Yet despite these differences, we can be bound together into a broader community. Not one that seeks to grind away our distinctive identity. Not one that seeks to overbear our religious commitments, which must be paramount. But one that respects, indeed delights in, the freedom of each of us that give meaning to our lives – that help us understand our place and our purpose in this Creation.

“This real sense of community cannot be politically mandated. It arises from the genuine affinity, affection and solidarity that grows out of a shared patriotism and that spontaneous feeling of fellowship that arises from a shared sense of place, shared experience and common local attachments. These bonds are the surest safeguard against racial hatred, including anti-Semitism.”