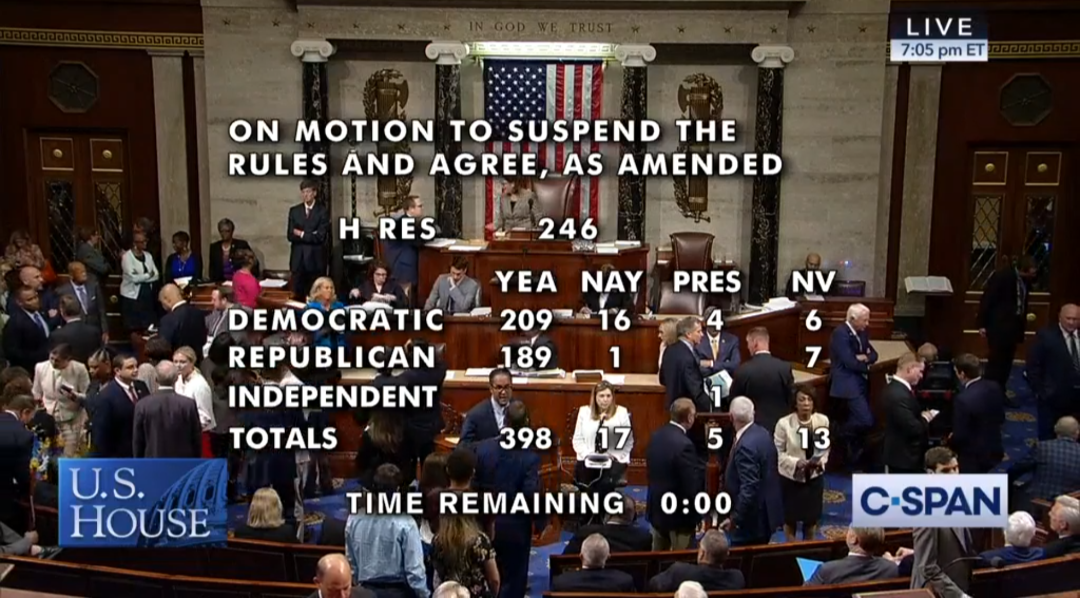 A screenshot of C-Span at the end of a tally of a U.S. House of Representatives vote to condemn the boycott Israel movement, July 23, 2019.
Advertisement

The House vote Tuesday on the non-binding resolution was 398-17. Opposing were 16 Democrats, including two who back BDS, Reps. Rashida Tlaib of Michigan and Ilhan Omar of Minnesota, and one Republican, Thomas Massie of Kentucky.

The resolution, backed by the American Israel Public Affairs Committee, also enshrines the two-state outcome to the Palestinian-Israeli conflict at a time that the Trump administration and Israel’s government have retreated from the concept.

Additionally, it says Americans have a right to petition in opposition to government policy, a nod toward some Democrats who oppose separate legislation that penalizes Israel boycotts because, they say, such penalties impinge on speech freedoms.

Rep. Brad Schneider, D-Ill., one of the resolution’s lead sponsors, told the Jewish Telegraphic Agency that bringing a vast majority of the House, including virtually the entire GOP caucus, on board in backing two states was a major achievement. The Republican Party abandoned two states in its 2016 platform.

“It is an important statement that the United States is committed to a negotiated two-state solution to ensure that Israel is Jewish and democratic,” Schneider said in an interview.

Rep. Lee Zeldin of New York, one of two Jewish Republicans in the House, was the lead GOP sponsor of the resolution.

Republicans continued to press for the Democratic-led House to pass separate legislation already approved by the Senate that would protect states that penalize boycotters.

“We take a first step today by publicly acknowledging BDS is dangerous and anti-Semitic,” said Rep. Michael McCaul, R-Texas, the senior Republican on the House Foreign Affairs Committee, who authored the House version of the Senate bill. “But tomorrow we must take real actions — and advance the real policies in my bill — to protect Israel and combat the BDS movement.”

Rep. Josh Gottheimer, D-N.J., who has backed tough anti-BDS penalties, cautioned against pushing too hard on the other bills, a sign that centrist Democrats are not soon going to join a Republican maneuver to bring the tougher bills to a vote against the wishes of the Democratic leadership.

“When you get something, don’t immediately put your hand out for more,” Gottheimer, who leads a group of centrist Democrats, told JTA. “We should appreciate the importance and significance of today and of course keep fighting.”

Schneider, who is Jewish, said the passage of the anti-BDS resolution made clear that opposition to the movement was a consensus issue. “I spent the last four months working with my colleagues so they understand the purpose of” the resolution, “what impact it will have in our [Jewish] community and promoting peace in the Middle East,” he said.

Also passed in the House Tuesday was legislation initiated by Reps. Ted Deutch, D-Fla., and Joe Wilson, R-S.C., that codifies the $38 billion over 10 years in defense assistance that the Obama administration announced in the last months of 2016. Writing the assistance into law keeps any current and future presidents from walking it back. The Senate passed a similar measure.

The House bill also removes a recent major hindrance to financial assistance to the Palestinians. A law passed last year that allows victims of terrorism who have won lawsuits against the Palestine Liberation Organization to seize Palestinian assets in the United States has led the Palestinian Authority to refuse all U.S. assistance.

“AIPAC applauds the House of Representatives for adopting three bipartisan measures that strengthen the U.S.-Israel relationship,” the lobby said in a statement.

The Zionist Organization of America dismissed the anti-BDS resolution as toothless, objecting particularly to its endorsement of a two-state solution, which it has long opposed.