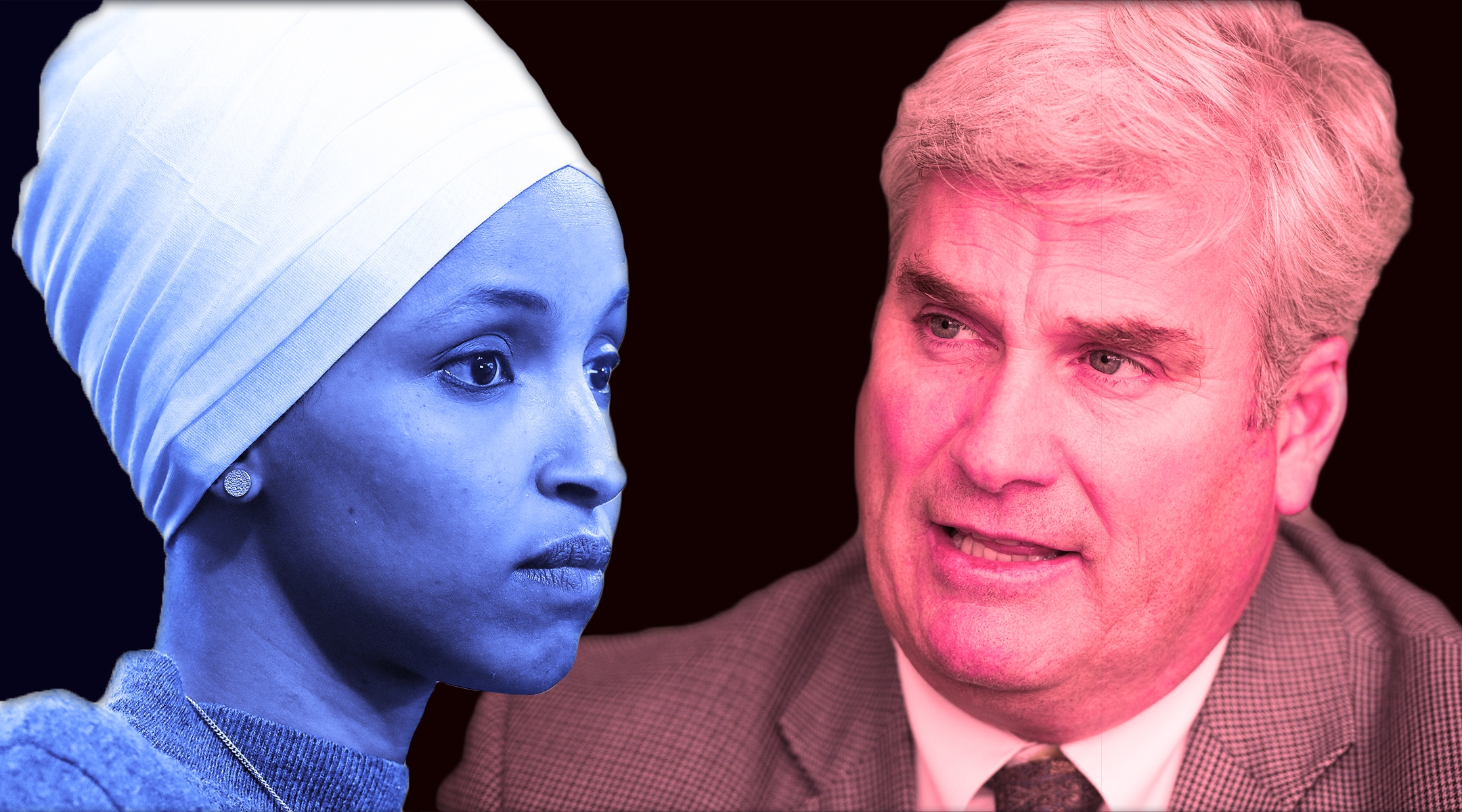 The divergent responses to anti-Semitism coming from Reps. Ilhan Omar, a Democrat, and Tom Emmer, a Republican, tell us a lot about America, writes law professor David Schraub.
Advertisement

Many in the Jewish community contended that this was anti-Semitic verbiage. They are correct. But it is worth exploring how this anti-Semitism controversy, encompassing a prominent and powerful Republican, has developed in comparison to those which have dogged that other Minnesota congressional representative, Rep. Ilhan Omar.

We must begin by addressing what has by now become a ritual: the proclamation from some Jews, speaking “as Jews,” that the anti-Semitism allegation is false, ridiculous, a lie, a smear. In Emmer’s case, this role was filled by Rabbi Hershel Lutch, a personal friend of Emmer’s who accompanied the congressman on a 2016 visit to Israel.

On the trip, Lutch reported in a Jewish Telegraphic Agency opinion piece that Emmer expressed care and concern about the Israeli state and its security. He shed tears at Yad Vashem and thoughtfully dialogued with Rabbi David Lau about the future of Jewish education in America.

“These are not the actions of an anti-Semite,” Lutch insisted.

“By falsely flagging conduct as anti-Semitic,” he continued, “we lose our ability to stay focused on combating the very numerous and extant threats of anti-Semitism — and, importantly, we lose our credibility to define and identify them.” And “[b]y raising the specter of anti-Semitism against our community’s friends, we inadvertently alienate our closest allies.”

I confess to finding this litany darkly amusing. How often have we heard our complaints of anti-Semitism met with accusations of political opportunism? How frequently has it been whined that “any criticism” or “all conduct critical” of Jews or Jewish institutions (including Israel) is now deemed anti-Semitic? How regularly are the inevitable Jewish friends trotted out to grant absolution, to tell us we should be ashamed of alienating allies with our spurious allegations?

But the case for Omar and Emmer’s challenged comments being anti-Semitic does not depend on asserting awful, corrupt motives or hatred of Jews, which I am sure they do not hold, nor is it falsified by each of them having Jewish friends and allies, which I am sure that they do possess. In both cases, it rests not on a ridiculous assertion that all “criticism” of a Jew is anti-Semitic, but rather on a tailored understanding of how their comments leveraged a particular history of an anti-Semitic portrayal of Jewish power.

Specifically, Emmer’s anti-Semitism lies in his use of the trope of a plutocratic Jewish conspiracy that has the American political establishment “bought and paid for,” stealing our national sovereignty from patriotic “Main Street” Americans and placing it in the hands of wealthy globalist financiers. It’s not as if this is particularly obscure; Lutch presumably understood its anti-Semitic roots well enough when Omar spoke of AIPAC’s “Benjamins.”

Anti-Semitism primes people to accept — and violently rebel against — the premise that the rootless international Jew has stolen control of “their” land, their property, their culture and their government. And there is a straight line between this sort of rhetoric and the very real white supremacist violence that’s getting Jews killed. In the white nationalist imagination, there is an “invasion” of immigrants coming to destroy White American culture. And they are convinced that invasion is being orchestrated by Soros, Bloomberg and their wealthy (((globalist))) friends who have successfully purchased control over the American political establishment.

This is the logic that links Charlottesville (“Jews will not replace us”) directly to Pittsburgh (motivated in part by fury at Jewish support for immigrant rights) to Poway to the pipe bombs that showed up at Soros’ house. And these, in turn, are impossible to disassociate from broader white supremacist violence from Christchurch to El Paso. With each invocation of “globalists” and “cosmopolitan elites,” each “sheriff’s star” logo or jeremiad against “cultural Marxism,” each conspiracy theory about how Bloomberg has bought off Congress or how caravans of migrants to America are a Soros-funded plot, this hatred burrows deeper into the American psyche.

Does Tom Emmer endorse violence against Jews? I am quite confident he does not. But anti-Semitism appears in many forms, and the biggest and most dangerous mistake that has overtaken our collective understanding of anti-Semitism is believing it to be exclusively the province of snarling monsters whose sole motive is promoting Jewish pain.

Anti-Semitism does not always emerge from hate. It can equally manifest through negligence, recklessness, ignorance, laziness, opportunism and more. As a result, anti-Semitism — like racism, like misogyny, like Islamophobia, like all ideologies of oppression — can and often does appear even in persons who have Jewish friends, who are appalled by the Holocaust, who would never think of themselves as hateful persons and who imagine themselves to want nothing but the best for all Americans of any faith or creed.

Yet while the case for Emmer’s letter being anti-Semitic is structurally quite similar to the case against Omar, there was a visible difference in how the two were treated. The comparatively muted reaction to Emmer’s letter stands in stark contrast to the weeks upon weeks of breathless histrionics over Omar.

There has been no insistence on any congressional resolutions condemning Emmer, no demand that he be stripped of his committee assignments. Minnesota Jewish groups are still organizing marches targeting Omar, but these “nonpartisan” affairs seem unlikely to turn their reticles onto Emmer (or his Minnesota colleague Rep. Jim Hagedorn, who similarly accused his Democratic opponent of being “owned” by Soros and also once suggested that Joe Lieberman only backed the Iraq War because he was a “Jew”). Even those Jewish figures who have raised their voices in reproach have done so in the gentlest terms, racing to confirm that despite his unfortunate choice of words, Emmer is and remains a “good friend to the Jewish community.”

Omar could only wish for such deferential treatment. But there’s another difference between Emmer and Omar that to my mind is even more revealing. In response to Jewish protests — ones that have been leveled repeatedly and consistently by the Jewish community for years now — Emmer, like virtually all other Republican figures who have dipped into the Soros well, has defiantly refused to apologize.

While a Jewish Community Relations Council official indicated that he had asked Emmer to “refrain … from the recitation of ‘George Soros, Tom Steyer, and Michael Bloomberg,’” Emmer has given no indication he will accede to the request. Instead, a spokesperson for the National Republican Congressional Committee thundered back, insisting that “there is nothing anti-Semitic about drawing attention to billionaire donors and who they are giving money to.” Emmer, for his part, has spoken of giving the NRCC a “mandate to be ruthless.”

In this, Emmer is a man of his party. In response to continued pleading insistences by the Jewish community that the conspiracy-mongering around Soros is dangerous, hurtful and threatening, Republicans have presented a united front in absolutely, positively refusing to care. If, as the saying goes, the opposite of love isn’t hate but indifference, then the past few years have shown there to be no love lost between the Republican Party and the Jewish community.

Omar, for her part, at least tried to apologize. She spoke powerfully about her own need to check her biases and listen seriously when members of another community communicated that she was hurting them.

Certainly it has been an uneven effort, and Omar has not fully followed through. But increasingly, figures like Omar and the Democratic Party are punished because they try — however painful it is — to listen and adjust. However much or little you credit Omar’s efforts, surely they must compare favorably to Emmer’s flat refusal to engage at all.

Yet in practice, politicians like Emmer and his fellow Republicans are rewarded for their arrogant refusal to listen to the Jews. Somehow their refusal to even dignify Jewish testimony with a response redounds in their favor. Omar apologizes, at least partially, and is not forgiven. Emmer does not even gesture at an apology and nonetheless expects absolution as if it were his birthright.

It has to stop. For all their protestations that they are friends and allies of the Jews and the primary bulwark against the forces of anti-Semitism today, American conservatives continue to demand that they be graded on a massive curve, where a few nice words about Israel earns them a complete get-out-of-anti-Semitism-free card in America.

It doesn’t. American Jews care about Israel and its well-being. But we live in America, and asking us to excuse threats and provocations against Jews here because one adores Jews when they’re two continents and 6,000 miles away is disrespectful to us both as Jews and as Americans.

Simply put, if Tom Emmer is half the ally to the Jewish community that people like Rabbi Lutch insist that he is, he’d be willing to listen to the overwhelming consensus among the American Jewish community that the continually centering of Jews as part of a wealthy cabal of globalists seeking to destroy America is anti-Semitism — full stop. In this climate, it is pouring gasoline on a fire that’s perilously close to becoming an inferno.