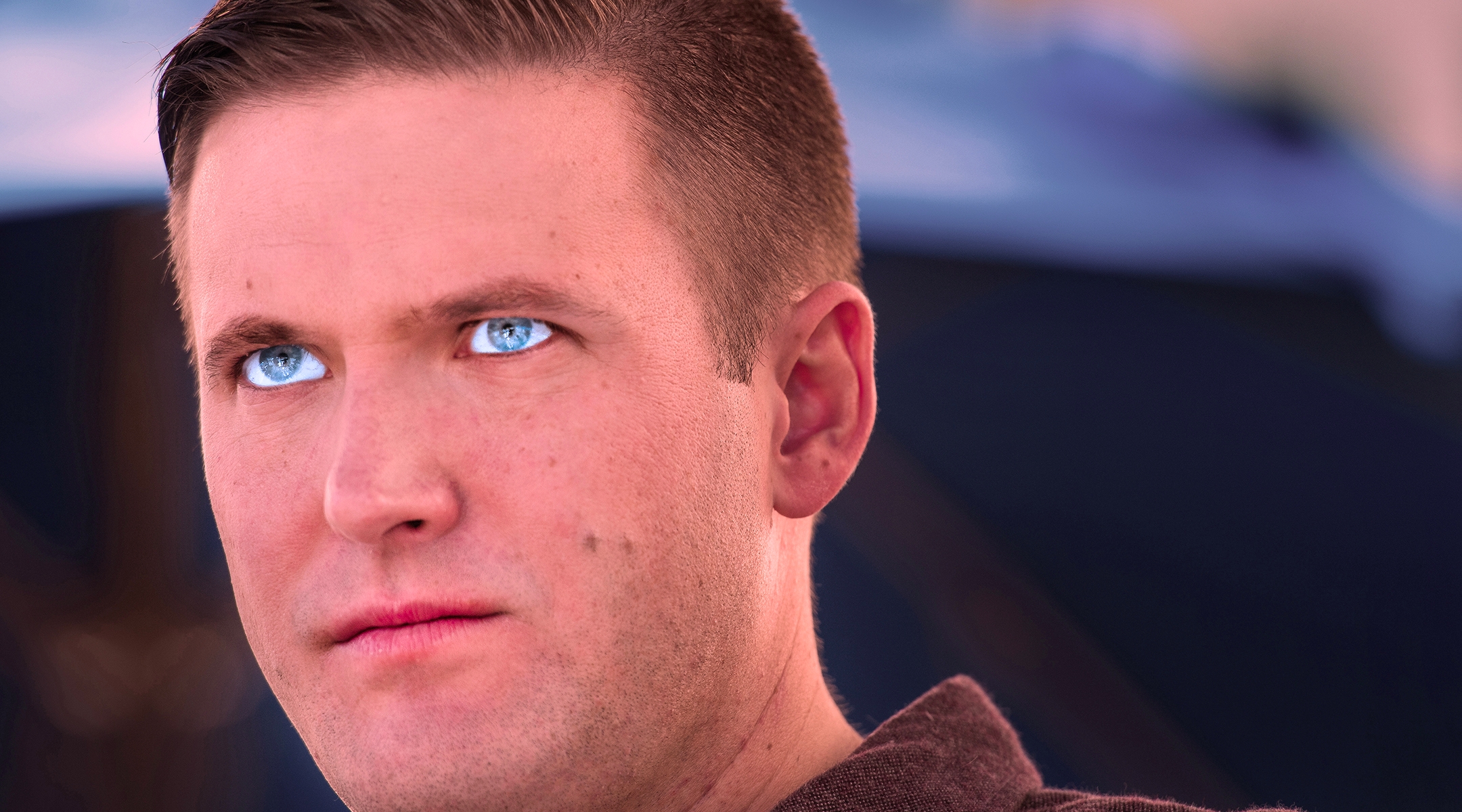 Richard Spencer in town for the largest white nationalist and Alt Right conference of the year in Washington, DC on November 18, 2016. (Linda Davidson/The Washington Post via Getty Images)
Advertisement

NEW YORK (JTA) — There is something curious about the media attention given to the recent leak of Richard Spencer’s post-Charlottesville rant, in which he decried “little f—ing kikes” and “little f—ing octoroons,” an anachronistic slur for someone who is one-eighth black, and added that he rules “the f—ing world.”

While it is actually impressive how Spencer manages to be so racist, anti-Semitic and egomaniacal in so few words, the public reaction to it is a reflection of the American view of white supremacists and neo-Nazis.

Spencer’s new recording is a big nothing-burger; his views have been clear since he started the Alternative Right blog in 2010. He’s a white supremacist. White supremacy, by its very nature, entails disparaging people of color, blaming Jews for how things are and laying plans for genocide. This was also the guy who ended a speech with “Heil Trump” and said “peaceful ethnic cleansing” was his plan for America’s future.  Which part of this did people miss?

Many Americans can’t grasp the fact that overt white supremacists are a longstanding part of the American political landscape. The Ku Klux Klan was founded in the 1860s. Nazis have been on our shores since the 1920s. Millions of Americans have joined these groups. And they have killed thousands of people—from lynching black folks and bombing synagogues to shooting up mosques. But to many Americans, white supremacists remain, as Fox News’ Tucker Carlson said in August, a “hoax” and a “conspiracy theory.” According to him, there’s no reason to pay attention to them.

The media savvy alt-right is well aware of this deep-seated desire to deny their existence. They know that journalists, trained to tell “both sides,” will run the most brazen denials—even when they’re delivered with the most ostentatious of smirks. White supremacists know that the country is filled with Tucker Carlsons, eager to grab the flimsiest pretext to pretend white supremacists are a hoax. What anti-Semite—after rehashing tired old stories about Jewish control of the banks, the media and the U.S. Congress—doesn’t inevitably proclaim, “And don’t you dare say I’m an anti-Semite!” Neo-Nazis deny the Holocaust almost reflexively, when you’d think they would brag about this kind of thing. Denial, it seems, runs deep.

I have seen, over and over again, how people will not accept that someone is a white supremacist—as long as they don’t say, “I am a Nazi.” In New York City in 2016, we saw this when a longstanding member of Holocaust denial and white supremacist publishing circles spoke at the Brooklyn Commons, a supposedly “progressive” venue. We see it today when the NYCFC soccer club tolerates fans who have neo-Nazi tattoos and were photographed at Charlottesville in 2017. And we saw it when CNN had Richard Spencer on in July, treating him as some kind of legitimate commentator.

For many Americans, no one is ever a Nazi — unless they have an affidavit, signed and notarized, stating that they are. The good news is that this new recording has hopefully opened people’s eyes.

Now, we just have to deal with the other tens, or hundreds, of thousands of white supremacists who are active in America today.