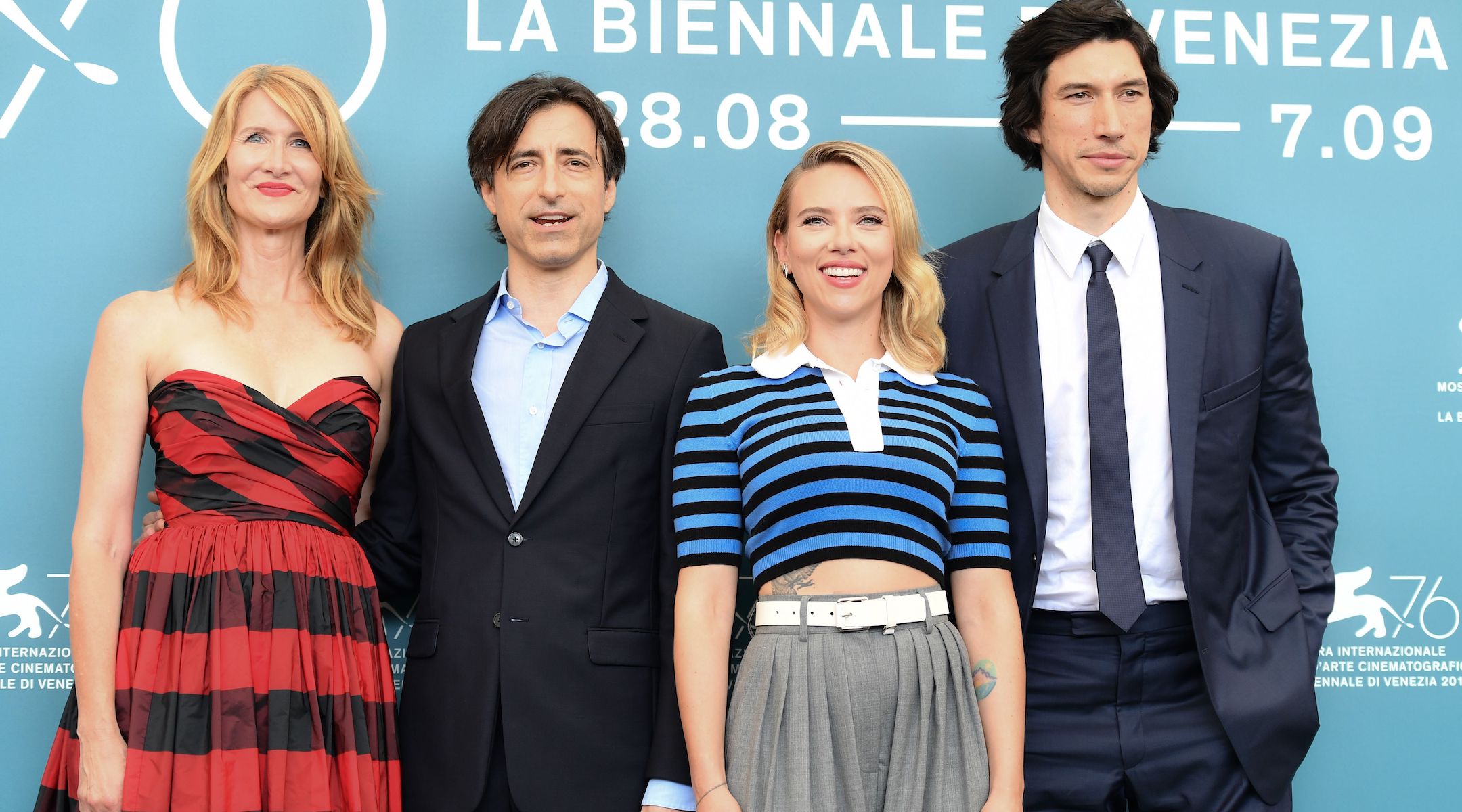 (JTA) — The 2019 Golden Globe nominees were announced Monday morning, and the film “Marriage Story,” written and directed by Noah Baumbach, leads the pack with several nominations. Here are the other Jews and Jewish productions that were nominated:

The movie is up for best drama film, and Baumbach also scored a nomination for best screenplay. Jewish co-star Scarlett Johansson is nominated for best actress in a drama (her co-star Adam Driver, who isn’t Jewish but often plays Jewish characters, is nominated as well, for actor in a drama).

The film draws on Baumbach’s own divorce from Jewish actress Jennifer Jason Leigh. He has called it a “love story about divorce.”

Randy Newman, the Academy Award- and Grammy-winning Jewish songwriter, is also nominated for his score.

Taika Waititi’s anti-hate satire about a German boy who wants to be a Nazi toward the end of World War II is up for best musical or comedy film. Waititi, who wrote and directed the film — and also co-starred as an imaginary version of Hitler dreamed up by the protagonist — is Jewish and a New Zealand Maori.

“I experienced a certain level of prejudice growing up as a Maori Jew,” he wrote in the film’s production notes. Making the film in 2019 “has been a reminder, especially now, that we need to educate our kids about tolerance and continue to remind ourselves that there’s no place in this world for hate.”

Jewish director Sam Mendes got a nod in his category for helming this World War I drama, which is also up for best film.

Everyone’s favorite show set in late 1950s Upper West Side New York is up for best TV comedy series. Lead Rachel Brosnahan (who is not Jewish, but plays the very Jewish Midge Maisel) is up for best actress in the TV comedy category.

The Jewish Telegraphic Agency spoke recently with one of the show’s stars, Tony Shalhoub, before the debut of season 3.

The Jewish actor, known for his comic roles, is nominated for best actor in a miniseries or TV movie for his dramatic turn in “The Spy,” a six-episode Netflix series on the Israeli spy Eli Cohen. Cohen — the real spy — embedded himself in the upper echelons of Syrian society in the 1960s to provide Israel with crucial intelligence before being discovered and killed.

The Jewish actress and sister of Jonah Hill is up for best actress in a comedy film for her scene-stealing performance in “Booksmart.”

The Jewish Broadway star, best known for his lead role in the musical “Dear Evan Hansen,” is up for best actor in a TV comedy for his performance in Netflix’s “The Politician.”

Paul Rudd is nominated in the same category for playing two versions of the same character in “Living With Yourself,” which was created by “Daily Show with Jon Stewart” alumnus Timothy Greenberg.

The Jewish pair earned nominations for their performances in “The Kominsky Method,” Douglas for lead actor in a TV comedy series and Arkin for supporting actor in “a series, limited series or motion picture made for television.” They play an aging Jewish acting coach and his aging Jewish agent, respectively.

Winkler, the winner of two Golden Globes for playing The Fonz on “Happy Days,” is nominated in the same category as Arkin for his role in the HBO series “Barry.”