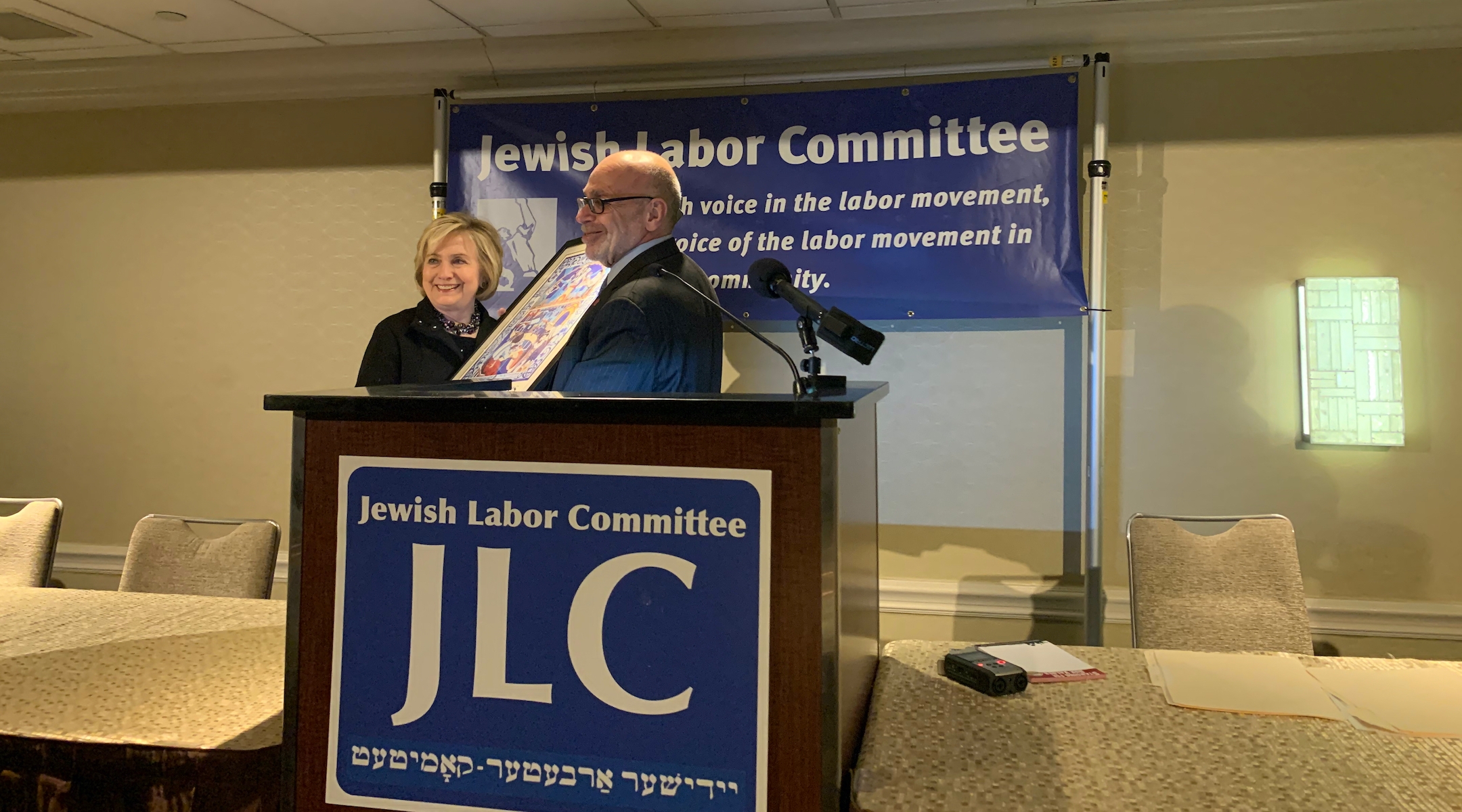 NEW YORK (JTA) — Hillary Clinton slammed the Trump administration and spoke of the Jewish concept of tikkun olam, repairing the world, at an event organized by the Jewish Labor Committee.

After being introduced by Jewish Labor Committee President Stuart Appelbaum, Clinton thanked the organization for its work before quickly pivoting to attack President Donald Trump and his administration.

“We’ve never seen such a cruelty and contempt for the values that we pledge allegiance to, that we see embodied in our constitution, that we have fought to make a more perfect union over all of these years together,” she said.

“And the current administration — I don’t need to tell you — has been conducting a concerted attack on the rule of law, on the importance of our government and the services that it provides for people. They’ve attacked journalists and the freedom of the press, and in fact, they’re waging a war on democracy.”

In her 12-minute address, which was met with laughs and applause, Clinton mentioned a number of Trump’s actions, from his family separation policy at the border to his repeated attacks on journalists and his efforts to end the Affordable Care Act, or Obamacare.

Founded in 1934, the Jewish Labor Committee promotes labor organizing in the Jewish community.

At the dinner, the organization gave out awards to the American Federation of Government Employees; to Demos Demopoulos, the secretary-treasurer of the Teamsters Joint Council 16; and to Abby Levine, the director of the Jewish Social Justice Roundtable.

In her speech, Clinton cautioned the crowd against becoming complacent.

“It would be easy to walk away and say ‘I can’t deal with this. I can’t tell fact from fiction. I don’t wanna live in an alternative reality. I’m checking out,'” she said. “Well that’s what the other side wants us to do, my friends. They want us to just throw our hands up in despair and say somebody is going to have to continue the fight, I can’t do it any longer.”

Ahead of the 2020 election, she urged people to organize.

“It’s gonna be a tough election and you need to bring your organizing skills, your shared sense of values, your feeling of empathy and compassion and caring, your deep conviction about justice, because we’re gonna need every single person in this fight,” she said.

Clinton also spoke about the history of Jewish labor organizing, including the participation of the Jewish Labor Committee in the 1963 March on Washington, in which protesters demanded civil and economic rights for African-Americans.

“At the heart of it all is the concept of tikkun olam, which says that repairing the world is the responsibility of each and every one of us,” she said of the group’s participation in the event, “or as I learned growing up in the Methodist church, ‘Do all the good you can, for all the people you can, in all the ways you can, as long as ever you can.'”