Where does Cory Booker stand on anti-Semitism, Israel and other issues that matter to Jewish voters in 2020? 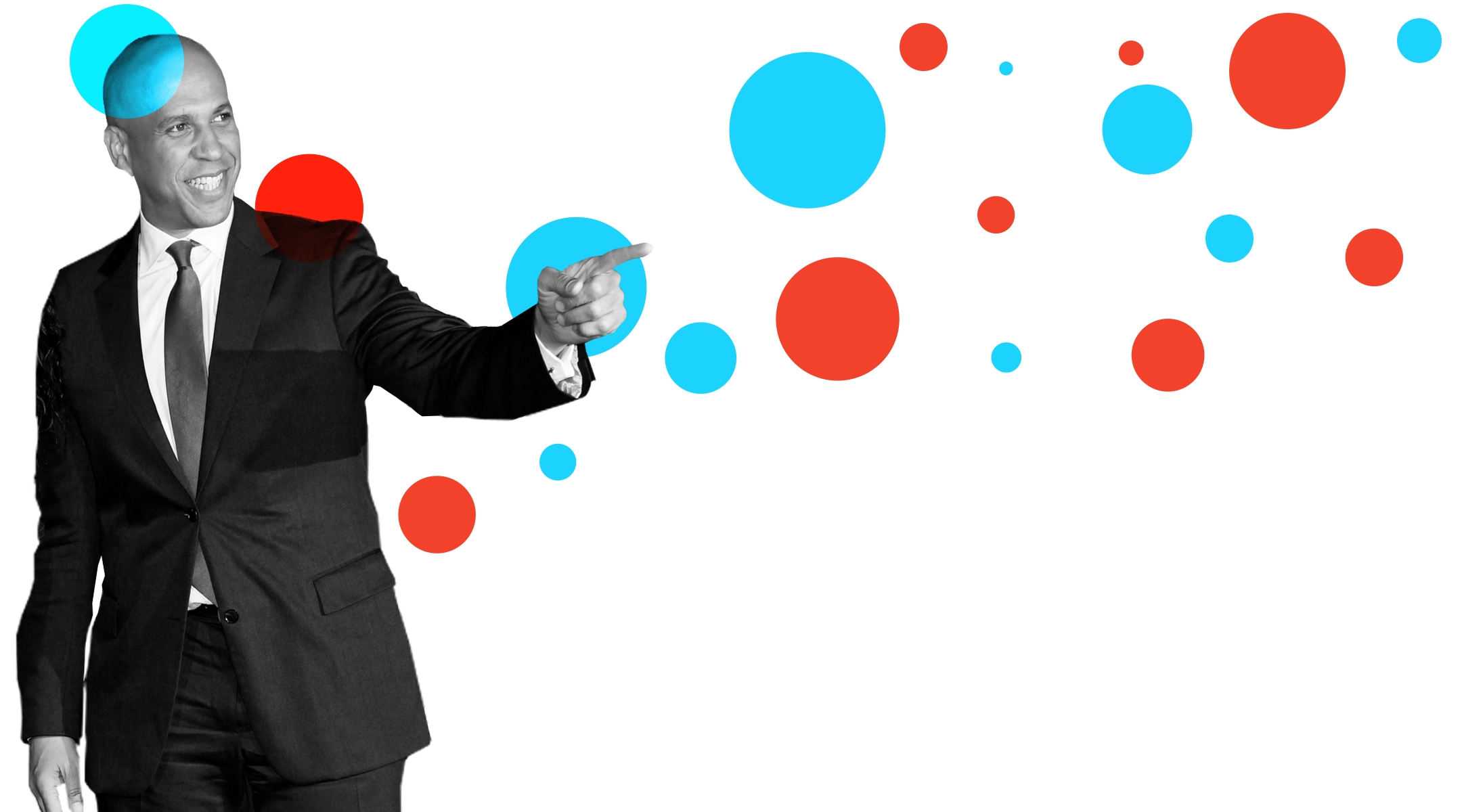 (JTA) — Cory Booker, the junior senator from New Jersey, has been called “the Senate’s most Jewish non-Jew.”

He can speak some Hebrew, knows his Torah, has a long and complicated history with the prominent Rabbi Shmuley Boteach, whom he became friends with while at Oxford. Booker became president of Oxford University’s Jewish student group, The L’Chaim Society, and cofounded a Jewish group at Yale Law School.

Hebrew soundbytes aside, here’s where he stands on Jewish issues.

What has Cory Booker said and done on anti-Semitism?

“Let me be clear,” Booker said in March. “Anti-Semitism is un-American. It is anti-American. It violates, most deeply, our commonly held values, and we must take steps on the global stage against vicious acts that target hatred.”

In February, Booker talked about the rise in hate crimes across the country, including anti-Semitism.

“We have seen painful realities surge in our country, a rise in anti-Semitism, anti-Islamic attacks. We’re seeing just a vicious, horrific, cruel violence that’s motivated by bias and hate. We need to do more to protect all Americans and make sure all neighborhoods and communities are safe.”

After the Pittsburgh synagogue attack in October 2018, his senator account tweeted, “My heart breaks for the victims and their families affected by this senseless tragedy and horrific act of anti-semitic violence in #Pittsburgh. We must unite against this hatred, and take action to prevent future gun violence — we are not powerless to stop this.”

Booker on multiple occasions has condemned Trump for endangering Omar with his attacks on her. One of the condemnations came at an event where he was specifically asked about Omar’s own controversial comments; he did not address the question.

Booker was criticized as well for having met in the past with Louis Farrakhan, the anti-Semitic head of the Nation of Islam. In July, the senator said he would no longer meet with Farrakhan anymore, saying he rejects “anybody who preaches that kind of bigotry and hate towards other Americans.”

What has Cory Booker said about the movement to boycott, divest from and sanction Israel — commonly referred to as BDS?

At a New Hampshire campaign stop in 2019, Booker said, “I am against BDS, but I am for your rights to protest, your free speech rights.”

He explained why: “I am against BDS because I am deeply concerned that we have roots in the BDS movement that do not have any sense for proportionality about other countries. Where is the Chinese BDS movement because of what they’re doing to the Uighurs and to other folks? But you do not hear that. Israel is a country that has a right to exist. And a right to defend itself.”

He voted “no” on a 2018 anti-BDS bill, however, saying that the legislation raised “First Amendment concerns” for him.

Booker is a regular at the American Israel Public Affairs Committee conference. In leaked audio from a private meeting at AIPAC 2019, Booker said he and AIPAC president Mort Fridman “text message back and forth like teenagers.”

In that same meeting, Booker said, “Israel is not political to me. I was a supporter of Israel well before I was in the United States Senate. I was coming to AIPAC’s conferences well before I knew that one day I would be (a senator). ‘If I forget thee, O Israel, may I cut off my right hand.'” (Booker was referencing Psalm 137 there, about Jewish exile from the Holy Land.)

His history with AIPAC does truly run deep: even as mayor of Newark, Booker spoke at the AIPAC National Summit in 2008, with his pal who’s no longer his pal, Rabbi Shmuley Boteach.

There were rumors of candidates “boycotting” AIPAC in 2019 — which were refuted by AIPAC — but Fridman made a point to say when he reached out to Booker’s team, “They said obviously Cory is going to be there [because Cory] stands with the state of Israel. The moment this thing came out, Cory immediately told us he would be here. As always. He’s always been here for us. He will always be here.” 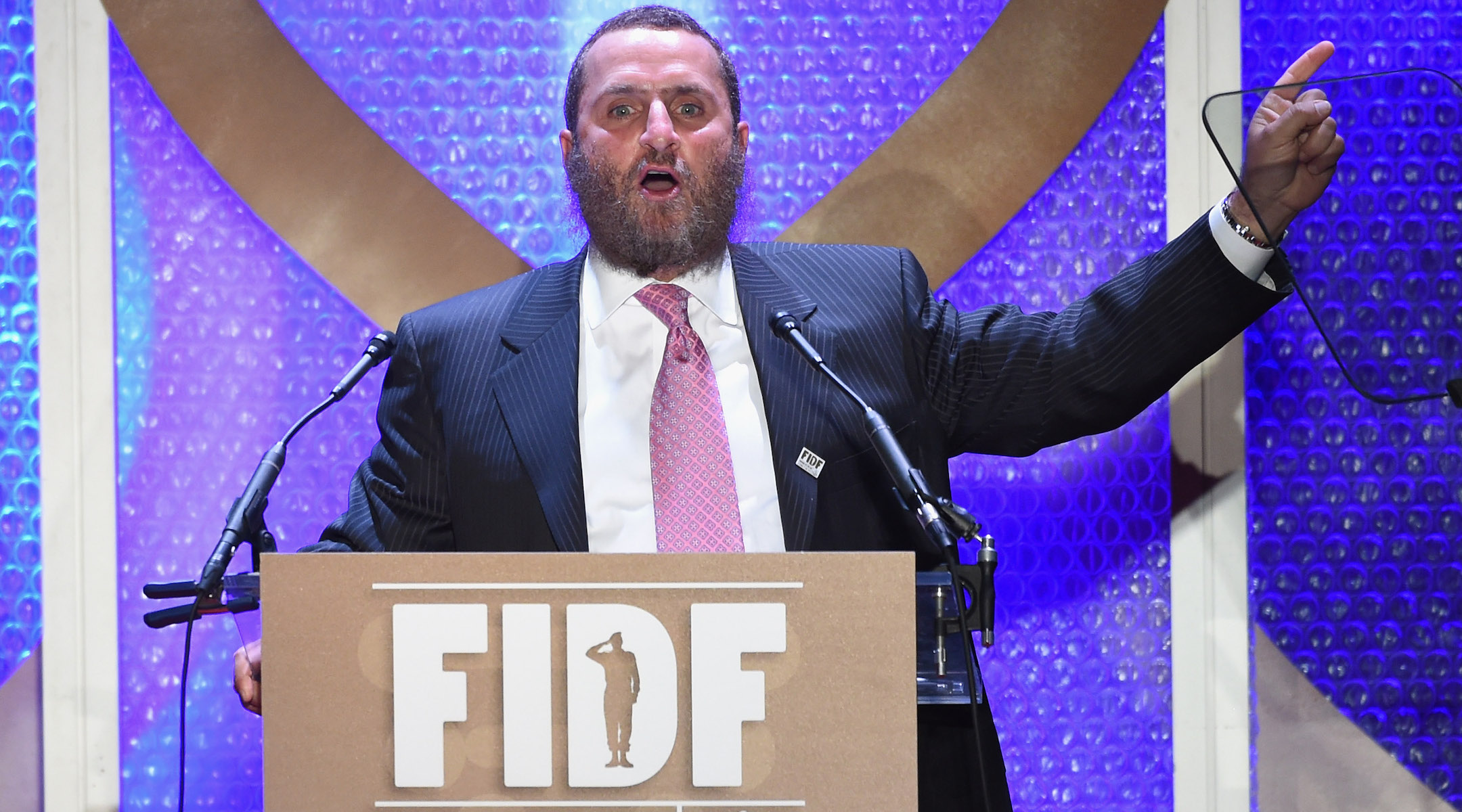 Rabbi Shmuley Boteach at a Friends of the IDF gala in New York City, March 15, 2016. Booker and Boteach clashed over differing opinions on the Iran nuclear deal. (Shahar Azran/Getty Images)

AIPAC is not the only pro-Israel group that Booker works with. NORPAC, a non-partisan Political Action Committee that works to promote U.S.-Israel relations, is consistently one of his biggest donors. According to NJ.com, NORPAC is Booker’s “second-biggest lifetime source of campaign contributions.”

So, let’s turn to more specific thoughts on Israel.

“I have the blessing of discovering Israel before I was a politician,” Booker told David Axelrod on his podcast. “My first trip to Israel was when I was 24 years old. I had been studying Torah for two years and discovering Israel for me, and the people of Israel and the authenticity and the grit… the wonderful thing about Israel is its democracy and you have fearsome debates, the same way we have in our country. And I often laugh at people and say, ‘I don’t want anybody to judge my nation on Donald Trump and [in] the same way I’m not going to judge Israel by Netanyahu.’”

Where does he stand on solving the Israel-Palestinian conflict?

“We need to find a pathway forward to a two-state solution [where] the human dignity of both folks are elevated,” Booker said in February 2019.

In October, he told the Council on Foreign Relations, “I support a two-state solution because I believe in justice and self-determination for both Israelis and Palestinians.”

What about using aid to Israel as leverage for policy change?

While some other candidates, such as Elizabeth Warren and Pete Buttigieg, have floated the idea, it’s not something Booker has discussed publicly thus far one way or the other.

What has he said on settlements or annexation of the West Bank?

When IfNotNow activists asked him about the West Bank, Booker deflected, telling them, “If that’s your issue, I would understand if you want to support somebody else, but know I am just as committed to that as you are — committed to human rights.”

Booker’s career is full of Jewish fun facts: He spoke Hebrew on CNN. He founded a Jewish student group at Oxford. He keeps a Hebrew bible on his desk. He often opens speeches with Torah analysis. The list goes on.