In Latvia, luxury synagogue opens in a beach resort for oligarchs 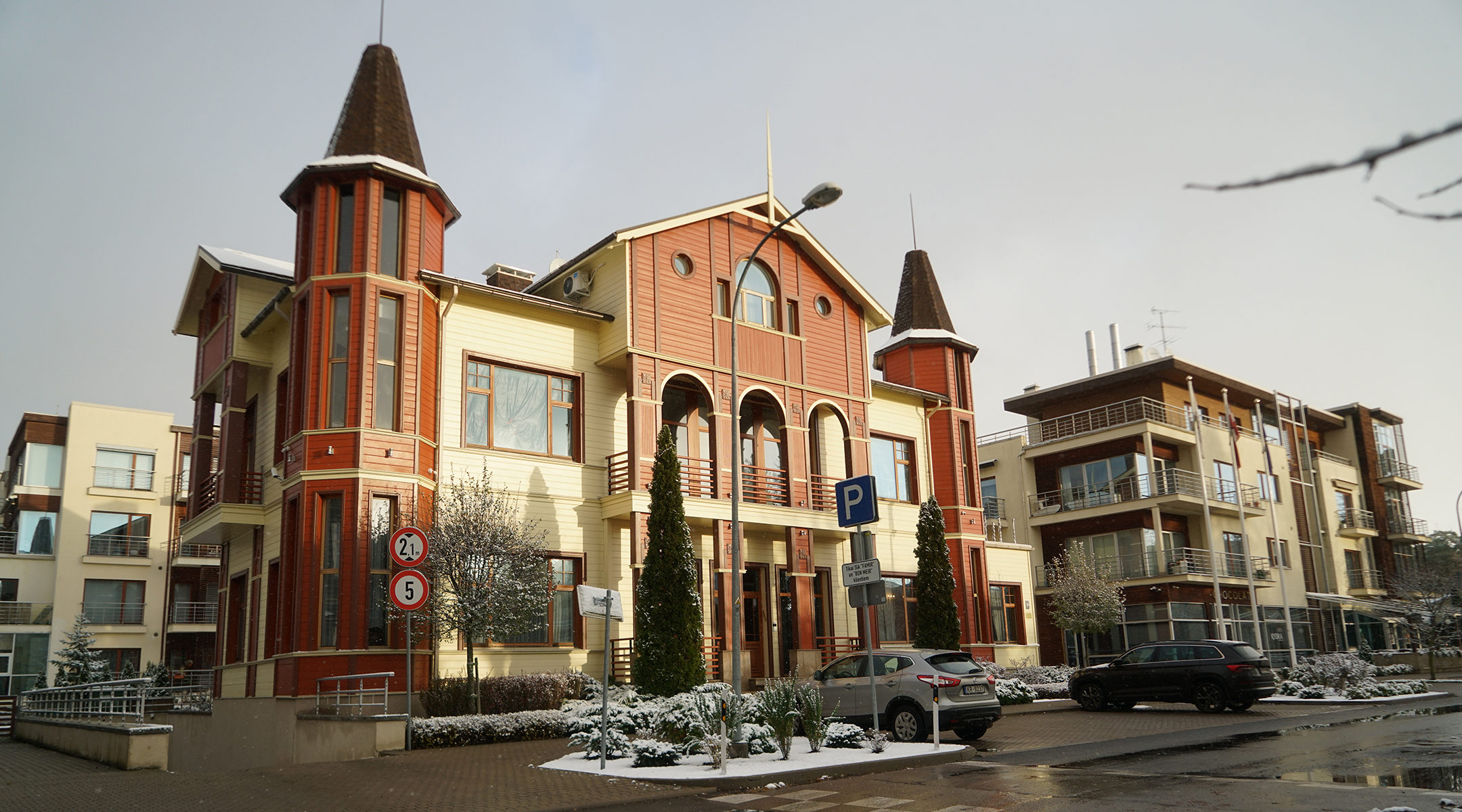 JURMALA, Latvia (JTA) — During the summer, the beaches of this Baltic resort city fill up with sunbathers in designer swimwear who stay long after sunset to dance and drink at dozens of seaside DJ stages.

Sometimes referred to as the Cote d’Azure of the former Soviet Union, Jurmala has some of the region’s priciest real estate, and its abundance of luxury car dealerships indicate its longstanding appeal to oligarchs and high-income travelers. 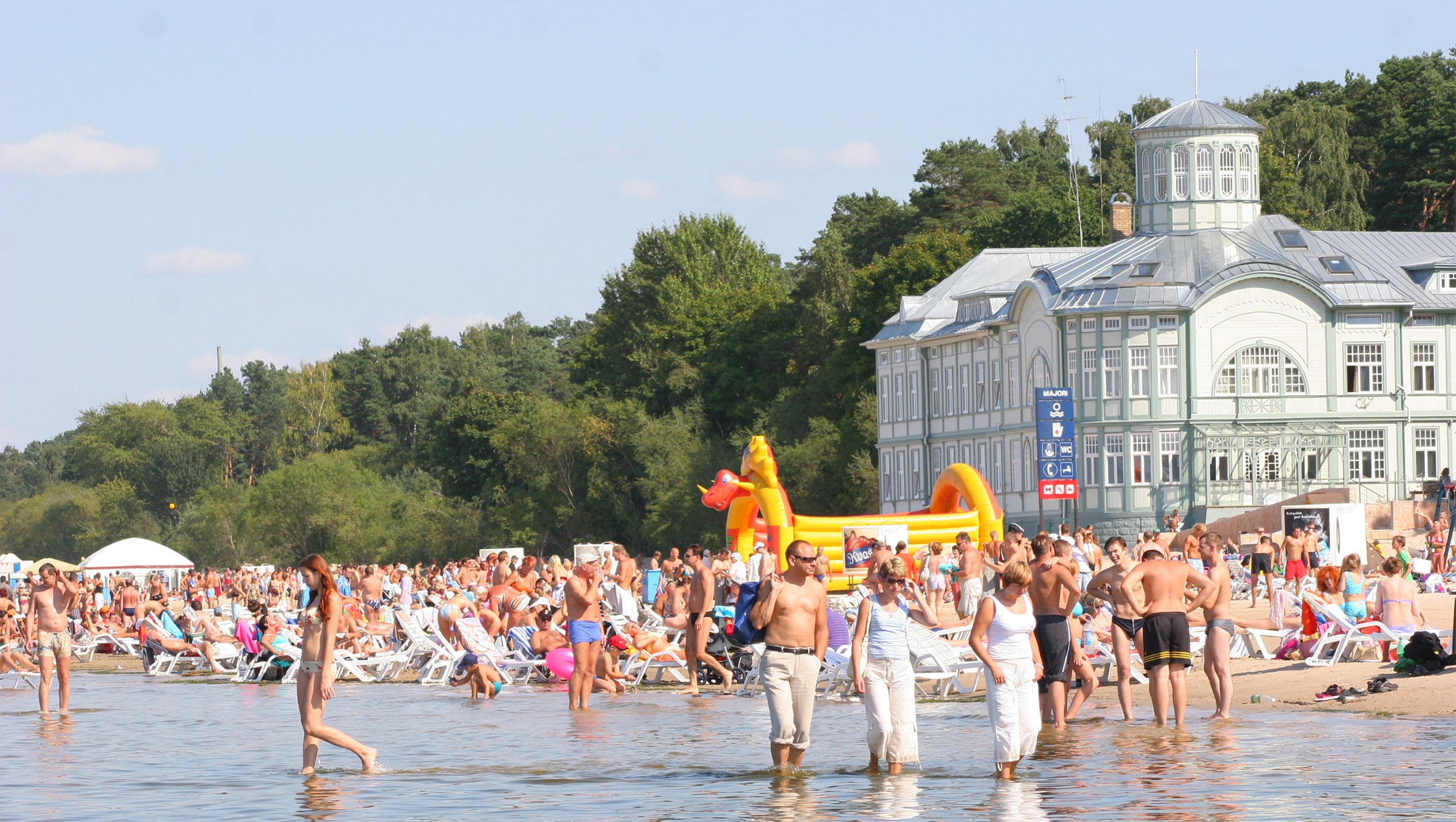 One of the beaches in Jurmala, June 8, 2005. (Jurmalastic/Wikimedia Commons)

But in winter, the city’s summer revelers join an annual exodus of 100,000, leaving Jurmala feeling deserted. Some 50,000 permanent residents live in the city year-round, spread across 40 square miles of coastal woods.

It’s not an obvious place to start a new synagogue. Yet that’s exactly what happened last year when a rabbi opened what he says is the first new synagogue established since the Holocaust and only the third in all of Latvia.

A luxury building that caters to some of the richest Jews in the Russian-speaking world, the Beit Israel synagogue opened with fanfare last year in a beachfront building whose architecture echoes Latvia’s iconic lost wooden synagogues. With its redwood furniture, backlit panels, velvet upholstery and Persian carpets, the shul has the feel of a luxury hotel.

In summer, there are enough luxury cars in the parking lot “to make you think this is Monaco,” said Mark Wolffson, a 42-year-old regular at Beit Israel.

The new synagogue is a milestone for the 10,000 Jews of Latvia, a small nation sandwiched between Lithuania and Estonia where only 200 Jews survived the Holocaust out of a prewar Jewish population of 90,000. It’s also testament to how Russian-speaking Jews with little knowledge of their faith are reconnecting with their traditions once they achieve professional success.

“For us, it’s a big development,” said Dmitry Krupnikov, a former leader of Latvia’s Jewish community.

Among the synagogue’s wealthiest members is its founder, the Moldova-born real estate and software entrepreneur Emmanuil Grinshpun. He began visiting Jurmala when it was home to the popular New Wave song competition, which the Russian-Jewish musician Igor Krutoy started in 2002. The competition drew lots of Jews, but no organized Jewish community ever took root here.

“They would never come together as a community without a synagogue,” said Grinshpun, who lives with his family in Miami. “So I built one.”

Grinshpun also hired a full-time Orthodox rabbi, Shimon Kutnovsky-Liak, who moved here from Israel with his family. Kutnovsky-Liak’s family is from Latvia and struggled to escape the country in the 1970s when it was still part of the Soviet Union. His first year here, Kutnovsky-Liak said, was a mixed experience. 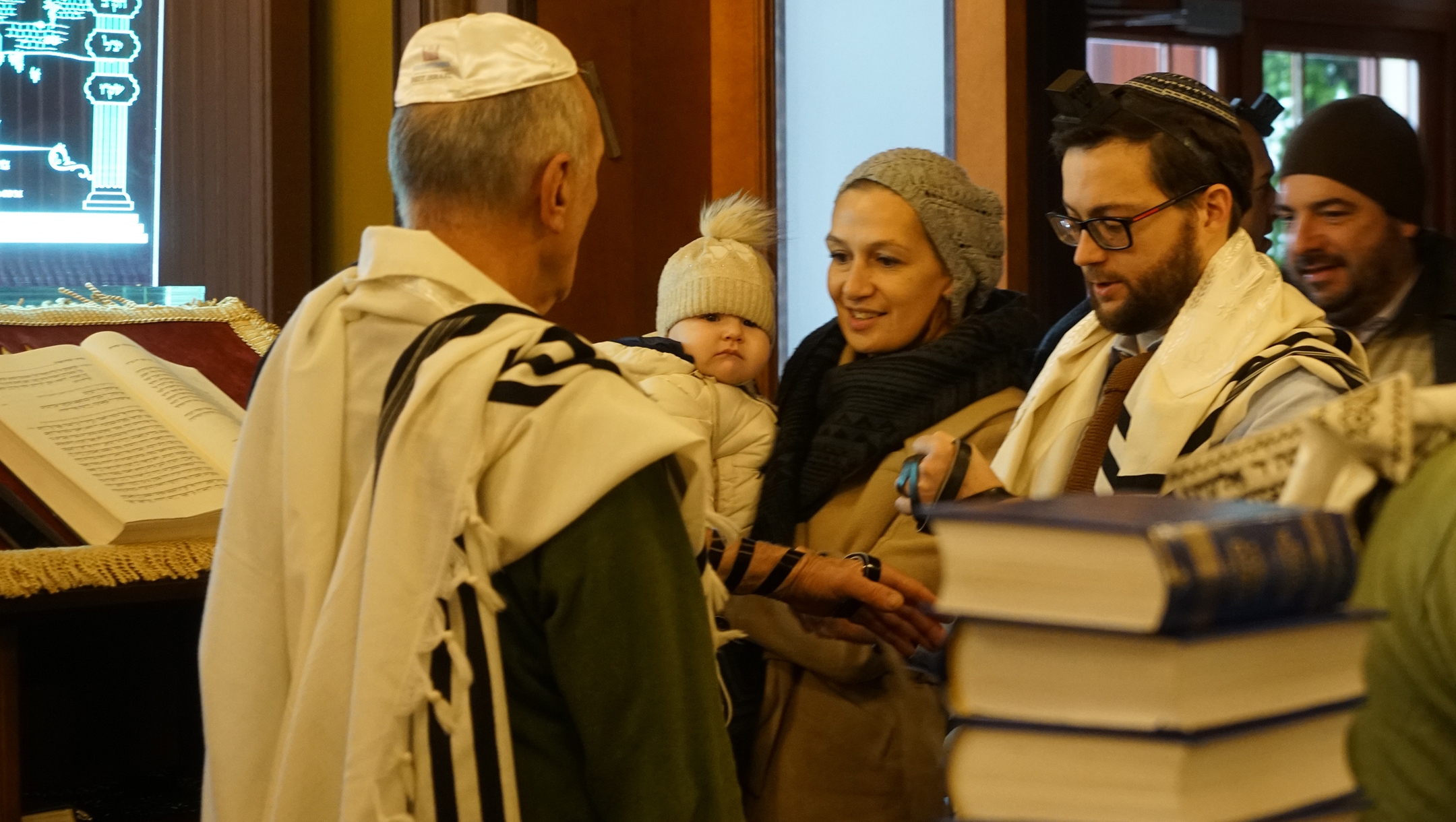 “In summer, there are euphoric days when the synagogue is full and there’s a feeling of rebuilding something magnificent,” he said. “Then autumn came, and for the first time in my life I found myself all alone in an empty synagogue on Shemini Atzeret.”

Beit Israel is the first pulpit for Kutnovsky-Liak, a veteran of an elite Israeli Air Force unit and a father of one. The rabbi found the quiet of the offseason depressing and it caused him to doubt himself.

During the winter, the 3,000-square-foot synagogue often cannot draw a minyan, the prayer quorum of 10 Jewish men required to recite certain prayers in Orthodox congregations. The handful of worshippers who do show up, most of them men, pray what they can as their cooling cups of tea and coffee add aroma to the cozy atmosphere.

“It’s a sign from the Almighty to keep going, stay on the path,” said Yevgeniy Kouspin,  a 68-year-old businessman who moved here from the capital city, Riga, in 2016.

Kouspin grew up in a secular family and was ritually circumcised only at the age of 55. A gravel-voiced joker with a proclivity for limericks, his behavior changes abruptly when morning services begin. He rocks back and forth with his eyes closed, occasionally yelping words from prayers he already knows by heart.

Earlier this year, Kouspin had a son with his wife, Anzhelika, who is not Jewish but regularly accompanies him to synagogue.

“It’s important to keep in touch with one’s roots and traditions,” said Anzhelika, whose family is Muslim and comes from Azerbaijan.

Kouspin could go to Riga’s Peitav Synagogue, which is only about a half-hour’s drive away. But Peitav is a “closed community,” he said, where non-Jewish spouses are not made to feel very welcome.

For Kouspin, the existence of an accommodating synagogue near his home is more than a convenient amenity; it’s a vehicle for continuity. His son, Benjamin, is not Jewish according to traditional Jewish law because his mother is not Jewish, but Kouspin hopes he will grow up to marry a Jewish woman. 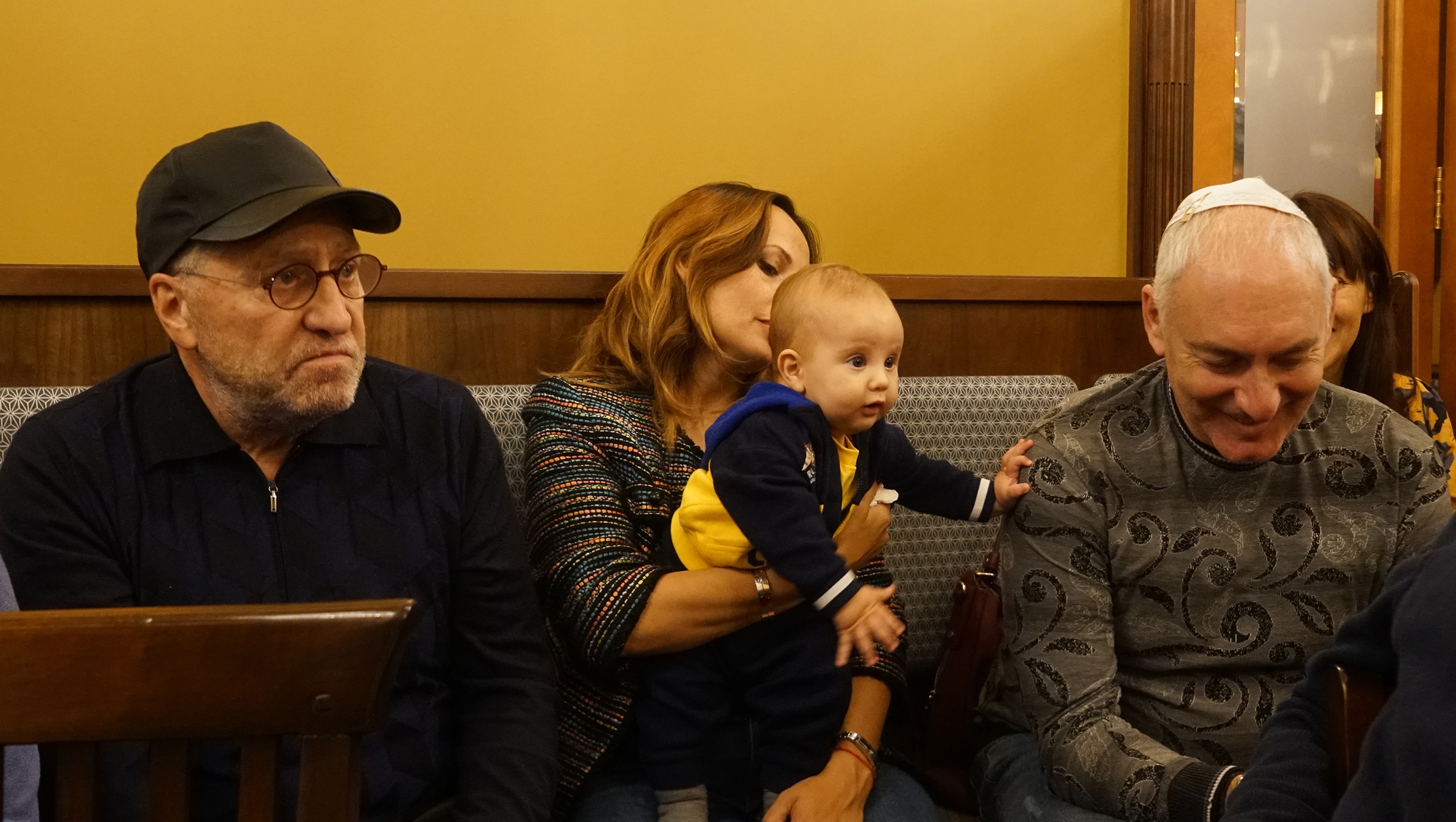 Yevgeniy Kouspin, his son Benjamin and wife Anzhelika at the synagogue of Jurmala, Oct. 29, 2019. (Cnaan Liphshiz)

Alexander Vetshteyn, 36, moved to be nearer to the synagogue, where his wife is studying in preparation for her conversion in Israel.

“For all my life I grew up without a synagogue or any other connection to Judaism,” said Vetshteyn, a logistics manager in Riga who hails from Yekaterinburg, Russia. “So when a synagogue opened here, we moved to be within walking distance so it can be part of lives, part of Shabbat.” 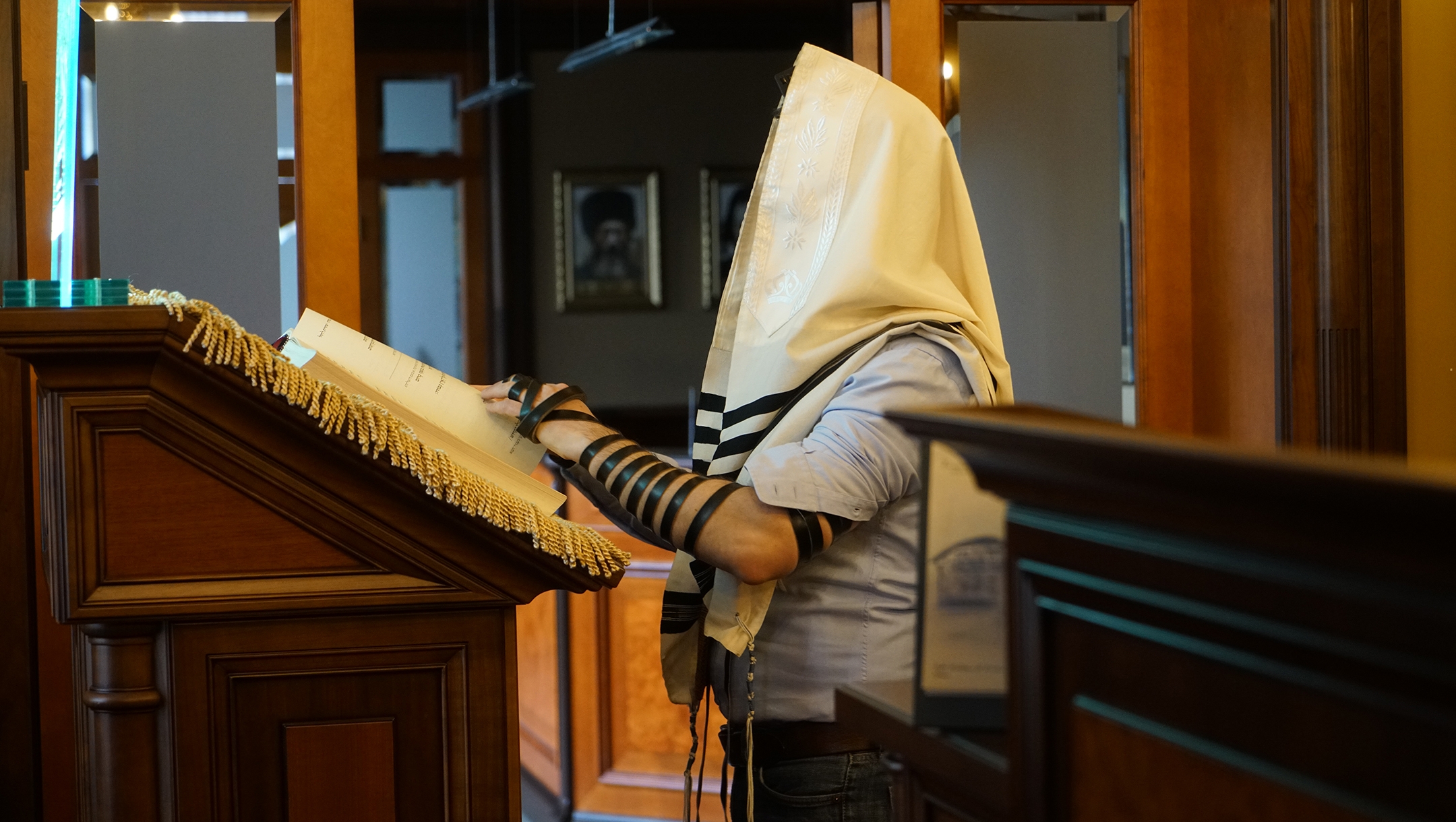 Before the Holocaust, Jurmala had small Jewish community of a few hundred people and three synagogues. The city is sprawled across 15 miles of beachfront, so the synagogues were necessary to enable the Jews of Jurmala to live within walking distance.

One of them is among the hundreds of rotting wooden synagogues that now dot Latvia. It was returned in 2010 to the Jewish community, which currently lacks the funds to renovate it. Renovating the nationally registered monument building is likely to cost millions of euros. 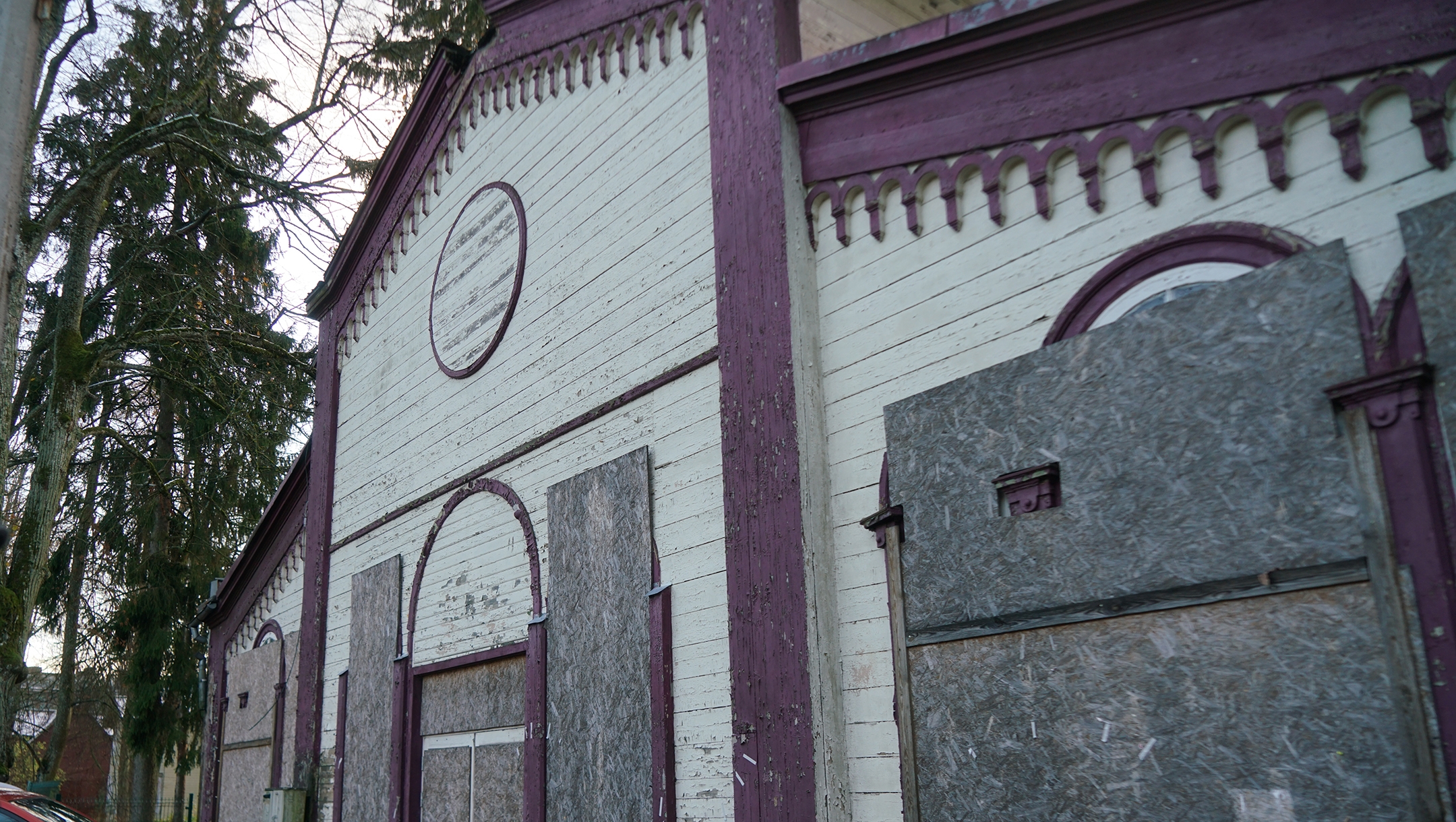 One of the three abandoned synagogues of Jurmala, Oct. 29, 2019. (Cnaan Liphshiz)

“Just as filling the synagogue in winter is a struggle, so is finding space in the busy months in summer,” said Kutnovsky-Liak, who is working on funding and permits to transform that building into a Jewish community center with a mikvah, or ritual bath.

Another synagogue regular is Lev Ostrovsky, an 83-year-old Holocaust survivor who is a celebrity in Latvia because of his career as a top soccer player, swimmer and co-founder of the New Wave song competition. 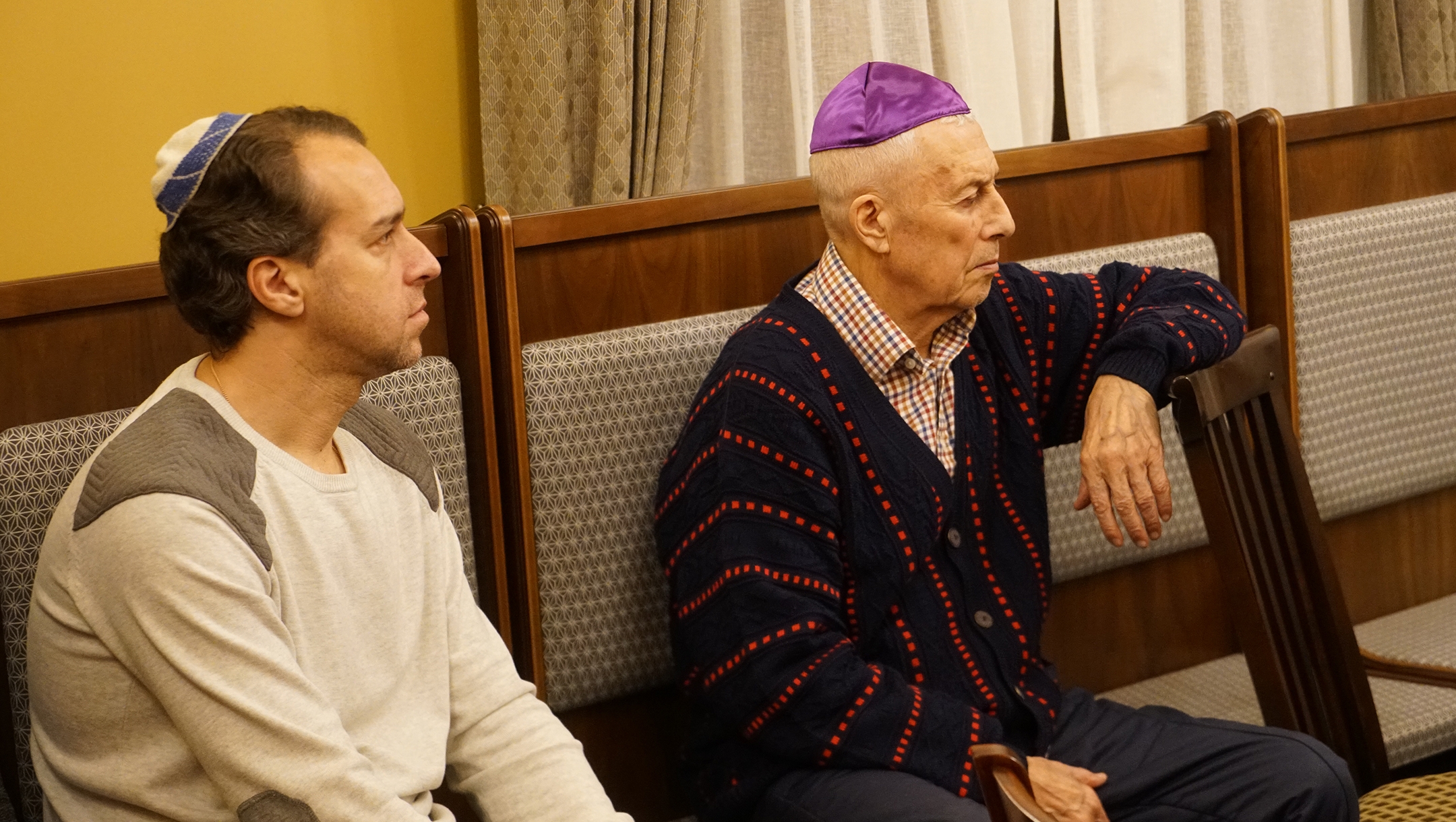 “This is a luxury synagogue,” Ostrovsky said, noting its location on the boardwalk and high-end furnishings. “But the truth is, it really doesn’t matter what kind of synagogue you put here. The mere fact it exists is what matters after what the Jewish people suffered here.”