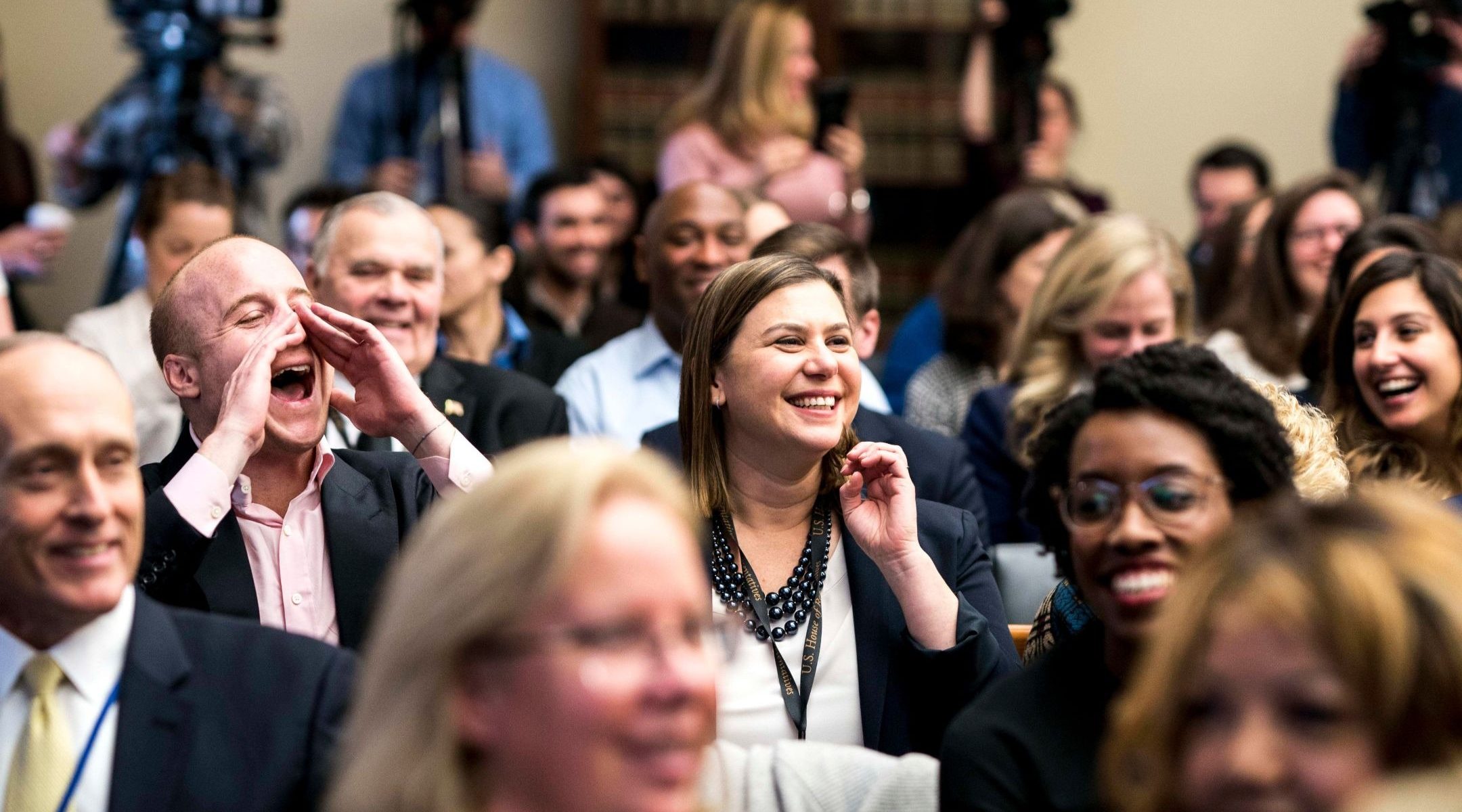 WASHINGTON (JTA) — Max Rose, Elissa Slotkin and Elaine Luria are the Jewish third of the “Gang of Nine,” moderate Democrats in the House with national security backgrounds from swing districts.

It’s a tight group, as described by Politico last year: The nine Democrats sought offices close to one another, exchange frequent texts and hang out over Chinese food.

In September, after changing their minds about supporting impeachment, giving Speaker Nancy Pelosi the votes she needed to push ahead with the inquiry, the five women in the gang adopted another sobriquet: the “badass caucus.”

All nine members were eventually on board with impeachment, despite threats by Trump and other Republicans to use their votes to target them next year in districts that were Trump-friendly in 2016.

But now there’s a sign of division among the Jewish members of the gang over a big national security issue: Iran.

Slotkin, a Navy veteran from Michigan, led the charge this week on pushing a resolution that would limit Trump’s power to wage war with Iran. Luria and Rose were among just eight Democrats who voted against the measure, which passed 224-194, mostly along party lines. (Along with the eight dissenters on the Democratic side, three Republicans voted for Slotkin’s bill.)

The bill, backed by Pelosi, was triggered by what Democrats and a few Republicans have said was Trump’s failure to adequately notify Congress of the assassination last week of a top Iranian general, Qassem Soleimani, or to explain the action afterward. Iran hit at two U.S. bases in Iraq in the aftermath, and while tensions seem to be dying down now, they could flare again.

A companion bill is under consideration in the Senate.

A third Jewish Democrat among the eight dissenters is Josh Gottheimer of New Jersey, who co-chairs the Problem Solver’s Caucus, a grouping of 45 or so Democrats and Republicans who seek bipartisan solutions. Luria, Slotkin and Rose are also members of the caucus. Gottheimer, elected in 2016, does not have a national security background, but he is similarly moderate.

All four face similar pressures: They are in districts that Trump won in 2016. In the cases of Rose, Slotkin and Luria, their districts are heavy with veterans who might look closely at anything that seems like criticism of a military action.

Rose and Slotkin each cited their national security background in explaining their opposing votes; Luria did not.

“As a former Shia militia CIA analyst who has served multiple times in Iraq, I have lived Iran’s destabilizing activity in Iraq up close and personal,” Slotkin said. “But [Soleimani’s] behavior does not mean that the administration can disregard the Constitution by engaging in a wider war, without consulting first with Congress.”

“I know all too well the real costs of war and sending troops into harm’s way is the most consequential decision I could make,” Rose said.

Rose, Gottheimer and Luria all argued that Slotkin’s resolution was inadequate and preferred to revisit the 2001 Authorization of Use of Military Force, which was originally meant to allow then-President George W. Bush to wage war in Afghanistan against Al Qaeda, the group that carried out the terrorist attacks on Sept. 11 of that year.

Bush, Obama and now Trump have used the AUMF to wage war in the region, and lawmakers from both parties have said the presidents have been promiscuous in how they used it, arguing that it should be revised or replaced.

Each of the dissenters addressed Slotkin’s resolution differently. Luria was the most circumspect, simply saying that she preferred revisiting the AUMF. Gottheimer offered a trenchant critique of the resolution itself, arguing that it mirrors existing law (which in itself is hardly unusual in Congress) and that it sends a mixed signal to Iran.

Rose’s statement made the same arguments, but he got somewhat personal, saying he refused to “play politics with questions of war and peace.” He also praised Trump.

Maybe Slotkin and Rose can work this through over dim sum.