The Tell: The Iran flare-up, winners and losers edition 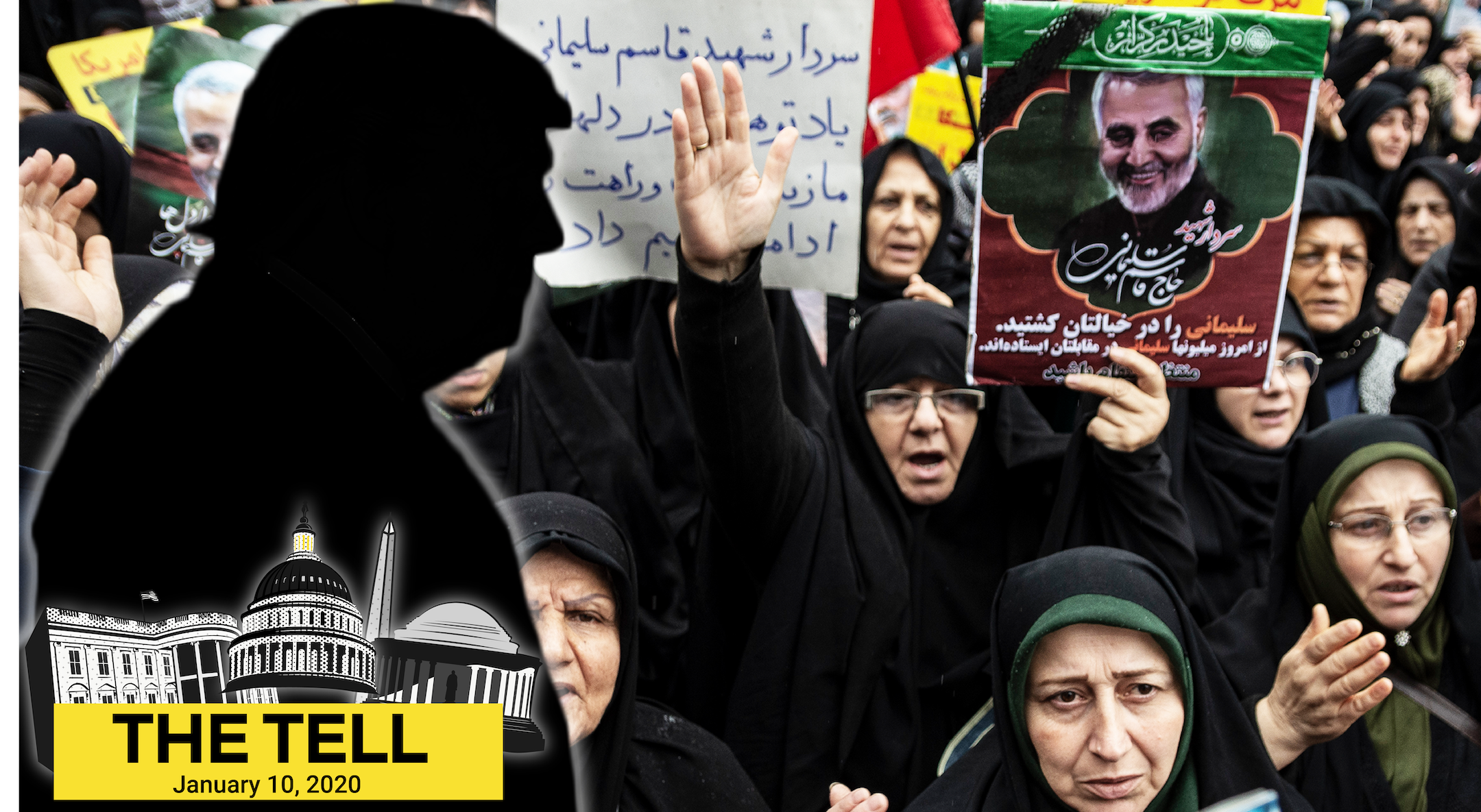 WASHINGTON (JTA) —Welcome 2020. Is it December yet? Can you set my alarm for December?

No? Then how about a dive into how Iran tensions are playing out in D.C. and in the Jewish community.

Badass on the frontline

Democrats are seeking to limit President Donald Trump’s ability to engage Iran in a war in a bill coming to the floor on Thursday (as this is written).

Nancy Pelosi tapped Elissa Slotkin, the moderate Democrat from Michigan, to introduce the war powers resolution. Slotkin is one of the five self-described “badass” freshmen congresswomen who were critical in advancing impeachment.

All five women have national security backgrounds and all five won districts in 2018 that Trump won in 2016. Pelosi tapping Slotkin at two critical moments — in September, announcing that she had changed her mind and supported an impeachment inquiry, and now, taking the lead in limiting Trump’s war powers — suggests the degree to which Pelosi is relying on the party’s center, and not its margins, to keep the House next year.

Slotkin, in announcing the resolution on Wednesday, did not hesitate to use her national security experience to make her case — a preemptive defense against the likes of Rep. Doug Collins, the high-profile Georgia representative who is accusing Democrats of betraying U.S. interests.

“As a former Shia militia CIA analyst who has served multiple times in Iraq, I have lived Iran’s destabilizing activity in Iraq up close and personal,” she said. “I have watched friends and colleagues get hurt or killed by Iranian rockets, mortars and explosive devices. And Qassem Soleimani was the architect of some of the worst destabilizing activities in the Middle East. But his behavior does not mean that the Administration can disregard the Constitution by engaging in a wider war, without consulting first with Congress.”

The precipitate for Slotkin’s action is the assassination of top Iranian general Qassem Soleimani last week. Trump’s argument is that taking out the leader of the Quds Force, the wing of the Islamic Revolutionary Guard Corps that carries out Iranian adventurism beyond its borders, is the best means of preventing war.

As of Thursday, Trump might have been winning the argument. Iran has indicated that if there were no retaliation for the missile strikes, there would be no further escalation, but it also was not quite ready to let the matter rest. Trump in a speech Wednesday appeared ready to de-escalate, promising unspecified new sanctions but no further military action in the wake of an Iranian strikes on U.S. bases.

“Iran appears to be standing down which is a good thing for all parties concerned,” Trump said.

Is all of this good or bad for Israel?

Iran threatened after its latest missile strike that further escalation would bring the conflict to U.S. allies in the region, including Israel.

That’s not an engagement Israeli Prime Minister Benjamin Netanyahu wants. In the on-the-record portion of his Cabinet meeting on Sunday, Netanyahu — almost alone among world leaders — praised the Soleimani killing. Off the record — but leaked later on — he told his ministers that “the killing of Soleimani is a U.S. event, not an Israeli event, and we should stay out of it.”

That’s not the kind of attitude that Trump would expect from a close ally whom he believes he has defended better than any of his predecessors. Which may explain why on Tuesday — a day after he met with Avi Berkowitz, Trump’s top Middle East counselor — Netanyahu was once again, and more expansively, extolling the Soleimani hit, this time in a televised address.

“It is very important to say that Israel stands completely beside the United States,” Netanyahu said, in case anyone missed the point.

Is it good for the Democratic presidential candidates?

Democratic candidates have hewed to the Pelosi and Slotkin template, decrying Soleimani as a terrorist but questioning whether the action was necessary or counterproductive. “Without more information, we can only hope that the president has carefully thought through the national security implications of this attack for our country and the grave risks involved,” former New York Mayor Mike Bloomberg said. “But given his track record and his history of making reckless and impulsive decisions that undermine U.S. strategic objectives and weaken our allies — most recently in Syria — there is every reason to be deeply concerned.”

Bernie Sanders and Elizabeth Warren have come under fire for calling Soleimani’s killing an “assassination.” Bloomberg took a shot at Sanders for using the term, Fox News reported. “This is a guy who had an awful amount of American blood on his hands,” Bloomberg said. “I think that’s an outrageous thing to say.”

(I’ve never understood how the word “assassination,” which is in modern usage a neutral term to describe the killing of someone of prominence, became politically loaded. Historians who routinely call Operation Valkyrie an assassination plot do not convey the notion that killing Hitler would have been a bad idea.)

The development has allowed Bloomberg, whose critics worry about his appeal outside of New York, to publicly flex his foreign policy muscles a bit.

Is it good for Trump?

The president, backed by enforcers like Collins, has so far whipped Republicans into unanimity against impeachment. He’s not having the same success with Iran. Democrats say that the White House briefing for lawmakers, post facto, on the Soleimani assassination, was arrogant and presumptuous. Agreeing were at least two Republicans, Sens. Rand Paul of Kentucky and Mike Lee of Utah, who are otherwise outspoken Trump boosters. They said after the briefing Wednesday that they were ready to support the version of Slotkin’s bill in the Senate, where it is sponsored by Sen. Tim Kaine, D-Va.

“They were in the process of telling us that we need to be good little boys and girls and not debate this in public,” Lee said. “I find that absolutely insane. It’s un-American, it’s unconstitutional and it’s wrong.”

If there are no Democratic defections, Lee and Paul bring backers of limiting Trump’s Iran war powers to 49. Two more Republicans and Trump could go into his impeachment trial wounded by a failure to keep Congress from encroaching on his most critical power, waging war.

Show me the Jews

Trump expects returns for his Middle East actions from the Jewish community. That came through in a New York Times report of a call Trump had with World Jewish Congress President Ronald Lauder just hours after an assailant armed with a machete wounded five Jews celebrating Hanukkah in a rabbi’s home in Monsey, New York.

Trump’s call wasn’t exactly about conveying sympathies, Maggie Haberman reported. Instead, he yelled “that Mr. Lauder should be doing more to ‘support’ him,” she said, citing three sources. “Mr. Trump ticked off a litany of administration actions. Mr. Trump said that he had done more for Jews than any other president and that he could still lose the Jewish vote.”

Send in the clowns

A pro-Israel political action committee, the American Pro-Israel PAC, was founded in 2018 by Jason Sullivan, an associate of Roger Stone, a longtime adviser to Trump and now a felon convicted of obstructing investigations into the Trump campaign.

Sullivan’s APIP has its own share of woes. Despite three fund-raisers, including one at Trump’s Mar-A-Lago resort that featured a presidential appearance, it has had difficulties paying its contractors and reporting its income to federal authorities, the Palm Beach Post reported in September.

That didn’t stop the group from promising a pro-Israel bash, first scheduled for Nov. 11 and then for Dec. 11. The video touting the “celebration of love and unity” in New York featured acrobats, scantily clad violinists, a juggler wearing Loki’s headdress, and women swinging from a chandelier … but no Israel content, except in the PAC’s seal.

Lachlan Markey, who writes The Daily Beast’s PayDirt newsletter, can uncover no evidence that this interesting gala ever occurred. Tickets ranged from $99 (an early bird special for young leadership) to $75,000 (King David Sponsorship — you bring nine of your buds, and get access to VIPs — although who the VIPs are is not mentioned. That guy rocking the Loki look, maybe?) Most unsettling was the $249 ticket called “sponsor a Holocaust survivor.” To do what?

Will the circle be unbroken?

The U.S. Commission on International Religious Freedom convened a hearing this week on “Global Efforts to Counter Anti-Semitism.”

Much of it was rehash of what already was being done before the alarming spike in attacks over the last year, including efforts to confront the boycott Israel movement that have little to do with the violence in Pittsburgh, Poway, Monsey and Jersey City.

New was the proposed four-point plan of action that Elan Carr, the State Department’s envoy to monitor anti-Semitism, says he relays to nations as a means of combating anti-Semitism: enhance security for Jewish institutions; punish hate crimes, even misdemeanors committed by juveniles; remove anti-Semitic content from textbooks; and confront hate speech on social media.

Jewish Insider reported that Carr, in a separate speech this week hosted by the UJA-Federation of New York at Central Synagogue, was tracking a convergence of white and black supremacist anti-Semitism. “There are far-right neo-Nazi groups [that] are undertaking internet campaigns to turn African Americans against Jews.”

Trump and Bloomberg are each shelling out $10 million for presidential ads during the Super Bowl. 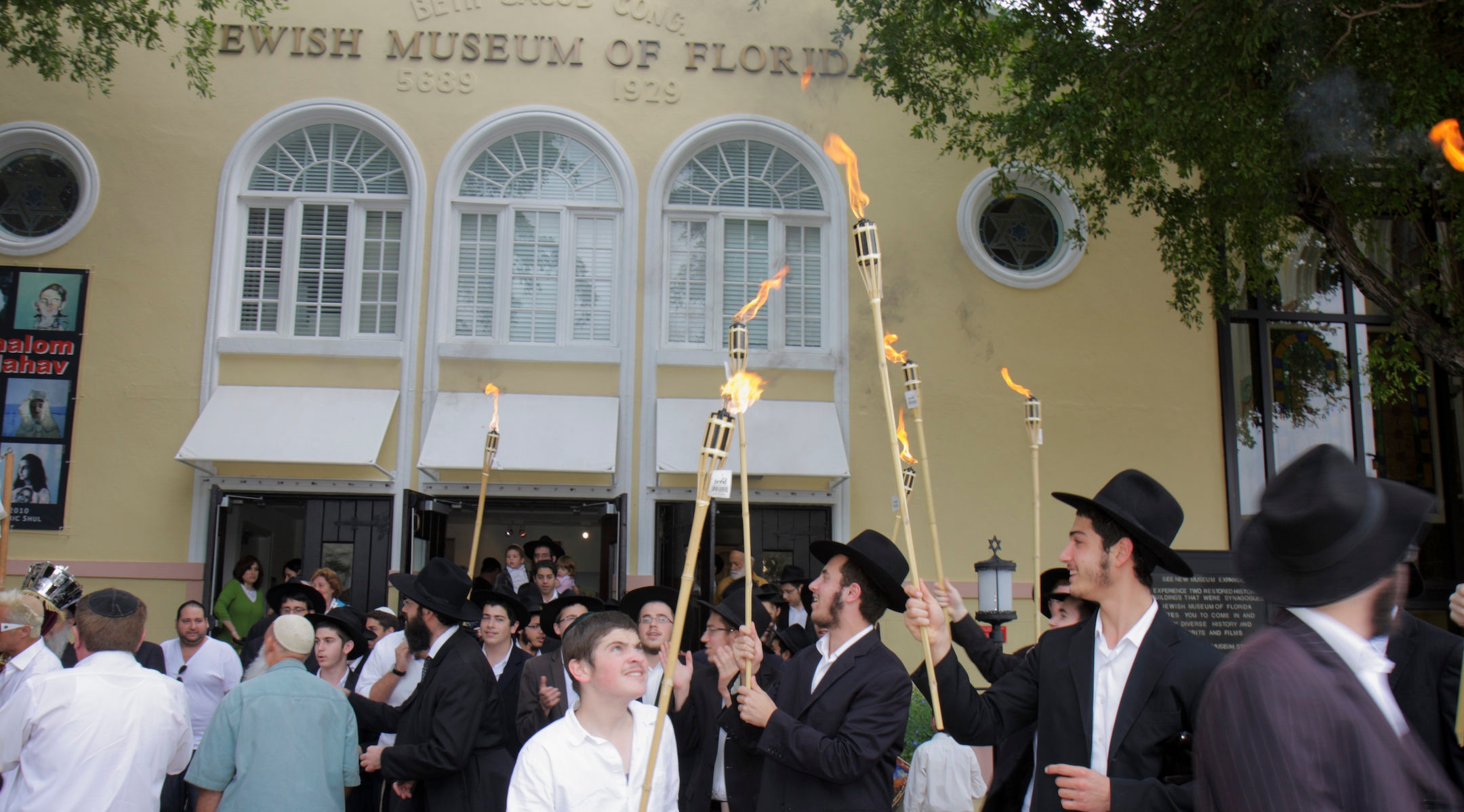 Men with lanterns outside the Jewish Museum of Florida. (Jeffrey Greenberg/Universal Images Group via Getty Images)

We routinely cover the communities like Monsey and Brooklyn and Pittsburgh that have been directly affected by anti-Semitic violence. Anthony Man at the South Florida Sun-Sentinel takes a dive into how that violence reverberates among a substantial Jewish population that has not been attacked. “What I see in my congregation is more and more people who are afraid to express their Jewish identity. They’re afraid to come to synagogue. They’re afraid to wear anything that’s self-identifying,” a South Florida rabbi tells him. 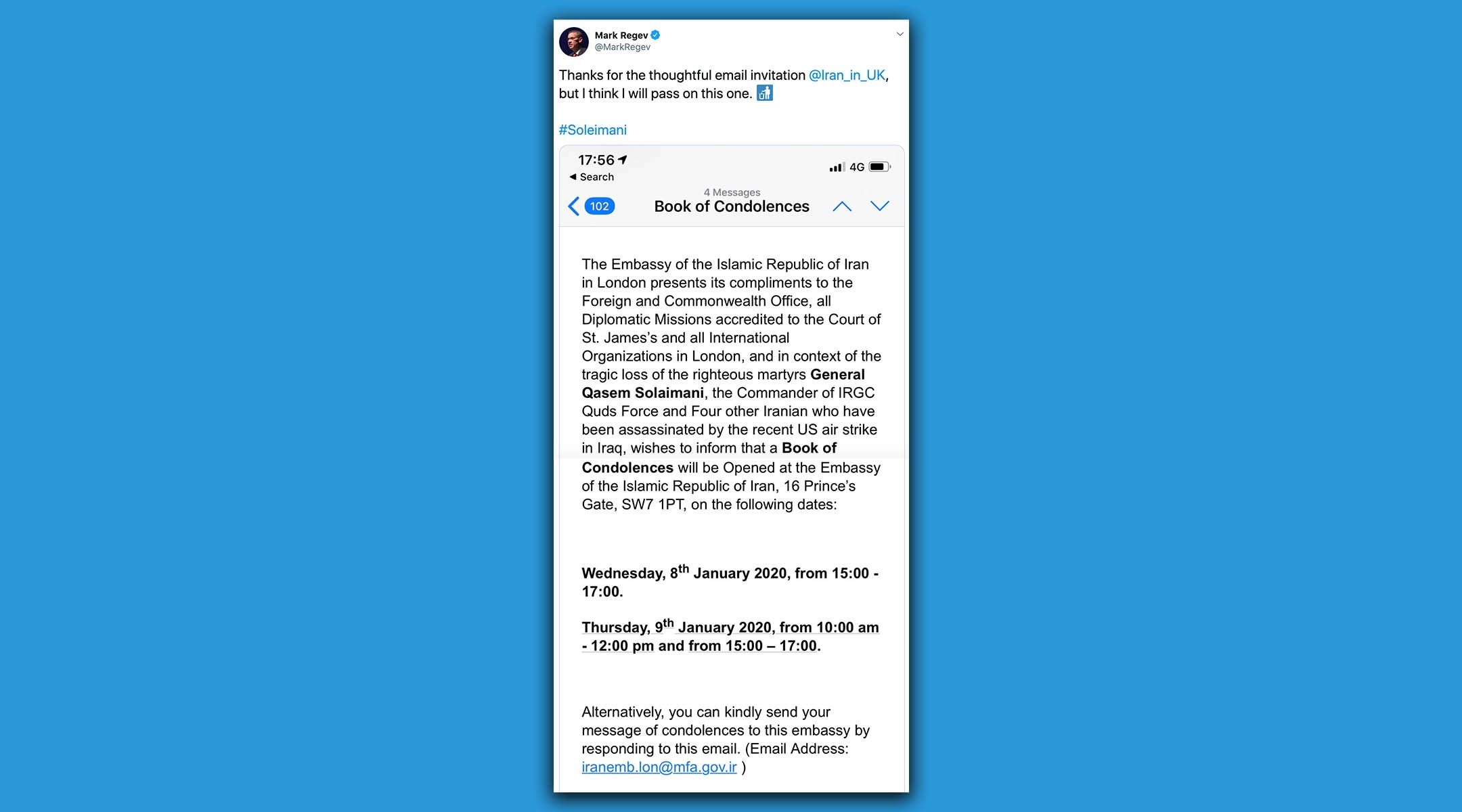 Mark Regev, Israel’s ambassador to the Court of St. James, gets an invitation to pay condolences, and wisely declines.