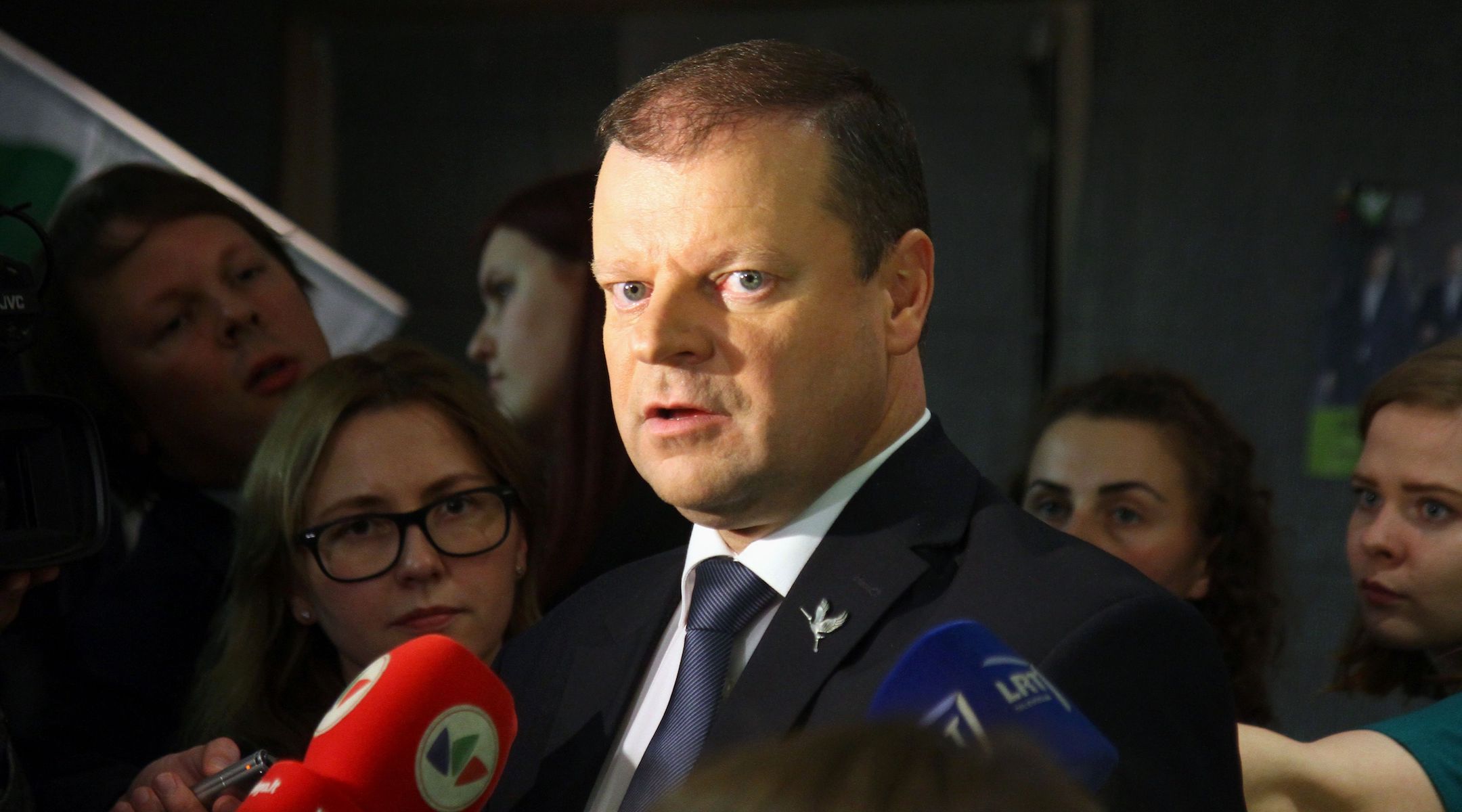 Prime Minister Saulius Skvernelis of Lithuania, seen in 2016, heads the committee drafting legislation declaring that neither Lithuania nor its leaders participated in the Holocaust. (Petras Malukas/AFP via Getty Images)
Advertisement

(JTA) — Poland passed a controversial Holocaust law last year that drew sharp international criticism and damaged its relations with Israel, United States and Jewish groups around the world. Many feared the law, which prohibited rhetoric accusing Poland of complicity in Nazi crimes — since the Nazis occupied Poland, Polish leaders argue — would hamper education and historical research of the genocide.

Those concerns and issues have not disappeared in the year since Poland passed the legislation. Despite several attempts to bury the hatchet, Polish President Andrzej Duda last week pulled out of a major Holocaust commemoration event in Jerusalem.

Some historians and survivors say the Polish legislation has encouraged other European nations with far more sinister Holocaust records to attempt to whitewash their own participation in the genocide.

One such country is Lithuania, where Nazi complicity was both widespread and a major reason why about 95 percent of the country’s 250,000 Jews were wiped out, according to major international research institutions about the Holocaust.

Trying to counter that narrative, a Lithuanian lawmaker for the ruling party of Prime Minister Saulius Skvernelis announced last month that a committee he heads is drafting legislation declaring that neither Lithuania nor its leaders participated in the Holocaust.

To Rosa Bloch, a 91-year-old survivor of the Kaunas, or Kovno, ghetto, the assertions are “so clearly false and outrageous that it could only have been the result of the Polish legislation,” she told the Jewish Telegraphic Agency.

“The Lithuanians saw it worked for the Poles, so they also went ahead,” Bloch said. 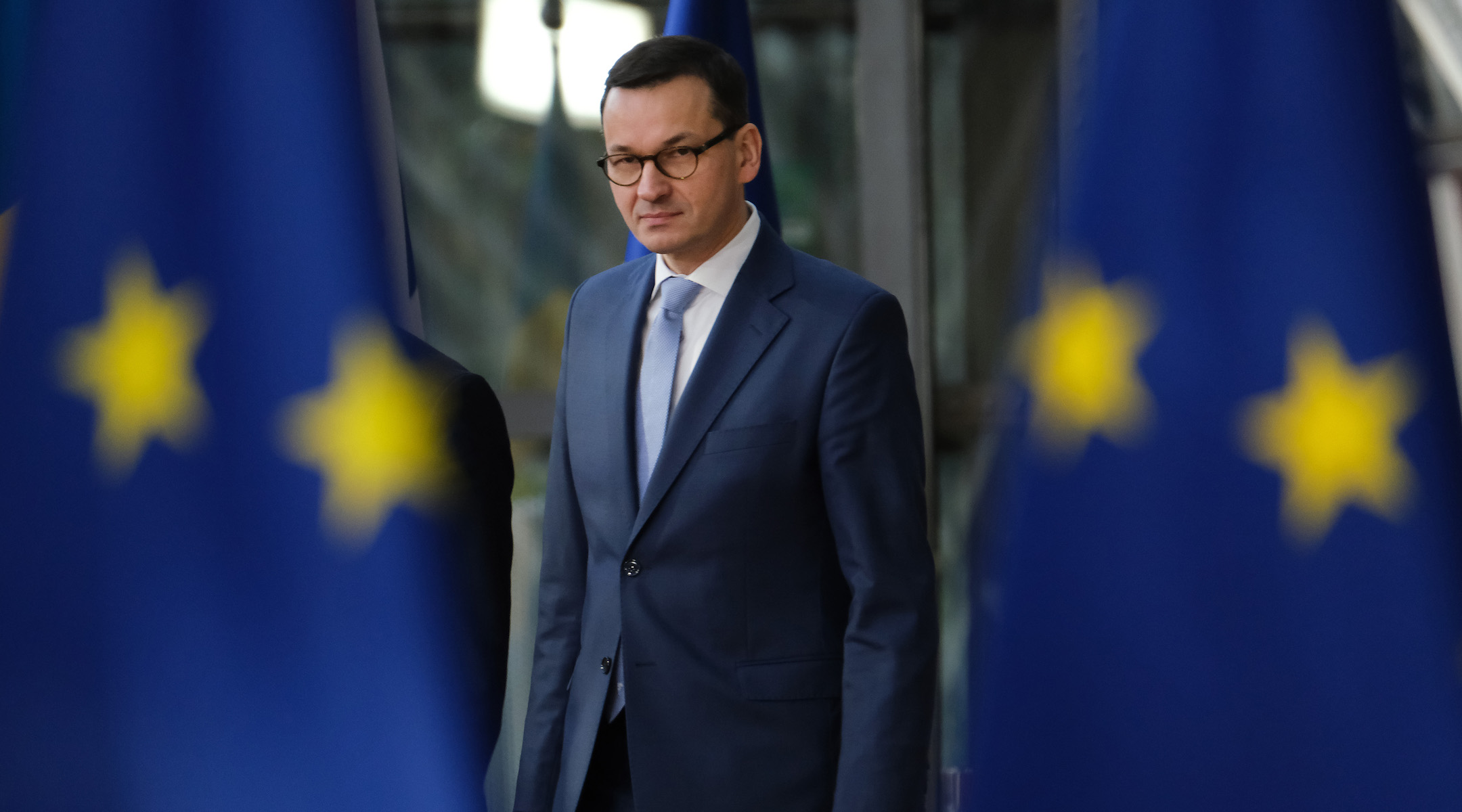 The Lithuanian push is perhaps more disturbing to Bloch than the Polish one “because the Lithuanians were active and cruel partners in the Holocaust. There isn’t a Lithuanian Jew alive who didn’t lose relatives to Lithuanian murderers,” she said.

The causality Bloch and many others see between the law in Poland and the legislation being contemplated in Lithuania is difficult to establish, but the projects are clearly connected.

In September, Gumuliauskas organized a meeting with Polish lawmakers about historical memory, referring to what he described as a common challenge.

“Today, when Lithuanian-Polish relations are good, third parties are trying to knock us over the head by using the prism of historical memory,” he said in an interview about the meeting. Gumuliauskas did not name the third parties.

The meeting, he added, was to promote “cooperation between historians of both countries in pursuit of common goals.”

Whatever the exact relationship between the Polish and Lithuanian pushes for exoneration – Gumuliauskas did not respond to JTA’s query on the matter — they are part of a broader effort on the part of Eastern European nations to emphasize their populations’ victimhood and contradict or diminish allegations of complicity in the Holocaust.

Whereas Western European societies have increasingly assumed responsibility for the persecution of their Jews, the opposite has happened in Eastern European nations, where education about the Holocaust was largely absent or lacking under communism.

Many in Eastern Europe today excuse their compatriots’ collaboration with Nazi Germany as “aimed at achieving independence from the Soviet Union” rather than to kill Jews, Michael Berenbaum, a former director of the U.S. Holocaust Museum’s research institute, told JTA. He also said that the Polish law was “encouraging” politicians in other countries to seek similar legislation.

Amid rising nationalism across the continent, governments in multiple Eastern European countries now celebrate Nazi collaborators, including perpetrators of the Holocaust, as patriotic heroes. 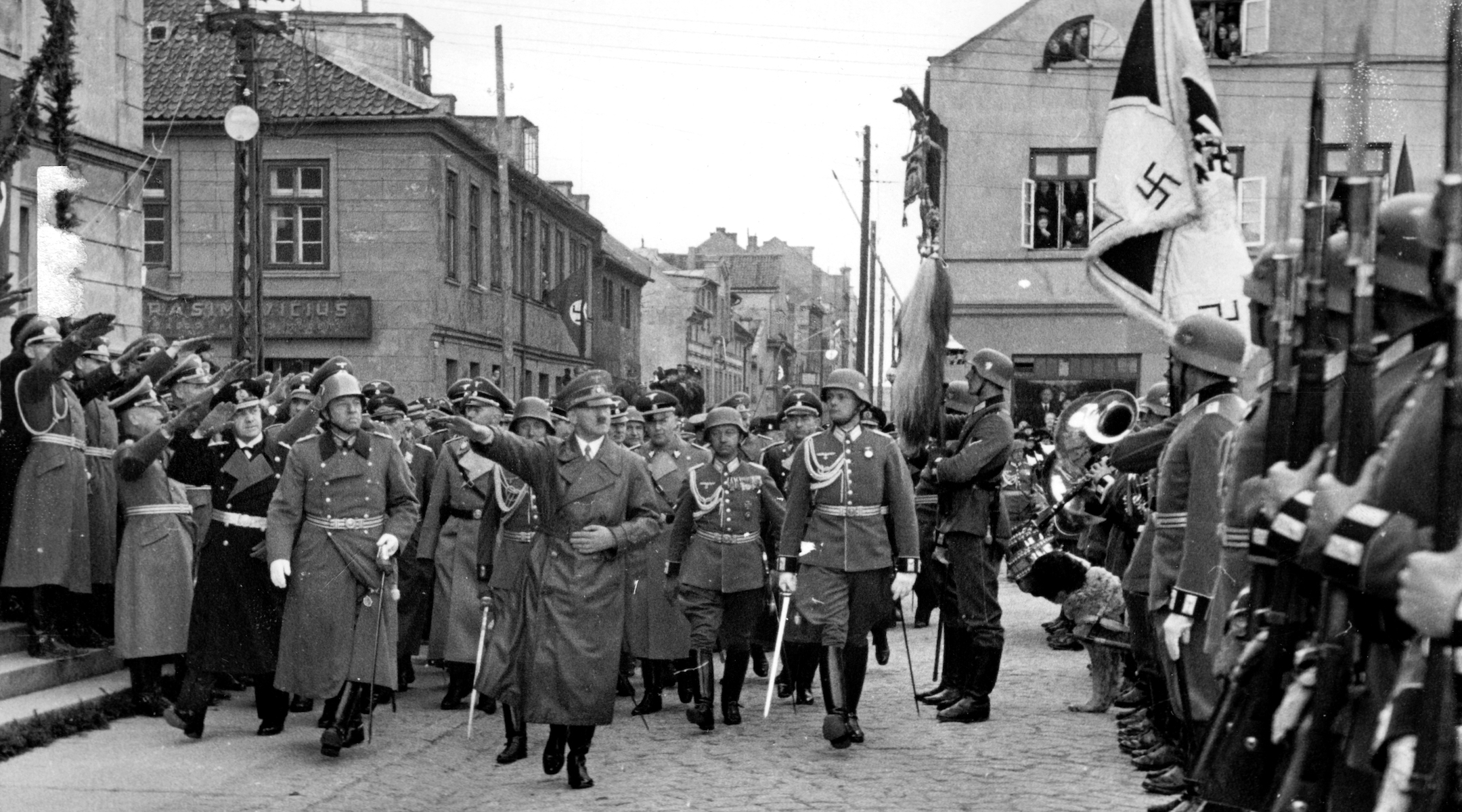 In Ukraine, the parliament passed a law in 2015 that praised “anti-communist partisans,” including Nazi collaborationists, and criminalized uttering “insults” about their memory. Streets there are named for collaborators Stepan Bandera and Roman Shukhevych, among others.

In 2014, Latvia introduced a law stipulating up to five years in jail for those who deny the role of “the foreign powers that have perpetrated crimes against Latvia and the Latvian nation” without mentioning the involvement of Latvian SS volunteers in murdering nearly all of the country’s 70,000 Jews. German SS veterans march annually through the streets of the capital Riga flanked by ultranationalist activists.

Back in Lithuania, a school is named for Jonas Noreika, a wartime leader who helped killed Jews.

Seen in this context, the proposed legislation in Lithuania is a trial balloon and “the next step in Holocaust distortion in Eastern Europe,” said Efraim Zuroff, the Eastern Europe director of the Simon Wiesenthal Center, who in recent years has focused on Holocaust history and revisionism in Lithuania.

If a nation with a Holocaust record such as Lithuania’s passes a law that exonerates it without significant diplomatic fallout, Zuroff suggested, “it could be a terrible sign for others.”

Ruta Vangaite, a bestselling author in Lithuania who has written about the Holocaust, said the law would be a “travesty.”

The remarkable brutality of anti-Semitic pogroms in Lithuania is another challenge for the law’s architects. One of the most infamous happened in Kaunas, where dozens of Jews were butchered by club-wielding locals at a bus garage. Some perpetrators posed for pictures over the tortured bodies of their victims while displaying the murder weapons.

From a historical perspective, Poland has a far stronger case than Lithuania for opposing allegations of complicity in the Holocaust, according to Zuroff.

In both countries, he said, the Holocaust would not have happened if not for the Germans. And in both, locals killed thousands of Jews during the Nazi occupation.

But Poland “didn’t exist as a country” when the Nazis occupied it, and its government in exile “didn’t encourage actions against the Jews.” In Poland today, expressions of admiration for Nazi collaborators are quite rare. 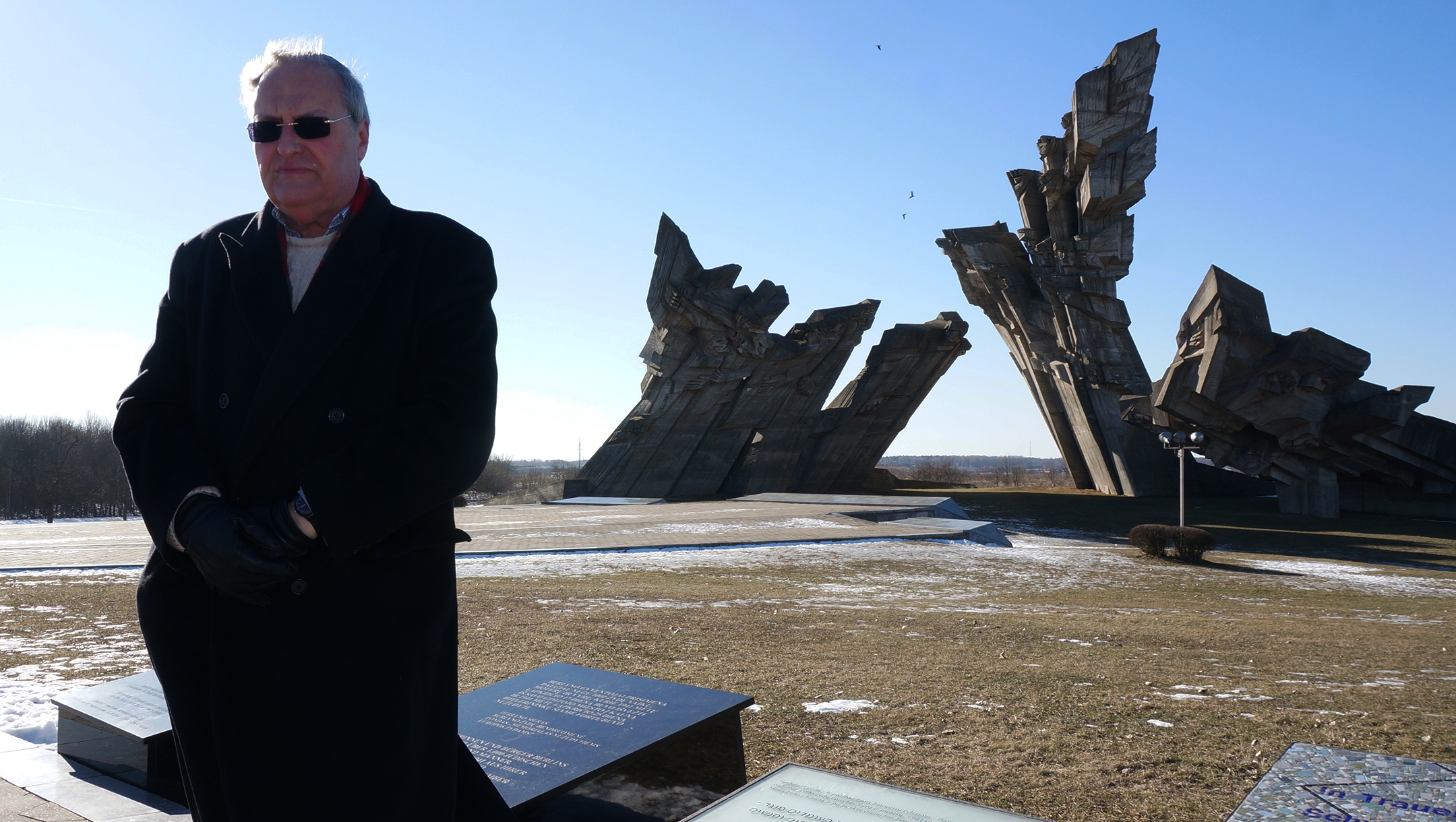 By contrast, the collaborationist Provisional Government of Lithuania was responsible for countless murders in the six weeks of its brief existence.

Language used by leading Holocaust historians about the two countries reflects that difference.

On Poland, Sara Bloomfield, director of the U.S. Holocaust Memorial Museum, wrote last year in a letter to the Polish president that “The Polish nation was the victim of German aggression and suffered an exceptionally brutal occupation. Characterizations – due to either ignorance or malice – of Polish responsibility for the establishment of Nazi concentration and death camps are unquestionably historically inaccurate.”

Bloomfield also mentioned the many Poles who saved Jews alongside many others who helped kill them.

Yad Vashem, Israel’s Holocaust memorial and museum, writes on Poland that “Facing a ruthless occupation and being engaged in a constant struggle for existence, the Polish public at large paid little attention to the immensely greater distress” of the Jews.

Both museums use different terminology about Lithuania.

“The Lithuanians carried out violent riots against the Jews both shortly before and immediately after the arrival of German forces,” a U.S. Holocaust Memorial Museum summary reads, noting that most of the country’s Jews had been shot during the brief lifespan of its Quisling government.

Lithuania is the only Nazi-occupied country noted by Yad Vashem for its people’s “enthusiasm” for collaboration with Germany. Even when this enthusiasm “subsided … hostility towards Jews and denunciation persisted,” the Jerusalem museum says.

“While nongovernmental organizations carry out important commemoration work, the main thrust of Holocaust education is done in the school system and by prosecuting perpetrators,” he said. “These are things only a government can do.”