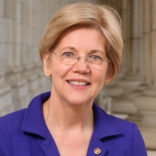 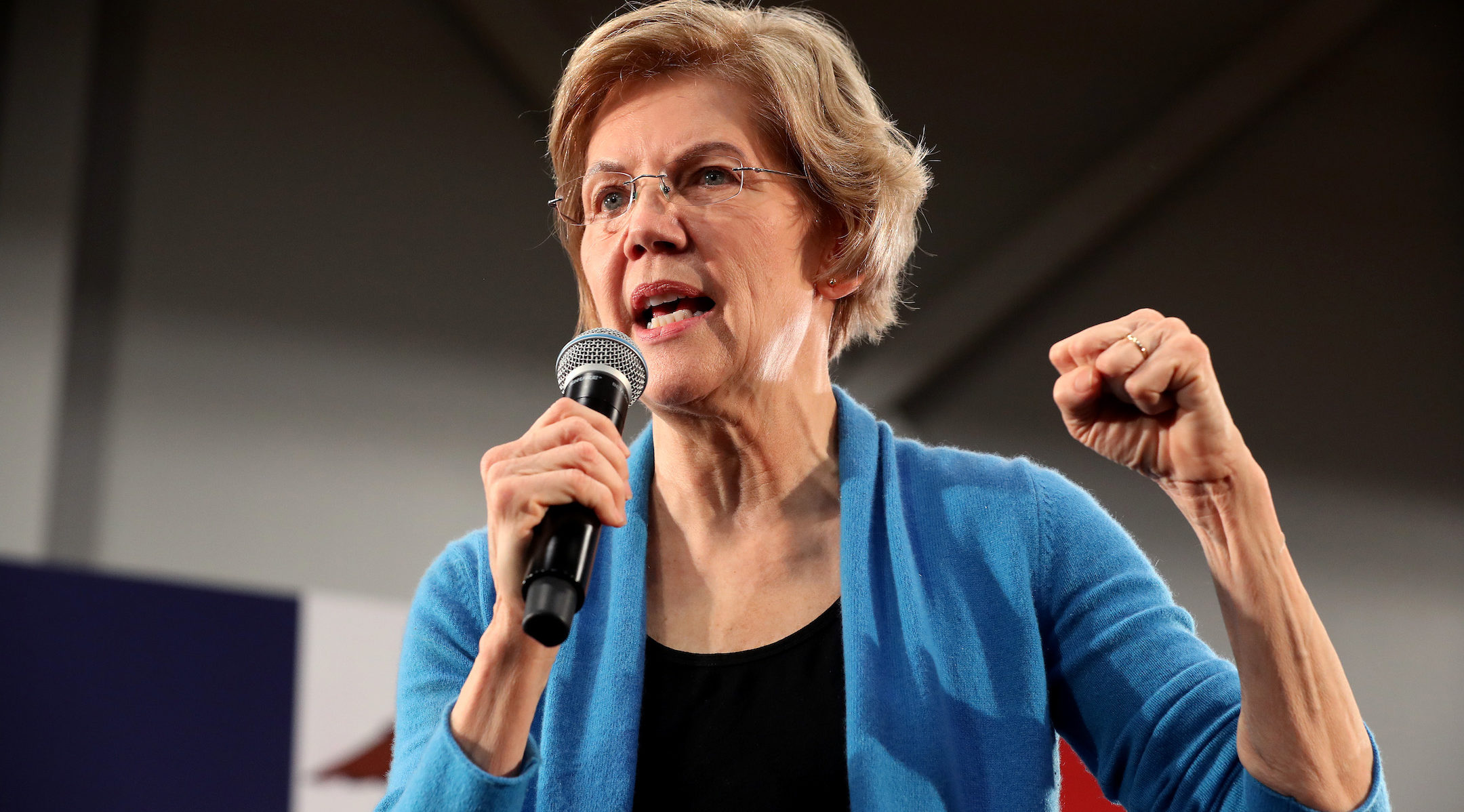 (JTA) — This is the fourth op-ed in a series of pieces about anti-Semitism and Jewish issues written by 2020 presidential candidates. This one is by Elizabeth Warren, a Democratic senator from Massachusetts.

The Jewish Telegraphic Agency has sent five questions about anti-Semitism and Jewish issues to all of the registered presidential candidates from both parties. You can read Joe Biden’s responses here, Pete Buttigieg’s responses here and Mike Bloomberg’s responses here.

1) Anti-Semitic hate crimes are currently on the rise across the United States. In 2018, there were two deadly shootings at synagogues in Pittsburgh and Poway, violent attacks now regularly plague the Jews of New York City, and Jews continue to be the target of most religion-based hate crimes across the country. In a few sentences, describe your plan to address the rise in U.S. anti-Semitism.

Our first president promised the early Jewish community in our country that “there shall be none to make him afraid,” welcoming them as equal citizens and pledging that bigotry would receive no foothold in our new nation. But just as so many of our foundational tenets have been challenged over the past few years, this commitment has also been shaken. Jews have been murdered in their places of worship, assaulted on the streets and subjected to hateful invective — simply because of who they are. Anti-Semitic incidents such as physical assault, vandalism and attacks on Jewish institutions surged nearly 60 percent in 2017, the largest single-year increase on record.

In the aftermath of the 2018 shooting at the Tree of Life Synagogue in Pittsburgh that killed eleven Jewish worshipers, I attended Shabbat services at Temple Emanuel in Newton, Massachusetts. The shooting was an act of pure evil, an attack on the Jewish community not just in Pittsburgh but all across our country. I attended to mourn the victims and to grieve with their families. But I also attended to worship with people who were determined to come together and reaffirm that we are one people, that we value each other. Attacks like the ones we have experienced in recent years are completely incompatible with American values. They are a threat to American safety and security. We can and must do better — and in a Warren administration, we will use every tool we have to do so.

As president, I’ll improve data collection on bias-motivated crimes and prioritize their investigation and prosecution. I’ll expand background checks and the use of extreme risk protection orders to keep guns out of the hands of those who would use them to provoke fear in Jewish communities. I’ll promote anti-bias education — including about manifestations of anti-Semitism and about the Holocaust — as an educational priority, and I’ll establish a commission to address incitement to violence on the Internet in a manner consistent with freedom of expression. I’ll work with state and local law enforcement to ensure that Jewish institutions and neighborhoods are safe and free from fear, and I’ll work with local community leaders to build trust and combat hate. And I will welcome every part of the Jewish community to my White House, celebrating the diversity of the community and its unshakeable place within our American community.

Anti-Semitism has no place in democracy. When our neighbors are being persecuted, or attacked, or treated unfairly, that impacts all of us. To take on hate, we all have to stand up against it — together.

2) A number of Democratic lawmakers have recently critiqued Israel in ways that some have characterized as anti-Semitic. What is the line between legitimate criticism of Israel and anti-Semitism to you?

We have a moral duty to combat hateful ideologies in our own country and around the world, and that includes anti-Semitism. In a democracy, we can and should have an open, respectful debate about the Middle East that focuses on policy.

Criticism that singles out Israel as uniquely worthy of censure can often be anti-Semitic in intent. At the same time, branding all criticism of Israel as automatically anti-Semitic has a chilling effect on our public discourse and makes it harder to achieve a peaceful solution between Israelis and Palestinians. We can speak out against the far-right-wing policies of the Netanyahu government, like annexation and settlements, while supporting Israel. What I don’t accept is when people on either side of the aisle criticize or commend Israel in terms that echo long-standing slanders against the Jewish people. Our leaders have a responsibility not to do that. And threats of violence — from any side — are never acceptable.

I believe in the worth and value of every Israeli and every Palestinian. And I believe that the way we respect all parties is through a two-state solution — an outcome that’s good for U.S. interests, good for Israel’s security and its future, and good for Palestinian rights, dignity and self-determination. To achieve this, there must be an end to the Israeli occupation and the creation of an independent and sovereign Palestinian state in the West Bank and Gaza Strip living alongside Israel.

Israel is a strong ally and an important friend. It has been a close partner in disrupting terrorism and in containing regional security threats. I am committed to Israel’s security and safety, and to working together to combat those shared threats. Unfortunately, the Trump administration’s approach has made a two-state solution harder to achieve. His one-sided “peace plan” is a rubber stamp for annexation and offers no chance for a real Palestinian state. As president, I’ll take immediate steps to fix the damage and reestablish America’s role as a credible mediator.

Today the continued expansion of Israeli settlements and the increasing normalization of proposals for Israel to annex parts or all of the West Bank are the most immediate dangers to the two-state solution. These are policies that have been aggressively pursued by Benjamin Netanyahu and his allies, but also by successive Israeli governments for years. I oppose unilateral annexation in any form — and I will reverse any U.S. policy that supports it. If Israel’s government continues with steps to annex the West Bank, the U.S. should make clear that none of our aid should be used to support annexation. At the same time, I will also address anti-democratic practices and corruption within the Palestinian Authority that have fed a sense of disillusionment inside the Palestinian Territories. And we must unequivocally press all sides to refrain from violence or incitement to violence.

4) Is there any part of American Jewish culture, or Jewish figure from history, that has been particularly meaningful to you in your life?

Jewish leaders have always contributed to the fight for social justice in our country, and I take inspiration from a long legacy of activists and advocates that drew strength from their Jewish faith.

I think about Rose Schneiderman and her efforts to defend the rights of workers, particularly women and immigrants. Out of the ashes of the 1911 Triangle Shirtwaist factory, Rose organized a movement of women laborers to fight back. She fought against dangerous and squalid conditions, and for labor protections, shorter hours, and higher pay. And she built a movement, inspiring others to join the fight and telling them that “The worker must have bread, but she must have roses, too.” It was in honor of Rose and her fellow activists that I launched my campaign for the presidency in Lawrence, Massachusetts, the site of the Bread and Roses labor strike.

I also think about Supreme Court Justice Louis Brandeis. He used the power of the law to rein in big corporations and dismantle monopolies, and to fight back against rampant wealth inequality in our country. It was Justice Brandeis who warned that “We can have democracy in this country, or we can have great wealth concentrated in the hands of a few, but we can’t have both.” Just like today, the fights to break up powerful trusts were ferocious — but democracy eventually prevailed, and corporations were denied the power to write their own rules.

5) Have you participated in a Passover Seder or other Jewish holiday ritual? If so, what were the circumstances, and what was the experience like for you?

During my time as a Senator, I have been fortunate to participate in seders to celebrate the Passover holiday in communities across Massachusetts. It is a special privilege to be invited into someone’s home and to gather with friends and family to celebrate shared values. Passover is a holiday that requires us to reflect on history and tradition as we relive the story of the Jewish people’s journey from slavery to freedom. But it is also a holiday that requires us to renew our courage to fight for freedom and justice — not only for ourselves, but for the homeless, the oppressed, and the vulnerable in our communities and around the world — today and every day.

Elizabeth Warren
is a Senator from Massachusetts and a Democratic candidate for president.
The views and opinions expressed in this article are those of the author and do not necessarily reflect the views of JTA or its parent company, 70 Faces Media. 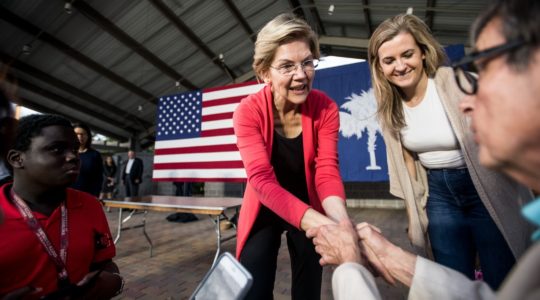 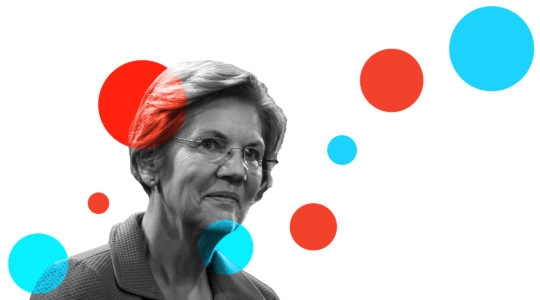 Where does Elizabeth Warren stand on anti-Semitism, Israel and other issues that matter to Jewish voters in 2020?