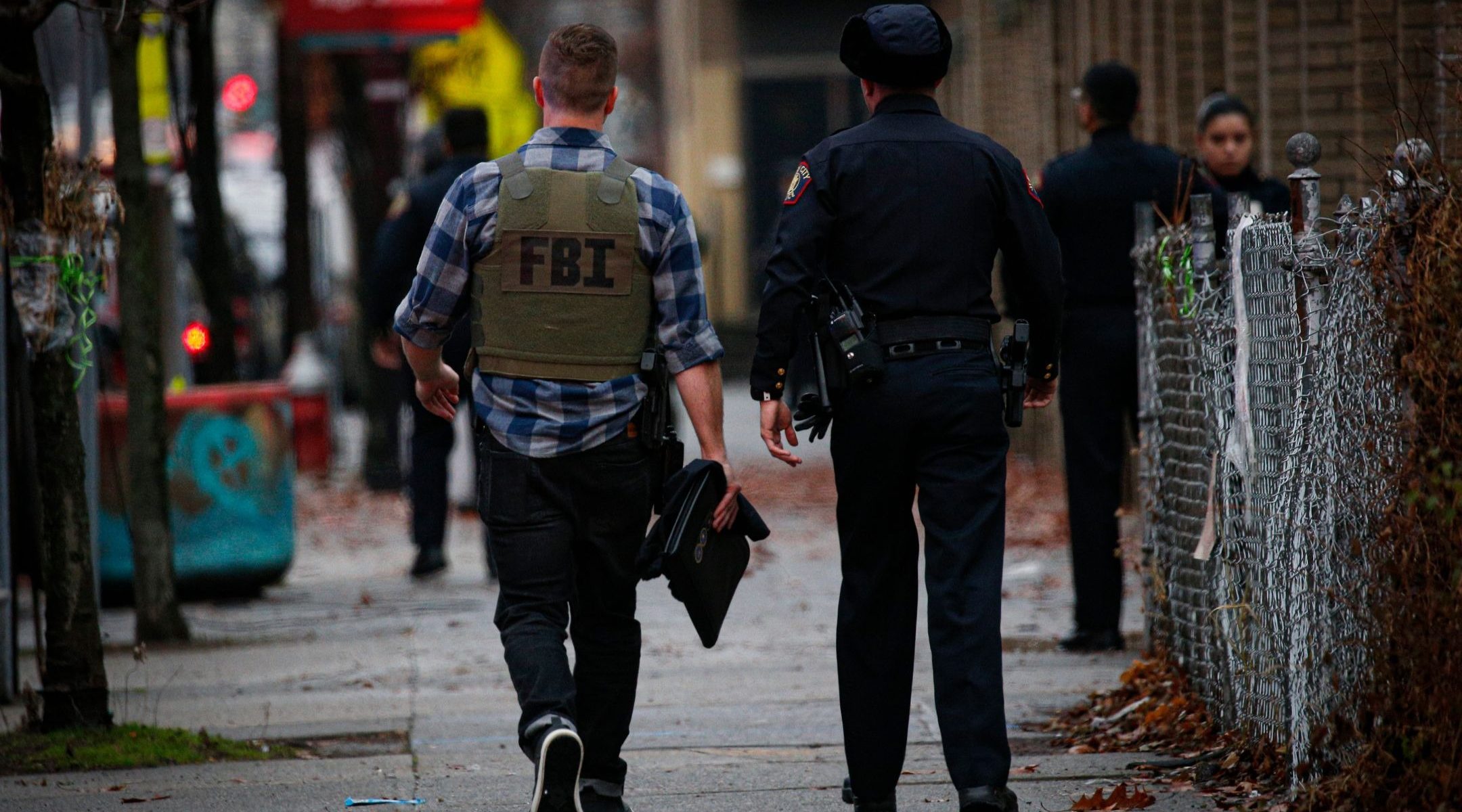 A FBI officer arrives at the scene of an active shooting in Jersey City, N.J., Dec. 10, 2019. (Kena Betancur/AFP via Getty Images)
Advertisement

WASHINGTON (JTA) — For the folks who monitor anti-Semitism, a pandemic-induced nightmare nearly became real this month.

A Massachusetts man was arrested for trying to set off a firebomb near the entrance of a Jewish home for the elderly.

He got the idea, federal authorities said, from the internet.

The incendiary device was planted near Ruth’s House in suburban Springfield, in western Massachusetts, on April 2. That was a day before the date designated as “Jew killing day” on a thread on white supremacist social media allegedly read by the suspect. The preferred target, the thread said, was a “Jew nursing home.”

Jewish security insiders have been fretting since January about the possible dangers of a pandemic. Chief among them: that spiking online activity during quarantine would bring more people in contact with the toxic brew of racism, anti-Semitism and the glorification of violence that occupies the dark corners of the web.

Jewish officials who track anti-Semitism are concerned that “a more captive audience, more people spending time online, the ability for these messages to resonate with certain people” could increase, said Oren Segal, the vice president of the Anti-Defamation League’s Center on Extremism.

Amy Spitalnick, who directs Integrity First for America, a group that litigates against white supremacists, said a cohort of extremists with time on their hands posed the risk of increased and more sophisticated attacks.

“All of these people are staying at home online and have all the time in the world to take part in these attacks and spread their hate and plan,” Spitalnick said.

Michael Masters, who directs the Secure Community Network, the security arm of national Jewish groups, said the April 15 revelation of the arrest made concrete the worries his group had been relaying to its constituents across the United States since January, when SCN started considering the pandemic in its bulletins.

“This incident goes exactly to our short- and long-term concerns: the increased anti-Semitism, fomenting hatred and incitement to violence in online forums and on platforms that motivates, encourages or supports individuals to potentially take action against our community,” he said. “This is not conceptual.”

While the volume of anti-Semitic expression has increased online, and in at least two cases has spurred white supremacists to action, Masters said that other manifestations of anti-Semitism, like vandalism and graffiti, have not increased since the pandemic.

Here are some of the ways that the pandemic has changed, and potentially amplified, the threat of violent white supremacists.

Ten days before the attempted attack on Ruth’s House, Timothy Wilson was shot dead by FBI agents serving him with a warrant. The pandemic presented the known white supremacist, who blamed Jews for the coronavirus, with an opportunity.

Most gathering places, including synagogues, have been closed because of the pandemic. But Wilson, the FBI said, was planning a truck bomb attack on a large hospital in the Kansas City area, in part because of the mass casualties the pandemic would guarantee.

Wilson, who had contemplated attacking a synagogue among other targets, “decided to accelerate his plan to use a vehicle-borne improvised explosive device in an attempt to cause severe harm and mass casualties,” according to the FBI’s alert.

Segal said the same logic applied to the chatter allegedly heeded by the Massachusetts suspect, advising attacks on Jewish homes for the elderly. Senior homes have made news as coronavirus hot spots.

“It’s doubling down,” he said. “Who are the most susceptible, the most threatened by this pandemic — it’s older people.”

“Starting in mid-January, we were identifying on our duty desk a lot of historic anti-Semitic tropes related to viruses and disease, bubonic plague and post-bubonic plague,” he said. The tropes “from the Middle Ages were resurrected related to the coronavirus, and it broke down to ‘the Jews are spreading it, the Jews are responsible for it and intending to spread it for monetary gain.’”

Accusations that Jews are profiting from the pandemic have been circulating for months on social media favored by white supremacists, like Telegram and Gab, and then breaking through to mainstream platforms like Instagram and Twitter. Rick Wiles, a Christian pastor who runs a far-right news site, TruNews, said last month that the pandemic was simultaneously God’s means of punishing the Jews and spread by them.

Accusations that Jews spread contagion date to the centuries before Christ and flourished throughout the Black Plague in the 14th century.

The preeminent targets of bias attacks during the pandemic have been Asians. Early on, an array of Jewish groups condemned the phenomenon.

There has been chatter on white supremacist social media suggesting attacks on Jewish and other sites using the virus by licking doorknobs or violating social distances to spread disease.

“Go to synagogues, travel to Israel, wear a kippah and cough on people” were some of the scenarios that Masters said he has seen.

Masters said the threats to weaponize the virus itself seemed to be more trash talk than actual planning. Nonetheless, he said, they were emblematic of how the association of the virus with Jews was metastasizing among white supremacists.

“What we assess in our conversations with law enforcement [is that] rather than being indicators of what people were going to do, it’s a troubling narrative arc from white supremacists,” he said.

Another facet of the pandemic landscape is “Zoombombing,” malicious intrusions of the online gatherings that have replaced in-person ones for now.

National and local Jewish organizations and synagogues have held webinars instructing constituents and congregants on how to set up barriers to the intruders. The ADL has consulted with Zoom, which has added protections.

Masters said the phenomenon was as much a manifestation of white supremacism as it was malign mischief-making.

“It’s what they say about idle hands being the devil’s workshop, people will exploit weaknesses where they can — those who are trolling, and those who have a desire to scare the community,” he said.

Masters said that Jewish Americans may also be more susceptible to the fears stoked by expressions of anti-Semitism because the pandemic is keeping people in isolation.

“Incidents of anti-Semitic vandalism and graffiti have been no more pernicious than normal,” he said. “We see that sort of harassment and anti-Semitism regularly. But it is psychologically impactive to the community because the community is closed and everyone is vulnerable and socially isolated.”

The pandemic may go but the sickness remains

Jewish Americans already were facing “the most complex and dynamic threat environment we’ve ever seen facing the Jewish community in our nation’s history,” Masters said, describing the wave of violent attacks on Jewish community targets in the year or so before the pandemic hit, including two deadly assaults on synagogues.

The social upheaval that undergirded those attacks will manifest at exponentially greater levels as we get out of the pandemic, he said, with massive increases in unemployment creating more alienation and people who may look for scapegoats for their misfortune. At the same time, Jewish institutions will be cutting back expenses, possibly in security.

“As we reconstitute services and open the doors to congregants, JCC members, and students get back on campuses, with that increase in online hate speech as an excuse to spread anti-Semitism and hatred, there is a real concern that the individuals susceptible to that message will see our community get back to work, and they will pick up that call to violence and take action,” Masters said.

Spitalnick, whose group is suing the organizers of the deadly 2017 white supremacist march in Charlottesville, Virginia, noted that they were able to exploit online platforms to spread their message of hate ahead of the march.

She said more must be done to prevent the current moment from magnifying those opportunities.

“Our Charlottesville case shows social media enabled and allowed some of the violence to happen,” Spitalnick said. “There needs to be an approach that brings in the private sector instead of playing whack-a-mole in which we take them off from one site and they go to another.”