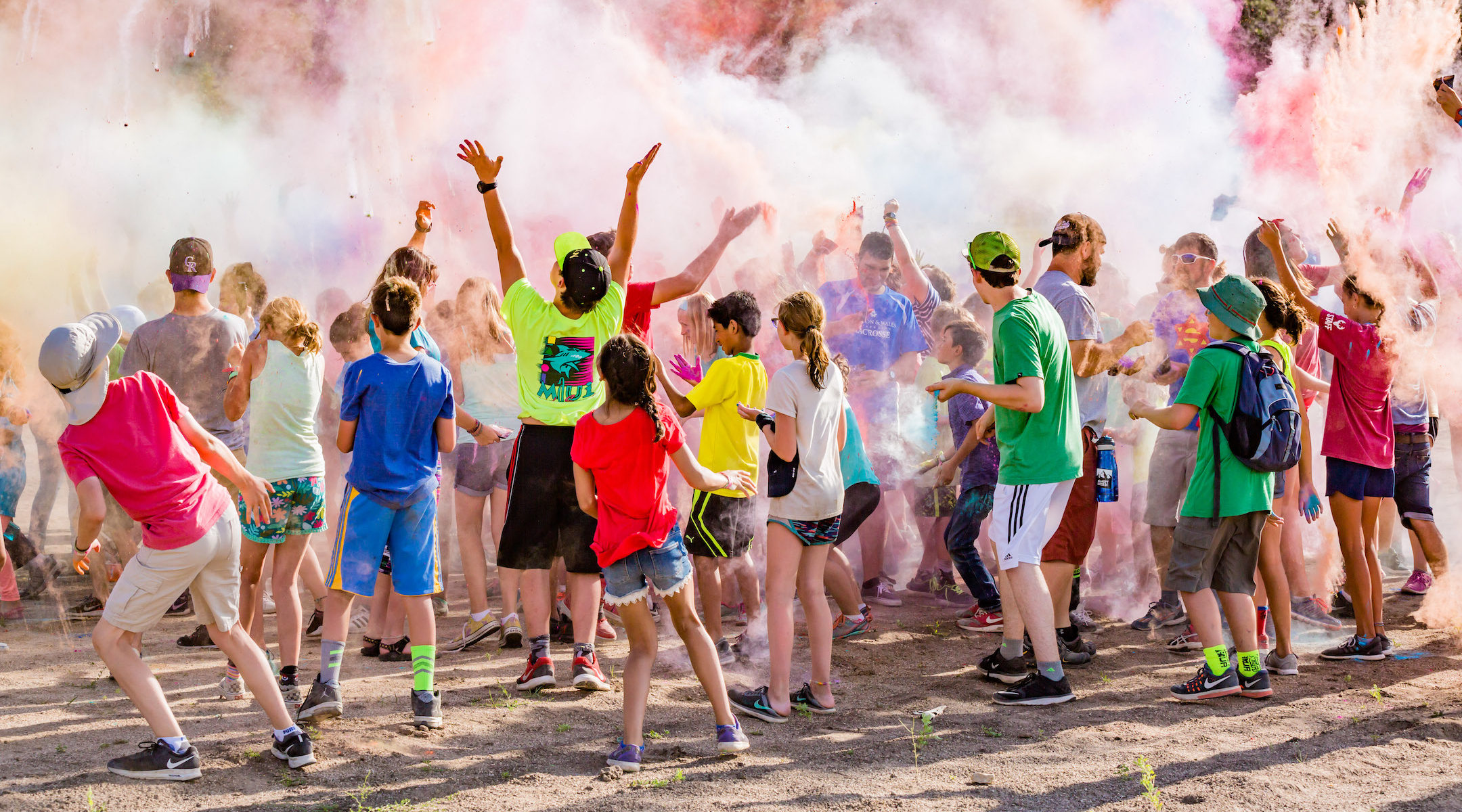 Like many camp activities, the 2017 color war at JCC Ranch Camp in Colorado involved crowds of kids. This year, with its summer session canceled, the camp is becoming a family camp with socially distanced activities. (Noah Gallagher)
Advertisement

(JTA) — Every summer, tens of thousands of American Jewish kids leave their homes, board buses and planes, and spend a month or two together on a campground in the middle of nowhere.

They might not go to synagogue at all during the rest of the year, but on Friday nights, they and their friends will dress in white, gather by a lake and pray together to welcome Shabbat.

Regardless of what they eat at home, all of their meals will be kosher. They may even go to a daily Jewish class.

And during the rest of the day, whether they’re playing soccer, swimming, carving wood or just hanging out, these young Jews will pepper their words with Hebrew, talking about their madrichim (counselors), a trip to the mirpaah (infirmary) or what they’re doing for their next peulah (activity).

A 2013 study found that more than a third of American Jews have attended Jewish overnight camp. In many cases, children attend the same camps as their parents.

“My camp prided itself on its return rate,” wrote Maddy Albert in an essay on the Alma website about her initial feelings regarding camp. “The familial utopian feeling comes with a tacit agreement that you won’t leave, and when you have to go back home at the end of the summer, you will be heartbroken.”

This year, the heartbreak has come early.

Due to the COVID-19 pandemic, dozens of camps have announced that they are canceling their summers for the first time, with more expected. Some American states are barring overnight camps, and other camps are making the choice that because kids are used to living in close quarters at camp and running around with few limits, social distancing would be nearly impossible.

As camp is all about doing stuff together, those that have canceled are struggling to figure out how to replicate their summer experiences in a world where gathering and physical contact are prohibited, and people are encouraged to stay in their homes.

Some camps are looking into converting their grounds into family retreats, so families can conduct socially distanced activities together. Others are considering how to create a virtual camp.

“Tents, cabins, dining halls, sports courts, and praying places will remain empty; Torahs won’t be unscrolled; songs will remain unsung; the grass will stay green from a lack of foot traffic,” wrote Rachel Bear, a former camper and counselor, in an essay on Alma. “The loss of Jewish summer camp, while comparatively insignificant in the grand scheme of this horrific pandemic, is still a tremendous loss.”

The camps bring Jewish kids to a secluded green space, usually in the woods, far from the city, where they live in cabins with each other under the supervision of counselors who are just a few years older than them. Most campers, who are anywhere from 7 to 16, will see their parents only once during the entire time they’re at camp.

At camp, kids will participate in a mix of activities — from sports to arts and crafts to swimming to woodworking — and have plenty of free time. Some camps are more specialized, focused on athletics or hiking and climbing or tech.

Part of the appeal — for parents and American Jewish leaders — is that camp aims to make Judaism fun. While some camps have a heavy dose of prayer, Jewish study and strict kosher observance, campers do those things in the sun and near the water and soccer field. They’re wearing T-shirts and shorts while hanging out with their friends.

A 2008 study by the Foundation for Jewish Camp found that going to camp is an indicator for Jews to be more involved in an array of Jewish experiences. Adults who attended Jewish camps as children were more likely to go to synagogue, marry a Jew, donate to a Jewish charity, light Shabbat candles and feel attached to Israel.

“The core elements are a sense of community, a sense of Jewish connection and a sense of adventure,” Carine Warsawski, a Jewish camp alum who now runs retreats at Jewish camps for adults, said in 2017. “When you finally get to explore and try new things, and see what you like, and make your own choices, that’s how you start to form who you are.”

The first Jewish camp was founded in 1893 as masses of Jews were immigrating to the United States from Eastern Europe. Camp provided a fresh-air refuge from the crowded urban neighborhoods where Jewish immigrants settled, and they proliferated in the 1920s. At first, the point of camp was to make Jewish kids more American, not make American kids more Jewish.

“The early Jewish camps were motivated by two concepts: bring inner-city kids out to the country, and ‘Americanize’ the children of Eastern European immigrants,” according to an article on the history of Jewish camps. “What made these camps Jewish was their demographics, not their programming.”

That changed beginning in the 1940s, as Jewish religious movements like Conservative and Reform Judaism started their own camps. Since then, the main goal of Jewish camp became Jewish experiential education.

Nowadays, many Jewish camps place a particular emphasis on Zionism and Israeli culture. Many camps will bring in contingents of young Israelis to work at camp. A few camps have Hebrew immersion programs. At others, it’s common for kids to sing Hebrew songs, do traditional Israeli dances and have staff mix some Hebrew words into their daily announcements.

Some camps — with their communal living, outdoorsy spirit and Hebrew culture — aim to mimic the traditional values of Israeli kibbutzim, or at least the socialist kibbutzim of a couple generations ago. Some networks of camps take their oldest campers on a summerlong trip to Israel.

“Zionism is a central part of our core mission, as we nurture within our campers and staff members a deep and enduring love for Israel,” the leaders of the Conservative Jewish camp network Ramah wrote in an open letter in 2018. “Hebrew is a central element of daily life at Camp Ramah, and our campers and staff members spend significant time in Israel.”

But this year is different. As summer nears, it’s becoming increasingly clear that for many campers, summer as they’re used to it will not be happening, and one of the core parts of American Jewish life will be temporarily on hold.

“We have been holding onto hope that it might be possible for us to still get back to camp this summer,” Geoff Menkowitz, director of Camp Ramah Darom, said in a video message in April announcing the Georgia camp’s 2020 cancellation. “It has become clear that camp as we know it and love it is not possible right now.”