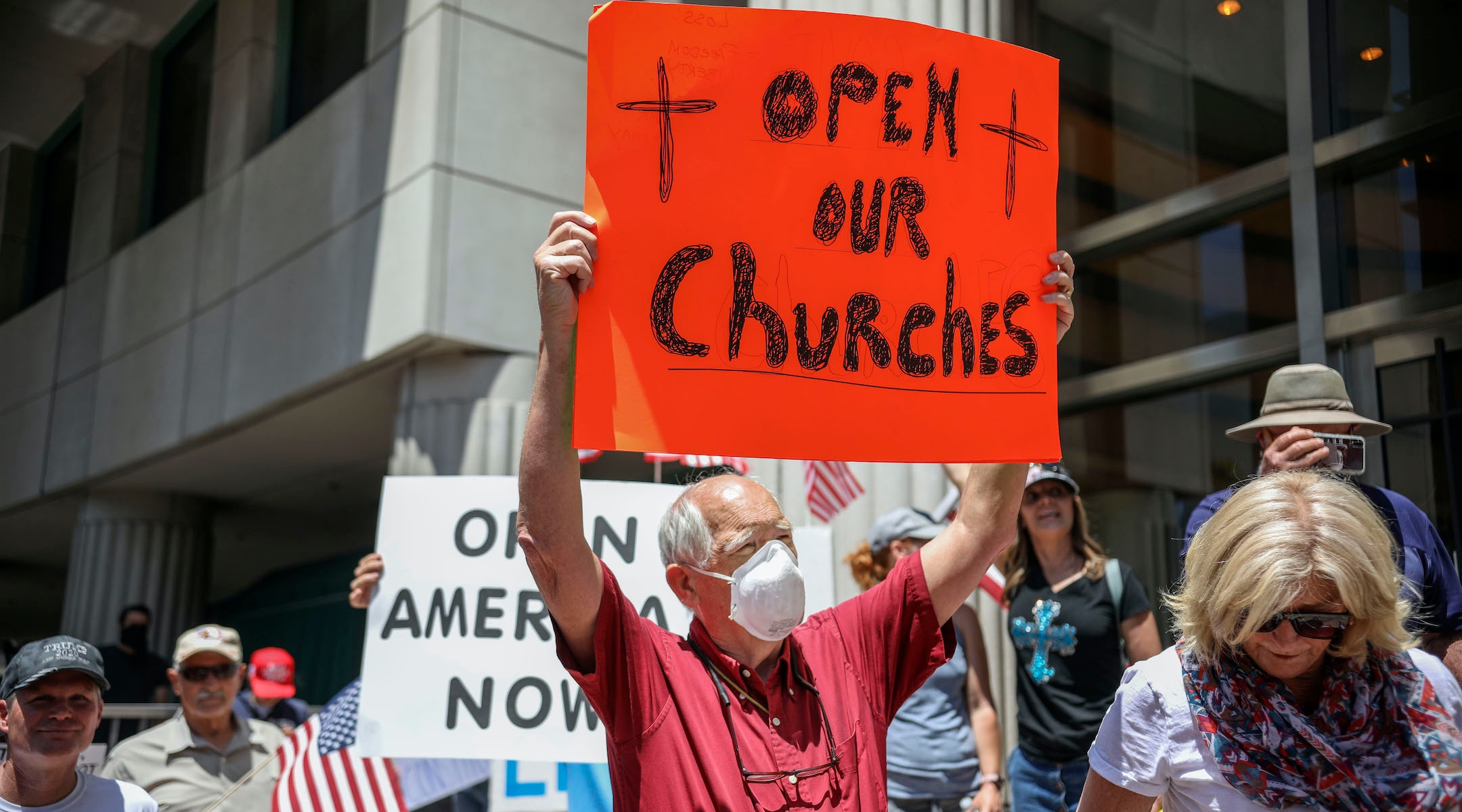 (JTA) — President Donald Trump wants synagogues and other houses of worship to open their doors — but many Jewish leaders say his pressure won’t affect their timelines.

The president went on the offensive Friday, telling governors that he would override them to require houses of worship to be allowed to reopen after closing to stop the spread of the coronavirus. (He does not have that authority.)

“Today I’m identifying houses of worship — churches, synagogues and mosques — as essential places that provide essential services,” Trump said during a White House news conference. “Some governors have deemed liquor stores and abortion clinics as essential, but have left out churches and other houses of worship. That’s not right.”

Trump was taking a firm stand in an emerging battle over whether religious services should be considered “essential.” As stores and restaurants reopen in some places, religious leaders have questioned why they cannot gather people as well.

But mounting evidence suggests that religious services, with people of all generations singing together in confined spaces, could provide a perfect storm for coronavirus transmission. And Jewish leaders from all denominations rejected Trump’s entreaty Friday afternoon, even as debate over how and when to resume services has begun to divide some observant communities.

The leader of the Reform movement released a statement in response to Trump’s remarks saying the country’s largest Jewish denomination “will continue to look to the wisdom of medical professionals to guide us on when reopening our synagogues can be done safely in keeping with our values.”

“While we long to gather in person, we believe that there is no higher value than pikuach nefesh, saving a life,” said Rabbi Rick Jacobs, president of the Union for Reform Judaism.

Rabbis from other denominations responded on social media in the hours before Shabbat. “Yes, our synagogue is essential. We are open,” wrote Rachel Blatt, the rabbi of Congregation Kol Ami, a Conservative synagogue in Tampa, Florida, on Facebook. “The building we meet in, however, is closed. Join us on zoom where we have been and continue to pray, to study, to sing, and to gather safely.”

The responses were in keeping with how most synagogues have handled the path to reopening up to now. Many synagogues were quick to close once the pandemic hit and have remained closed even as governors have relaxed restrictions. 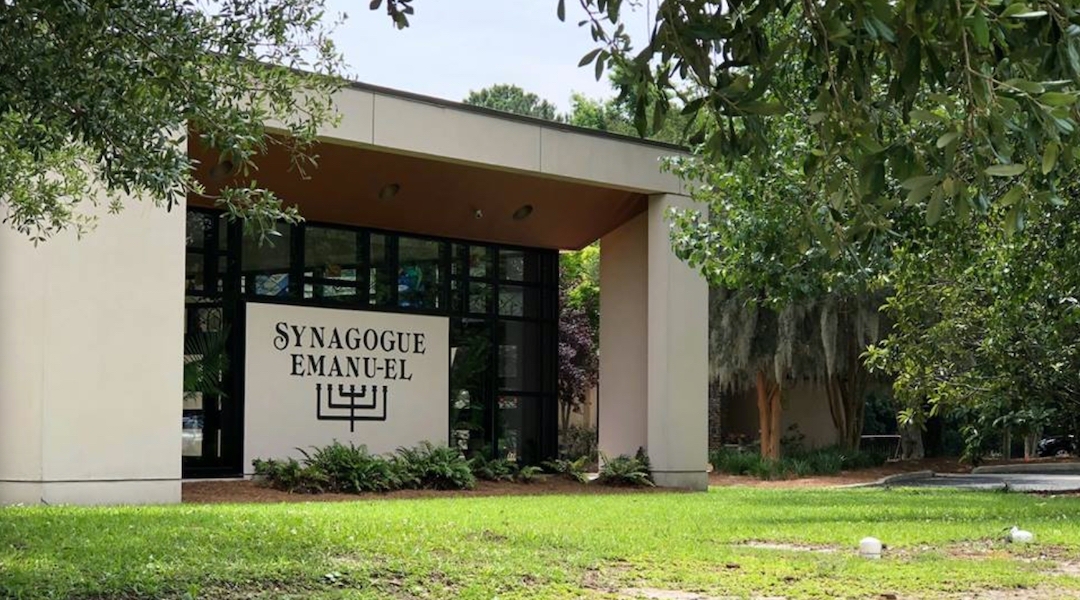 Like many other Jewish communities, Synagogue Emanu-El in Charleston remained closed even after South Carolina allowed houses of worship to reopen. (Google Street View)

That was true in Georgia, Texas and South Carolina last month as those states became the first to reopen.

This week, as more states began lifting restrictions, Jewish leaders again rejected imminent reopenings. Rabbis in Massachusetts said they would not resume services after the governor there added houses of worship to the first phase of the state’s reopening plan. Rabbis in Minnesota and Riverdale, a heavily Jewish area of the Bronx in New York City, also rebuffed looming invitations to hold small-scale services in open letters this week. And the Orthodox Union reiterated its guidance to wait at least two weeks after reopening before holding in-person religious services, to make sure cases do not rise.

Yet in some Orthodox communities, where online services are not possible on Shabbat and do not allow people to fulfill certain obligations during the week, tension has continued to deepen over whether to allow limited communal prayer.

In Cleveland, where rabbis openly disagreed with each other last week over whether to allow outdoor prayer services, dozens of local Jewish doctors this week issued an open letter emphasizing that the coronavirus can spread even if people all wear masks.

And after New York state began allowing gatherings of up to 10 people this week, a group of 27 rabbis on Long Island sent a letter to congregants reiterating their decision to wait at least 14 days before resuming services. They had sent an initial letter last week amid disagreements over whether to allow services to resume outdoors with participants joining together from their own yards and porches.

In a few places, some synagogues are indeed taking steps back toward communal prayer. Some Atlanta-area Orthodox synagogues held services in their parking lots this week, the Forward reported. In Brooklyn, the New York Times covered a prayer service with 10 men on Friday at the Aliya Institute in Crown Heights. And in South Florida, one Orthodox rabbi, Efrem Goldberg, penned an emotional ode to his synagogue, Boca Raton Synagogue, outlining what its outdoor services would look like.

“This coming week, if all continues to go well, we will return to your campus, but we still cannot enter your premises,” he wrote. “We will be together in makeshift minyanim, but we will still be separated by at least 8 feet. Instead of hugs or handshakes, we will be lucky to say hi. Instead of a reunion, we will experience a tease. Instead of feeling we are back, we will still feel like we don’t know where we are. Instead of dancing, we will be distancing. Rather than see into each other’s hearts we will be staring at one another’s masks.”

With the holiday of Shavuot, a major Jewish festival that celebrates the giving of the Torah and is marked in many synagogues with all-night Torah study, next Friday, the opportunity to congregate in synagogues again may prove tempting.

Chabad of South Broward, located near Goldberg’s synagogue in Florida, distributed a registration form this week that asked potential attendees to commit to complying with strict health rules.

“Our community’s health and wellbeing is our top priority and therefore [we] are requiring these strict guidelines be followed with no exceptions in order for the Shul to im’H continue to open,” the survey said, using an abbreviation for the Hebrew words meaning “if it will be God’s will.”

After Trump spoke, the Centers for Disease Control released long-promised guidelines for on how houses of worship can reopen safely. The guidelines include suggestions that congregants wear masks, that houses of worship limit attendance and that communal singing be minimized.