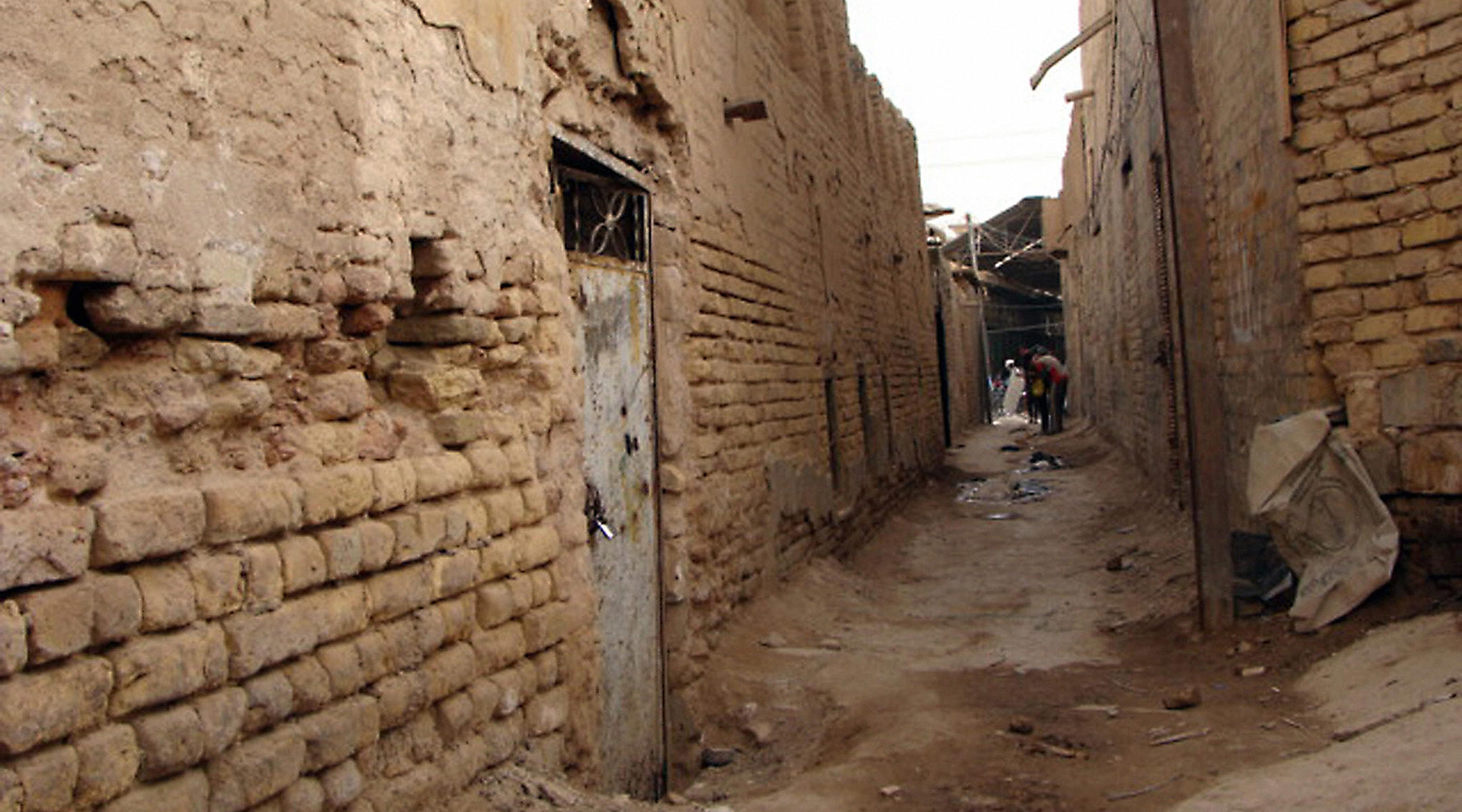 The entrance of an abandoned Jewish synagogue in Fallujah, west of Baghdad, Iraq, pictured in 2009. (Saddam Hussein/AFP via Getty Images)
Advertisement

(JTA) — Nearly half the Jewish sites in Syria and a quarter of the sites in Iraq have been destroyed, according to a research project.

In Iraq, at least 68 out of 297 Jewish heritage sites have deteriorated to the point that they are beyond repair, the London-based Jewish Cultural Heritage Initiative said in its report, published earlier this week.

In Syria, at least 32 out of 71 such sites have crossed the point of no return, the report said.

The structures date from the second half of the first millennium BCE up to the present day. Most sites were built in the 19th or 20th centuries.

The condition of many sites is not known despite efforts by the research team. In Iraq, there is uncertainty about two-thirds of the sites. Only 11% of the 297 Iraqi sites are still standing. Of those, most are in poor or very bad condition.

In Syria, the fate of only 8% of Jewish sites is unclear, but 45% of them have been destroyed. Those that remain have fared better than the Iraqi ones, with most kept in fair condition, according to the report.

Among the most endangered structures are the Bandara Synagogue in Aleppo, Syria, and the Synagogue of the Prophet Elijah in Damascus, the researchers found.

In Iraq, the bulk of the destruction happened during the second half of the 20th century as a result of neglect, reuse for different purposes — shops, auto repair, etc. — and destruction for redevelopment in the aftermath of the emigration of the Jewish community and the seizure of Jewish property, Michael Mail, the chief executive of the Foundation for Jewish Heritage, told the Jewish Telegraphic Agency.

“Jewish heritage in Mosul was affected by the battle to liberate the city from ISIS, but was already in advanced decay prior to the group’s seizure of the city in 2014,” he said.

Mail said the Shrine of the Prophet Ezekiel in al-Kifl is now the Shiite Al-Nukhailah mosque. Hebrew inscriptions and other traces of the Jewish nature of the shrine remain in the room that houses the tomb of Ezekiel, he said.

In Syria, the rate of deterioration and destruction has increased in the past few decades, “although violence and seizure of Jewish property happened earlier,” Mail added, including “heavy damage to the Bandara Synagogue in Aleppo during anti-Jewish riots in 1947.”

Synagogues there are in the best condition among Jewish heritage sites.

The Synagogue of the Prophet Elijah in Jobar, a suburb of Damascus, has been “largely destroyed” and the condition and location of its archive are unclear as a consequence of the Syrian civil war, Mail said.

Baghdad alone had more than 120,000 Jews before a series of pogroms and persecutions caused them to leave.