As his feud with Trump erupts, John Bolton goes from pro-Israel hero to ‘John who?’ 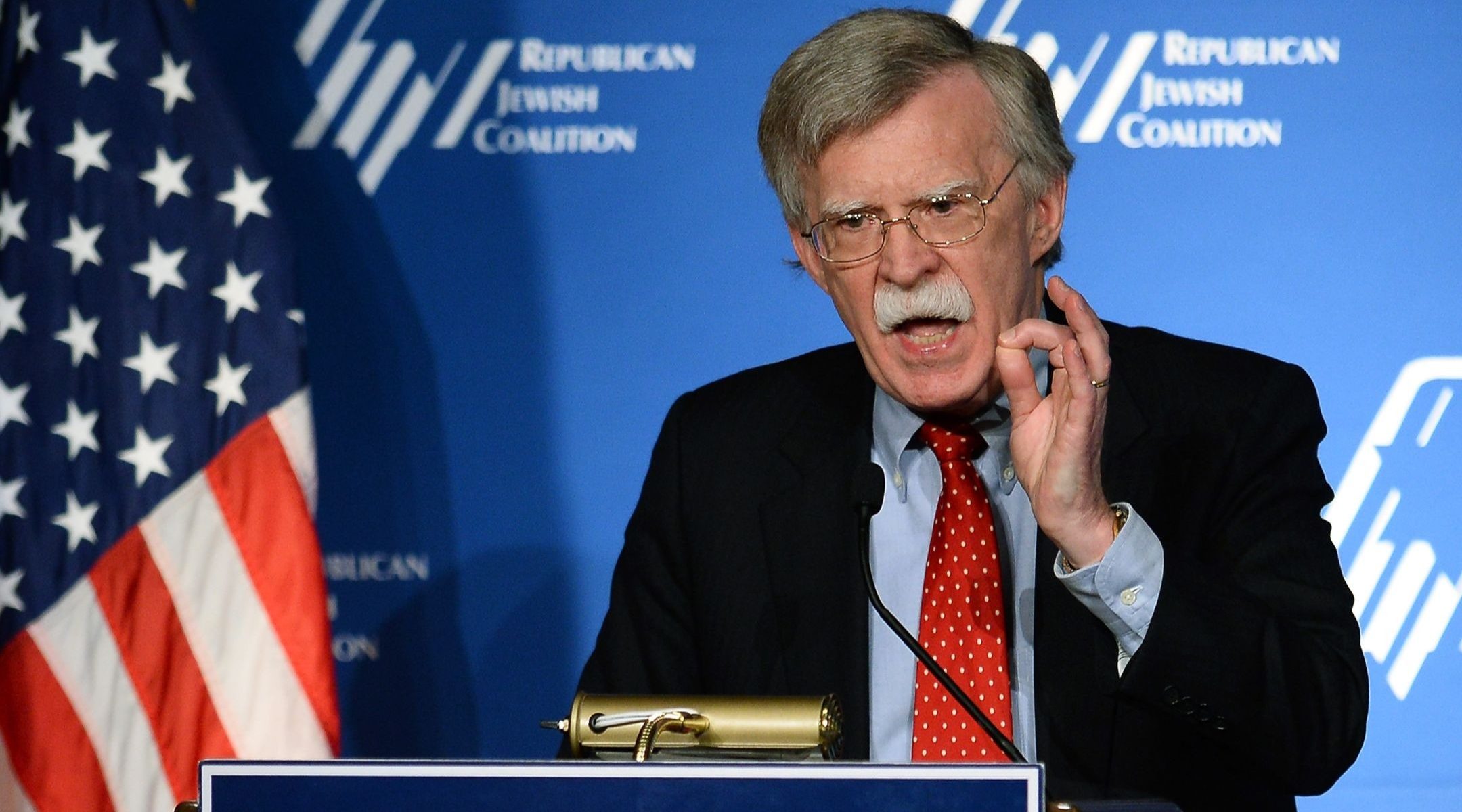 WASHINGTON (JTA) — In 2015, the Zionist Organization of America gave John Bolton a standing ovation when he said he wanted to be U.S. president. In 2018, the ZOA gave him its Defender of Israel Award.

This week, Bolton is about as far away from the presidency as he’s been in his life, and the ZOA doesn’t appear interested in defending him. Nor does the broader centrist and right-wing pro-Israel community, which lobbied for Bolton just 3 1/2 years ago to be secretary of state.

Bolton is dominating headlines this week with his new tell-all book, “The Room Where It Happened,” in which he depicts Trump as a know-nothing prone to placing his personal fortunes above the country’s and seeking political favors from Ukraine, China, and Turkey. In response, Trump is threatening his former national security adviser with criminal action for allegedly disseminating classified information (Bolton says the book was cleared by censors for publication; the White House disagrees).

The Trump-Bolton clash puts Jewish Republicans and right-wing pro-Israel groups in an especially tricky situation. They have long hailed Bolton as a voice of moral clarity willing to speak hard truths in defending Israel, often in the face of international consensus. But this time, Bolton is fixing his aim on a president whom many of his erstwhile pro-Israel allies view as the best friend Jerusalem has ever had in the White House.

The silence from Bolton’s one-time defenders in the centrist and right-wing pro-Israel communities is a stark contrast with previous times Bolton found himself in a fight. In 2006, an array of pro-Israel groups, which usually abjure endorsing or opposing presidential nominees, spoke on Bolton’s behalf when he was up for the U.N. ambassadorship and under fire from underlings for being a bad manager. More recently, after the initial Trump-Bolton break-up, Bolton was still receiving high praise from right-wing Jewish admirers.

What’s the difference between then and now? Here’s a rundown of why Bolton is out in the cold this time.

Why Jewish groups had a strong case of Bolton love

Bolton for decades has been a hero in pro-Israel circles for taking the lead, as the top official handling international organizations in the administration of George H. W. Bush, in getting the United Nations to rescind its hated 1975 Zionism is Racism resolution. Bolton, blunt to the point of crudeness in public, is an adept behind-the-scenes diplomat and leveraged U.S. influence in the immediate post-Soviet era to bring about the revocation in December 1991.

Bolton as U.N. ambassador in 2005-06 made defending Israel in the world body a primary mission. He nudged Russia and China toward acceptance of Iran sanctions, repeatedly citing the Holocaust denial of then-Iranian president Mahmoud Ahmadinejad to underscore the country’s threat to Israel. He helped broker an end in the latter year’s Israel-Hezbollah war on terms favorable to Israel.

Bolton was an interim ambassador; President George W. Bush lacked support in the Senate to name him to the job permanently. That led to unusual lobbying by an array of pro-Israel groups, which conventionally do not endorse presidential nominees. Among them were avatars of the American mainstream, including the Anti-Defamation League, the American Jewish Committee and AIPAC.

Bolton, lacking Senate support, was forced to leave on Dec. 31, 2006, but his pro-Israel profile never dimmed and he was a regular on the Jewish dinner speaker circuit. After Trump’s election in 2016, his Jewish organizational allies would be there for him again: In his book, Bolton thanks pro-Israel groups for lobbying for him to be secretary of state during the transition. The job went to Exxon executive Rex Tillerson, but in April 2018, Trump named Bolton national security adviser, reportedly on the counsel of Republican kingmakers and major pro-Israel philanthropists Sheldon and Miriam Adelson.

Bolton’s selection was cheered — especially among Jewish Republicans and foreign policy hawks. U.S. Rep. Lee Zeldin, a pro-Israel leader among House Republicans, tweeted that Bolton would be “great” and was “ridiculously knowledgable.”

Nowhere was the love for Bolton more intense than among members of the Zionist Organization of America. In 2015, Bolton was given a standing ovation when he told a ZOA gathering that he was considering a run for the presidency. In 2018, after he had joined the Trump administration, the group gave him its Dr. Miriam and Sheldon Adelson Defender of Israel Award.

When Trump fired Bolton in a tweet in September 2019 — Bolton says he actually had already resigned — even some of the president’s right-wing pro-Israel admirers refused to kick their longtime ally to the curb.

“I’m proud to say my friend Amb. John Bolton is an enormously principled man who would never relent on his beliefs,” Morton Klein, the ZOA president, told the Jewish News Syndicate in a statement the ZOA also tweeted.

Matt Brooks, the director of the Republican Jewish Coalition — another major Adelson beneficiary — thanked Bolton on Twitter for “your longstanding friendship, moral clarity and passionate defense of America and our allies, especially Israel.”

“Who?” was literally one of the replies given to the Jewish Telegraphic Agency this week from pro-Israel groups that once had praised Bolton when it canvassed the organizations for comments on his current isolation.

ZOA and the Republican Jewish Coalition were among the groups that declined or did not reply to the JTA request. Others included AIPAC, the American Jewish Committee, B’nai B’rith International and the Jewish Institute for National Security of America. Zeldin and the Adelsons also did not reply.

Klein, the ZOA president whose group was addicted to Bolton and who isn’t shy away about speaking out, did not reply to three requests for comment.

A factor in Klein’s reticence might be ZOA’s prominent placement in a video posted on Twitter by White House aide Dan Scavino featuring multiple occasions when Bolton praised the president. The video starts with Bolton’s 2018 ZOA appearance, with the organization’s logo prominently splashed behind him.

“There is nothing worse than a disgruntled, arrogant, egotistical, and all around miserable warmonger who gets fired from their job, and goes to write a book with classified information — while being paid millions of dollars for it,” Scavino said. “Someone changed their tune, once he was FIRED!”

Why is Bolton on his own this time?

Abraham Foxman, the retired national director of the Anti-Defamation League, who defended Bolton in 2006, said in an interview that the big difference this time is that Bolton’s troubles have nothing to do with Israel or Iran.

“There is nothing the Jewish community needs to defend him on at this moment,” Foxman said.

The 2006 debate was ostensibly over Bolton’s management style, but his critics notably were in favor as well of greater rapprochement with Iran and also were likelier to be critical of Israel. Foxman said that’s not the case here.

“In the past when he was criticized on Israel and Iran, there was an interest in the Jewish community to defend him because of the issues,” the former ADL chief said.

While Bolton calls Trump corrupt and seethes at the president for mishandling Iran and the Middle East, he and the president are essentially on the same page policywise: isolating Iran and forging close ties with Israeli Prime Minister Benjamin Netanyahu’s government.

That put Bolton in a “weird space” both broadly and in the pro-Israel sphere, said a senior pro-Israel official who asked not to be identified.

Additionally, this official said, Bolton in 2006 had the backing of the White House. Referring to Bolton’s current woes, the source said, “He started a war with the world’s most powerful guy.”

Another pro-Israel official said it was notable that Bolton in his book did not name the pro-Israel groups he thanked for lobbying for him to be secretary of state.

“I don’t think Bolton wants or needs anyone to come to his defense,” this official said. “He knows what he is getting into, he’s not interested in drawing anyone into his fight. His reputation is as a tough person, he thinks he can hold his own.”

Bill Kristol, a prominent pro-Israel Republican who loathes Trump, is among a handful of voices saying it may be worthwhile for the anti-Trumpers to forge an alliance with Bolton, whose book, alleging shocking abuses of power, will be fodder in the 2020 elections.

“To my liberal friends: Disagree with Bolton, chastise him for staying quiet in impeachment, disdain his lack of introspection,” Kristol said on Twitter. “Don’t invite him to parties! But he saw Trump up close for 17 months, and he has told the truth about him. (And you go to war with the allies you have.)”

Mark Levin, a Jewish conservative radio talk show host, said on Twitter that Bolton’s betrayal of Trump placed a one-time ally to conservatives beyond the pale.

“Appalling. John Bolton campaigned for the National Security Adviser post, knowing in several respects his views were contrary to the president’s,” Levin said. “In my wildest dreams, I never thought Bolton would fail to properly serve the president, let alone write a tell-all book … as disloyal and damaging as a tell-all book is, you couldn’t even wait until after the election.”