‘A matter of life or death’: Jewish groups sound alarm on protecting the right to vote by mail 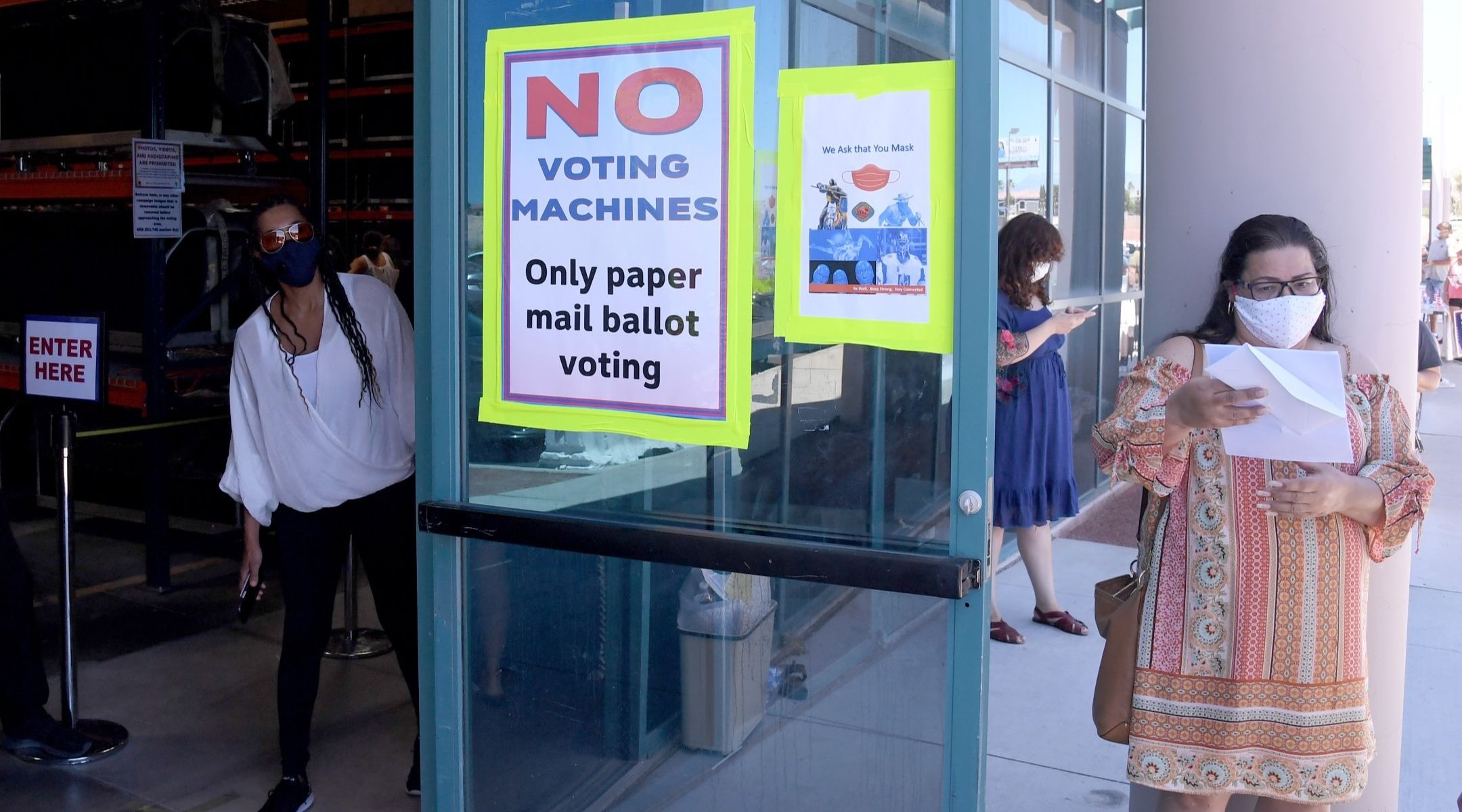 WASHINGTON (JTA) — Rep. Jamie Raskin’s warning to top Jewish Democratic leaders was stark: The war that President Donald Trump and Republicans have declared on the U.S. Post Office is a threat to American democracy.

“There’s a war on vote by mail, which we call voting from home, and a war on the Post Office,” said the Maryland Democrat, who’s also a constitutional scholar.

“The right wing has been at war with the Post Office for a long time, but especially now,” Raskin added, speaking at an event organized by the Jewish Democratic Council of America. “Because they think that if they can take over the Post Office … they will be able to prevent real balloting and real voting in 2020.”

Raskin is far from alone in calling attention to voting access. Many Jewish groups — political and religious — have aligned on the issue this year and are lobbying for widespread mail-in voting. The Anti-Defamation League and the Jewish Council for Public Affairs told Senate leaders this week that they believe the issue is “a matter of life or death.”

They are butting up against the Trump administration, which is seeking to block funding for the Postal Service, and the president himself, who frequently makes claims, without evidence, that mail-in votes are susceptible to fraud. Meanwhile, the federal commission that oversees elections has decreased its oversight, raising concerns that November’s vote could be plagued by a constellation of challenges.

Here’s a look at what Jewish groups are doing to make sure voting is easy this year.

The ADL and the Jewish Council for Public Affairs, the Jewish public policy umbrella, have mobilized 149 Jewish groups to press Congress to approve $3.6 billion for funding to make mail-in voting easier.

The funding is baked into the Heroes Act, the most recent pandemic funding bill passed in the Democratic-led U.S. House of Representatives. Passed in May, the measure is awaiting action in the Republican-led Senate. Republicans are resistant to advancing the voting rights section because it would override state requirements for voter identification.

In a letter sent this week to Senate leaders, the two groups and their allies cast the funding as a matter of “life and death” during the pandemic.

“Unless you provide emergency election assistance and policy provisions, the decision our communities and so many voters are likely to face about whether or not to wait in crowded lines and rooms to vote may literally be a matter of life or death,” the letter says. “This is especially true for members of marginalized communities most likely to contract and die from the virus.”

The letter follows earlier acts of advocacy for mail-in voting. In May, Missouri rabbis cited the Torah and rabbinical teachings as they encouraged Jews to take advantage of a religious exemption clause in the state’s voting rules to cast ballots by mail. Missouri’s governor is among the Republican state leaders opposed to expanding mail-in voting during the pandemic.

“At this unprecedented time in modern history, the Rabbinical Assembly supports the unencumbered right to participate in local and federal elections with vote-by-mail, online, over the Internet, and absentee ballots with no requirement to provide a reason nor so-called valid excuse,” the group said in a statement at the time.

The mechanics of voting, at least pending the passage of the Heroes Act, is a matter for the states, and Jewish groups have been working their legislatures to facilitate voting.

Ohio Jewish Communities, that state’s umbrella for Jewish public policy groups, and the state chapter of the National Council of Jewish Women have asked for changes to an elections preparedness bill in the Republican-led legislature. The groups say the bill includes obstacles to mail-in voting, for instance requiring voters to pay for postage and a 10-day cutoff before Election Day.

“Think of someone who goes into the hospital for an emergency operation five days before the vote who generally votes in person,” Susan Reis, the state policy advocate for NCJW, said in testimony submitted this week.

Steve Freeman, the ADL’s vice president of civil rights, said state chapters also would work on making it easier to vote in person, recalling the long lines for the Wisconsin state Supreme Court election in April that resulted in dozens of coronavirus infections. A focus would be on ensuring that there are multiple venues open for in-person voting.

“People vote in schools, and it’s not clear that public schools are going to be open” because of the pandemic, Freeman said. “How do you address those kinds of challenges?”

Jewish groups in Florida helped lead advocacy in 2018 for an amendment that would restore the vote to most people who had been released from prison after being convicted of felonies. Republicans in the state subsequently passed a bill that required those convicted of felonies to pay outstanding costs to get the vote, and a number of civil liberties groups have asked the courts to intervene, saying the requirement amounts to a poll tax.

Most of the estimated 1.4 million felons whose right to vote would be restored are people of color who likely would vote Democratic. The U.S. Supreme Court declined to step in last week, but an appeals court is still considering the lawsuits.

The National Council of Jewish Women has joined efforts to educate formerly incarcerated voters in Florida about their voting rights. A number have expressed fears that if they vote and then find out that they were not eligible, they could face legal consequences.

“A lot of our advocates on the ground are doing the education work to try to make sure everybody knows what their rights are,” Sheila Katz, the group’s CEO, said in an interview.

Turning out the vote

Rabbi Jonah Pesner, who directs the Reform movement’s Religious Action Center, knows that Jews outvote other Americans. In the presidential election of 2016, 56% of eligible Americans voted, and Pesner says the turnout among Jewish voters is believed to be as much as over 70%.

But it’s not good enough, he said.

Zoe Terner, a University of Florida student who is an activist with the Religious Action Center, said alumni of Reform youth movements were training Jewish college students to inform their peers of their rights at a time when it is not clear whether university students will be staying at home or returning to their campuses in time for the election.

“There’s a really big emphasis placed on where are you voting because maybe it’s different from where you thought you would be this time last year a couple of months ago, making sure you know the dates and deadlines,” Terner said.

Leveraging family relationships is not an unfamiliar Jewish concept. NCJW’s chapter in Michigan has launched a “Let’s Both Vote” program that Katz says gets members “to reach out to their children, grandchildren, children, nieces, nephews or parents, mothers, the other way around, and commit to voting with another family member.”

Jewish groups are not just trying to turn out Jewish voters. The Religious Action Center has joined with the Center for Common Ground, an organization that gets out the vote for underserved communities, in online training, staffing get-out-the-vote phone banks, texting and postcard writing — a pre-digital outreach method that is still the next way to reach minorities, Pesner said.

The Center for Common Ground ran a study, Pesner said, “that showed that a lot of low-income voters or communities of color respond to personalized postcards. So we also have a postcard campaign — already we’ve sent out tens of thousands of postcards that are personalized to individuals.”

Meredith Jacobs, the president of Jewish Women International, was appalled in 2018 to get a question from her elderly parents, who live in the Philadelphia area: Was it true that one could text one’s vote? This year, she said, her organization was “working with young women to push back against disinformation campaigns on social media designed to depress the vote.”

“Our supporters are mostly women of privilege and access, and we’re letting them know this isn’t the case for everyone and making sure they know why it’s important they use their voice,” she said.

Jacobs said her group was preparing to repel the expected onslaught of online misogynist messaging once Joe Biden, the Democratic nominee, names a running mate. Biden has said he will name a woman.

“We’re on the lookout against that and pushing back against that because that’s designed to depress the vote,” she said.

The ADL’s Freeman said his organization was also monitoring extremist disinformation online. The ADL will be “speaking out against appeals to bigotry and racism,” he said, and will be conducting “targeted reporting on extremist efforts to engage.”