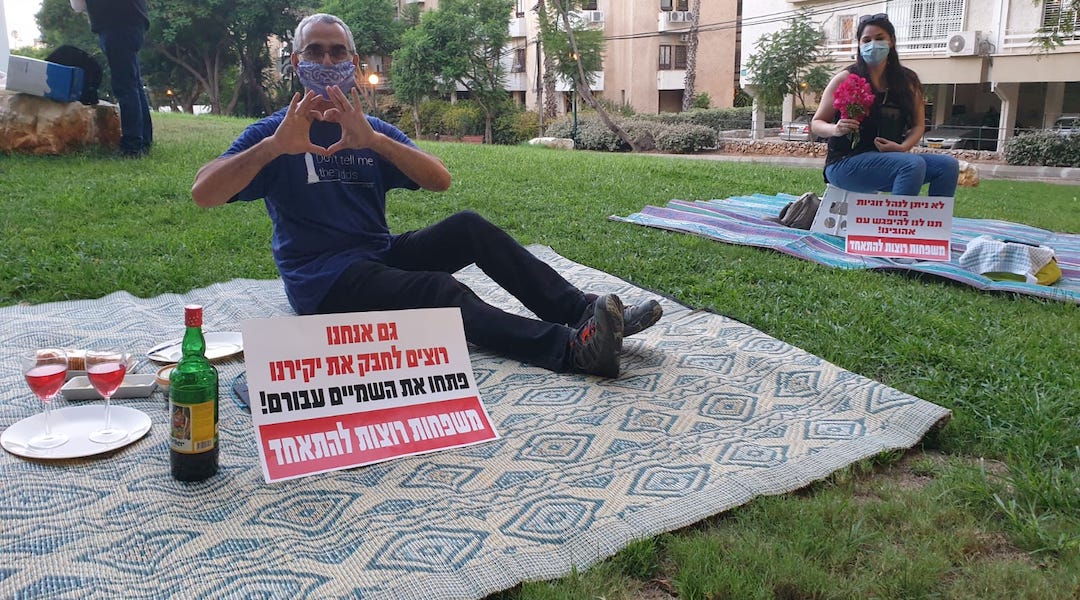 Israelis protest being separated from their significant others outside the residence of the foreign minister by having solo romantic picnics on the eve of Tu B'Av, the Jewish day celebrating love. The signs read, "We also want to embrace our loved ones. Open the skies for them. Families want to be together." (Courtesy of Plia Kettner)
Advertisement

(JTA) — It has been four months and counting since Yaara Mizrachi has seen her one-year-old son.

Mizrachi and her partner have been together for seven years. But because same-sex marriage is illegal in Israel, and was illegal until 2017 in Germany, the two never made their committed relationship legally official. Her partner, who does not wish to be named in the press, lived in Berlin, Mizrachi lived near the port city of Haifa, and they would visit each other often.

At the end of 2017, they decided to have a child and build a life in the same place. Once the baby was born, they planned to spend six months in Germany and six months in Israel, then decide where to live.

It was during the stint in Israel that the coronavirus spread across the globe. On March 13, Mizrachi’s partner flew back to Berlin to be near her aging parents. Because she was the one who gave birth to their son, and he thus did not have Israeli citizenship, she took the baby along.

Five days later, Israel shut its borders to foreigners. Because Mizrachi and her partner weren’t legally married, there has been no way for them to reunite as a family. So, since March, Mizrachi has watched her son grow via videochat, 2,400 miles away.

“I always ask, does he remember me? Does he recognize me?” Mizrachi said. “We were co-parents and now it’s a situation where she’s raising him alone, and my ability to make decisions is minimized. So my parenting has been minimized to watching him develop and crawl and start to walk and grow teeth and wave goodbye. It’s something that I’m not connected to. I can’t tell you how much it breaks my heart.”

Family separations like Mizrachi’s have become another effect of the coronavirus pandemic in Israel, where the country’s Orthodox Chief Rabbinate controls all legal Jewish marriage. That means all recognized marriages need to take place under Orthodox Jewish law, which forbids interfaith and same-sex marriage. So increasing numbers of secular, LGBTQ and interfaith couples instead opt to marry elsewhere and then, eventually, file the paperwork necessary to certify the marriage in Israel. Others, like Mizrachi and her partner, don’t get married at all.

Activists have lobbied against Israel’s marriage laws for years, but day-to-day, couples have found workarounds and taken their time with the bureaucracy. The ease of travel between Europe and Israel also meant that couples who lived in both places could come and go as they pleased.

That all ended on March 18, when Israel shut its borders. Now, couples that hadn’t done the right paperwork, even those who are legally married somewhere else, find themselves in two different countries with no way to reunite.

“It’s really a scandal,” said Gabi Lasky, an Israeli human rights attorney who is preparing to file a suit in the coming days on behalf of the separated families in Israel’s Supreme Court. “We have the right to family, the right to not be discriminated against. This is a disproportionate response that’s without basis and not topical, because there’s no legal reasoning that justifies discriminating against unmarried or same-sex couples.”

In one instance, a three-year-old Israeli girl was taken with her Ukrainian grandmother for a short visit to Ukraine — and then prohibited from returning to Israel for six months because, at first, there weren’t flights, and then because her grandmother wasn’t an Israeli citizen and was thus prohibited from boarding a plane destined for Israel, Reuters reported. Eventually, the toddler got home with the help of a special escort.

In June, Israel released guidelines paving the way toward family reunification — for people with recognized marriages in Israel. In July, it updated those guidelines to include married couples where one of the spouses is not an Israeli citizen, but those guidelines still mandate that the non-Israeli needed to have been in Israel for at least 90 days in 2019.

On Tuesday, updated guidelines stated that foreigners who had submitted an application to register their relationship in Israel could enter the country, pending approval of the Interior Ministry. For Israelis like Mizrachi, whose relationships aren’t officially recognized in any way, it doesn’t help at all.

The guidelines also let a variety of other foreigners into the country, including medical tourists, grandparents of people getting married, people studying in Israeli religious academies and more.

Sabine Haddad, a spokesperson for Israel’s Population and Immigration Authority, a division of the Interior Ministry, told the Jewish Telegraphic Agency that the couples protesting Israel’s guidelines are only those who have no actual proof that they’re together.

“The Population Authority gives permits to hundreds of couples to enter,” she wrote in response to a JTA inquiry. “You’re talking about couples where no one knows they’re a couple except them and the press. Because according to the current rules, every registered couple receives a permit.” 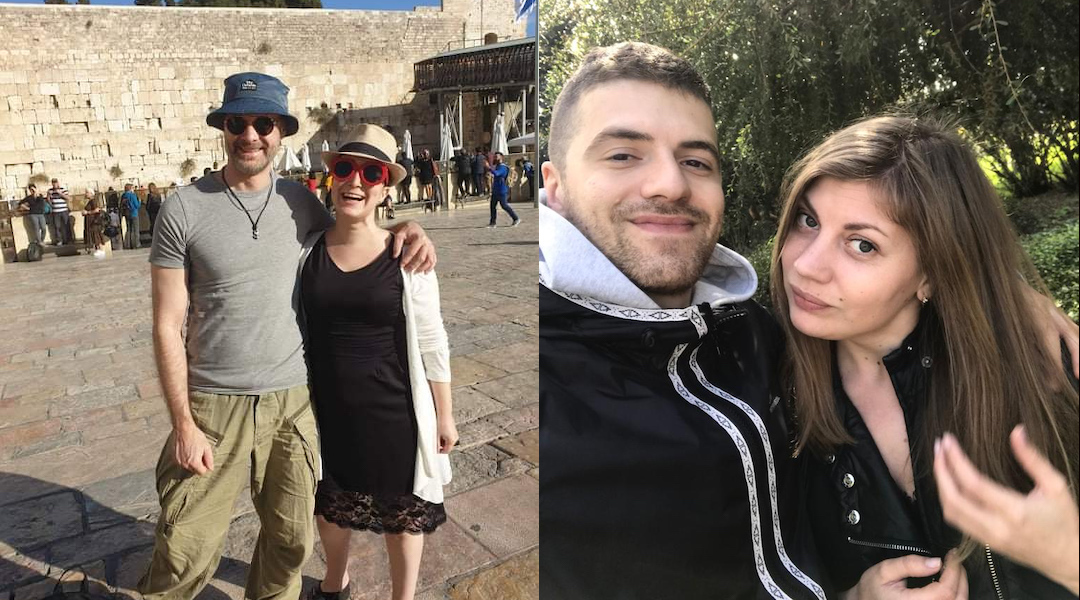 Left: Plia Kettner and her partner, Erik, at the Western Wall in Jerusalem. (Courtesy of Kettner) Right: Andrey and Polinka Belikov, who got married in October. (Courtesy of Andrey Belikov)

But even married couples that have tried to register their marriages in Israel have found themselves stymied and separated. Andrey and Polinka Belikov got married in Cyprus in October because Polinka is not Jewish, making it impossible for them to get married by Israel’s Chief Rabbinate.

Andrey is an Israeli citizen and Polinka is not. In January, she was living in Ukraine and preparing to move to Israel. In January, Andrey went there to gather the documents necessary to register their marriage with Israel’s Interior Ministry. In February, Polinka received a visa to live in Israel. She bought a plane ticket for March 21, after which they planned to register the marriage.

On March 17, she quit her job in anticipation of the move. The next day, Israel closed its borders.

The Belikovs are hopeful that Tuesday’s change in the regulations will allow Polinka to enter the country.

“It’s really hard, every day, to just see your wife on a phone screen,” Andrey said. “We just got married and wanted to build a new family. But instead of that, in the hardest era for humanity, we’ve been separated and prohibited from seeing each other.”

No one knows exactly how many families have been separated by the regulations, but a Facebook group for those affected has more than 1,500 members. On Tuesday evening, Israelis who are separated from their foreign partners set up socially-distanced picnic blankets in a field opposite the residence of Israel’s foreign minister. The event, which took place on the eve of Tu B’Av, a Jewish holiday celebrating romance, was meant to show that the protesters could not celebrate their relationships like other Israelis.

A hearing in the Israeli Knesset on separated families, convened in early July at the initiative of the Facebook group’s creator, Plia Kettner, revealed that the issue affected far more Israelis than the young, urban secular people who eschew Orthodox marriage.

At the hearing, left-wing legislator Tamar Zandberg called the separations a “a vexing and troublesome issue” and a human rights violation. But the separations were also decried by Israel Eichler, a haredi, or ultra-Orthodox, lawmaker, who spoke of non-Israeli spouses and children of his constituents who had trouble entering the country. Osama Saadi, an Arab-Israeli lawmaker, said his office was “flooded with inquiries” regarding the separations. He also raised the issue of families who are split between Israel and the West Bank, who have found it even harder to reunite during the pandemic.

“I can’t remember another hearing where we had everyone around the table, and everyone was in favor of the same idea,” said Yifat Shasha-Biton, a lawmaker from the right-wing Likud Party who chaired the session.

But the affected couples say that the Ministry of the Interior still needs to do more to address their situation. They’re calling for an ad-hoc committee to examine their requests on a case-by-case basis. If the ministry doesn’t do that, they’re pinning their hopes on a favorable decision in Israel’s Supreme Court. If activists decide to file suit with the Supreme Court, says Plia Kettner, who created the Facebook group and spoke at the Knesset hearing, that too would be a painful decision.

If Israel doesn’t change its regulations soon, couples that are able may choose to make their lives elsewhere, Kettner said. Mizrachi is trying to see whether she and her partner can meet up in London and get into Berlin from there. Belikov may move to Ukraine, but that would mean giving up work as a house painter in Israel.

Others simply don’t want to leave their home country. Kettner’s boyfriend Erik, for example, lives in Sweden. While it may be possible for Kettner to move there to be with him, she’s reluctant to, as she’s a local elected official in the central Israeli city of Kfar Saba. All she wants, she said, is for her partner to be able to be with her in Israel.

“Sometimes people approach this as, ‘Oh, all it is is that he can’t see his boyfriend,'” Kettner said. “But to not see the person who is your support system — that has health implications. They’re trying to protect us from the coronavirus, but they’re giving us other illnesses.”