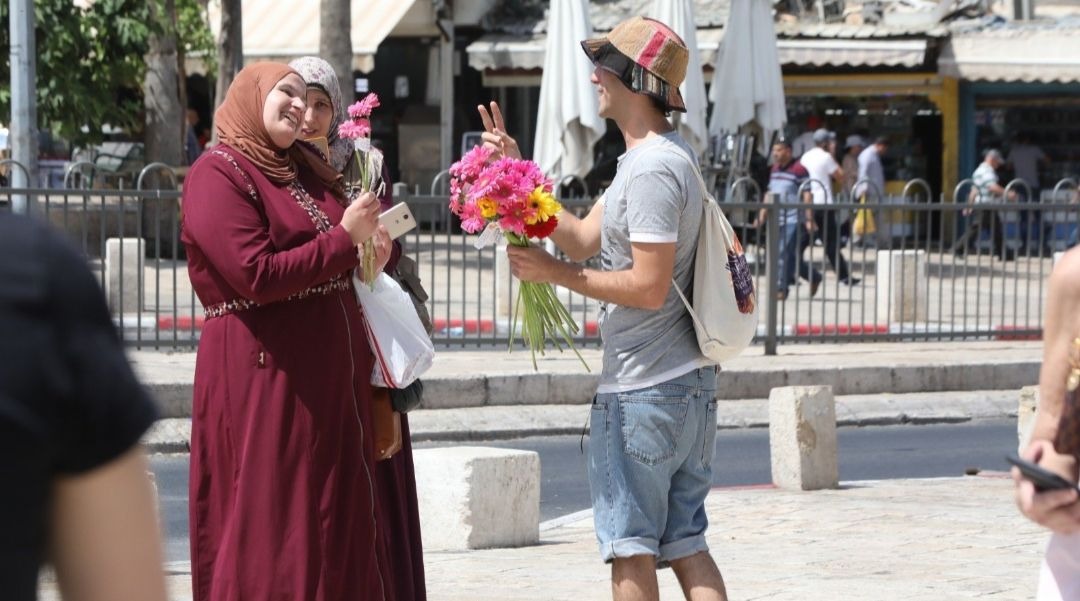 An activist with Tag Meir, an Israeli group funded by the New Israel Fund, hands out flowers on a day to counter racism in Jerusalem on June 1, 2019. (NIF/Yossi Zamir)
Advertisement

WASHINGTON (JTA) — A pro-Israel activist has filed a lawsuit that, if successful, could severely restrict freedom of speech for non-governmental organizations.

David Abrams’ lawsuit alleges that the nonprofit New Israel Fund “electioneered” in violation of its tax-exempt status by supporting grantees in Israel who are vocal on political issues. Among other things, the lawsuit cites the NIF for supporting Israeli organizations that have sought to have candidates barred from running from office for being racist, for calling candidates racist and for praising candidates who embrace their initiatives.

The suit, filed on behalf of an organization Abrams leads, The Zionist Advocacy Center, seeks $110 million in damages from NIF which, under New York state law, Abrams would be entitled to as much as 30 percent of as a whistleblower. The NIF must file its objections by Friday.

Critics say the NIF activities Abrams is targeting are routine for many nonprofits, Jewish and otherwise, and that if he is successful it would impede the efforts of those groups to work on behalf of political issues they care about.

Abrams could “undermine a lot of the work that nonprofits do both in the United States and around the globe to promote the value of constitutional democracy,” said Brian Hauss, a staff attorney with the American Civil Liberties Union, which joined the case in June.

Abrams has long sought to use legal means to restrict the activities of anti-Israel groups. As a registered foreign agent with an Israeli legal outfit that has ties to the Israeli government, he has largely focused in the past on organizations he sees as acting against Israel’s interests.

But this time he is turning his guns on a group that sees itself as pro-Israel, by employing a weapon that, if unleashed, could cripple the sort of issues-based activism that is the bread and butter of scores of American Jewish nonprofits.

Marc Stern, the general counsel for the American Jewish Committee, said that if Abrams wins it would unleash internecine warfare among Jewish organizations already polarized by the Trump presidency.

“It’s basically a good thing for the Jewish community that people can’t challenge the tax-exempt status of others because it would lead to guerrilla warfare against your ideological opponent,” Stern said.

In an email exchange, Abrams said that it was up to the government to decide whether he was going too far with his filings, known as qui tam, an abbreviation of a Latin phrase which refers to private citizens who initiate or assist a prosecution.

“The government has wisely included checks and limitations on these types of lawsuits,” he said. “Among them, the government retains an unfettered right to settle or even dismiss qui tam lawsuits despite the objection of the private citizen who filed the lawsuit. This has happened to me on numerous occasions and will assuredly happen again in the future.”

Abrams is at the vanguard of a right-wing pro-Israel movement that has successfully used the courts and laws to inhibit advocacy on behalf of causes it sees as threatening to Israel.

In 2018, he compelled Norwegian Peoples Aid to pay a $2 million settlement because it chose not to challenge Abrams’ claim: money it spent on democracy training in the Gaza Strip and mine clearing in Iran was tainted by associations with banned terrorist groups.The organization had accepted U.S. State Department money for separate projects, unrelated to the Gaza or Iran projects. A separate Abrams action succeeded in forcing the home rental website AirBnB to unblock listings in West Bank Jewish settlements.

Some of Abrams’ challenges have been dismissed, like his complaint that The Carter Center (President Jimmy Carter’s nonprofit) was supporting terrorists because it provided “physical assets of fruit, cookies, bottled water, and presumably other food and drink” at a conflict resolution workshop that included representatives of Hamas and the Popular Front for the Liberation of Palestine, both U.S.-designated terrorist groups.

With his NIF action, Abrams is bringing this fight within the Jewish community, targeting an organization that has attracted liberal Jewish American donors for its support of pro-democracy movements in Israel and which has become a bugbear for Prime Minister Benjamin Netanyahu and his allies, who accuse its grantees of interfering in Israel’s internal affairs.

Daniel Sokatch, NIF’s CEO, linked Abrams directly to efforts by the Netanyahu government to silence its critics, citing Abrams’ work on behalf of the International Legal Forum, an Israeli-government founded organization that combats the boycott, divestment and sanctions movement.

“David Abrams is a practitioner of what they call lawfare, which are bullying and inappropriate lawsuits that are meant to chill freedom of expression, essentially terrorize nonprofit organizations into silence or settlement, when they disagree with his extreme hardline vision of what Israel is and should be,” Sokatch said in an interview.

In his complaint, Abrams cites the NIF for actions that are commonplace among nonprofits. For example, he accuses NIF grantees of using the courts to lift a ban on some candidates or to ban others from running, but Jewish nonprofits have also sought to limit the electoral prospects of politicians and the ACLU itself has represented candidates seeking to be included on ballots.

Abrams cites an NIF grantee for listing candidates who support its pledge to protect trees, but nonprofits routinely single politicians out for praise who embrace their initiatives. And he says calling a candidate a “racist” or a “fascist” amounts to electioneering, but that too is commonplace among U.S. nonprofits.

“American Jewish groups do not hesitate to call out candidates who engage in anti-Semitic or racist speech,” the AJC’s Stern said. “That’s pretty much across the spectrum.”

In an email, Abrams maintained that it was rare for tax-exempt nonprofits to engage in electioneering, though he acknowledged the line isn’t always clear.

“The line between what is and is not electioneering can be fuzzy at times; and it appears to me that the New Israel Fund has clearly crossed that line,” he wrote.

Abrams’ hoped-for $110 million penalty is unlikely. Typically, successful qui tam lawsuits result in penalties in the low seven figures. In any case, Hauss says that while he does not believe that Abrams’ case has a chance of succeeding, damage will still be done if Judge Gregory Woods of the U.S. District Court for the Southern District of New York does not dismiss the case outright and allows costly pre-trial phases to go-ahead.

“Discovery is very costly to litigate, it’s very basic to an organization’s privacy,” he said, referring to the stage where litigants exchange information that might be pertinent at trial. “The lawsuit itself is dangerous because I think it’s clearly designed to harass the New Israel Fund for its protected views.”

For his part, Abrams, who runs a separate law practice, said he is dedicated to his cause because he is a “passionate Zionist.”

“I would appreciate it if you would mention that I am strictly an amateur, i.e. nobody — domestic or foreign — provides any financial support for what I do,” he said in an email.