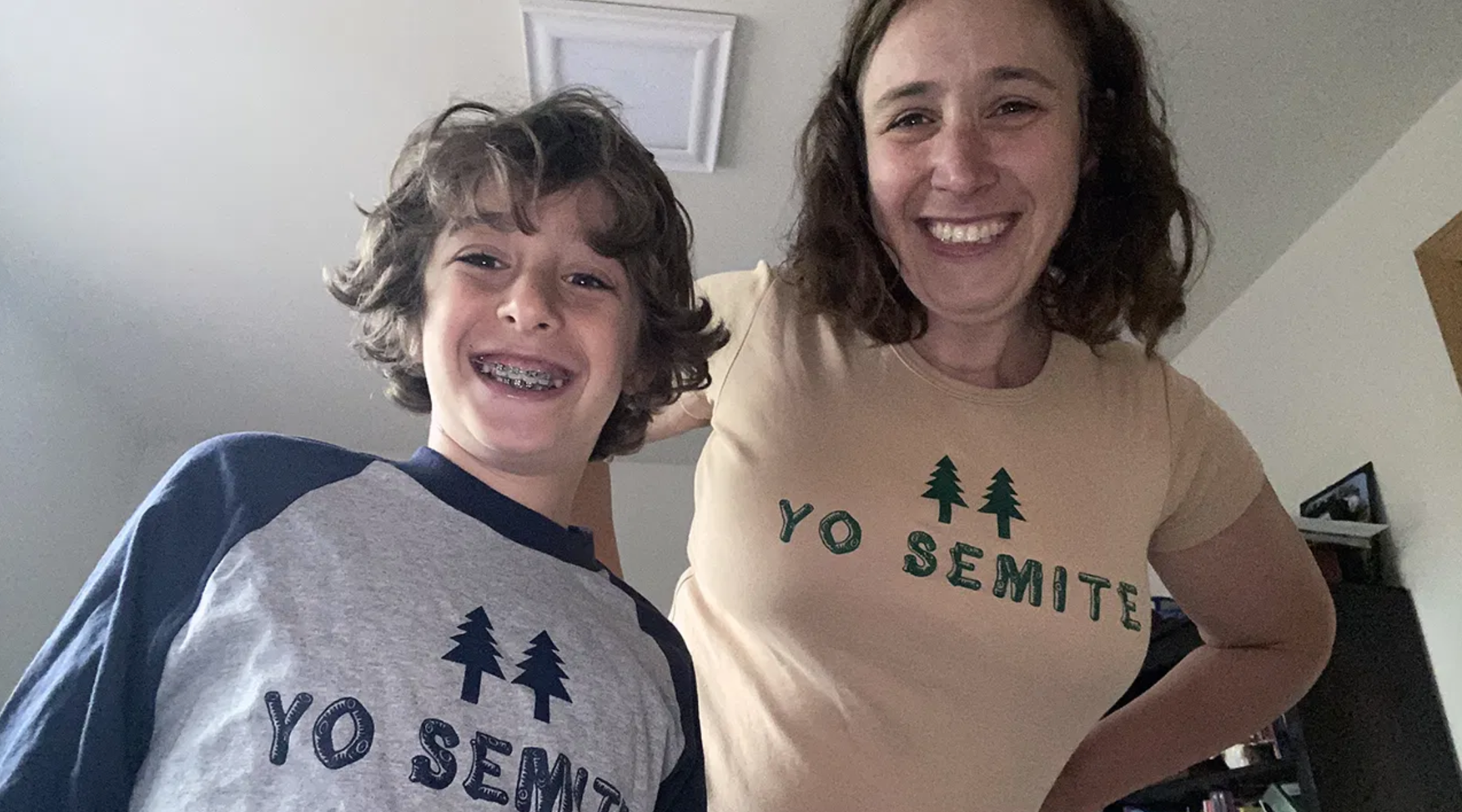 Sarah Lefton, creator of the "Yo Semite" T-shirt, with her son, Levi. (Courtesy of Lefton)
Advertisement

(J. the Jewish News of Northern California via JTA) — When Berkeley resident Sarah Lefton awoke on Tuesday morning, her phone was lit up with notifications.

While she was sleeping, President Trump had signed the Great American Outdoors Act, a piece of legislation that will protect the nation’s parks and finance the Land and Water Conservation Fund.

What prompted the calls, however, was that Trump had mispronounced the name of one of America’s most famous parks, calling it “Yo Semites” and thus invoking, albeit unwittingly, a T-shirt Lefton had created in 2004.

“I went to Twitter and there were hundreds of notifications,” she said. It didn’t take long to discover that Lefton’s friend, Rabbi Danya Ruttenberg, had given a shoutout to her more than 114,000 followers.

“Brilliant,” Lefton tweeted in response. “You can still get them from Afikomen in Berkeley and the National Museum of American Jewish History in Philadelphia! I was there first, Trump.”

Lefton, a Jewish educator and media consultant, immediately put in an order for hundreds of T-shirts with her Bay Area printing company, to be shipped to retailers near and far who expected a sudden swell of orders after the presidential mispronunciation.

Just did a drive-by and confirmed that YO SEMITE shirts are in stock at my favorite local Judaica store! https://t.co/sEIksxivhP #BERKELEY #YoSemites #jewish pic.twitter.com/WBwM5n5TrZ

Kristen Kreider, director of retail and visitor experience at the Jewish museum in Philadelphia, said in an interview that while 15 shirts might be sold in a typical month, there were already 54 orders by Tuesday afternoon. As of midday Wednesday, that number had grown to 500 orders.

Chaim Mahgel, co-owner of Afikomen Judaica in Berkeley, is also seeing an uptick. For the past several years, the T-shirt was “usually displayed” in the store window.

“It’s a great draw for people who are walking and driving past,” he said.

Afikomen sold 20 of the shirts last year, alongside other Judaica items and novelties. This week there already has been an increase in phone and online orders, some of them “before we knew what was going on,” said Mahgel. The store has now placed the shirt prominently on its website and Facebook page, “so we are able to ride the wave.”

Lefton came up with the T-shirt idea during her years at Camp Tawonga, the Jewish summer camp in Yosemite Valley where she was first a camper and then marketing director from 2001 to 2005. She was inspired, she said, by visitors’ unintentional mispronunciations of the park’s name.

One day she said the name out loud and realized it could be separated into two words and given a more Jewish context. She created one shirt for herself using her home screenprinter, and was wearing it one day walking in her San Francisco neighborhood.

“It must have been Saturday, because I ran into these two Jews in kippahs who were like, ‘Girl, where did you get that [T-shirt]? That is awesome!’ And I said, ‘Oh, I made it.’ And they were like, ‘Oh my God, make us one.’” (The three later became friends, she notes.)

Lefton wondered if other people would actually buy them, so she put in a minimum order of 12. She created a basic website — JewishFashionConspiracy.com — with just the one product featured, fed some friends pizza in exchange for stuffing envelopes, and the business was born.

Camp Tawonga remained a part of the “Yo Semite” story, as Lefton stored the T-shirts “in huge boxes under my desk, thanks to the loving indulgence of my supervisors.” After the shirt caught on, Lefton also designed camp merchandise, including bumper stickers that say “I’d rather be at Camp Tawonga.” And Jewish Fashion Conspiracy went on to sell additional items, including boxer shorts and underwear reading “a great miracle happened here” and additional T-shirts with tongue-in-cheek phrases like “Jews for Jeter,” “Geltdigger” and “Red Sea Moving Company.”

The “Yo Semite” shirts pop up every now and again, even when they don’t get an inadvertent mention from the presidential podium. “One time I was walking around the Metropolitan Museum of Art and I saw a guy wearing a ‘Yo Semite’ T-shirt and I was so excited to approach him!” Lefton said. “We took a photo together, of course. And friends routinely text me photos of themselves in Yosemite Valley wearing their T-shirts.”

Lefton’s next venture was G-dcast.com, which after two years in development launched a full year’s worth of Torah portion-oriented animated videos. The G-dcast team then moved on to prophets, megillahs and Psalms, and created Jewish content for children as well as young adults. The site was renamed BimBam in 2016 and officially closed in 2019, although the catalog is still accessible at ReformJudaism.org.

Post-BimBam, Lefton continues to do independent animation production. She has resurrected the JewishFashionConspiracy.com website a few times in the past, and thought she might do it again now. “But in this pandemic moment, I just can’t,” she said. “I don’t have the koach (strength) to stuff envelopes and deal with the post office… also thank you Mr. President.”

She can also thank the president for saving her from a life of TV reality show fame; in early Jewish Fashion Conspiracy days, she had applied to be a contestant on Trump’s NBC show “The Apprentice.” After making it through the second round of auditions, she was cut.