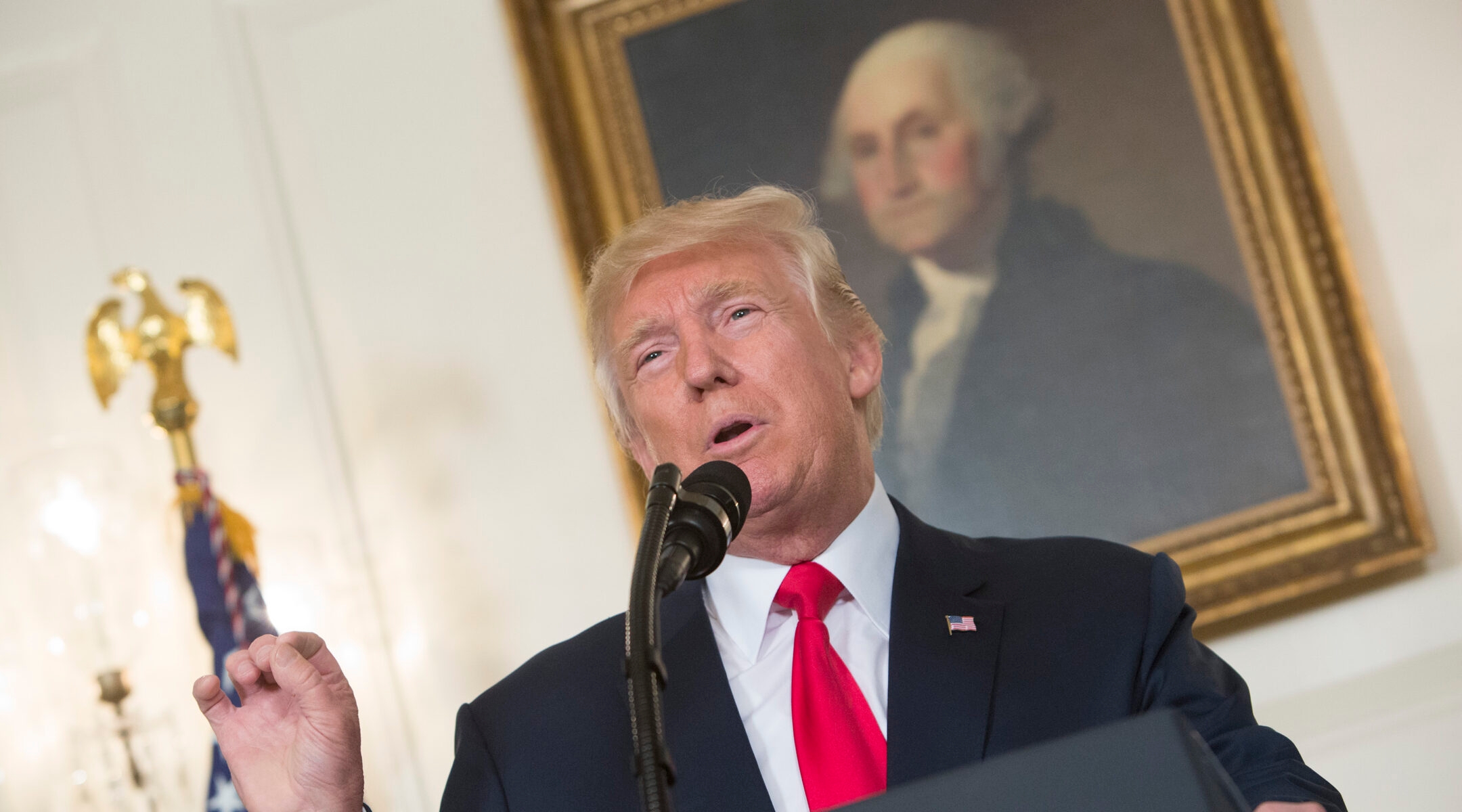 (JTA) — Three years ago this week, Donald Trump broke a fundamental promise to the American Jewish community from our nation’s founders.

Neo-Nazis and Klansmen marched on Charlottesville chanting “Blood and soil!” and “Jews will not replace us!” But instead of using the power of his office to marginalize this bigotry, President Trump egged on these white supremacists, equating them with those protesting their racism by insisting there were “very fine people on both sides.”

Vice President Joe Biden’s entire presidential campaign was ignited by Trump’s dereliction of duty that day. Biden believes we are in a battle for the soul of our nation, which Jewish Americans understand all too well.

Shortly after George Washington became America’s first president, he undertook to reassure the young nation’s religious minorities, including its Jewish citizens, that their rights would be safeguarded under this new republic. In his famous 1790 letter to the Hebrew Congregation of Newport, Rhode Island, he specifically pledged that the U.S. government “gives to bigotry no sanction” and, borrowing from the prophet Micah, swore that every citizen must enjoy genuine safety “under his own vine and fig tree, and there shall be none to make him afraid.”

But isn’t giving sanction to frightening bigotry exactly what Trump did before, during and after Charlottesville? It is why white supremacists gathered in Washington, D.C., in November 2016 to celebrate his election, railing against Jews and giving Nazi salutes. It is why white supremacists felt encouraged to converge on Charlottesville for their 2017 “Unite the Right” rally, where Heather Heyer was murdered when a neo-Nazi drove his car into a crowd of anti-racist demonstrators.

Trump tried to backpedal two days later, reading off a teleprompter that “racism is evil” and white supremacists are “repugnant.” However, as Bob Woodward wrote in his 2018 expose of the Trump presidency, “Fear,” Trump believes this apology was the “worst speech I’ve ever given” and “the biggest f***ing mistake I’ve made.”

Asked again by reporters only a year ago about his declaration that there were very fine people on both sides in Charlottesville, Trump insisted that he “answered perfectly.”

Meanwhile, the harm caused by Trump’s alarming rhetoric has been all too real, as Jews and many other communities who have felt the sting of the bigotry Trump sanctions can attest.

For example, just a week before Charlottesville, supporters of his call to exclude many Muslims from America attacked an Islamic community center near Minneapolis with a pipe bomb.

Barely one year after Charlottesville, a shooter animated by Trump’s conspiracy theory about an immigrant invasion, and thought Jews were to blame, murdered 11 worshippers at the Tree of Life synagogue in Pittsburgh, the deadliest attack targeting Jews in America’s history. That same week, a white gunman allegedly radicalized watching Trump’s presidential campaign also murdered two African-American shoppers at a grocery store in Kentucky after trying to force his way into a predominantly African-American church. Then, six months to the day after Pittsburgh, that attack inspired another deadly synagogue attack in Poway, California.

Sadly, we are also marking the one-year anniversary this month of the rampage in El Paso, the deadliest attack targeting the Latino community in America’s history. The perpetrator of that attack said he killed those 23 innocent people and injured 23 others as “a response to the Hispanic invasion of Texas” and that he was specifically hoping to target Mexicans.

We all know that Donald Trump launched his presidential campaign in 2015 based on the claim that Mexico is sending droves of immigrants into America, bringing “drugs,” “crime” and “rapists.” More recently, in the wake of the historic, largely peaceful protests against systemic racism, Trump has jumped to the defense of Confederate generals and branded the Black Lives Matter slogan “a symbol of hate.”

Last year, researchers with the Huffington Post documented over 800 hate incidents since Trump launched his campaign where the perpetrators hurled some version of the phrase “go back” or “get out” at their victims (absurdly, over 20 of these xenophobic incidents even targeted Native Americans). And in over 150 of these cases, the perpetrators even invoked Trump’s name or one of his slogans.

This year, hate crimes have skyrocketed against Asian Americans, exacerbated by Trump blaming the public health crisis on what he calls “the Chinese virus” and “Kung Flu.”  Instead of uniting Americans around responsible public health precautions, the president failed the test of office yet again, defending heavily armed anti-government extremists who stormed the Michigan State Capitol as “very good people.” That rally also included swastikas and other imagery trivializing Hitler’s crimes.

When demagogues look for someone to scapegoat, no one is safe. The moral contrast with Joe Biden, who denounces every form of hate and prejudice without hesitation, could not be clearer. Jewish Americans will overwhelmingly support Biden, an empathic, trustworthy and eminently qualified public servant who is determined to stand up to bigotry, to truly give it no sanction.