I organized a solidarity mission from Israel to New York City during the pandemic. This is what I heard. 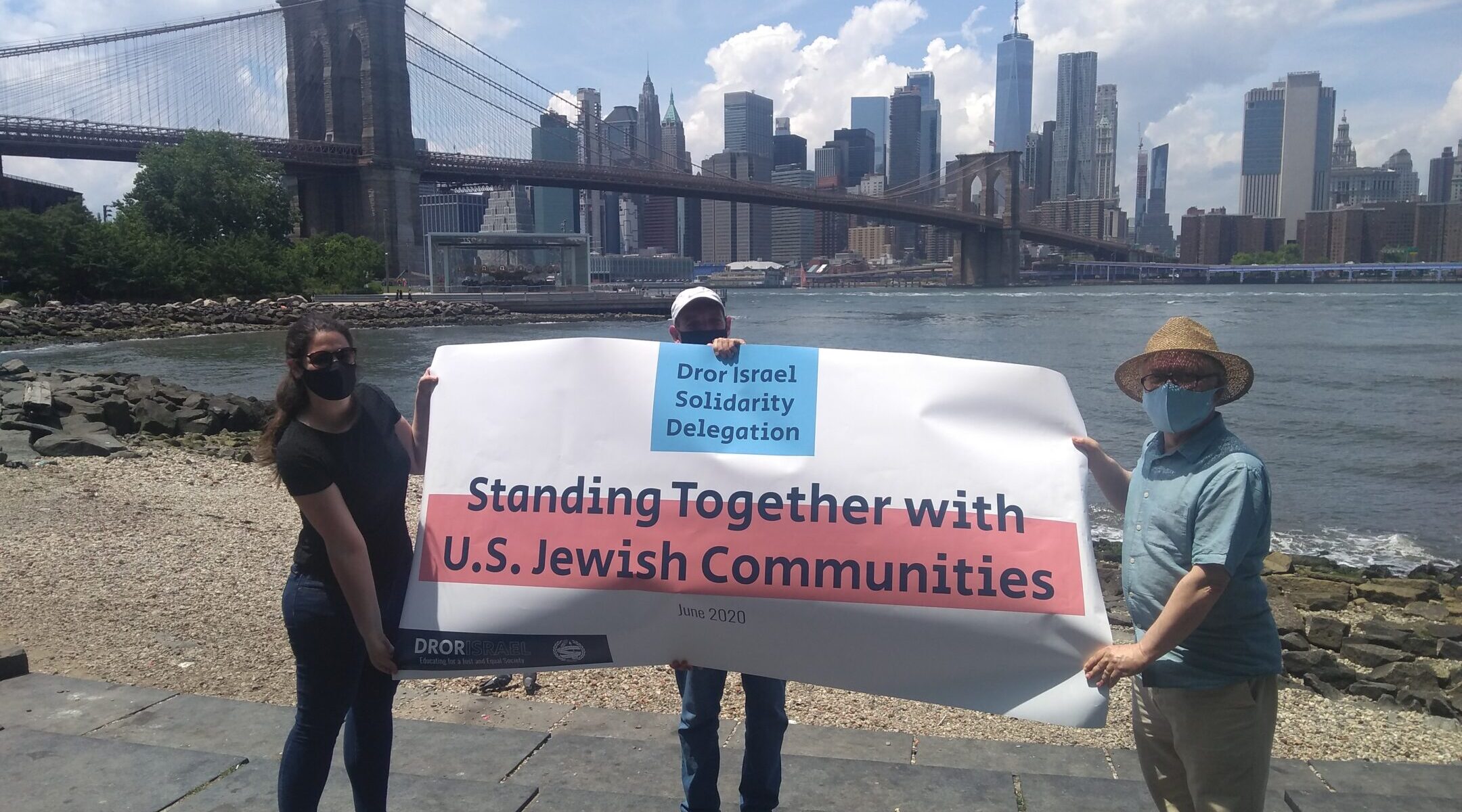 KIBBUTZ RAVID, Israel (JTA) — In June, during some of this pandemic’s darkest days, I boarded a plane in Tel Aviv and headed for the heart of American Jewry.

It might sound like a strange decision, but to me it felt obvious. For the last decade, I have flown three times a year to the United States to introduce American Jews to Dror Israel, the educational movement that I am a member of. People, synagogue communities and community groups get to know Israel through me and I get to know U.S. Jewish communities through them — a shining example of meaningful and diverse Jewish life.

In March and April, many of the American Jews I had gotten to know contributed to the coronavirus relief efforts of Dror Israel, which operates schools for at-risk youth in Israel and works with young Israelis to promote equality and inclusion in our society. But as the death toll ticked upwards in the United States, it became clear that American Jews would need just as much support. In my Zoom meetings, the gap between Israel and the United States seemed to grow: We were no longer experiencing the same thing.

The few Israeli initiatives to express solidarity — a declaration, a letter, songs on Zoom, an event at Jerusalem’s Old City walls — felt to me easy and insubstantial. I remembered the summer of 2014, when I hosted visits of U.S. Jewish leaders in shelters during Israel’s war in Gaza. The leaders did not just send money; they came themselves. They visited shelters. They ran to protected spaces when the sirens split the air.  They endangered their lives in order to send a message. Their physical presence had no political or financial significance, but it made all the difference in terms of our nation, humanity and friendship.

And I decided that it was our turn. It was a strange situation, maybe the first time that we needed to choose to express solidarity with the wealthy, successful, strong and proud U.S. Jewish community.

There was every reason not to make the trip. The travel would be risky, as would our time at the center of the pandemic in America. Israel’s required 14-day quarantine for people entering the country would mean a long time away from our families when we returned. Friends in the U.S. told us that no one would agree to meet with us at a time when everyone was being encouraged to stay home.

And yet. In my days in the youth movement I was educated toward giving back, toward commitment and solidarity. “You always came,” I thought. “During any type of emergency, war, military operation — you were always there for us.” I wanted to return the favor.

My colleague Hod and I bought tickets. Though many people told us they had left the city, by the time we picked up our car rental at the airport in New York, we had scheduled several meetings — all to take place outdoors, with masks and at a distance, to ensure safety for all.

In one meeting, we walked with Judy, a longtime donor and friend, along the Hudson River in Manhattan. She lamented the postponement of her daughter’s wedding and the sudden disappearance of so much that makes her city vibrant.

In Crown Heights, where haredi Orthodox young men pray outside closed synagogues, a young Chabad member told us about the pandemic’s onset in his neighborhood. “There was a sick person in every home,” he said. He listed community leaders and friends who died. My jaw dropped.

In New Rochelle, where the first case in the New York City area was identified, we met with Michael and Hannah, a couple in their 50s, on their porch. Like everyone else, they knew people who had been sick and who had died. It was clear they were afraid — although they also told us that the meeting, the first they had in more than 100 days, made them smile.

Not far from them lives a fundraiser for a large Jewish organization whom I have met many times in his office in Manhattan. In his backyard, he was dressed casually but still focused on the needs of his community. “On the one hand, fundraising is at peak. Some of our biggest donors have really stepped up,” he told us. “On the other hand, we are dealing with things that we never dreamed of … If you were to tell me that one day I would need to raise $250,000 in order to purchase a refrigerated truck because the Chevra Kadisha (Jewish burial society) can’t keep up with the pace of funerals, I wouldn’t have believed you — but that’s what’s happening.”

When we visited Washington Cemetery, a Jewish cemetery in south Brooklyn where mainly Jews from the former Soviet Union are buried, we heard the same thing. “Over three times more funerals than usual,” a cemetery representative explained. What is there to say?

The outgoing Israeli consul general, Dani Dayan, told us he had not had other Israeli visitors. “You are Nachshonim, the first,” he said, referring to the story of the first Israelite who dared to walk into a parted Red Sea. “No one even thought about coming.” He showed us a torn Israeli flag hanging in a frame in his office, telling us that it had been found in the wreckage of the World Trade Center after 9-11. “Bloomberg gave it to Shimon Peres who decided that it should be hung in Israeli territory in New York,” he said. Our tie is strong.

And yet it is also fragile. Miriyam and Idit, two Israeli women who manage educational programs in Israel for young American Jews, told us that few people will be making the trip this year. “There’s nothing going on,” Miriyam said. “All programming has stopped. Synagogues are closed, so are community centers. There are no summer camps, which are the heart of programming for Jewish youth. Jewish life has stopped.”

Layoffs have already started. Many organizations will not survive the financial crisis. For some American Jews, there may not be another opportunity for a Jewish or Israeli experience.

And there’s no certainty that when the pandemic is over everything will go back to how it was. As it is, there is growing tension in the relationship between Israel and U.S. Jewry. Israel’s attitude toward the Reform and Conservative movements (the largest in the U.S.) creates anger and bitterness in large sections of the Jewish community; political developments have threatened to exacerbate it.

When we asked the people we met about their views on solidarity from Israel, many seemed embarrassed. It’s a new situation. Some said that the Jewish community leadership does not want solidarity events. Israel doesn’t give us strength these days, they told us. And as to the question of how we can help, no one had an answer. There was only anxiety, isolation, grief, fear.

The crisis is deep and the bridge is narrow, very narrow. Arriving home to quarantine offered plenty of time to think about what was. And maybe even more than that, about what can and should be.

With cases now rising in Israel, I see here more of the anxiety and uncertainty that I saw in New York. Dror Israel is once again focused on emergency programming with the threat of a fresh lockdown looming. And yet I cannot stop thinking about what I saw on my trip.

The Jewish New York I saw was switched off. The community is in mourning, with great uncertainty about the future. The bridge to Israel is narrower than ever. This time, it’s our turn as Israelis to widen the bridge.

Gary Levy
Gary Levy is a leader in Dror Israel, an Israeli social movement that operates schools for at-risk youth and works with young Israelis to promote inclusion and equality.
The views and opinions expressed in this article are those of the author and do not necessarily reflect the views of JTA or its parent company, 70 Faces Media.