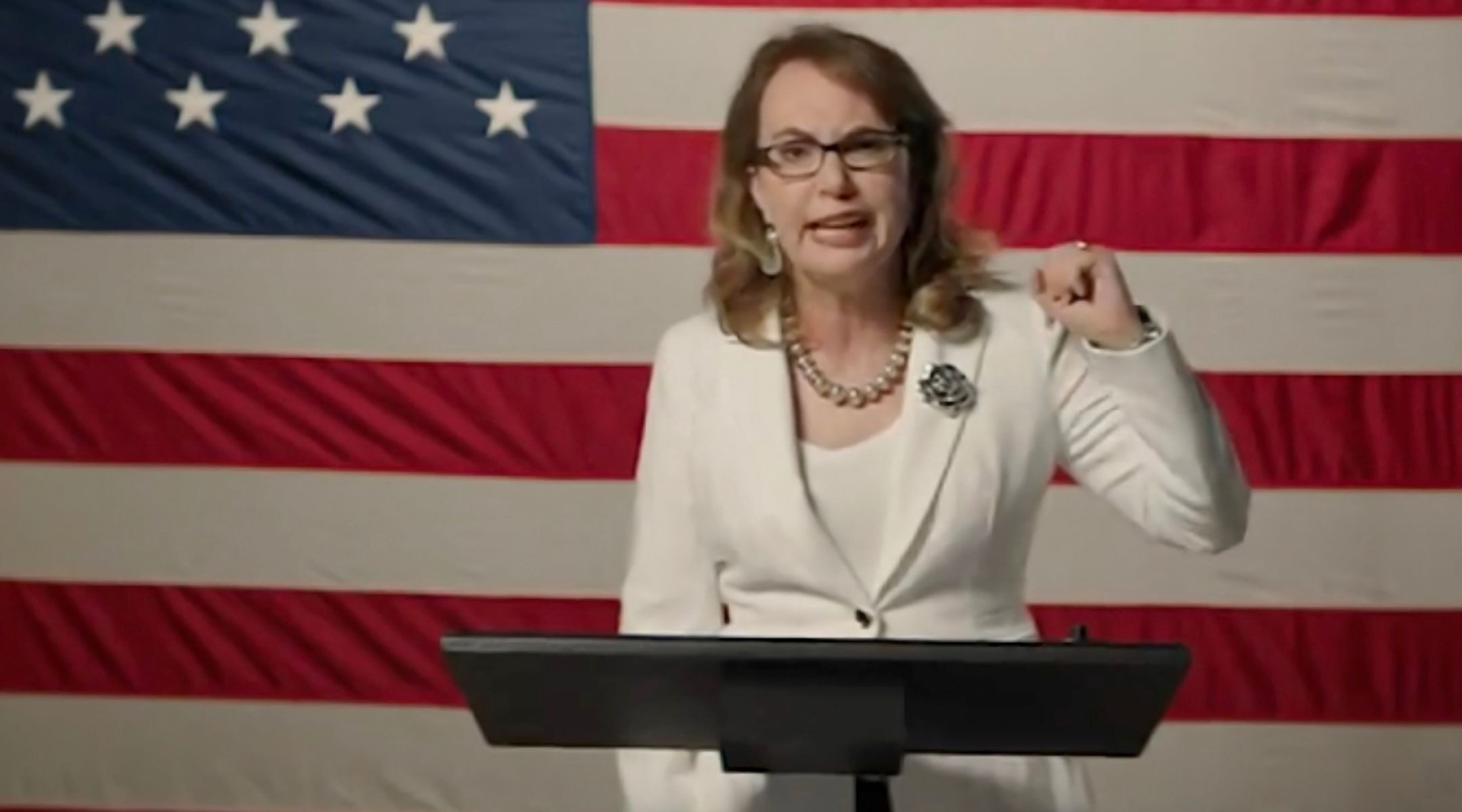 In this screenshot from the DNCC’s livestream of the 2020 Democratic National Convention, former U.S. Rep. Gabrielle Giffords addresses the virtual convention on August 19, 2020. (DNCC via Getty Images)
Advertisement

WASHINGTON (JTA) — Gabby Giffords, the Jewish former congresswoman who became a leader in the gun control movement after being shot by an assailant in the head in 2011, opened the third night of the Democratic convention with an appeal to elect Joe Biden president.

“We can let the shooting continue or we can act,” Giffords said in a recorded video that opened the proceedings Wednesday at the convention, held virtually because of the coronavirus pandemic. “We can protect our families, our future. We can vote. We can be on the right side of history. We must elect Joe Biden.”

Giffords described her difficulties since the attack, in which 18 people were shot, six fatally. “Words once came easily; today I struggle with speech,” she said. “But I have not lost my voice.”

Giffords’s husband, Mark Kelly, a retired astronaut, is running to flip Arizona’s Senate seat to Democrats. “Tonight, she gave her longest speech since she was shot nearly 10 years ago,” he said on Twitter. “She reminds me every day to never give up.”

Giffords drew cheers when she spoke on the same topic, also with difficulty, during the 2016 Democratic convention. The grim ranks of people affected by gun violence swelled since then, and on Tuesday night, during the roll call of delegates formally electing Biden as the nominee, Fred Guttenberg, whose daughter Jaime was killed in the 2018 attack on a high school in Parkland, Florida, announced the vote of Florida delegates. Guttenberg, who is Jewish, has become a leader in the movement to reform gun laws. (Another Jewish parent of a Parkland victim, Andrew Pollack, has argued against restricting gun ownership and will speak at next week’s Republican convention.)

While the first quarter-hour focused on gun control, and there were sections on undocumented migrants and climate change, much of the two-hour program Wednesday night was about the rise of women in politics, marking the 100 years since women won the right to vote. Featured were addresses by the 2016 nominee, Hillary Clinton, Speaker of the U.S. House of Representatives Nancy Pelosi, and by Massachusetts Sen. Elizabeth Warren, who ran against Biden in the primaries.

Among others featured in a montage of prominent American women was Ruth Bader Ginsburg, the Jewish Supreme Court Justice. There was a flash from her testimony during her Senate confirmation in 1993, explaining why she supported abortion rights. “If you impose restraints that impede her choice, you are disadvantaging her because of her sex,” Ginsburg said then.

It was also the debut of California Sen. Kamala Harris as the vice presidential nominee. Harris in a line stunning for a political convention appeared to allude to charges of sexual assault against President Donald Trump.

“I’ve fought for children, and survivors of sexual assault,” said Harris, a former prosecutor, and California attorney-general. “I’ve fought against transnational gangs. I took on the biggest banks, and helped take down one of the biggest for-profit colleges. I know a predator when I see one.”

Among the women introducing Harris was Ella Emhoff, the daughter of her Jewish husband, Douglas, who addressed her stepmother with the family’s Yiddish colloquialism “Momala.”

The keynote speech Wednesday was by former President Barack Obama, who delivered a stark warning about the dangers he said a second Trump term would pose to democracy.

Obama invoked the belief in American democracy by populations who had to overcome prejudice to take part, including Blacks, immigrants and Jews.

“Whatever our backgrounds, we’re all the children of Americans who fought the good fight,” he said. “Great grandparents working in firetraps and sweatshops without rights or representation. Farmers losing their dreams to dust. Irish and Italians and Asians and Latinos told to go back where they came from. Jews and Catholics, Muslims and Sikhs, made to feel suspect for the way they worshipped. Black Americans chained and whipped and hanged. Spit on for trying to sit at lunch counters. Beaten for trying to vote.”