How Buenos Aires’ Jews have weathered the pandemic 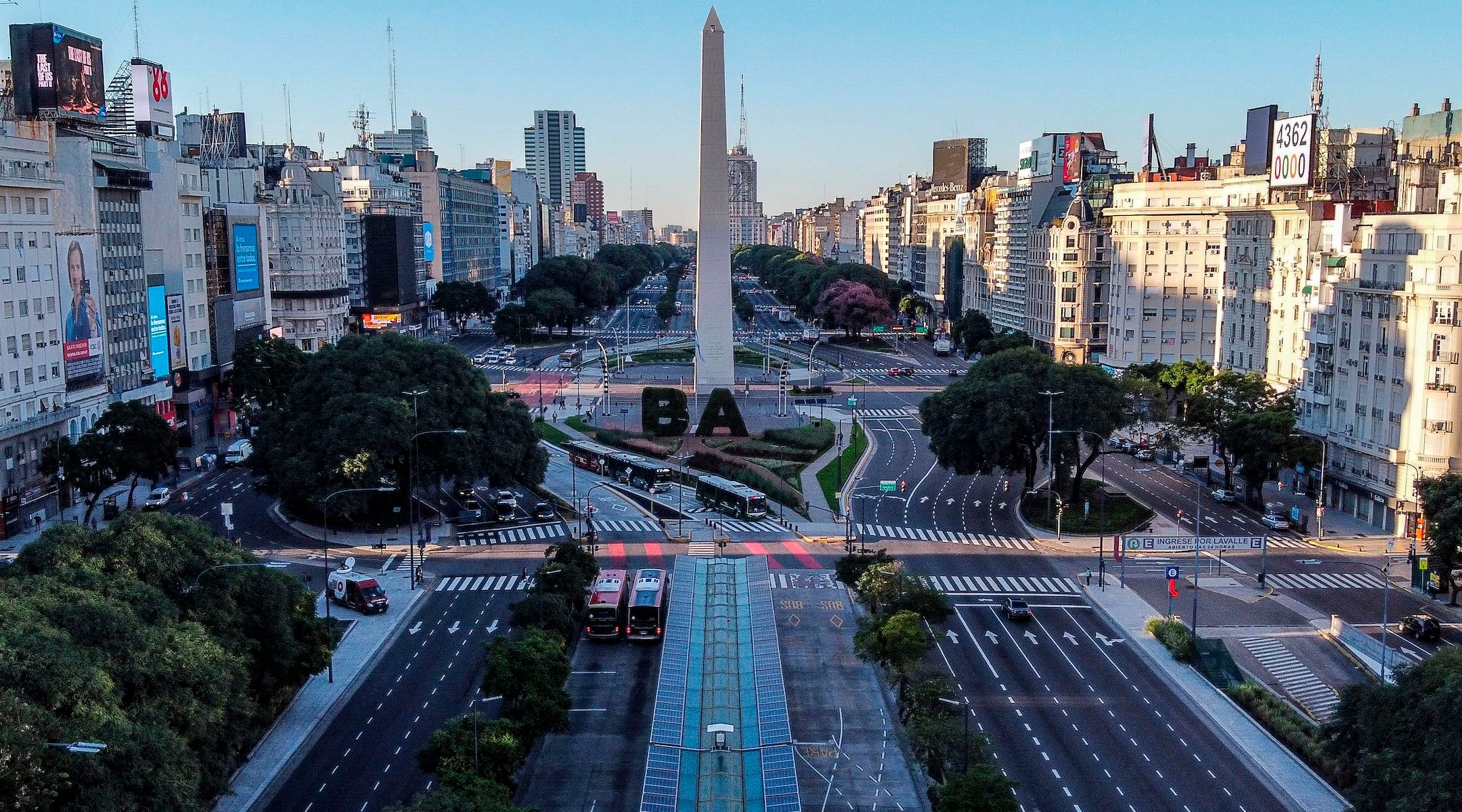 BUENOS AIRES (JTA) — Since March 20, Argentina has imposed one of the world’s strictest COVID-19 quarantines, and its capital city, home to most of the country’s Jewish community, isn’t opening back up anytime soon.

Jewish schools and synagogues have been closed for five months — but so have most of the city’s industrial and commercial activities. It has led to a local economic crisis that’s affecting most of the city’s businesses, Jewish and non-. The first half of 2020 showed an inflation rate of approximately 20 percent and now the peso, the local currency, is quickly losing value: In January one needed 63 pesos to buy one dollar; now it’s over 120 pesos.

Despite the shutdown, the virus is still advancing in Argentina. The National Health Ministry reported a new high record of deaths (283) in one day on Aug. 19. Since the start of the pandemic, nearly 312,000 people have now been infected with COVID-19, with 6,330 fatalities.

Frustrations have boiled in the Jewish community — early on in the crisis, in March, members of an Orthodox congregation were arrested for trying to operate a mikvah, or ritual bath, and later a bride and groom were arrested at their own wedding for convening such a large gathering. One Orthodox rabbi said Tuesday that “Judaism in Argentina has reached a low point.”

For the first time ever, the normally widely-attended events commemorating the deadly Israel embassy and AMIA Jewish center bombings that took place in the city in the 1990s were broadcast online.

But there have been bright spots, too, such as an agreement between the Orthodox community and government on how to keep rituals going safely, and an operation that brought in nearly 100 Israel rabbis to certify a backlog of thousands of tons of kosher meat.

Here’s how some other local Jewish institutions are faring as the pandemic drags on. 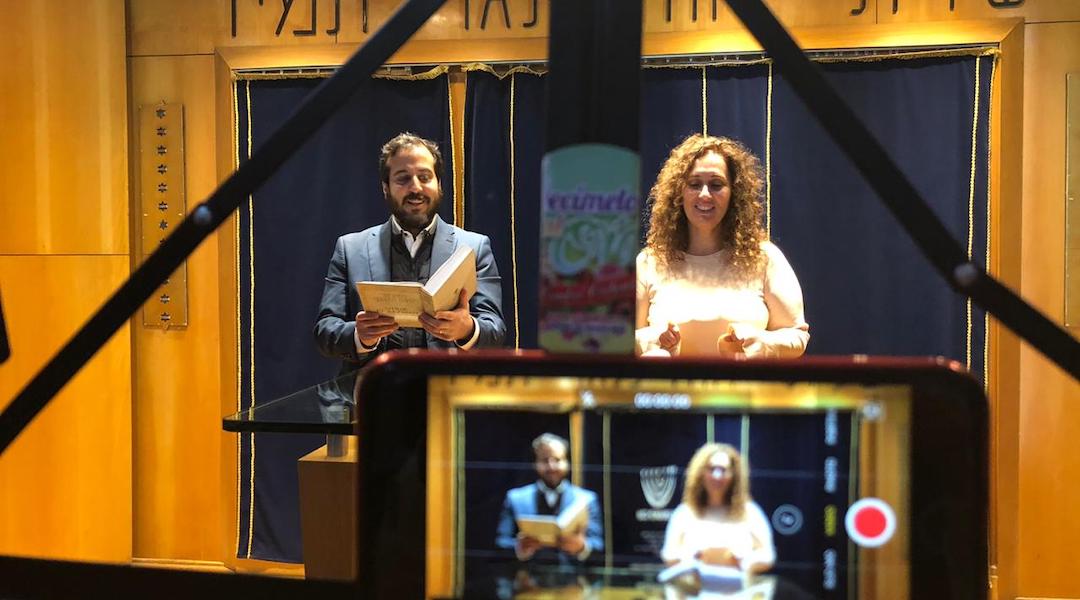 Many have clamored for the government to restart some recreational and economic activities, and since July 18, the city has seen a few gradual reopenings. Synagogues can open for 10 members at a time, as long as masks are worn and sanitary protocol is followed.

But despite the new measures, many temples will remain closed to the public and will continue to offer online services over the fear of the virus’ continued spread. It’s currently winter in the South American country.

“The government and the society are seeking some normalization, but the risks still exist,” said Ariel Stofenmacher, 57, the rector of the Conservative Latin American Rabbinical seminary.

“The flexibility is motivated by economic needs, people are fed up. But we are still in the middle of winter and without a vaccine, I won’t call the people to gather,” added Alejandro Avruj, 50, the rabbi of Amijai, which has put Kabbalat Shabbat services featuring prominent musicians online.

The Orthodox Chabad Lubavitch movement opened its institutions with the mandatory sanitary protocols in place. “We will open our temples to 10 people with strict measures of sanitization and all the requirements of the government regulation to protect our people,” said Tzvi Grunblatt, 66, the general director of Argentina’s Chabad chapter. 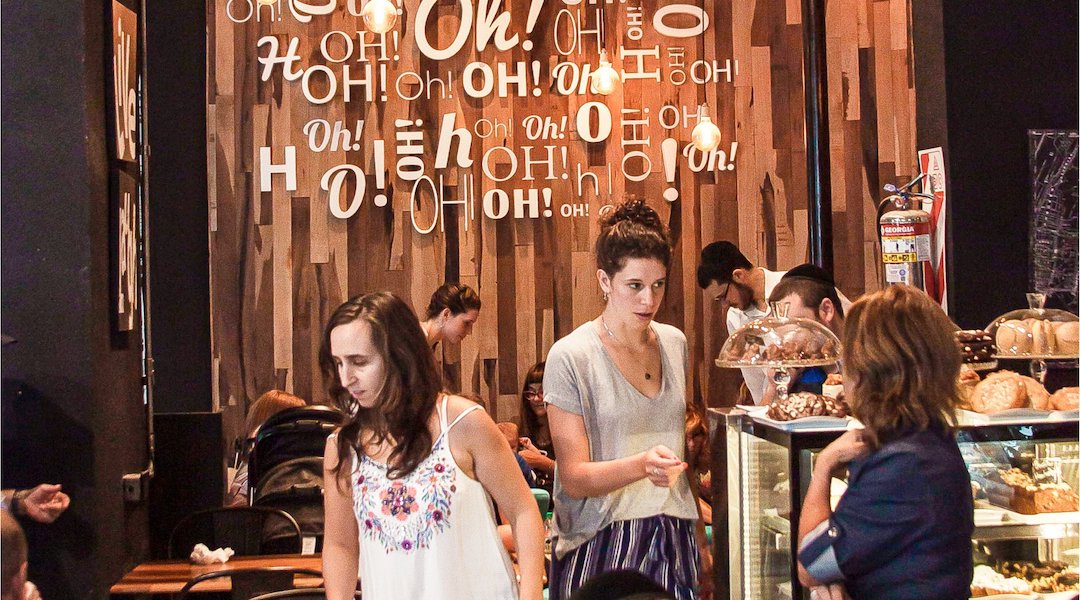 Kosher food here — which has mixed Sephardic and Ashkenazi immigrant flavors with traditional Argentine meat — has become an attraction for Jewish tourists.

The local market for kosher food is about $25 million a year, according to information provided by the city. The city has held a kosher festival since 2013, and 11 city hotels have kosher certification with employees trained to help the kosher tourist.

Restaurants have been closed since March 20, and many of them are struggling to survive — but some have surprisingly found an opportunity to grow. Brothers Leandro, 42, and Esteban Olsztajn, 44, opened a kosher deli restaurant three years ago in the heart of the Orthodox “El Once” neighborhood of Buenos Aires, just between the Orthodox Toratenu school and the Maccabi Jewish community center.

The “Oh brothers,” as they’re called, aimed to recreate some of the atmosphere of a Manhattan Jewish deli at their restaurant that bears their nickname — but they sell all kinds of Jewish food, kosher sushi and other fusion food. After expanding their delivery service during the pandemic, they have tripled their sales.

When Esteban was asked why he thought that happened, he replied: “I believe in God, do you?”

Esteban is Orthodox, but his brother and business partner is not. He offered another explanation.

“After the shutdown, we started to receive orders from every corner of the city, and not just from our close neighbors,” Leandro told JTA. 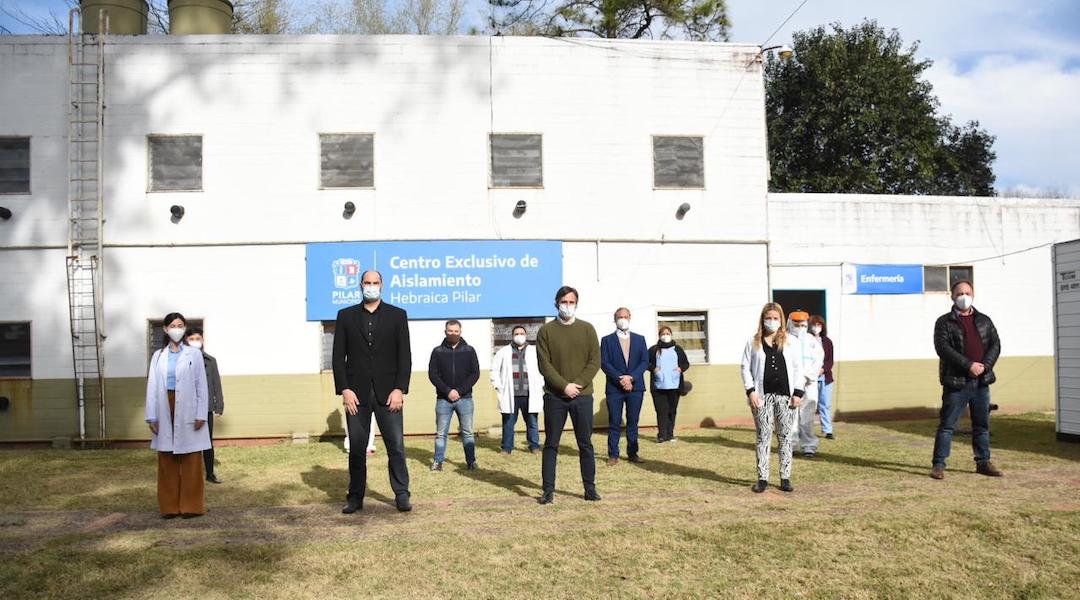 The Buenos Aires Jewish community center, called Sociedad Hebraica Argentina, is one of the city’s biggest Jewish hubs, home to youth sport leagues, classes, professional classes, adult programming and more. It had to shift all of that online quickly — but it found another way to be useful.

Part of its 420-acre open air site in Pilar, a city of 300,000 just outside of Buenos Aires, was turned into a temporary hospital. The Municipality of Pilar ran the site, which had 230 beds available for COVID-19 patients. And this was just one example.

According to the Argentine Jewish umbrella organization, DAIA, all of its 140 institutions across the country offered its facilities and volunteers to the national and local governments to help with the crisis. They did so while undergoing an economic crisis of their own, as members have found it harder to pay for membership fees.

Like Hebraica, another well known Jewish community center is Hacoaj, a sports and cultural club with around 7,500 members in Tigre, a city in the north of Buenos Aires province (besides the city of Buenos Aires, which is the capital of the country, there are also a province with the same name). Hacoaj has organized an array of “at home” activities and discounted membership by 20 percent. Some members have donated their discounts to help other members in more need. 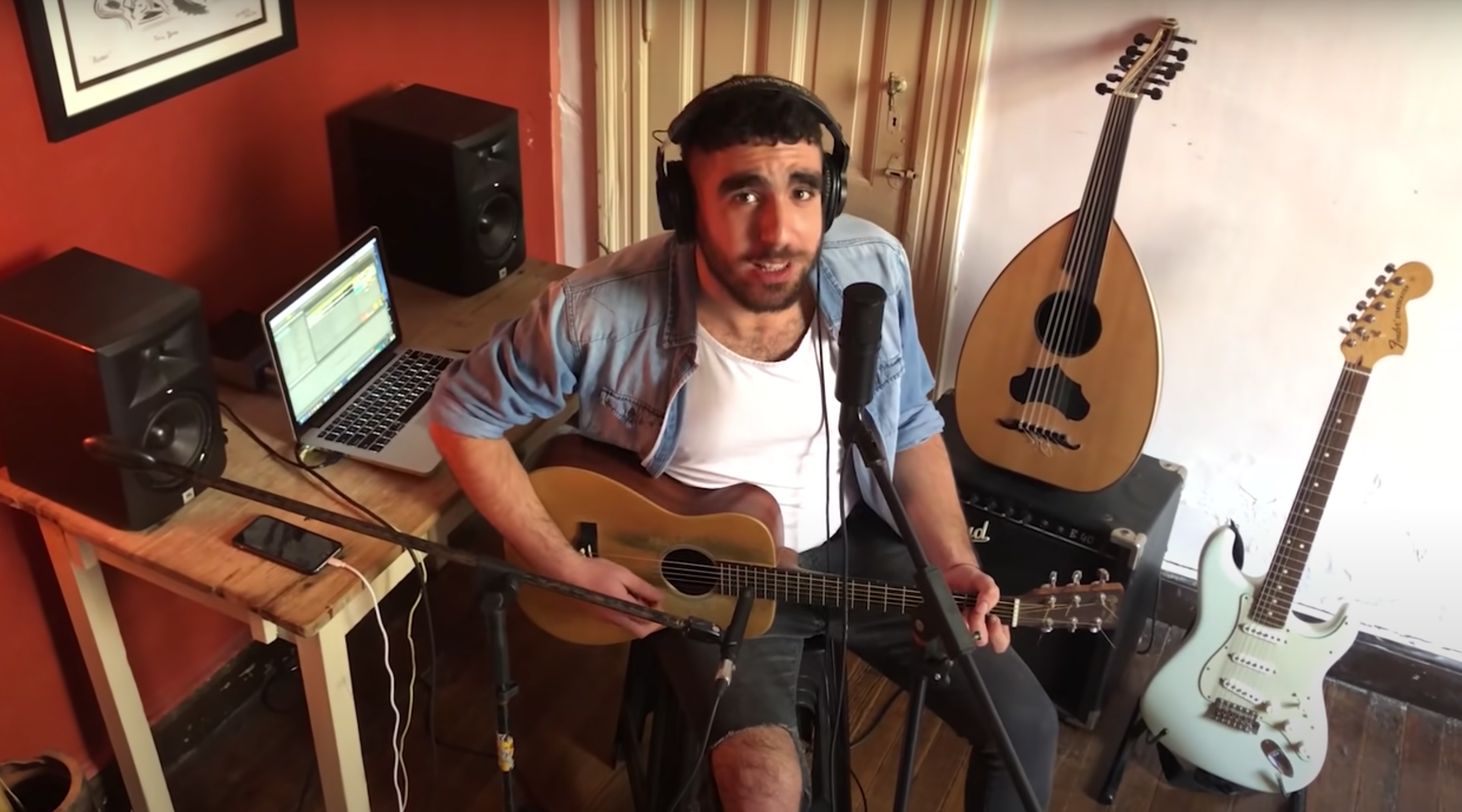 Buenos Aires is home to about 159,000 Jews, according to the 2018 World Jewish Population study by expert Sergio Della Pergola, giving Argentina the largest Jewish population in Latin America.

Local Jewish businessmen, artists, professionals and creatives have been hit hard by the general slowdown and the strict prohibitions on social gatherings and events.

Among the event and show cancellations was the country’s 72nd Israel Independence Day celebration, organized by the Argentine Zionist Organization. The main attraction was going to the local klezmer band “La Kosher Nostra,” a group that started small in 2011 but now plays to thousands of fans at stadiums across the country. In 2016, the group played two shows to crowds of 10,000 in South Africa.

“To honor Israel, we recorded a video with the participation of more than 60 Argentinean artists,” Jonathan Strugo, 27, one of the creators of the band, told the Jewish Telegraphic Agency. 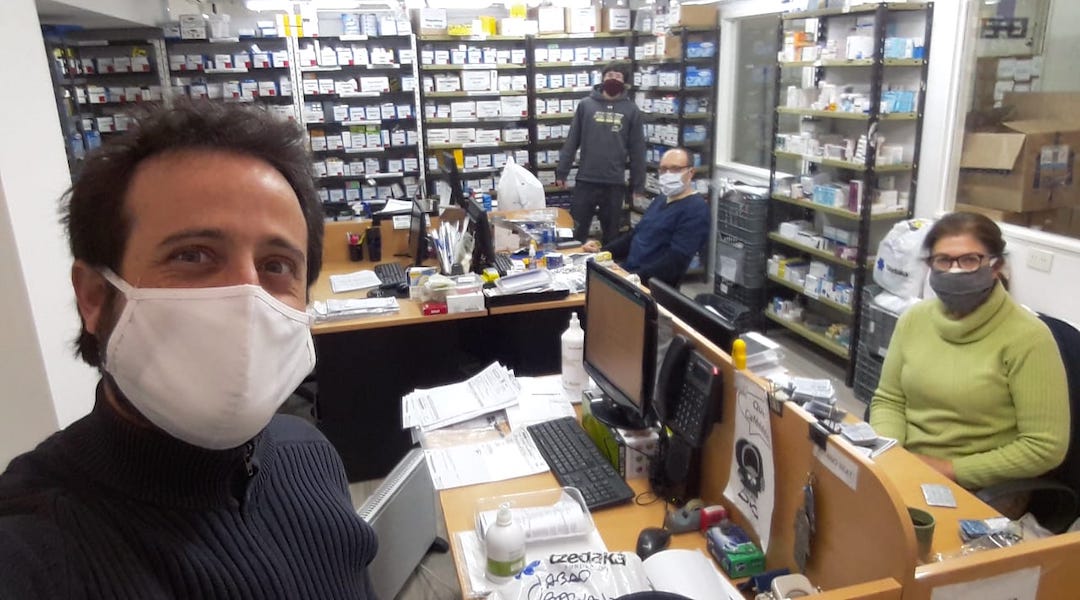 Every week, directors of the city’s largest Jewish schools, such as Scholem Aleijem, ORT, Martin Buber, Tarbut, Beth, among others, have Zoom meetings to discuss the situation. Most of them have reduced their costs, but the financial crisis isn’t getting any easier.

Prior to the pandemic, the AMIA Jewish group fielded about 40 new requests every month for economic assistance. Since the quarantine was established, that figure jumped to more than 500 a month (an increase of 1,200 percent).

The office of AMIA that coordinates activities with communities all across the country, called Vaad Hakeilot, launched a platform that allows people to donate to different Jewish institutions.

A special section focused on education got mainstream media attention and raised $400,000.

“The request for help has grown by three times,” economist Miguel Kiguel, 66, president of the Tzedaká Foundation, an NGO focused on charity, explained in a recent interview. “There are lots of cases of people that have jobs, that have a social life, but since the lockdown all those fundamental structures began to fall.”

Tzedaká has implemented an emergency program called Guesher (“bridge” in Hebrew), funded by the American Jewish Joint Distribution Committee, to help Jewish families in Buenos Aires with a temporary economic assistance program to cover their basic needs, such as food, health, and housing, for a maximum period of six months.

Film and photography hit a wall 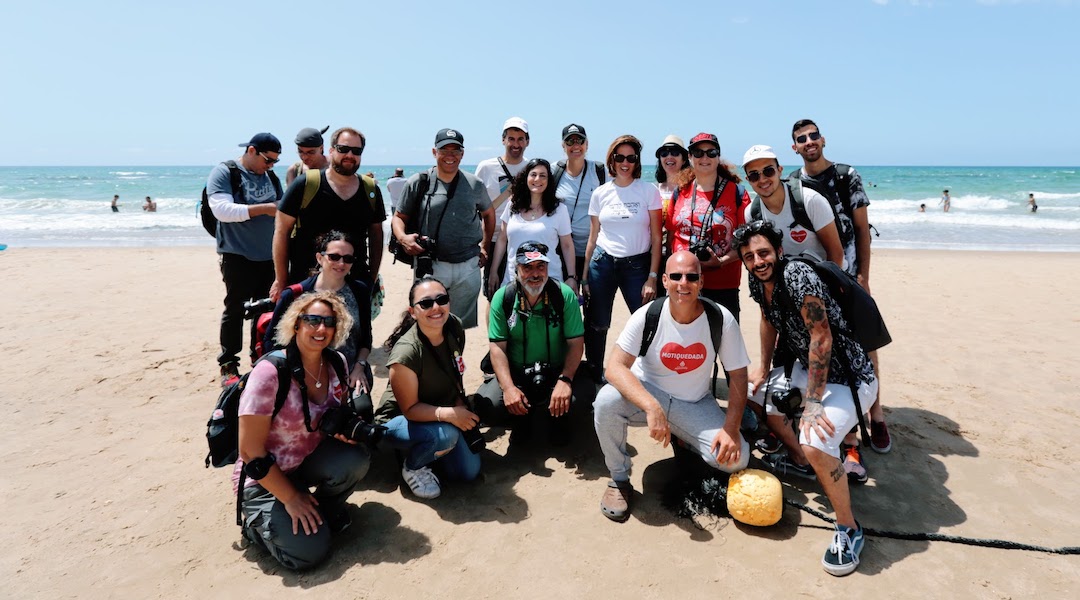 Jonas Papier, second from right in front row, with photography students in Tel Aviv in 2019. (Courtesy of Motivarte)

Jonas Papier, 50, runs Motivarte, runs one of the world’s most-awarded photography schools. It has 2,000 students and has earned a record seven nominations for the World Photography Organisation’s Student Focus prize. A Motivarte student won the 2017 edition.

The school has entered into teaching agreements with Betzalel, the famed Israeli Academy of Arts and Design, and Papier has travelled to Israel several times to teach. In 2019, he took to the Tel Aviv streets to give his famous-at-home class on street photography — in Spanish, Hebrew and English.

He had planned a 2020 edition in Tel Aviv with new projects to engage other Israeli institutions.

“We miss the trip to Israel. The school building is empty. Now I’m very busy transforming the whole concept of the school into a virtual platform,” Papier said. “The good news is that we are recovering our staff of teachers with some professionals that have taught here in the past and are now living in Europe and Israel.”

The creator of the festival, Luis Gutman, 73, explained to JTA that the devaluation of the peso made it difficult for him to buy the rights of movies to exhibit at the festival. For 16 years, the festival showed films at the Cinemark cinema chain for two weeks in November.

“Cinemark cannot assure yet whether cinemas will reopen this year and it is not profitable for me to purchase the rights of movies and exhibit them online; so if the cinema industry remains closed, I’m thinking that there won’t be a festival this year and we will resume activities in 2021,” he said.

One thing is certain, though.

“For sure it will not be an online festival,” Gutman said.