Lee Zeldin, one of the 2 Jewish Republicans in Congress, is in a dead heat in his House race 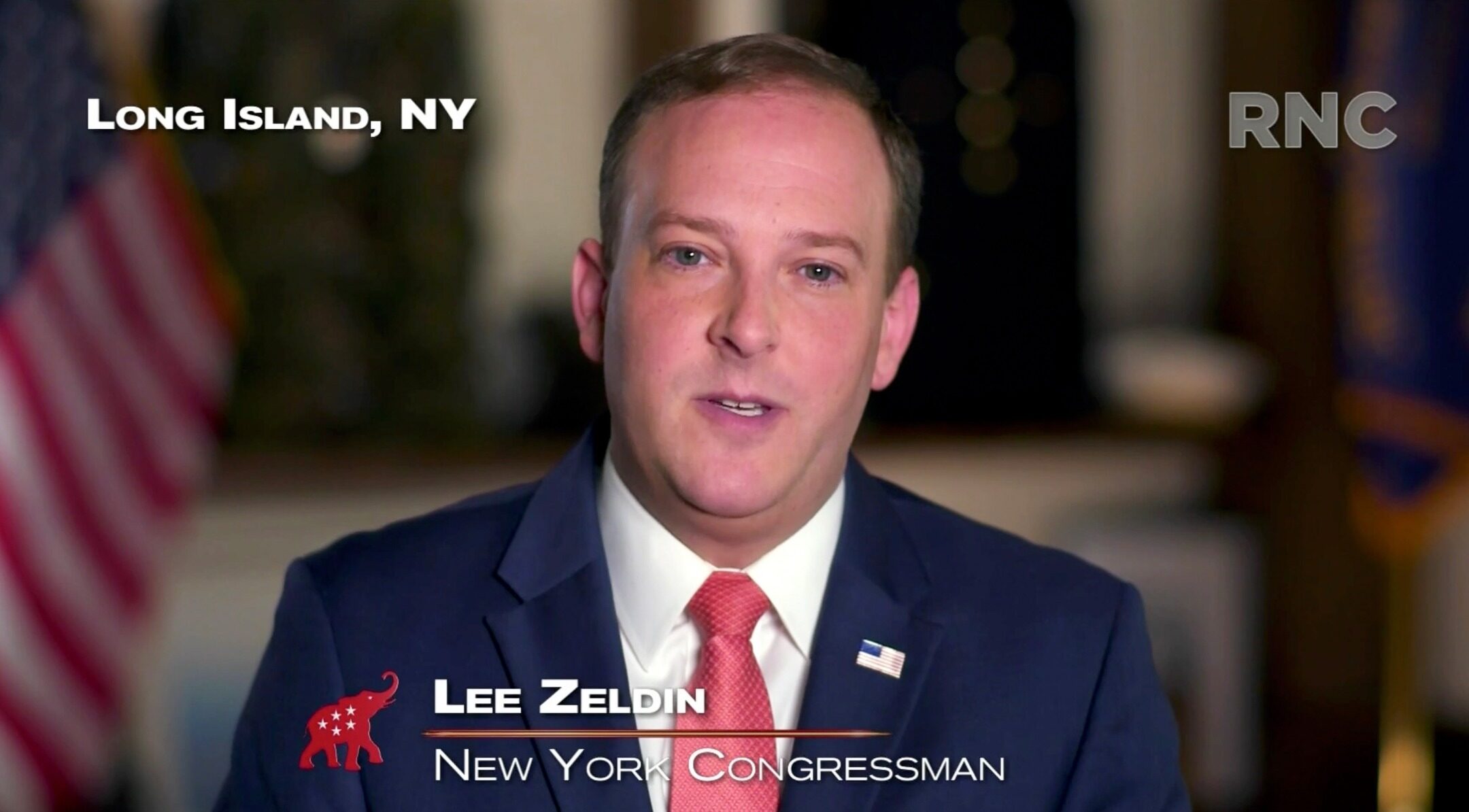 WASHINGTON (JTA) — Lee Zeldin, the Jewish Long Island Republican congressman, made the case for President Donald Trump by talking up his own service to his constituents and telling a harrowing personal story.

In getting a good word in for himself, Zeldin’s pitch for Trump Wednesday night was affecting and also typical of the genre: He described the premature birth of his twins, and how the expertise of the medical staff who saved them engendered an affection that helped spur him to ask Trump and his son-in-law, Jared Kushner, to rush personal protective equipment to his district’s first responders.

“The president’s effort for New York was phenomenal,” he said. “For our nation to emerge even stronger, more prosperous. freer and more secure than ever, to make our country, greater than ever before, we must reelect President Trump.”

Zeldin is a star in the Trump universe. In looking ahead to Zeldin’s speech, Trump campaign spokesman Tim Murtaugh played up Zeldin’s military service. “He himself is also an Iraq war veteran currently serving as a lieutenant colonel in the U.S Army reserves,” he said.

Outside of the bubble of the virtual RNC, Zeldin’s campaign is a little less confident these days after the most recent poll of his race, which was released Aug. 20: His political newcomer opponent, Nancy Goroff, leads 48-46% — a tie within the margin of error.

A loss for Zeldin, one of the only two Jewish GOP members of Congress, could have significant repercussions for Republican efforts to bring over Jewish voters. Republicans point to Zeldin as an example of how the party, short on Jewish officeholders, is moving to accommodate Jewish candidates and promote them.

The party has made Zeldin its lead congressional spokesman on Israel issues, and unlike David Kustoff of Tennessee, his Jewish Republican colleague in the House, Zeldin is ubiquitous on the right-wing Jewish circuit. He also took the lead among Republicans in speaking out against freshman congresswoman Ilhan Omar, the Minnesota Democrat who said pro-Israel lawmakers are bought and paid for.

A Zeldin loss also would be another blow for the pro-Trump Jewish community. While many conservative Jews, from the likes of commentators such as Bill Kristol and former top government officials like Eliot Cohen, have denounced Trump, Zeldin has been among the president’s fiercest defenders. He has stayed loyal through controversies that American Jews have used to critique Trump, including the president’s equivocation following the neo-Nazi march in Charlottesville, Virginia rally in 2017.

Zeldin and Perry Gershon, his 2018 opponent in New York’s 1st Congressional District, which covers the eastern stretch of Long Island, sparred constantly, including on Jewish issues, in a bitter election fight. Gershon got within clawing distance in the final vote: After double-digit wins in 2014, his freshman election, and in 2016, Zeldin won in 2018 by less than 4 percentage points.

Taking note of the shrinking margin, Zeldin is recasting himself as a bipartisan centrist. When the results were announced in the Democratic primary in his district, Zeldin sent a news release that didn’t mention Goroff but noted his record working across the aisle. The statement said the incumbent was the “12th most bipartisan” member of Congress and listed his legislative accomplishments.

Zeldin has worked closely with the Democratic chairman of the U.S. House of Representatives Foreign Affairs Committee, Eliot Engel, a distant cousin. (Engel was ousted in a primary by a progressive challenger.) He also joined with four other House members to launch the bipartisan Black-Jewish caucus.

Zeldin’s omission of any mention of Goroff also could have signaled that he was caught off guard, as Gershon was widely expected to win the Democratic nod again. Goroff, a chemistry professor at Stony Brook University, eked out a victory by less than 2 percentage points. (It took weeks to count the votes in the June 23 primary because of the pandemic.) 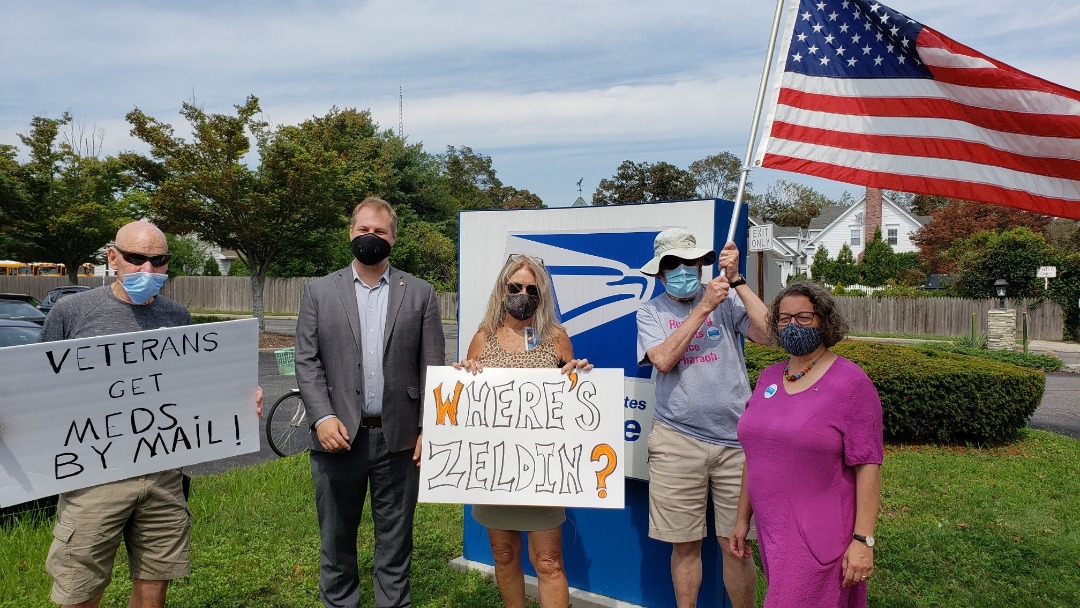 Unlike Zeldin, Goroff is naming her opponent — a lot. Much of her focus is on the Trump administration’s handling of the pandemic and its proposed cuts to the postal service, but she’s also borrowed a page from Gershon’s 2018 playbook and emphasized Zeldin’s ties with Trump, who is increasingly unpopular in the district.

Zeldin’s “lack of condemnation” of Trump “is striking,” Goroff told the East Hampton Star last week. “But it goes well with his general fealty to the president and efforts to ingratiate himself, which have been successful.”

In the same interview, Goroff attacked Zeldin for posting “Russian propaganda” depicting U.S. rioting on his Twitter feed. In a rare statement addressing the challenger, Zeldin’s campaign accused her of advocating defunding the police. Goroff says she opposes defunding the police.

Neither the Zeldin nor Goroff campaigns returned requests for interviews.

When Trump’s one-time adviser Steve Bannon, who has been associated with white nationalists, was arrested last week in an alleged scam, Goroff posted on her Twitter feed old clips of Zeldin praising Bannon, who fundraised for Zeldin.

The Democratic Congressional Campaign Committee named Goroff one of its top-tier “red-to-blue” priorities for ousting GOP incumbents. It said in a release that she had shown formidable campaigning and fundraising skills. Goroff has raised $2.6 million to Zeldin’s $4.8 million, but hundreds of thousands of dollars have come in since she won the primary. The Cook Political Report has moved the district from likely Republican to leaning Republican.

Goroff is backed by J Street, the liberal Jewish Middle East policy group, which has raised $60,000 for her campaign. In June, Goroff told The Times of Israel that she is pro-Israel, backs a two-state solution and opposes any plans for Israel to annex parts of the West Bank as “destabilizing.”

A year ago, when Trump accused Jews who vote for Democrats of being “disloyal” to other Jews and to Israel, she denounced the president. (So, in a rare break, did Zeldin.)

“As a Jew and a Democrat, I find Trump’s comments deeply offensive,” she said on Twitter. “We need bipartisan action, but instead our President is attacking Americans based on the combination of their religious views and political affiliation. Enough!”

J Street’s political action committee this week sent out an appeal to fundraise for three candidates who have a shot at unseating speakers at the Republican convention. Goroff is one of them.

Zeldin this week released his first TV ad, and there’s no mention of Trump or Goroff; it’s all about his support for law enforcement.

Gershon, who has endorsed Goroff, said it was a smart play for her to attach Zeldin to Trump.

“We’re in this weird world where everything revolves around Trump,” he said in an interview. “Everything with Zeldin is praise for the man, and the man is responsible for the pandemic and there is an unconscionable number of sick people in the United States — and most people blame Trump.”