For this prominent Jewish Republican, Trump’s ‘disloyalty’ jab is a bridge too far 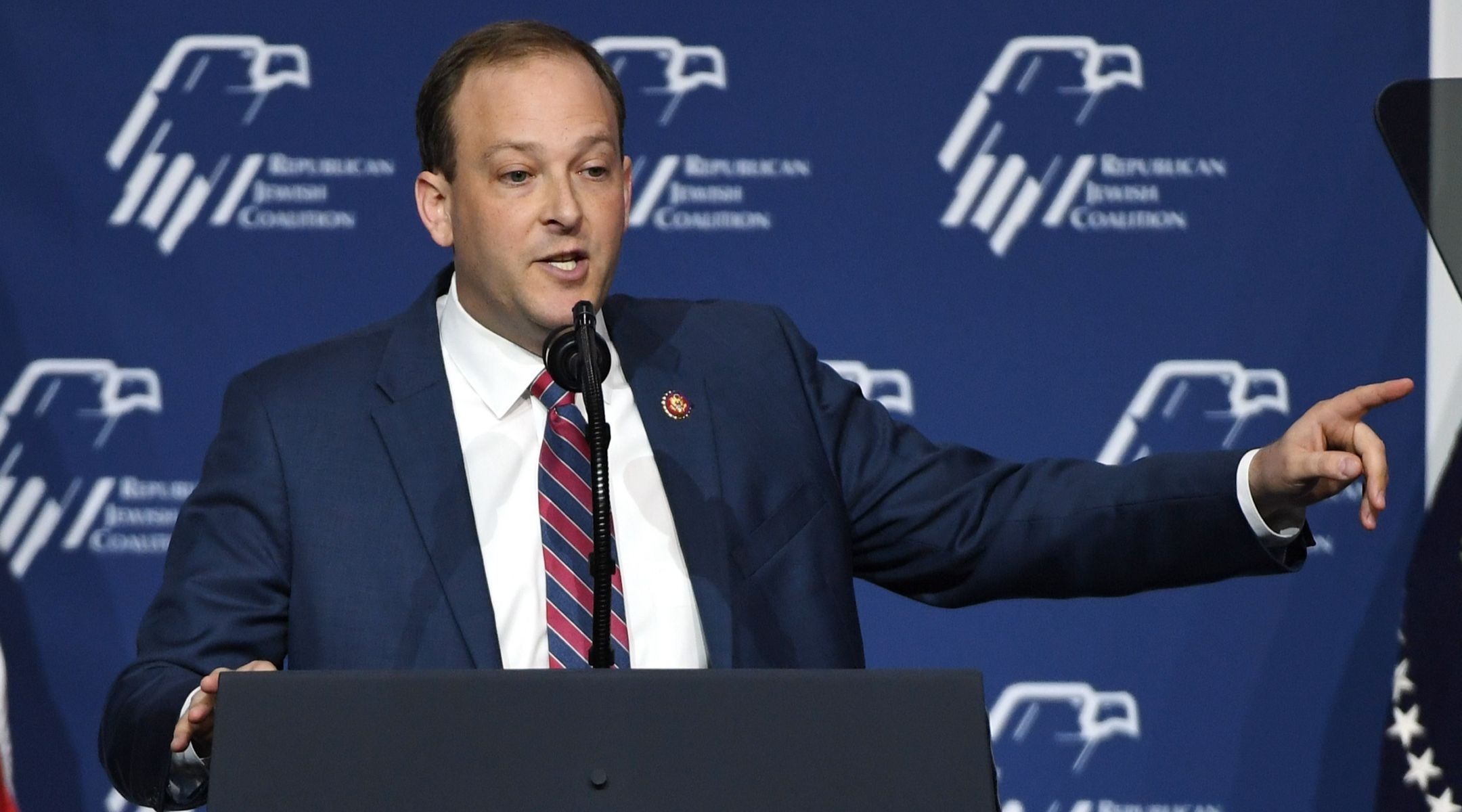 WASHINGTON (JTA) — Of the many Jews unsettled by President Donald Trump’s claim that voting for Democrats would demonstrate “disloyalty” to Israel and to other Jews, Lee Zeldin might be in the toughest spot.

The New York congressman, one of only two Jewish Republicans in the U.S. House of Representatives, has been an ardent Trump supporter and defender, but he could not bring himself to say this term was okay.

Since Trump dropped the “disloyalty” bomb, a number of Jewish conservatives have defended the use of the term, among them columnists at the conservative Jewish news site JNS, the head of the Republican Jewish Coalition and Michael Glassner, the former American Israel Public Affairs Committee senior staffer who is Trump’s reelection campaign COO.

Other Jewish conservatives, among them David Harsanyi at The Federalist, like Zeldin say the word was poorly chosen, even if they cheer Trump on for taking on Democrats who have relentlessly criticized Israel.

But Zeldin’s discomfiture stands out because his party has made him a standard-bearer for its pro-Israel stance. He chairs the House Republican Israel Caucus.

Zeldin also has a good working relationship with Rep. Eliot Engel, D-N.Y., the Jewish and Democratic chairman of the U.S. House of Representatives Foreign Affairs Committee, which Zeldin sits on.

“There are a dozen significant policy issues about what [Democratic critics of Israel] said and what they’re promoting that the president can do that without using those words,” Zeldin said.

There’s a specifically Jewish question arising out of Trump’s contention that Jews who vote for Democrats are disloyal to Israel and to other Jews: Is this how Jews want to talk about one another? A president has two great powers, unfettered by law and Congress — pardoning criminals and shaping a discourse. Is “disloyalty” now part of the Jewish vocabulary?

On Tuesday, after attacking two Democratic congresswomen who are highly critical of Israel and who back the boycott Israel movement, Trump said that “any Jewish people that vote for a Democrat — it shows either a total lack of knowledge or great disloyalty.”

And when reporters wondered the next day, “Disloyalty to whom?” he clarified: “If you vote for a Democrat,” he told reporters, “you’re being disloyal to Jewish people and you’re being very disloyal to Israel.”

Jewish organizations on the left said from the get-go that putting “Jewish” and “disloyal” in the same sentence, whatever the intention, was anti-Semitic. Then the centrists weighed in: Anti-Defamation League’s CEO, Jonathan Greenblatt, said the remarks were anti-Semitic. The American Jewish Committee’s David Harris said they were enabling anti-Semites.

The Republican Jewish Coalition did not quibble with Trump’s suggestion that Jews who vote for Democrats are betraying Israel and their fellow Jews.

“President Trump is right, it shows a great deal of disloyalty to oneself to defend a party that protects/emboldens people that hate you for your religion,” the Republican Jewish Coalition said on Twitter, even before Trump clarified that was what he meant.

Jewish partisans have been fighting for supporters and voters for years. But it is unlikely that even at the height of the bitterest of battles, over the Iran nuclear deal, one mainstream Jewish leader would have suggested the other was “disloyal” to Israel or their fellow Jews.

Has Trump then reframed such disagreements by using a term, “disloyalty,” that is only a skip away from “treason” — and even “self-hatred”?

Matt Brooks, the RJC director, doesn’t think so, and insists Trump was putting into blunt terms what Jewish Democrats have long said about Republicans.

“The president is not plowing any new fields here,” he said in an interview.

Brooks said that Jewish Democrats promote their own problematic trope — that their party is better aligned with Jewish values. He mentioned his counterpart, Jewish Democratic Council of America director Halie Soifer, who debated Brooks at an American Jewish Committee conference in June. Soifer spoke of values, including advocacy for human rights and reproductive rights, that her party embraced.

“The Republican Party under President Trump has enacted policies that are antithetical to those values,” she said then.

I put it several times to Brooks that “antithetical” was not equivalent to “disloyal,” which attaches not to a policy, but to a person, and which implies intent. He insisted that Democrats were implying disloyalty, but also acknowledged, like Zeldin, that he would not use the term “disloyal,” instead preferring “misguided,” which does not imply intent.

What happens if it sticks? How do you work with someone you think is disloyal, or who thinks you are disloyal?

Zeldin said that he believes Trump is right on policy and that he hopes Democrats marginalize — “crush,” in his words — the Israel-critical minority Trump was targeting when he made the “disloyalty” comment. But while Trump keeps insisting that the two pro-boycott congresswomen, Rashida Tlaib of Michigan and Ilhan Omar of Minnesota, are the “face” of the Democratic Party, Zeldin notably acknowledges that Democrats have pro-Israel leaders within their ranks.

Two days before the disloyalty kerfuffle, a pro-Israel group urged both Democrats and Republicans to refrain from painting the other party according to its extremes. The appeal did not come from a mainstream Jewish group, but a hawkish Christian one: Christians United for Israel.

CUFI’s statement referred to the previous week’s Israel-related drama, when Prime Minister Benjamin Netanyahu’s government barred Tlaib and Omar from entering the country. But it might have as easily applied to the Disloyalty Affair.

“The leaders of both parties should keep their fringe elements in check and stop attributing the views of these outliers to the opposition,” CUFI said. “Allowing a handful of anti-Israel Members of Congress to hijack Congressional action on Israel has gone on long enough.”