At The Bad Jew, this Los Angeles chef serves ‘porkstrami’ and other nonkosher takes on Jewish deli food 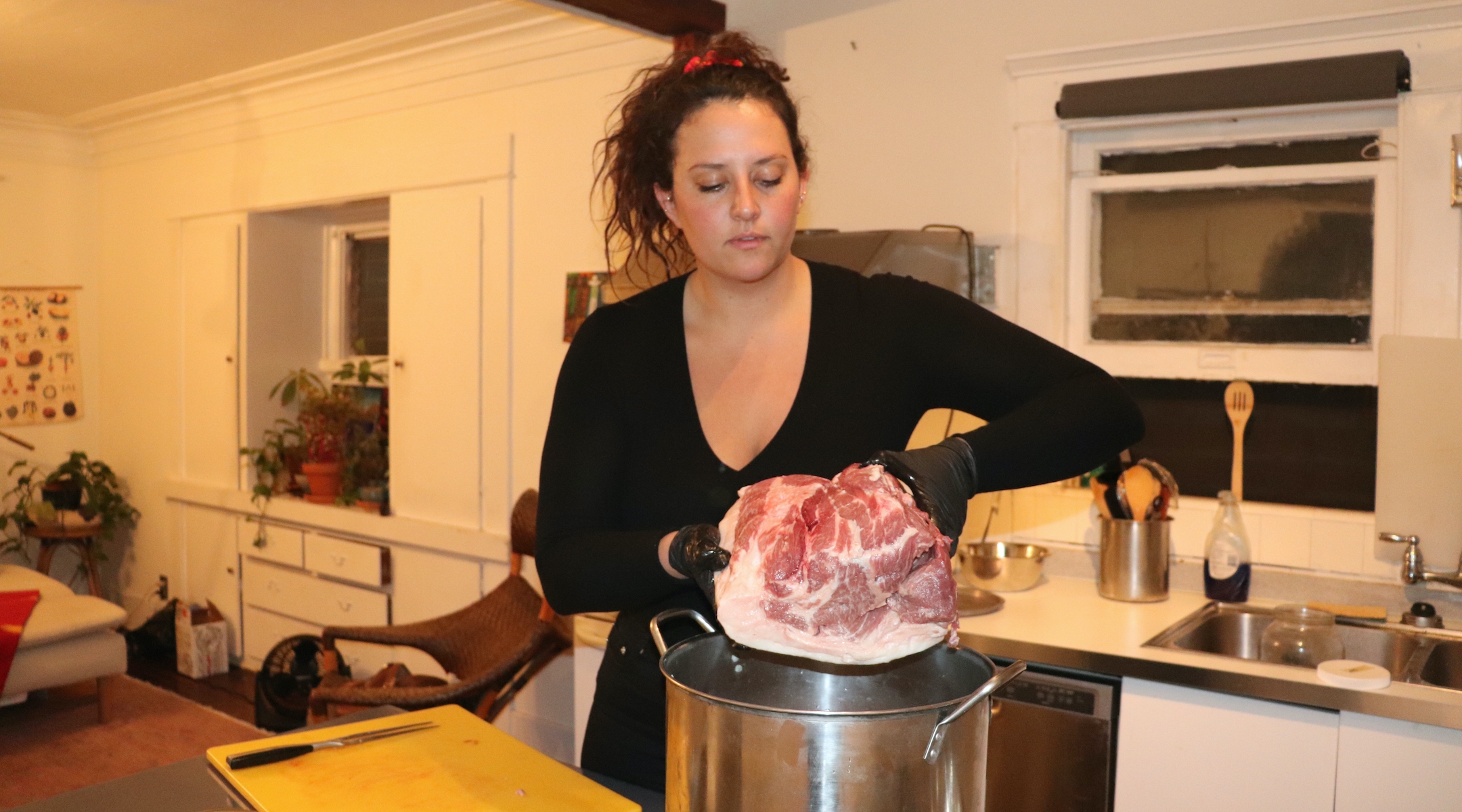 It takes 10 days for Rebecca King to brine the meat for her pork sandwiches. (Josefin Dolsten)
Advertisement

LOS ANGELES (JTA) — Pork. Just the word is enough to evoke a range of impassioned reactions from Jews — from seeing it as the ultimate taboo to a guilty pleasure.

But for Rebecca King, pork helps her feel connected to her Jewish identity. The 30-year-old Los Angeles-based chef and self-proclaimed “bad Jew” has built a business out of taking traditional Jewish deli sandwiches and turning them treif.

In December she launched The Bad Jew, which bills itself as a “A Very Unkosher Jewish Deli Popup,” selling homemade sandwiches from her backyard in the Little Armenia neighborhood. Since the pandemic hit, she has been selling to-go sandwiches and teamed up with local restaurants and bars to host socially distanced pop-ups several times a month.

People are gobbling it up, quite literally.

“A lot of people that are eating my food are Jewish also, so it does kind of make me feel close to the community in a way,” she told the Jewish Telegraphic Agency at a pre-pandemic interview over dinner at Crispy Pork Gang, a 24-hour Thai restaurant close to her home. “I’m not trying to go against the community. I’m just trying to serve people what I eat, what I like.”

One of King’s signature sandwiches is The Reubecca, a take on a Reuben featuring corned pork, Havarti cheese, Russian dressing and homemade fennel kraut on rye bread. There’s also The Danny Boy, named after fellow Jewish pork fan Danny Gordon of Los Angeles’ Flatpoint Barbecue, which features a treif version of pastrami that she calls “porkstrami.”

Making the meat is a labor-intensive effort that consists of brining as much as 70 pounds of pork per pop-up for 10 days. She pickles her own vegetables and ferments fennel.

“It tastes like Jewish barbecue,” King said as she munched on Thai sausage, one of her favorite pork dishes. “It’s hard to explain. When you feel like eating pork one day, call me.” 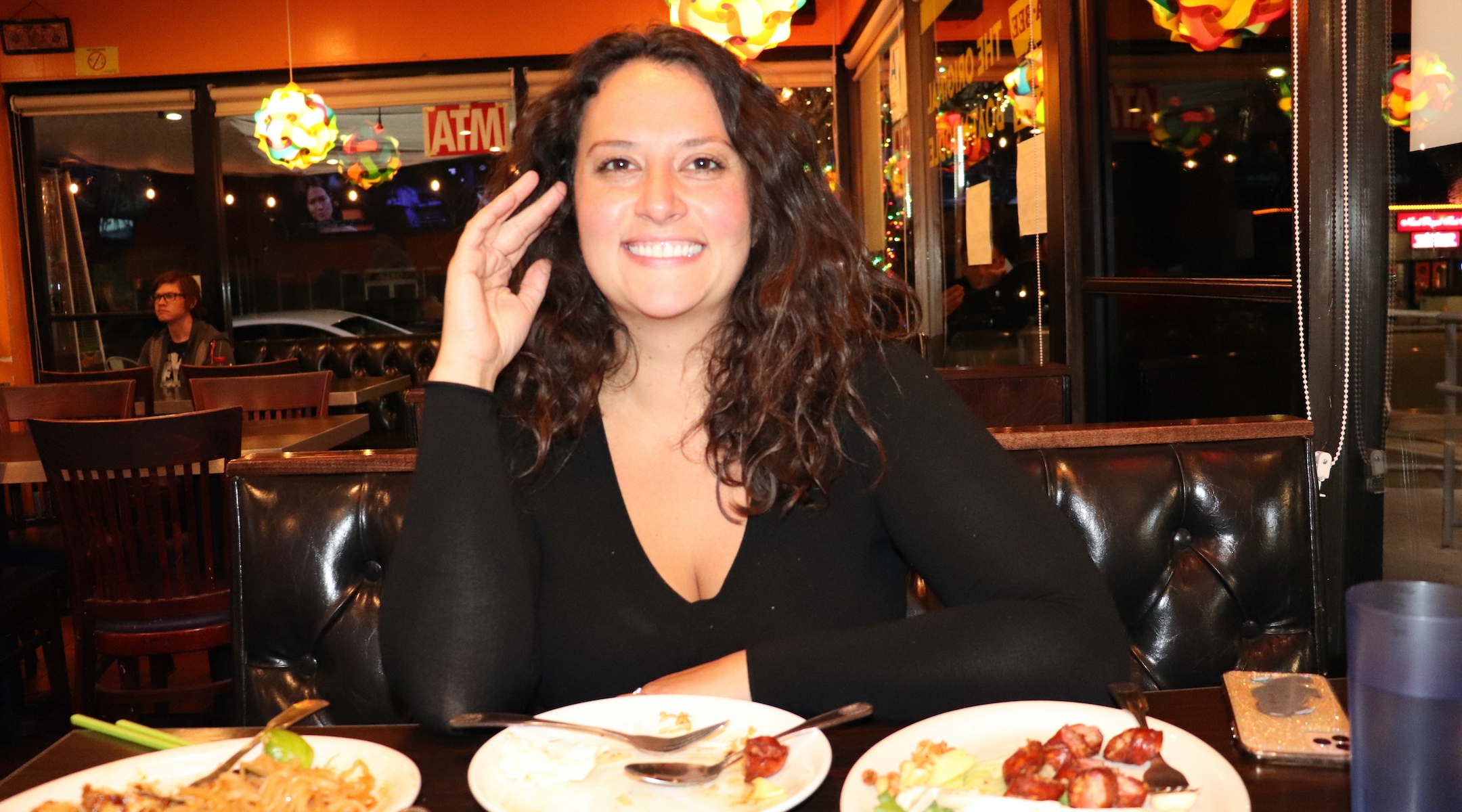 King isn’t the first one to come up with the idea of promoting a Jewish-influenced restaurant as nonkosher. In 2010, Jewish chef Jason Marcus opened up Traif in Brooklyn, where he serves up pork and shellfish-heavy dishes.

Like the vast majority of American Jews — 78% to be exact, according to a 2013 Pew survey — King’s family did not keep a kosher home. Growing up in Cleveland, King enjoyed visiting Corky and Lennys, an iconic Jewish deli owned by extended family. The deli serves ham alongside more traditional Jewish offerings like matzah ball soup, gefilte fish and latkes — a juxtaposition that also happened at King’s house.

“I think we even did Hanukkah ham one year,” she said.

It wasn’t until a few years ago that King, who also works as a real estate agent, decided to pursue food as a career after a restaurateur friend taught her how to make roasted chicken — and she turned out to be quite good at it. She started cooking for friends and throwing dinner parties. Eventually she started “staging,” working as an unpaid apprentice in restaurants in her free time. One of those restaurants was Gordon’s barbecue joint, and from there she got more into smoking and brining meats.

King realized she wanted to start a project of her own and looked to her Jewish background for inspiration. 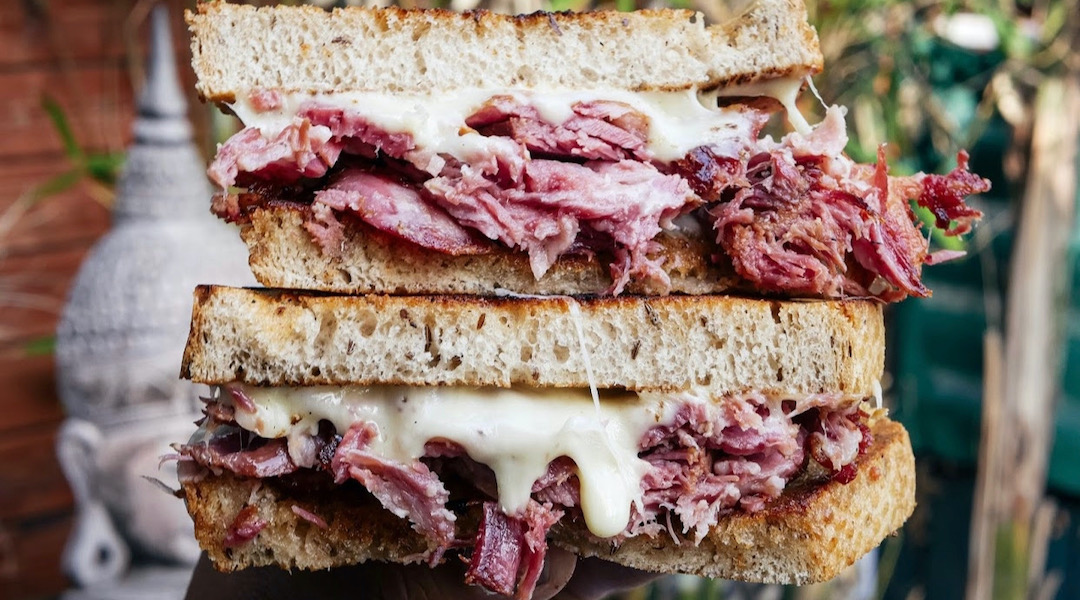 The Reubecca is a pork-heavy take on a Reuben sandwich. (Courtesy of King)

The goal is to one day sell her meats in stores across the country and open her own deli.

One person who hasn’t been quite as happy about The Bad Jew is her mom.

“My mom just doesn’t want me to offend anyone,” King said. “My dad passed away, but I think he would have been proud. He would have loved it. He was just like me — goofy, loud, sometimes said the wrong thing but always made up for it.”

King’s pop-up has earned rave reviews  — The Infatuation named it as one of Los Angeles’s top summer pop-ups and Beber Camp, the Jewish camp in Wisconsin that she attended and worked as a staffer, featured her work on its alumni page.

“I’ve always called myself a bad Jew because I love pork, and it’s just a joke,” she said. “And The Bad Jew, all it means is not-kosher deli sandwiches to me. I don’t think I’m a bad person — I love the Jewish community.”