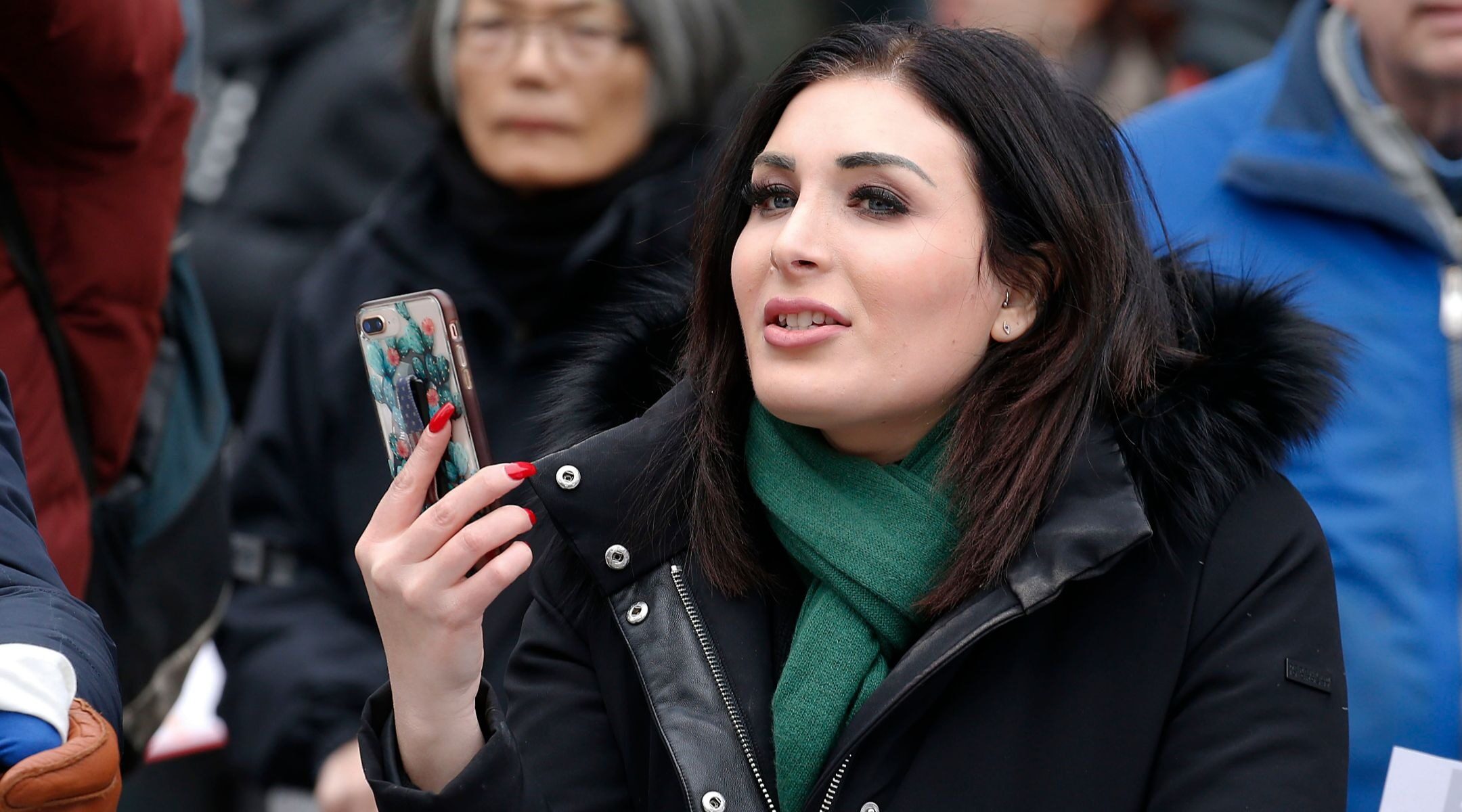 PALM BEACH, Fla. (JTA) — Lois Frankel does not want to pay attention to Laura Loomer — but acknowledges she has little choice.

“I really don’t want to give this person a platform that she doesn’t deserve,” says Frankel, an eight-year congresswoman from a South Florida congressional district that includes this affluent town, barely able to pronounce the name of her Republican opponent in November’s election. “She has a well-known track record of promoting bigotry.”

Loomer, a right-wing activist known for her incendiary rhetoric about Muslims and migrants, emerged from a field of six candidates in the Aug. 18 primary. President Donald Trump immediately endorsed her — in five tweets, unleashing the formidable fundraising machine that follows his every pronouncement. (Trump is, unhappily, Frankel’s District 21 constituent.)

Frankel says Loomer’s rhetoric not only is offensive on its face, it’s a potent fundraiser.

“That’s the issue with her, with her rhetoric, and her extremism, her bigotry, her linkage with Trump, she uses it to raise money,” Frankel told the Jewish Telegraphic Agency. “What does that mean for me? It means I’m running a full campaign. She did outraise me during the last few months.”

The looming Loomer-Frankel showdown also has meaning for American Jews, with two Jewish women squaring off in the country’s most Jewish district. One candidate is a paragon of the American Jewish community’s liberal majority, and one is a poster child for an angry right-wing minority long marginalized by the Jewish establishment.

Frankel’s weary resolve to face down Loomer is emblematic of the dilemma for the national Jewish community. Jewish leaders and politicians who would prefer to stick to the nuts-and-bolts social safety net and mainstream pro-Israel agenda that has defined Jewish political action for decades are dragged into Trump-era cultural wars.

Loomer has made this very much a Jewish campaign at a time when some Jews say the fear of a breakdown in order, as seen in rioting in Portland and elsewhere, is redoubling their commitment to vote for Trump. A video ad released this week calls Frankel “meshuggah” for praising Black Lives Matter, which Loomer falsely depicts in the ad as aligned with radical Islamists.

“We’re putting the Jews on trial here in District 21,” Loomer, a prohibitive underdog in the race, told the Jewish Telegraphic Agency. “They have a choice between a Republican Jew who is going to advocate for their survival in their best interests, or they can stand with self-hating Jew Lois Frankel, who is doing the bidding for the jihadists in the Democrat Party who are just literally walking Jews to the gas chamber.”

The district, which stretches along the coast from Delray Beach in the south to West Palm Beach, where Frankel was mayor for two terms, is tied for the most Jewish in the country — one quarter. (New York’s 10th, which covers parts of Manhattan and Brooklyn, has the same proportion of Jews.)

Alan Sherman, a rabbi who has lived and served in the area for decades, calls it a contest “between a young Jewish woman and an old Jewish woman, the future and the past.” Loomer is 27 and Frankel is 72.

Sherman, who says he backed Frankel when she was mayor, now supports Loomer.

Josephine Gon, the vice president of the Palm Beach County Jewish Community Relations Council, said Loomer at first was not widely known to be Jewish.

“This campaign is very reflective of the partisan nature of the election and society in general,” Gon said in an email. “Certainly for opponents of Loomer’s candidacy, the fact that she is Jewish is unsettling.”

Loomer in the past has declared herself to be an “Islamophobe” and celebrated the deaths of Muslim migrants in Europe. She has been banned from social media and the ride services Uber and Lyft for calling on them to ban Muslim drivers.

She and her campaign are quick to cite references to these episodes as evidence of liberal media bias. But Loomer also does not disavow her past acts.

“I find the word Islamophobe to be a little bit of an oxymoron right because, you know, phobia is defined as an irrational fear, and I don’t really think that it’s irrational for a Jewish woman to have concerns about Islam,” she said. “I mean, women are treated less than animals in Islam.” 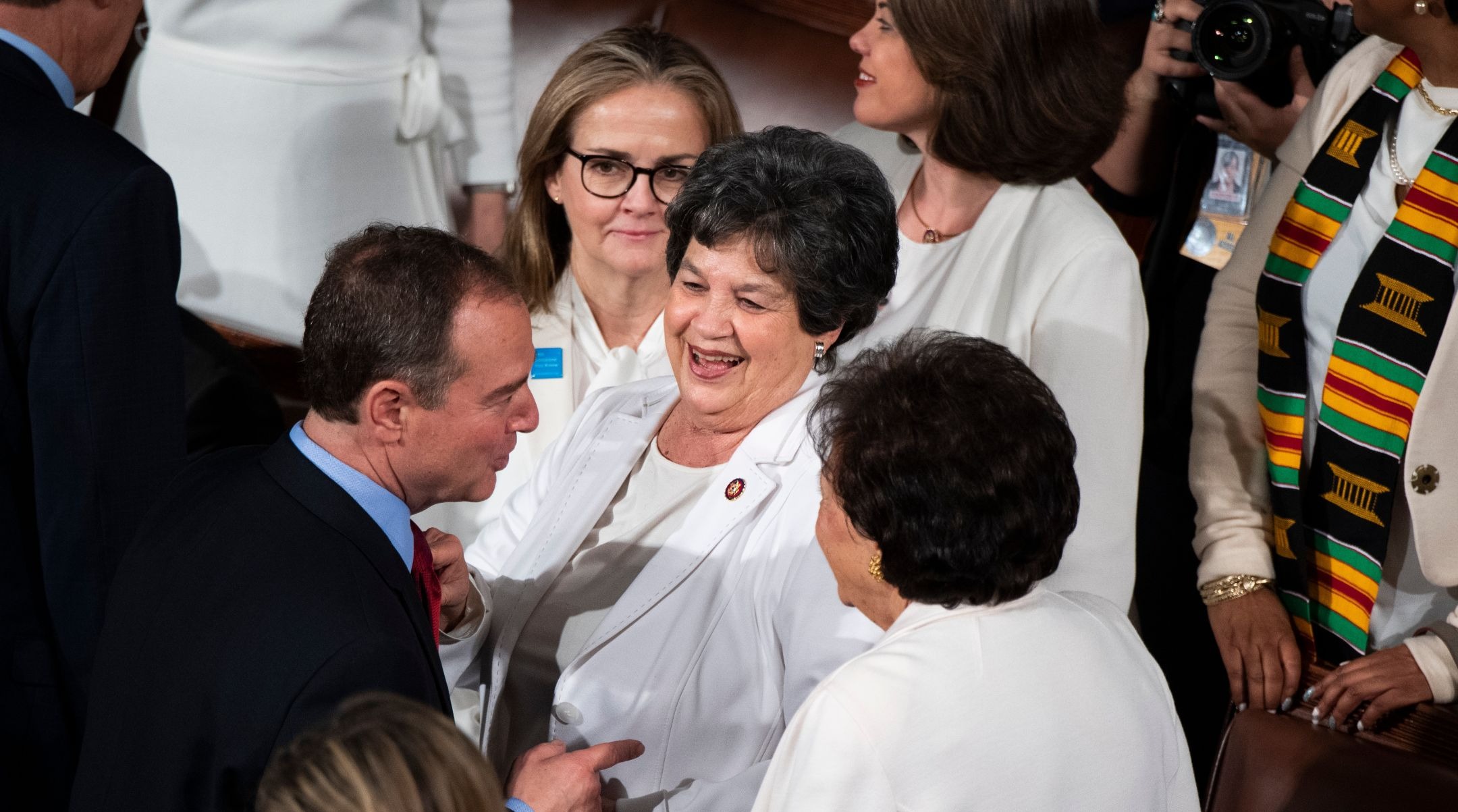 Frankel says she’d rather be talking about the issues that would typically preoccupy a South Florida campaign.

“We have a lot of seniors here,” she said. “They’re concerned about Medicare and Social Security. Florida is a hot spot for COVID.” Her constituents are, she said, “people, you know, who want to try to get their lives back and get back to work.”

Instead, Frankel realizes she must push back hard on the divisive rhetoric that Loomer is pressing in her campaign.

Here’s one Frankel fundraising pitch: “Lois is facing a hate-filled online conspiracy theorist this fall who has the support of Donald Trump, Trump’s family and Roger Stone,” a Trump confidant recently convicted for witness tampering and lying to investigators in Trump-related probes.

Loomer’s video ad this week, which invoked Holocaust imagery, drew outrage from legacy Jewish organizations. The Anti-Defamation League called it “disgusting,” while the American Jewish Committee said in a tweet, “If we are working on our Yiddish, Laura Loomer, this ad is a complete and utter shande,” or disgrace.

Even Sherman, the rabbi who backs Loomer, laughed when a reporter read him Loomer’s quote accusing Democrats of “literally walking Jews to the gas chamber,” then asked to hear it again. Sherman decried “inflammatory rhetoric” by both Loomer and Frankel, but said that Loomer also needed to grab attention in a heavily Democratic and Jewish district.

“She’s got a mountain to climb,” he said. “She’s got to get the attention of the community.”

Notably, just days after the ad’s release, Pro-Israel America, a nonpartisan political action committee launched by two former senior AIPAC officials, endorsed Frankel. The endorsement was notable because the PAC is known for assisting candidates who face challenges from rivals who are cool on Israel. Loomer, who calls herself a Zionist and attended the opening of the U.S. Embassy in Jerusalem while on a tour with a right-ring group, The United West, is staunchly pro-Israel.

The Republican Jewish Coalition also is not backing Loomer. Its director, Matt Brooks, declined comment, but the RJC in this election cycle vocally denounced some extremist Republicans. On Thursday, Loomer released a statement blasting the RJC for failing to endorse her, saying she is “ferociously pro-Israel.”

Loomer said she has drawn support from individual RJC board members, including Bernie Marcus, the Home Depot founder.

“They’ve been a bit quiet, haven’t they?” Loomer said of the RJC. “Perhaps they ought to live up to their name, Republican Jewish Coalition, and actually support Republican Jews running for Congress instead of just claiming they do.”

Standing up against a candidate enthusiastically endorsed by Trump is another matter. The district’s GOP is backing Loomer, and Trump’s daughter-in-law Lara campaigned for her last week. Heading into the primary, Loomer had the endorsement of one of the state’s leading Trump-adjacent Republicans, Rep. Matt Gaetz. Fans waved her posters at a pro-Trump rally in Palm Beach.

Her Jewish outreach director, Rotem Grossman, worked an enthusiastic crowd last week at a “unity and prayer” celebration at the Palm Beach Airport Hilton. A truck outside a ballroom rotated Trump posters, including several of Jesus embracing the Make America Great Again message, and a country band played inside.

“She’s a true Zionist,” Grossman said in an interview.”The real Zionism, which is the empowerment of the individual, which is really hand in hand with conservative constitutionalism. It’s the same exact thing.”

Loomer, acknowledging that she is running from behind, says she can win and describes an asymmetric tactic, forcing her opponent to do battle on the territory Loomer prefers. Asked about a range of issues affecting the district, she pivots to the national issues that have riven the country.

Questioned about the pandemic and the economic shutdown it has engendered, she skillfully segues into “law and order,” although the protests against police brutality that have engulfed other cities have barely registered in this district.

“You know, a lot of these issues are intertwined with each other,” she said of the pandemic. “You know we’re talking about law and order, that’s the No. 1 most important issue to voters here. Well, law and order has a lot to do with the dissipation of the patriotism and a lot of the civil unrest in our country right now. The radical left in this country is propping up domestic terrorist organizations.”

Loomer wants Frankel to explain her mentoring of freshman Rep. Ayanna Pressley of Massachusetts, one of “the Squad” of progressive lawmakers that also includes two House members who have endorsed boycotts of Israel. Frankel has made it a custom to shepherd through young congresswomen from the party’s left and more centrist wings in their first term.

Gon of the JCRC says the odds are against Loomer.

“Frankel has enjoyed extensive support in the community for quite a while as a representative and previously as mayor,” she said. “I don’t think Loomer can muster enough votes to defeat Frankel in this district.”

As of July 29, Loomer had outraised Frankel $1.16 million to $857,000, although Frankel, who has leftover cash from previous campaigns, has more funding on hand. The Cook Political Report, a nonpartisan newsletter that analyzes elections, does not list the district among its competitive races.

Still, Frankel is taking nothing for granted, even while conceding she was not fully into the campaign until now.

“I mean I got people dying here, out of work. I mean I really have to focus on my constituency — it’s not a complaint, that’s what I have to do, that’s what I was elected to do and that’s what I did,” she said. “I can assure you we will be running a full-blast campaign.”