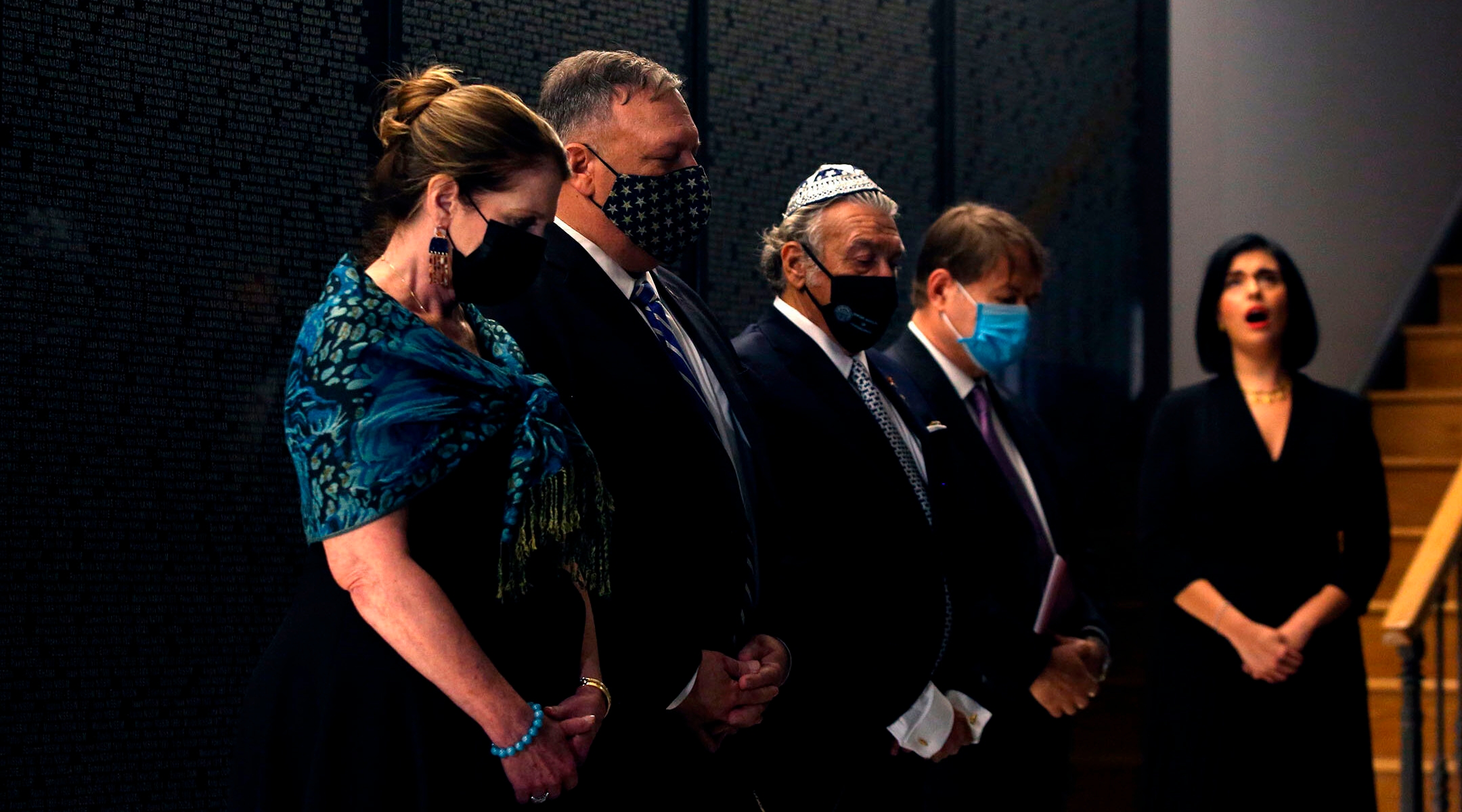 (JTA) — Any other day of the year would have been easier for the head rabbi of Thessaloniki, Greece, to welcome Mike Pompeo for a visit.

The U.S. Secretary of State’s schedule for a whirlwind tour of southern Europe this week left only Monday open, which happened to be Yom Kippur, the holiest day on the Jewish calendar. But for Thessaloniki’s head rabbi Rabbi Aharon Israel, the opportunity was too important to pass up.

Thessaloniki’s Jews have for decades lobbied for greater recognition of their community’s Holocaust tragedy, which many feel is relatively unknown despite its monumental scale. The city’s Jewish population went from over 55,000 to 2,000 during World War II.

A visit from a high-profile U.S. leader helps amplify the narrative.

“It was a dilemma, because the immediate reaction to such a request is: ‘Sorry, we can’t do it,’” said Israel, an Israeli who has been serving in Thessaloniki for about seven years. “I can’t say I embraced this visit with both hands. I consulted other rabbis and came to the conclusion we should not say no.”

The visit by Pompeo and his wife Susan lasted only about 20 minutes. The Pompeos were given a tour of the small Thessaloniki Jewish museum, and while there were no speeches, the event ended with a soprano performing a liturgical song in Ladino with verses from Psalm 22, a lamentation that begins with the words: “My God, my God, why hast thou forsaken me.”

Orthodox Jewish law forbids Jews from undertaking any labor on Yom Kippur, even carrying objects. It is a day of introspection and reverence that is incompatible with both the logistics and atmosphere of a state visit, Israel admitted.

In the end, Israel said the event occurred during a break in the community’s Yom Kippur prayers and resulted in no violations to Jewish law. The U.S. embassy in Athens had originally asked if Pompeo could visit the local synagogue, but that would have been too much of a disturbance, Israel said, so they diverted the visit to the museum.

“I could see Secretary Pompeo was deeply moved by the event, and we in turn were moved by the fact that it was obviously important for him to visit the community,” he said.

A State Department official told JTA that the event was at the community’s invitation.

“Secretary Pompeo recognized the Holiest Day of the Jewish year together with the leaders of the Jewish Community of Greece at their invitation,” the spokeswoman said.

“A soprano sang a liturgical song in Ladino in the museum’s Hall of Names, commemorating both the rich history of this Sephardic Jewish community as well as the horror of the loss of 94 percent of the Jewish population of Thessaloniki in the Holocaust,” she said. “The event also honored the memory of Jews who were persecuted through the millenia, as well as Thessaloniki’s Jews who were systematically rounded-up and deported by the Nazis to the Auschwitz-Birkenau death camps was appropriately commemorated as well.”

Refusing Pompeo would have raised the possibility of offending the Trump administration, which has earned high praise from many in the Greek Jewish community for a series of pro-Israel diplomatic moves, including recognizing Jerusalem as the country’s capital.

“Secretary Pompeo knows all about Yom Kippur and yet if we would have passed up the opportunity to visit him after everything he’s done for the Jewish people and Israel, I believe he would have been offended in some place,” Israel said.

Before the war, Thessaloniki’s population was almost one-third Jewish. The city, including parts of its iconic port, shut down on Jewish holidays and the weekly Sabbath. It was a hub for Jewish commerce, scholarly activity, labor and philosophy. But the community was wiped out ruthlessly and speedily in 1943.

“For decades, there was an attitude in the city, including by mayors, to pretend like this never existed. Like this was something they wanted erased from the city’s history,” said Larry Sefiha, the vice president of the Jewish Community of Thessaloniki, a nonprofit that represents the 1,200-odd Jews who live in Thessaloniki today.

It made the city more introverted, and it meant that the catastrophe of Thessaloniki was far less known than places like Babyn Yar, although it was just as bloody, he said.

Only three years ago, David Saltiel, the president of the Jewish Community of Thessaloniki, finally succeeded in his years-long lobbying effort to get Aristotle University of Thessaloniki to construct a monument acknowledging the fact that the school was partly built on a Jewish cemetery that was razed during the Holocaust.

The monument was one of several gestures led by Yiannis Boutaris, the previous mayor of Thessaloniki, who local Jews hold in high esteem for his efforts to commemorate the Holocaust and the city’s Jewish history.

Israel pointed out that visits by people of Pompeo’s caliber are rare in Thessaloniki. In 2013, a sitting Greek prime minister became the first in over a century to visit the city’s synagogue.

Rabbi Yoel Kaplan, the emissary to Thessaloniki of the Chabad Hasidic movement, declined to comment on the Yom Kippur event except to say: “I wasn’t there because I was at synagogue all day.”

Victor Eliezer, secretary-general of the Central Board of Jewish Communities in Greece, said the event had a historical justification.

“To tell people about the souls that were murdered here is to help rescue their souls,” Eliezer said. “That’s worth the inconvenience.”