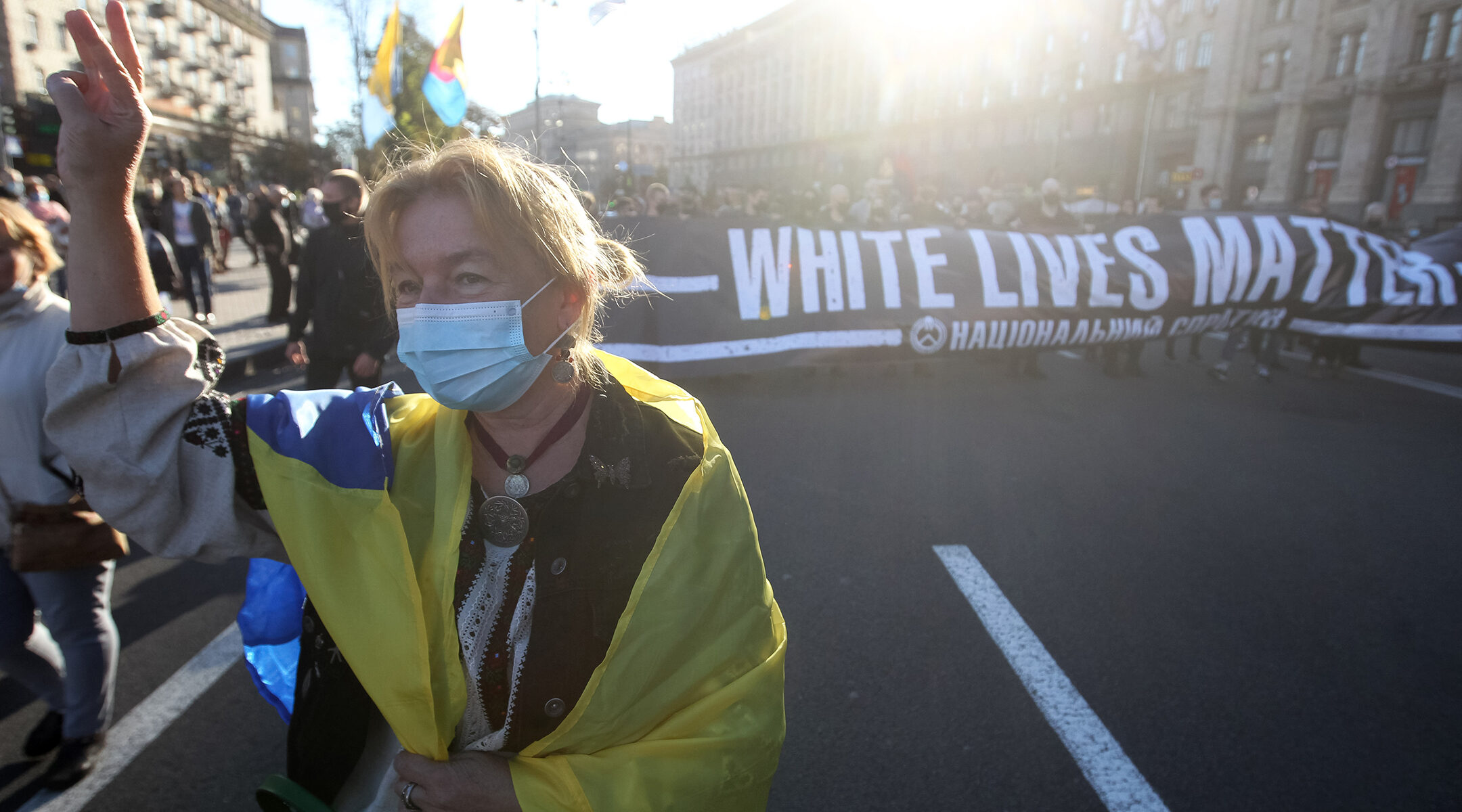 A woman wearing a Ukrainian flag makes an ultranationalist gesture at an event honoring Nazi collaborators in Kyiv, Ukraine on Oct. 14, 2020. (STR/NurPhoto via Getty Images)
Advertisement

(JTA) — Participants in a nationalist march in Ukraine raised a banner decrying the country’s “occupation and robbery” by a “Jewish clan.”

The banner, aimed at Ukraine’s Jewish president, Vlodymyr Zelensky, appeared Wednesday at the annual OUN-UPA March, which is named for Ukrainian nationalist movements that for a time sided with Adolf Hitler against the Soviet Union.

“Celebrating the anniversary of the occupation and robbery of Ukraine by the Dnipro Jewish clan of Vova Zelensky,” the read the billboard-sized banner that was displayed in front of Zelensky’s office.

Zelensky, who was elected last year, has implicitly criticized the glorification of wartime collaborators, telling the Times of Israel earlier this year that it would be better to name monuments and streets in the country after people “whose names do not provoke conflict.” Dnipro is a city in eastern Ukraine with a large Jewish community.

Mikhail Tkach, executive director of the United Jewish Community of Ukraine, said the banner was an act of incitement and called on authorities to punish those responsible for it.

Other symbols on display at the march included the logo of the ultranationalist Azov Battalion and a banner that read “White Lives Matter.”

Separately, Kyiv’s department of culture sent a letter to a prominent rabbi in Kyiv asking him to hold prayers for “defenders of Ukraine of all generations” on Oct. 14. That date is a national holiday known as both Defender of Ukraine Day and the Day of the Cossacks, a Slavic group that perpetrated pogroms against Jews in the early 20th century. Many Ukrainian Jews objected to the establishment of Oct. 14 as a national holiday in 2015.

Eduard Dolinsky, director of the Ukrainian Jewish Committee, criticized the letter, which was apparently sent to multiple clergymen, calling in “bizarre.”

Dolinsky said the reference to “all generations” meant the city was asking Jews to pray for Bogdan Khmelnitsky, the 17th-century Cossak leader whose army killed countless Jews, as well as 20th century Nazi collaborators.

It is reminiscent “of Soviet times when the party bureaucrats instructed working collectives how to celebrate the Bolshevik revolution,” Dolinsky told the Jewish Telegraphic Agency.