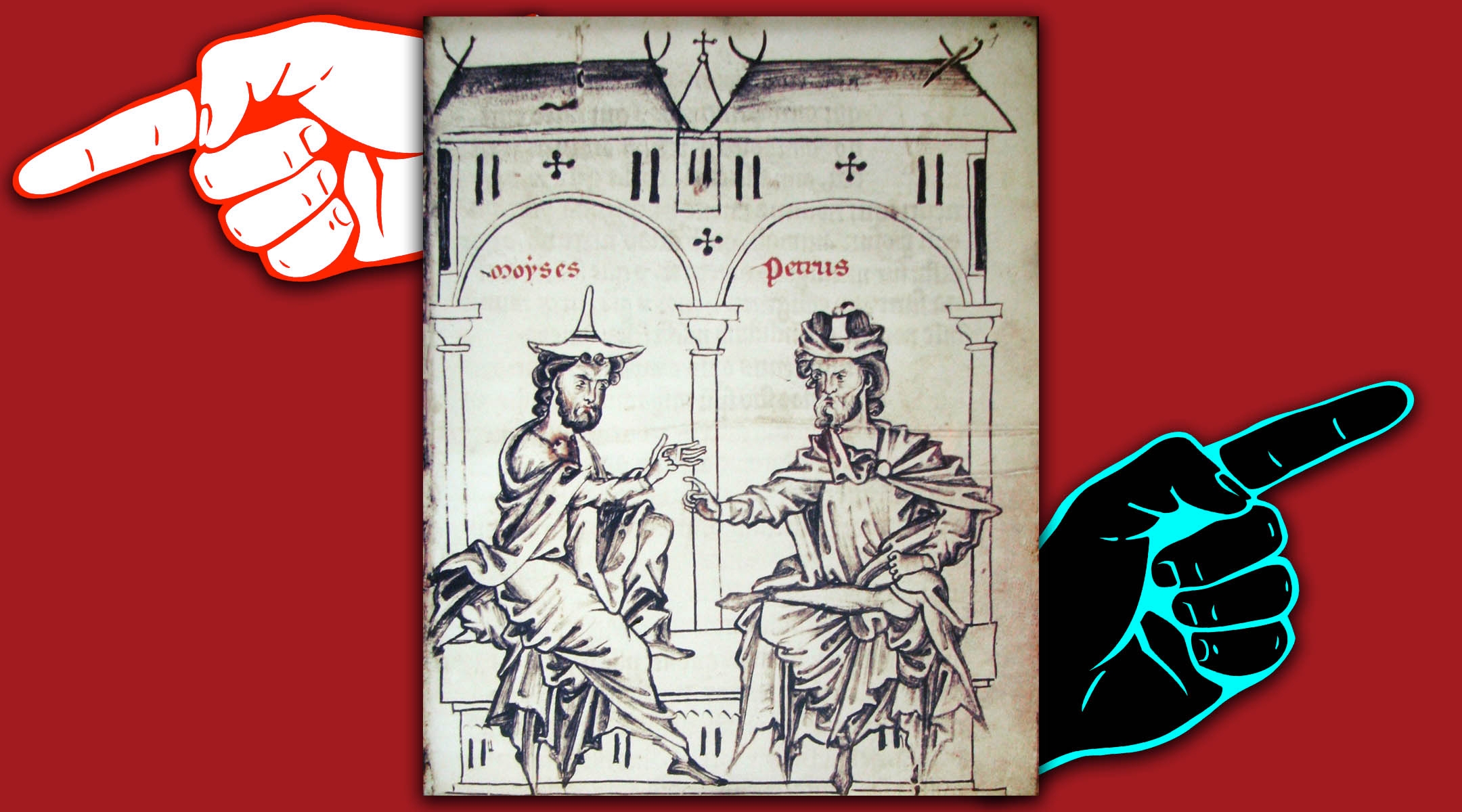 A 13th century Belgian Manuscript illustrating the dialogue between the jew "Moyses" and the Christian "Petrus." (Public Domain/JTA Montage)
Advertisement

(JTA) — The intermediate days of Sukkot in the holy city of Brooklyn are normally a time of singing, prayer and communal fellowship. This year the celebrations were marred by violence.

Egged on by a rabble-rousing individual who literally wore a political bumper sticker on his chest, a crowd of angry haredi Orthodox Jews protested coronavirus restrictions, burning masks and denouncing government authorities. Police, wary of this summer’s Black Lives Matter protests but unaccustomed to angry mobs of Hasidim in their Yom Tov finery, were unprepared for the melee.

Scenes of the demonstrations were widely circulated on social media, including sporadic episodes of shameful violence. In one notorious bit of cellphone footage, a Yiddish-inflected curse was repeatedly thrown at Jacob Kornbluh, a Hasidic reporter for Jewish Insider. With his back to a wall and surrounded by Hasidim, the threatening crowd chanted “moser, moser, moser!” as jarring, festive holiday music blared incongruously in the background. Barely protected by a handful of police officers, Kornbluh fled the scene, chased away by a surging mass of kaftans and stiff-brimmed black hats.

What, exactly, is a moser? The term “snitch” was also thrown at the hapless writer, but the translation doesn’t come close.

Moser (also pronounced “moiser”) literally means “one who hands over,” in the sense of one who informs or turns over a Jew to the secular authorities. The term is laden with portent in Jewish law: roughly parallel to a rodef (“pursuer”), a moser is worthy of the death penalty.

Maimonides wrote in the 12th century that “an informer may be slain anywhere, even at the present time when Jewish courts do not try capital cases. It is permissible to slay him before he has informed…. it is a religious duty to slay him; whoever hastens to kill him attains merit.” There should be no misunderstanding here: Maimonides was writing in a particular social context, prevalent for much of the past two millennia, when Jews constituted a tiny Diasporic minority subject to the whim of often hostile, capricious and brutal governments.

Halachic authorities like Rabbi Herschel Schachter, head of school at Yeshiva University’s REITS seminary, have been quick to declare that this law does not apply in modern, democratic societies: Reporting criminal behavior to police, or even tax evasion to the IRS, does not make one a hated “moser.” Maimonides’ ruling is more comprehensible in the context of Nazi Germany, Saddam Hussein’s Iraq or perhaps Stalin’s Russia. The distinction between “informant” and “slanderer” is unimportant — the simple act of delivering a fellow Jew into the hands of an anti-Semitic autocratic regime is a crime in and of itself.

Jewish history is unfortunately well-populated with contemptible individuals who seek self-promotion by slandering the Jewish community in more public forums. From Nicholas Donin in the 13th century, who initiated literally centuries of anti-Semitic fodder when he denounced the Talmud before Pope Gregory IX, to Jacob Brafman, whose salacious 1869 “Book of the Kahal” outlined anti-Jewish themes that would be exploited by the Protocols of the Elders of Zion and even Hitler himself, there have always been Jews whose personal careers were built on putative, tendentious “exposes” of Jewish society.

No wonder the term “moser” is perhaps the most hated epithet one can apply to a Jew — part traitor, part informant, wholly despicable.

But it is hard to understand the ugly events of Brooklyn last week in terms that would even approach the threshold of rendering anyone a moser. The actions of the state — in this case, New York City Mayor Bill de Blasio and New York Gov Andrew Cuomo — were clearly motivated by a desire to protect the Hasidic community, and the broader population, from a deadly virus that took the lives of tens of thousands of New Yorkers this spring. Their imposition of the New Cluster Action Initiative threatened economic, social and religious hardships for certain neighborhoods in Brooklyn and Queens (including, incidentally, my own), but only the most extreme opponents of the measure would argue it was more than heavy-handed governance.

Even those who argue that the government measures are draconian and unnecessary would find it hard to justify the unlawful, physical attack on fellow Jews.

If anything, the historical precedent was closer to that of early 19th century Russia, when Tsarist authorities imposed a major reform of the Jewish educational system. Liberal Enlightenment–oriented Jews like Max Lilienthal were convinced at the Tsar’s sincerity and supported the effort to bring the Jews into the modern era. Appointed a special advisor in Count Uvarov’s Ministry of Education, Lilienthal nevertheless faced withering opposition from traditionalist Jews who saw the plan as a thinly veiled attempt to convert Russia’s Jews to Christianity (they were not entirely wrong). Within five years, Lilienthal resigned his position and moved to Germany and then Cincinnati, where he served as a rabbi of a Reform congregation.

By the turn of the 21st century, the slur of “moser” served primarily as a rallying cry and justification for those who intend extrajudicial violence and seek to silence legitimate opposition. When Yigal Amir, for example, gunned down Israeli Prime Minister Yitzhak Rabin in 1995, he called Rabin a moser for his peace efforts with the Palestinians. It’s used as a tool of intimidation against victims of sexual abuse who may be tempted to report their abusers to the authorities.

Branding a Jew as a moser is, historically speaking, a dangerous charge with horrific, real-world implications. A crowd recklessly chanting “moser, moser, moser” is terrifying, especially in our era of cell phones, social media and WhatsApp.

Yitzchok Kornbluh, father of the journalist under attack, painfully noted the life-threatening implications observed that the irresponsible application of the term moser is literally life-threatening: “All you need is one crazed person to take that “Mitzva” on board,” he wrote, ending with the Hebrew phrase “chas ve’sholom,” Heaven forbid.