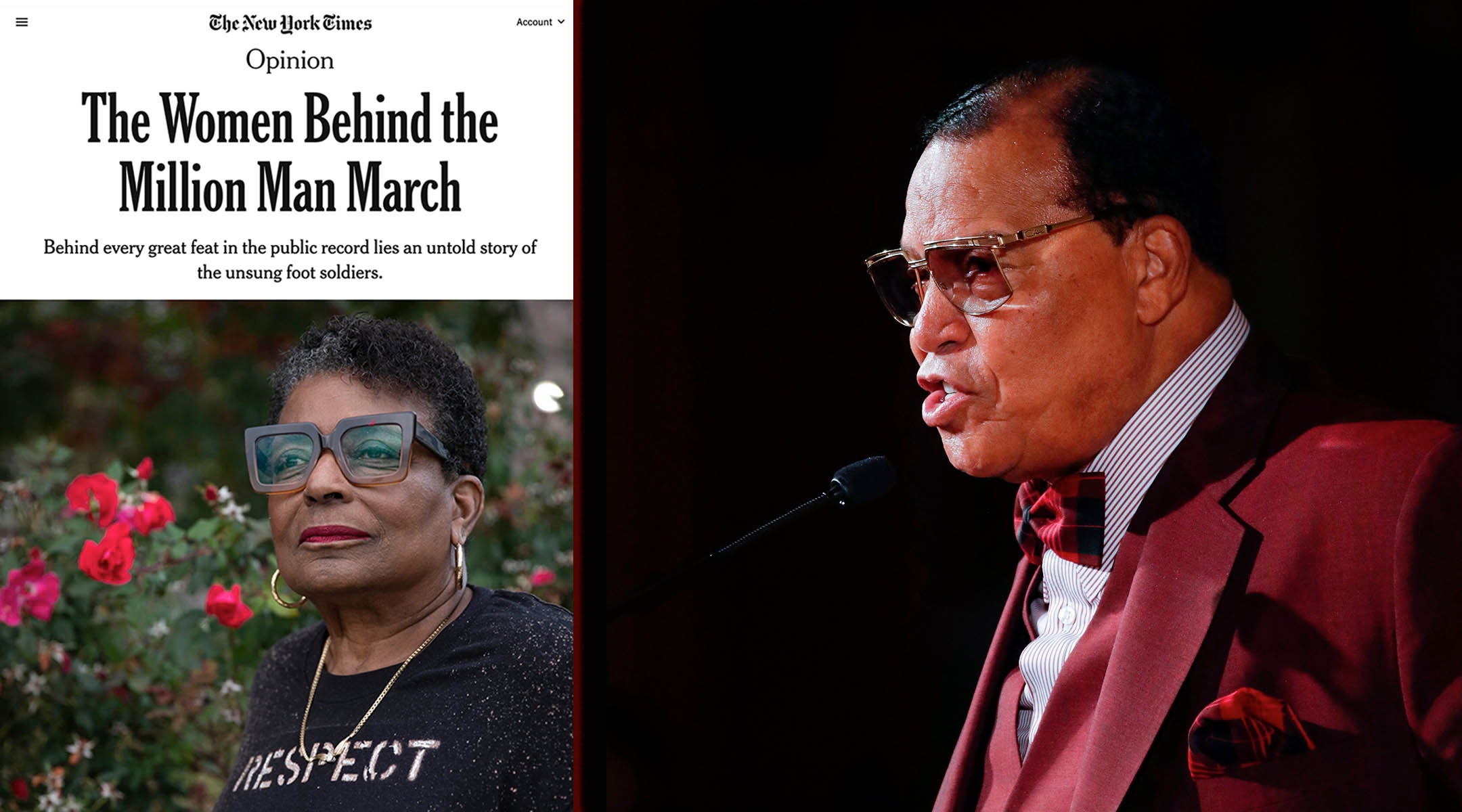 (JTA) — Like many others, I quickly saw that something important was missing from the New York Times op-ed this week about the 25th anniversary of the Million Man March.

The piece, by Natalie Hopkinson, a professor at Howard University, highlighted the behind-the-scenes roles played by Black women like Cora Masters Barry and Betty Shabazz, the widow of Malcolm X. As the piece notes, hundreds of thousands of previously unregistered Black men were registered to vote, thanks largely to the tireless efforts of Barry and others.

But while the piece achieved its goal of rewriting the Million Man March story to include new voices, it also contained a shocking omission. It fails to mention — or even scratch the surface of — the serial bigotry of the march’s main organizer: Louis Farrakhan, the longtime leader of the Nation of Islam.

The op-ed does note that Farrakhan needed the help of Barry and other women to massage his messaging around the march, which was viewed, as the writer points out, as “exclusionary and sexist.” And while that may be true, it does not even begin to qualify as a passing glance at the record of bigotry that belongs to Farrakhan, the anti-Semitic leader of the Nation of Islam.

If you were to only read Hopkinson’s account of Farrakhan and the 1995 march, you most likely would walk away with a lukewarm impression of the man. But as with any narrative around a monumental historical event or person, it is necessary — at minimum — to be willing to acknowledge the significant negative or uncomfortable aspects surrounding such leaders, so readers are able to glean a clearer picture of what is true. This is where Hopkinson, and The New York Times, dropped the ball completely.

So let’s set the record straight.

Louis Farrakhan, who is 87 years old, has been trafficking in hate, anti-Semitism, homophobia, racism and misogyny since long before the Million Man March in 1995 and continues to do so today.

In February of 1995, eight months prior to the march, Farrakhan suggested that it was Jews who got America into World War II and that “international bankers,” an anti-Semitic dog whistle, financed both sides of the war effort.

In recent years, Farrakhan has embarked on a wide-ranging campaign specifically targeting the Jewish community, a campaign that has featured some of the most hateful speeches of his tenure as head of the Nation of Islam.

He has alleged that Jews are messengers from Satan, sent to attack the messiah. He has stated that the Jewish people were responsible for the slave trade and that they conspire to control the government, the media and Hollywood, as well as various black individuals and organizations. He has likened Jews to vermin and termites, using the kind of dehumanizing slander pioneered by Nazi Germany. Indeed, in an October 2018 speech marking the 23rd anniversary of the Million Man March, Farrakhan told his followers, “When they talk about Farrakhan, call me a hater, you know how they do — call me an anti-Semite. Stop it, I’m anti-termite!”

Farrakhan does not limit his bigotry to Jewish people. He has referred to the LGBTQ+ community as “degenerative crap,” described homosexuality as having been created by Satan and used scripture to justify the demonization of gay and lesbian people. In 2009 he said, “You think you know Jesus Christ?… If you knew him, why is there so much drunkenness, so much drugs, so much fornication, so much adultery, so much homosexuality, so much lesbianism, so much murder, so much crime?”

There are plenty more examples of Farrakhan’s bigotry, and they are not hard to find.

Even as we still mourn the late civil rights icon Rep. John Lewis, we should remember that Lewis declined the opportunity to speak at the march. He wrote in Newsweek that he could not “overlook past statements by Louis Farrakhan — and others associated with the Nation of Islam – which are divisive and bigoted.” Lewis said that the march was “fatally undermined by its chief sponsor.”

In running this piece, the Times is guilty of the sin of omission. It failed to make clear that Farrakhan is an avowed bigot, one who may draw applause in some quarters but who has been rejected in mainstream circles for decades because of his unapologetic prejudice. Running this piece without any mention of his history only further legitimizes an anti-Semite and hateful figure. In short, excusing his intolerance by overlooking it makes it more acceptable for other leaders to hold such dangerous views.

We can speak fondly of, remember and celebrate landmark historical moments. But it is irresponsible and inexcusable to ignore hatred hiding in plain sight, particularly considering the context. As The New York Times itself has reported, anti-Semitic incidents surged in 2019, reaching a 40-year high. And the tri-state area from which the New York Times draws its legitimacy experienced some of the worst anti-Jewish acts in recent memory, including a wave of assaults in Brooklyn; a shooting in Jersey City, New Jersey, that left three people dead in a kosher supermarket, and a stabbing in Monsey, New York, that injured four and left a rabbi in a coma who later succumbed to his wounds.

Every day, we witness attempts to rewrite, revise or soften the most difficult aspects of American history. In recent years, The New York Times admirably has sought to use its platform and voice to right these wrongs. And yet that is why this op-ed, one that falls so dramatically short of their own standards, demands not just a robust correction but an internal investigation to ensure it never happens again.