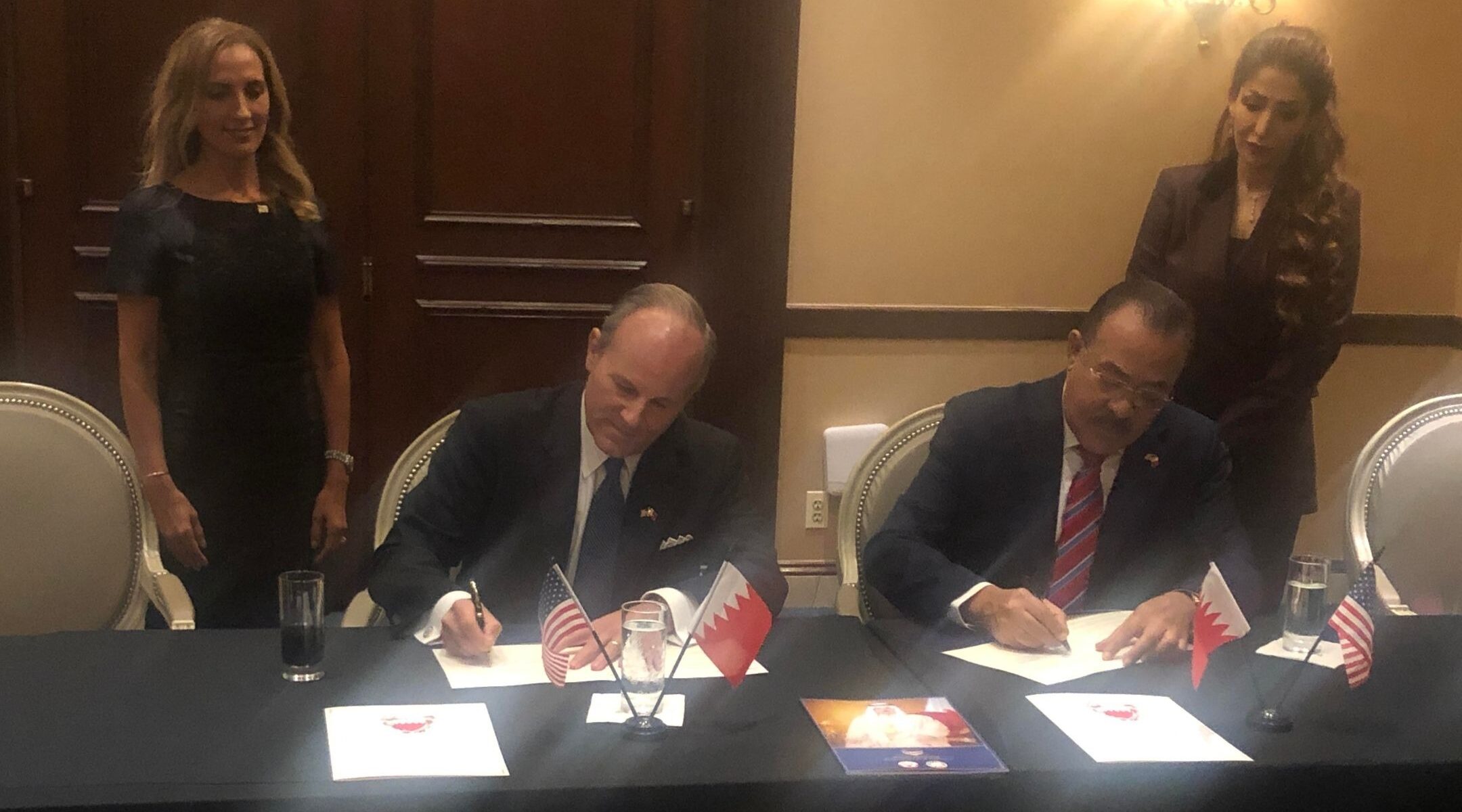 WASHINGTON (JTA) — A Bahraini institute has signed an agreement with the US State Department to combat anti-Semitism, anti-Zionism and delegitimization of Israel.

The memorandum of understanding, signed Thursday in Washington, D.C., marks the first time an Arab country has embraced a key Trump administration agenda item, to get countries to include anti-Zionism and some forms of harsh criticism of Israel in their definitions of anti-Semitism. It comes as the Trump administration has in recent weeks brokered a series of normalization agreements between Israel and the United Arab Emirates, Bahrain and Sudan.

It was signed at a ceremony in a downtown Washington hotel by Elan Carr, the State Department’s anti-Semitism monitor, and Shaikh Khalid bin Khalifa Al Khalifa, a member of Bahrain’s extended royal family who is the chairman of the King Hamad Global Centre for Peaceful Coexistence.

“We all know that hatred is the enemy of peace,” Khalifa said at the signing ceremony.

The memorandum of understanding says the sides “intend to work together to share and promote best practices for combating all forms of anti-Semitism, including anti-Zionism and delegitimization of the State of Israel.”

It also accepts the definition of anti-Semitism of the International Holocaust Remembrance Alliance, which includes double standards in criticizing Israel, denying Israel’s right to exist as a Jewish state, and comparing Israeli actions to the Nazis. Some civil liberties groups in the United States and abroad say the definition is too broad and, when adopted as part of enforceable law, inhibits speech freedoms.

The agreement signed Thursday is well short of the legislative adoption of the IHRA definition that the Trump administration has sought from countries, and that has been adopted by a number of US state governments, with the backing of some pro-Israel organizations. The Bahrain memorandum outlines only educational programs and does not include enforcement language.

The institute that al Khalifa runs, which mostly builds goodwill with other faiths and nations, does not appear to be connected to any Bahraini body that would enforce the definition.

Still, the significance of a Muslim Arab country that not long ago would not formally recognize Israel now signaling its willingness to educate its population about the value of a Jewish state was not lost on Carr, who is of Iraqi Jewish origin, or his deputy, Ellie Cohanim, who was born in Iran.

“As a child, I had to flee my homeland of Iran with my family to escape the Islamic revolution of 1979 that brought into power this despotic regime which to this day oppresses the people of Iran with the most appalling human rights record,” Cohanim said at the signing ceremony. “My story is the story of almost 1 million Jews, all indigenous to the Middle East, all who love their homelands.”

Carr also described the longing Jews for Arab lands feel for their homelands. “I come from a heritage that lived for millennia, with Arabs and with Muslims and flourished in the Middle East,” he said. “We who come from that region, understand that there were wonderful periods, not only of tolerance but of true affection.”

Some 44 parliaments or governments have adopted the IHRA definition, most recently on Thursday Albania, a secular nation with a Muslim majority.