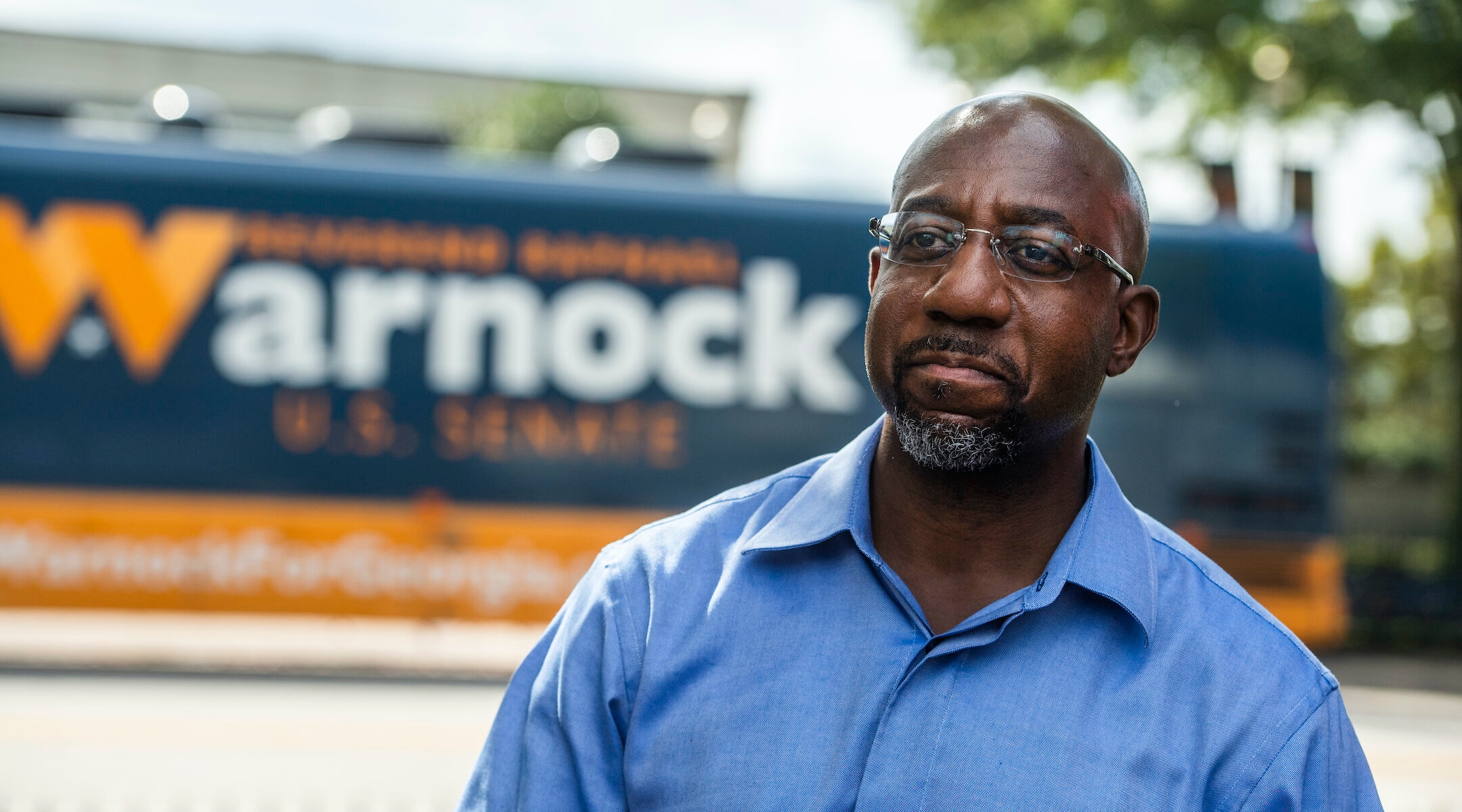 (JTA) — Almost as soon as it became clear that control of the U.S. Senate would be decided by two runoff elections in Georgia, scrutiny landed on the Israel record of Raphael Warnock, the Democrat seeking to unseat Republican Sen. Kelly Loeffler.

The publication followed up with another story this week saying that Warnock, a Black pastor who leads the church helmed by the Rev. Martin Luther King Jr. until his assassination in 1968, “blasted Israel” in a 2018 sermon.

On Monday, Loeffler amplified that sermon on Twitter, accusing Warnock of having “a long history of anti-Israel extremism.”

The headlines and Loeffler’s charge, if true, would put Warnock in the far-left wing of the Democratic Party — not an advantageous position for someone seeking to peel off a Republican-held Senate seat in a purple state. They could cost him support from Jewish and evangelical Christian voters for whom Israel is an important issue at the ballot box.

But Warnock says he is a staunch supporter of Israel, and Jewish Democrats in Georgia and beyond say they are unconcerned by the letter and sermon and are eager to see him in Congress.

“He has been a friend to Atlanta’s Jewish community throughout his tenure at the Ebenezer Baptist Church and a regular speaker and visitor to Atlanta’s synagogues,” Valerie Habif and Joanie Shubin, who founded Jewish Democratic Women’s Salon, Atlanta, an activist group that helps elect Democrats in Georgia, said in a statement. “His support for Israel is unequivocal.”

Warnock delivered the sermon in question in May 2018, the week that Trump moved the U.S. Embassy in Israel to Jerusalem in a move that he later said was meant to please his evangelical supporters. In the sermon, he described seeing Palestinian protesters face reprisals from Israeli soldiers.

“We need a two-state solution where all of God’s children can live together,” Warnock said. “We saw the government of Israel shoot down unarmed Palestinian sisters and brothers like birds of prey. … It is wrong to shoot down God’s children like they don’t matter at all. And it’s no more anti-Semitic for me to say that than it is anti-white for me to say that Black lives matter. Palestinian lives matter.”

The following year, Warnock visited Israel and Palestinian areas as part of a delegation of Black clergy from the United States and South Africa. After their trip, the 18 religious leaders penned an open letter about their experiences with a wide range of takeaways, including a renewed commitment to “a two-state solution in which a safe and secure State of Israel will reside next to a safe, secure, viable, and contiguous State of Palestine.”

The letter also decries “the conditions in which Palestinian communities live” and says that “the heavy militarization of the West Bank” was “reminiscent” of the way apartheid South Africa governed Namibia, its colony.

The letter lays blame for the situation at both divisions among Palestinian political leaders and “Israeli powers that be,” and expresses sadness over the “hardening of the hearts” of Israeli leaders.

“We pray for the soonest arrival of the day when Jerusalem will be the capital of both a Palestinian and an Israeli State at peace with one another, for a blessing for all Abrahamic faiths,” the letter says.

Warnock’s campaign told the Jewish Telegraphic Agency he was unavailable for an interview this week. But in a letter provided to Jewish Insider, Warnock said his views were being misrepresented for political reasons.

“Claims that I believe Israel is an apartheid state are patently false — I do not believe that,” he wrote.

The open letter Warnock signed called for an end to arms sales to all parties in the region. But in his Jewish Insider piece Warnock said he supports President Barack Obama’s historic pledge of a record $38 billion in security aid to Israel and agrees with President-elect Joe Biden that the U.S. should not condition security aid to Israel over policy disagreements, something that an increasing number of progressive Democrats have said is appropriate. He also said that he opposes the movement to boycott Israel, which a handful of Democratic congresswomen have said they support but which the vast majority of lawmakers have rejected.

Warnock added that as the senior pastor of Ebenezer Baptist Church for 15 years, he has been proud to continue King’s “legacy of leadership and friendship between the Black and Jewish communities of Atlanta.” He noted that his seminary thesis was about King and Dietrich Bonhoeffer, the Christian theologian who resisted Hitler and was murdered by Nazis.

Israel policy has not been central to Warnock’s campaign, which has focused on issues related to equity and justice in the United States. He has spoken about the importance of Black-Jewish collaboration in making America more just and has also said that anti-Semitism is important to reject in the same way as racism, including during a September event about a recent film documenting the civil rights-era alliance between Jews and African-Americans. In January he supported a rally showing solidarity with the Atlanta Jewish community after the series of anti-Semitic attacks in New York and New Jersey.

The criticism of Warnock’s Israel record could become a defining issue in the two-month campaign before the runoff election, which is already drawing significant national attention and political donations.

The Republican Jewish Coalition on Tuesday tweeted a story about Warnock’s Israel record, saying, “Believe his actions, not his self serving words.”

Meanwhile, Warnock has the endorsement of Georgia’s only Jewish state senator, Democrat Mike Wilensky, as well as several Jewish U.S. senators and the Jewish Democratic Council of America, a pro-Israel progressive group. The council on Tuesday tweeted its support for Warnock.

“Reverend Warnock stands with the Jewish community, Jewish values, and stands with Israel; that’s why I support his candidacy to the United States Senate,” Biden organizer Ben Kanas tweeted on Tuesday. “His opponent stands against Jewish values and embraces those who favor the antisemitism of QAnon.”

Warnock was the top finisher in last week’s election. But because no candidate secured more than 50% of votes, Georgia’s rules require a runoff in January.

Also headed to a runoff is the state’s other Senate seat, where a Jewish candidate, Jon Ossoff, is trying to unseat the incumbent Republican, David Perdue. During the campaign, Perdue’s campaign ran a digital ad in which Ossoff’s nose was lengthened in an edit that Ossoff said during their final debate was an anti-Semitic dog whistle. (Perdue took down the ad after it drew criticism and said the edit was unintentional.)

In an interview, Habif said the broadsides against Warnock and Ossoff reflect the bigotries that afflicted Atlanta during the civil rights era.