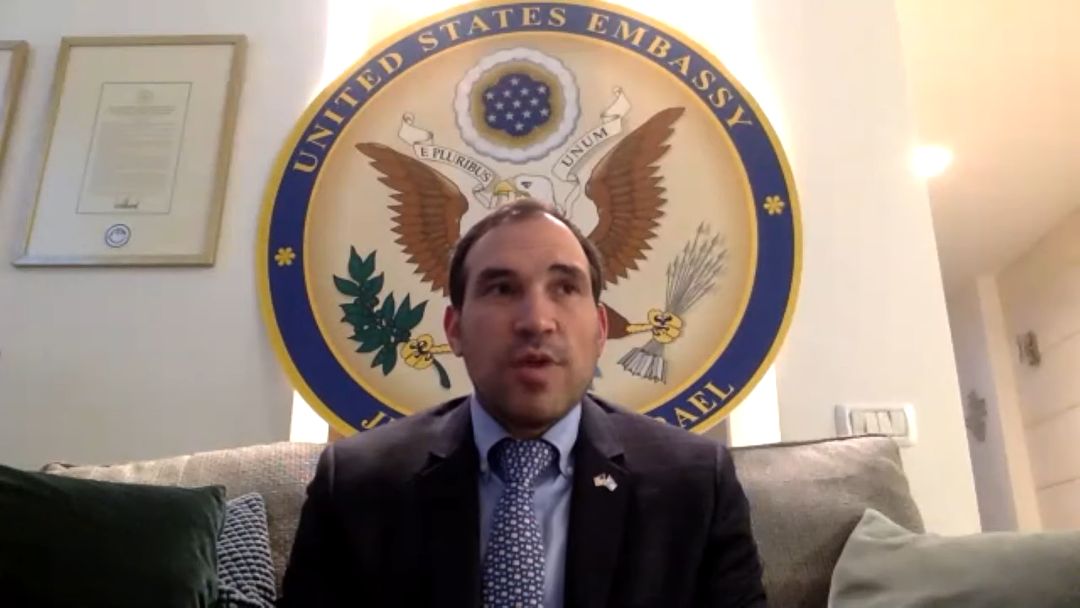 Rabbi Aryeh Lightstone, a senior aide to the U.S. ambassador to Israel, speaks from the embassy in Jerusalem to an online conference of Christians United for Israel, April 30, 2020. (YouTube)
Advertisement

WASHINGTON (JTA) — The Trump administration has chosen the first leader of a U.S. investment fund aimed at advancing Israeli-Arab peace: a right-wing rabbi who once raised funds for an Israeli political group so extreme that even prominent pro-Israel leaders have cut off ties.

Rabbi Aryeh Lightstone, a senior adviser to David Friedman, the U.S. ambassador to Israel, will head the Abraham Fund, sources told the Jewish Telegraphic Agency. The fund is an outgrowth of the recent normalization agreements between Israel and two Gulf Arab nations. One of its first projects will be to modernize the checkpoints that West Bank Palestinians must traverse, which the agency claims will ease their travel.

Congressional Democrats are raising the alarm about Lightstone’s appointment, saying it represents another example of Trump “burrowing” political appointees into sensitive career positions before he leaves office. In this case, they say, the appointment attaches the United States to Israel’s settlement enterprise, which is antithetical to the policies of President-elect Joe Biden.

Unlike political appointments, which new presidents always replace, placing someone in a career role like the one to which Lightstone is being named requires a more onerous process.

“The burrowing into a role that has important decision-making power, using taxpayer resources, in that part of the world cannot be done by someone who is clearly a partisan,” said a House aide who, like everyone interviewed for this article requested anonymity because the Lightstone appointment is not yet official.

Lightstone, 40, has a background in Jewish nonprofits, including the Orthodox Union and the National Council for Synagogue Youth. He is a  former executive director of Shining Light, a U.S. fundraising entity with ties to Israel’s right wing. Shining Light once gave $1 million to Im Tirtzu, a political attack dog group that has long targeted harsh criticism at liberal Israeli activists. Im Tirtzu’s activities led John Hagee, the prominent right-wing pro-Israel pastor, to cut off the group long ago. An Israeli judge ruled that it is not slanderous to characterize Im Tirtzu as fascist.

Lightstone is close to Trump’s Jewish circle of advisers. He officiated earlier this year at the wedding of Trump’s top immigration adviser, Stephen Miller, and Kate Waldman, an aide to Vice President Mike Pence, which took place at the Trump International Hotel.

When he was named to the embassy post, ethics experts questioned whether Lightstone’s government work would be influenced by his financial ties.

In addition to worrying about his ideological orientation, the congressional Democrats are concerned that Lightstone lacks the professional chops to work in development.

The Trump administration says that Lightstone, who has a business background and has been involved in the normalization of ties between Israel and three Arab countries, is the right person for the role. A senior administration official said the job is to be a “rainmaker” attracting investments, and that a vast staff of economists and other experts will back him up.

A request to the embassy for an interview with Lightstone was unanswered.

Democrats fear that Trump’s push to fill the position reflects his administration’s mad dash to set in motion changes that a Biden administration will find challenging to undo. An official told CNN this week that, especially when it comes to foreign policy, one goal is to set so many fires that Biden will struggle to put them all out.

Burrowing represents one tool. In a salient example, Trump named Michael Ellis as the general counsel at the secretive National Security Agency just after the election. Ellis was part of a team of partisans who attempted to sabotage Robert Mueller’s inquiry into Russian influence on the 2016 election. The impression among Democrats is that Trump is attempting to create a “deep state” of ideological bureaucrats to undermine Biden, mirroring the one that he imagines plagued his own term.

The senior administration official denied that Lightstone, who will continue to function as a senior aide to the ambassador, would act in an ideological capacity in his new role.

“He’s an on-the-ground guy who gets things done,” the official said of Lightstone, who has a reputation as being personable and gregarious.

The official said Lightstone has been instrumental in getting U.S. businesses to invest in joint ventures between Israel and other Middle Eastern countries, although the official did not give particulars.

The congressional Democrats who are alarmed by Lightstone’s appointment say they had no problem with the Abraham Fund more generally as an extension of the agenda that Jared Kushner, President Donald Trump’s son-in-law and adviser, has been advancing: promoting business ties between Israel and other Arab countries.

But they found it troubling that the administration was attaching the fund to the government’s development bank, the U.S. International Development Finance Corp., which they say must work without the taint of political or ideological affiliation in order to be effective in sometimes volatile lands.

“I don’t understand how border security or checkpoints would fall under the Development Finance Corp.,” a Senate aide said. The DFC was established last year, combining two older development agencies, the Overseas Private Investment Corp. and the Development Credit Authority.

The DFC says on its website that it “partners with the private sector to finance solutions to the most critical challenges facing the developing world today.” Its investments, the authority says, “serve as stabilizing forces in developing countries around the world, including some of the world’s poorest countries and regions affected by conflict.”

Asked whether funding Israeli infrastructure in the West Bank was not inherently ideological, the Trump administration senior official said that the DFC has among its mandates U.S. policy, and updating and improving the checkpoints comports with current U.S. policy.

A senior administration official said that the checkpoint improvements were aimed at improving Palestinian lives — not, as Palestinians say, strengthening an infrastructure that reinforces the occupation.

“I have 200,000 Palestinians coming into Israel that are waiting on an average of two to three hours every day at checkpoints,” the official said. “If I can upgrade that, which doesn’t cost a lot of money, and have it take 30 seconds, I am blowing up 400,000 work hours a day.”

In the new role, Lightstone would be based in Israel — a placement that Democrats are questioning. Most of the countries that would be targeted by the Abraham Fund do not have ties with Israel, which has a robust first world economy and in no need of development help. Aside from the checkpoint improvement plan, the Abraham Fund is, according to congressional staffers briefed on the fund, seeking investors for Israel’s natural gas exploration.

The Trump administration official said Israel had informal ties with many of the targeted countries and that future projects would target developing countries.