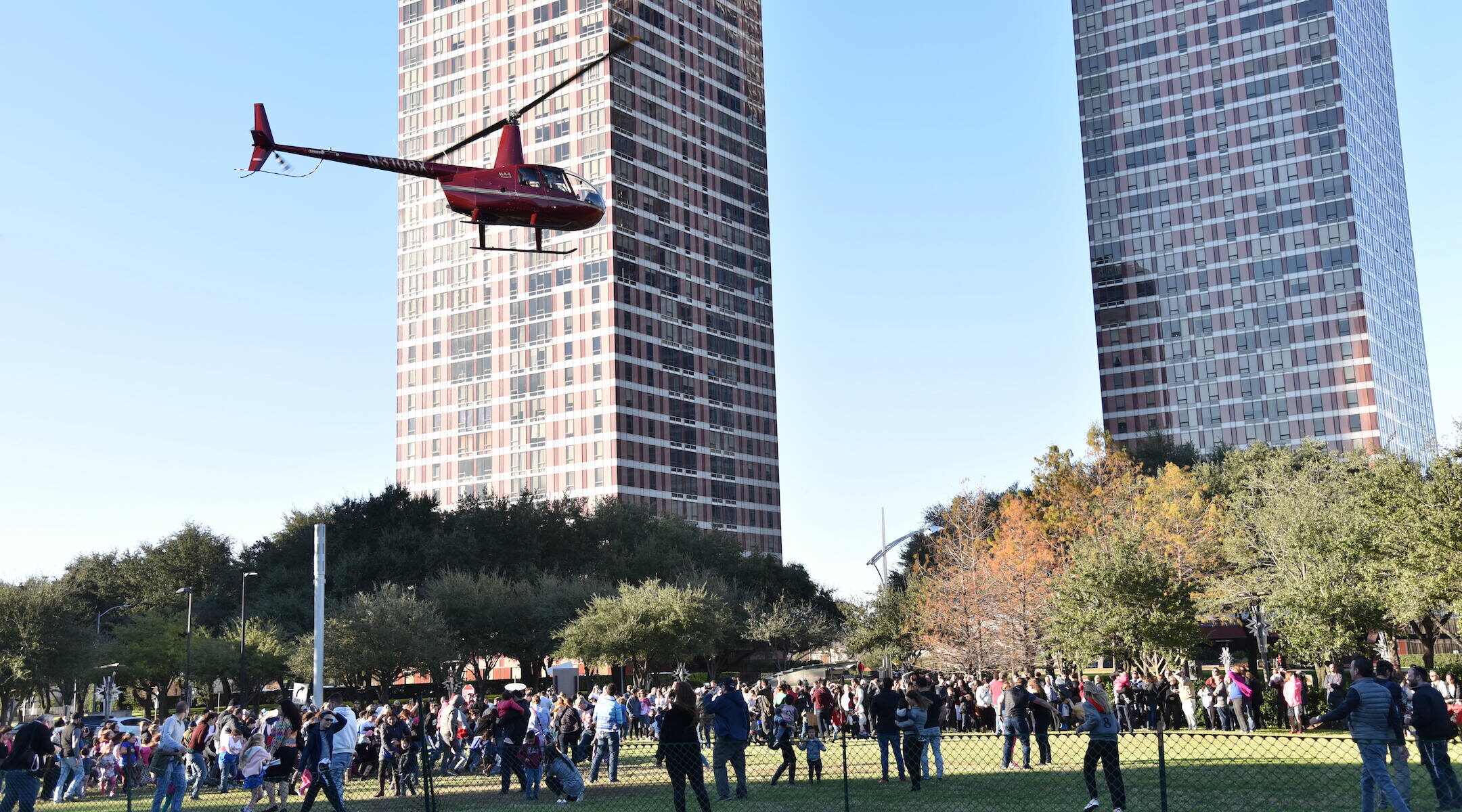 Chabad in Houston usually drops pieces of gelt from a helicopter. Social distancing derailed that event this year. (Chabad of Uptown)
Advertisement

DALLAS (JTA) — Most will be virtual, some will take place as part of tightly regulated events — but there will be menorah lightings and more Hanukkah festivities this year in Texas, despite the coronavirus pandemic.

“This year, more than ever, the light of Hanukkah is needed to increase the feeling of the triumph and eradication of evil with goodness, illness with health, sadness with joy,” said Rabbi Chaim Lazaroff, program director for Chabad in Houston, adding that the events this year have been “carefully chosen to adhere to best safety practices possible.”

Through large outdoor menorah lightings and other public celebrations they organize every year for the eight-day Festival of Lights, Jewish communities large and small throughout the state — from Lubbock to El Paso to Corpus Christi — don’t shy away from expressing their Jewish pride.

In Houston, the celebrations are among the largest in the state with a City Hall lighting ceremony, menorah car parade and “gelt drop” that involves the chocolate coins being dropped from a helicopter. It’s all organized by the city’s chapter of the Hasidic Chabad-Lubavitch movement, which is known for its outreach activities. 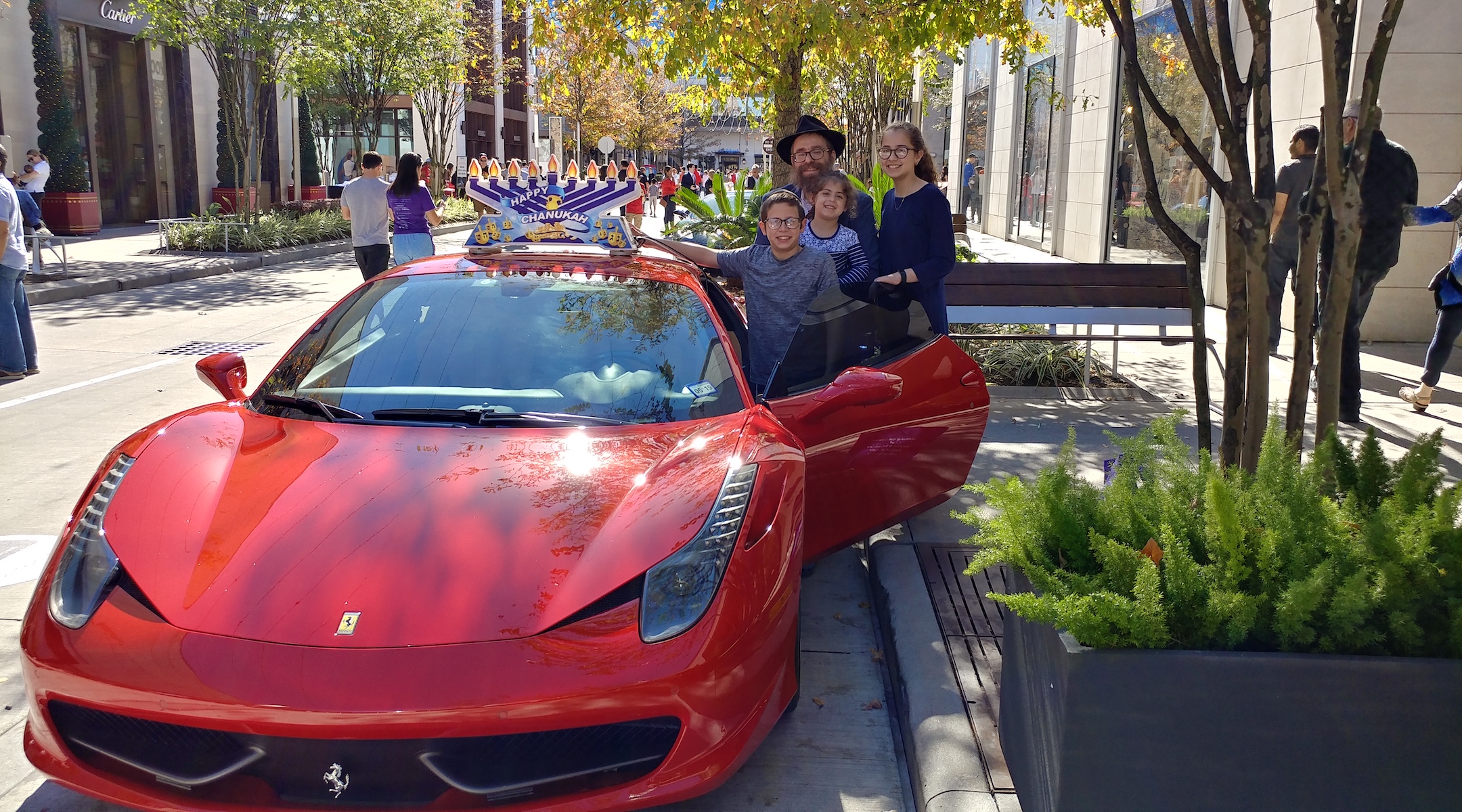 Houston Chabad Rabbi Chaim Lazaroff with his family and a menorah on a Ferrari that toured the city in 2018. (Chabad of Uptown)

But the limitations on public gatherings due to the pandemic has significantly changed the logistics this year in Houston and elsewhere in Texas, where Jews make up less than 1% of the state’s population of nearly 30 million.

The 25th annual City Hall lighting, for example, will only be accessible by Zoom. In place of the gelt drop, which became unfeasible under social distancing guidelines, there will be a “Distanced Gelt and Gift Hunt” involving a scavenger hunt for kids with prizes spaced at least 6 feet apart.

The car parade, meanwhile, featuring 71 vehicles – including police, fire trucks and EMS sporting menorahs — will still wind through the city’s streets on Dec. 10, the first evening of the holiday. 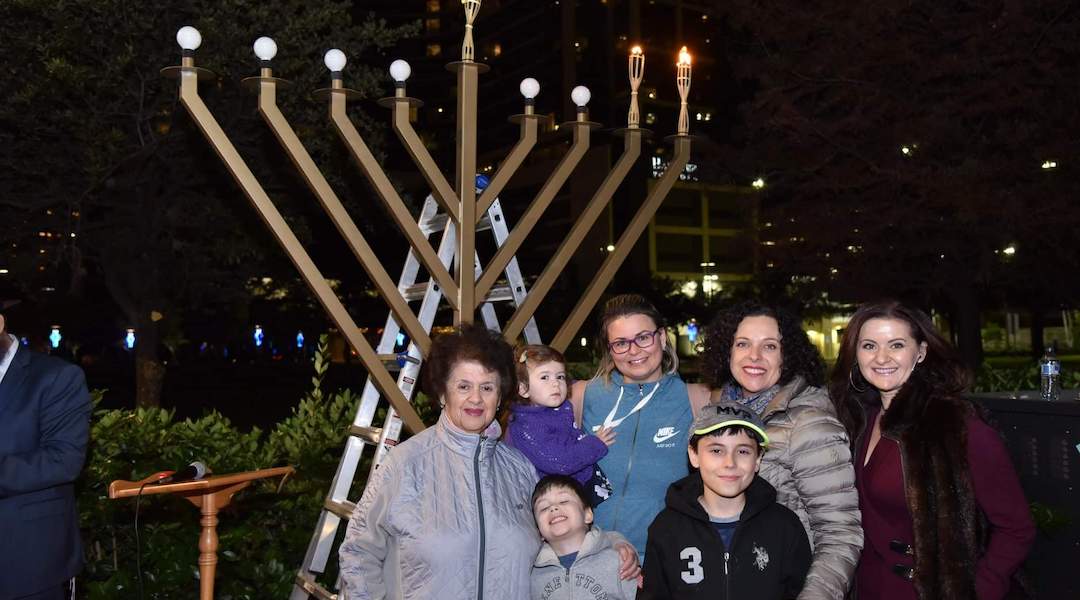 There are 13 Chabad-Lubavitch centers in Houston alone and 35 throughout Texas. A Chabad of Texas Towns based in Houston was established recently to increase the movement’s involvement in small towns and rural areas that are home to Jews in the state.

But Chabad isn’t the only organizer of Texas menorah lightings.

The tradition is especially important in El Paso, where the pandemic has hit hard and the city’s diverse Jewish community still lives in the shadow of the 2019 white supremacist shooting that killed 23 at a Walmart, said Robert French, executive director of the city’s Jewish federation. The federation is coordinating Hanukkah festivities this year with the city’s other Jewish organizations to include virtual lightings each night featuring a city Jewish group, as well as a socially distanced and masked public lighting on Dec. 10 at San Jacinto Park.

“Our theme is from darkness to light,” French said. “We really need the lightings to keep our spirits lifted. We knew we had to do something for the community.”

For Rabbi Deborah Goldman of Congregation Shaareth Israel in Lubbock, a city in west Texas, the synagogue’s virtual events will feel familiar. Goldman has been with the congregation of 41 families since 2016, but from afar — she lives in Los Angeles. Shaareth Israel will participate in the Institute of Southern Jewish Life’s virtual lighting and concert event along with nearly two dozen Jewish organizations in 13 states, including Texas groups in Humble, El Paso and Corpus Christi. 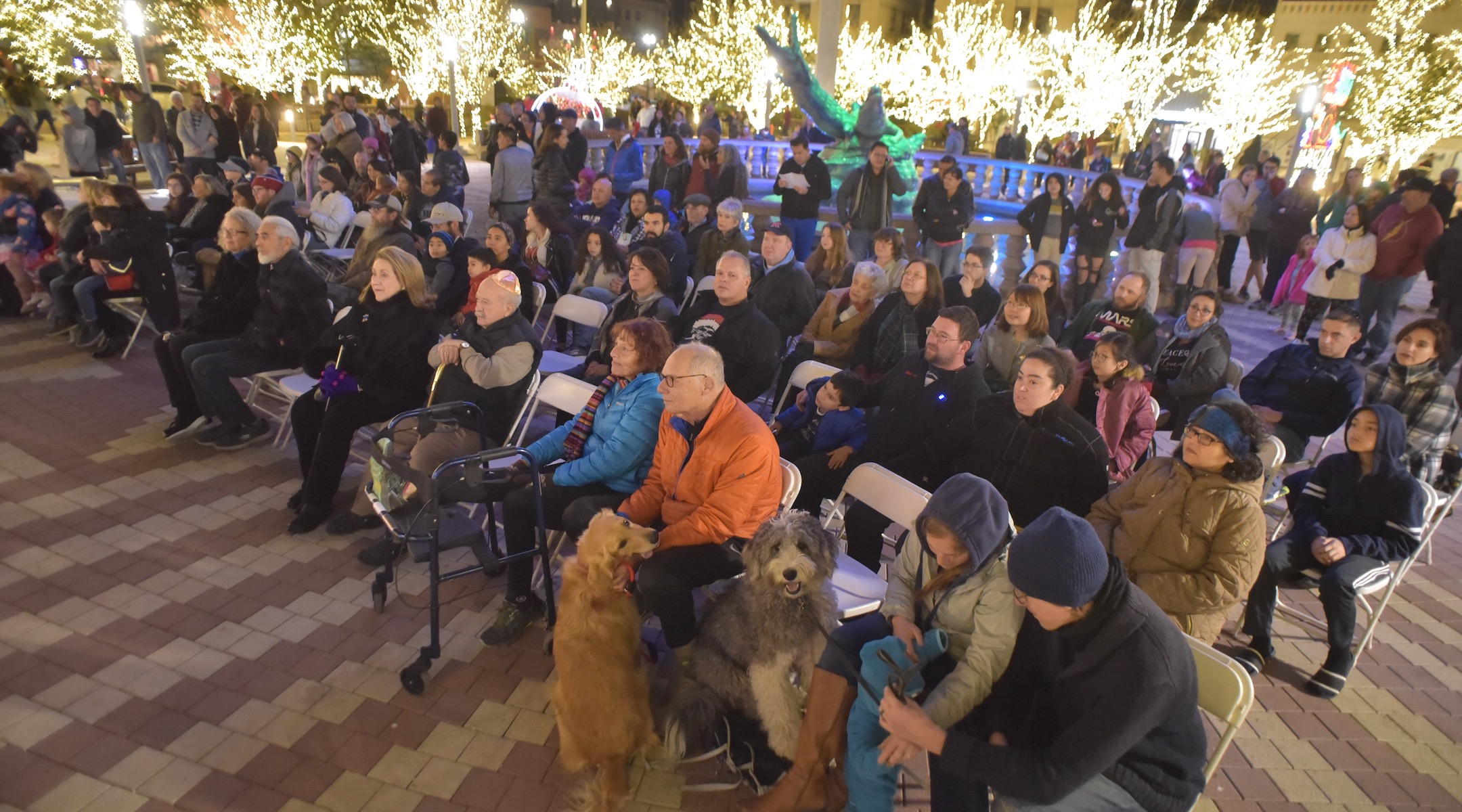 In Corpus Christi, about 200 miles south of Houston, the Jewish community center will hold a socially distanced and masked event on Dec. 10 on the grounds of its building as part of the Institute of Southern Jewish Life lighting. About 200 Jews live in the city on the Gulf Coast, but Norma Levens, the center’s executive director, said it was important to provide the city’s Jewish community a chance to get out of the house in a safe environment – even if it’s only a couple of dozen people.

“No, we’re not going to have as many as we had last year, but we need a chance to interact with each other,” Levens said. “The first rule is, ‘If you don’t feel safe, don’t come.’ But if you do feel safe, then this is a chance to share a unity of some sort.”

Texas is experiencing some of the highest coronavirus case and hospitalization rates in the country. Retail and restaurant capacity is currently allowed up to 75%, and Gov. Greg Abbott has resisted calls, including from the White House task force, to tighten public restrictions.

But not all the public festivities revolve around menorah lightings. In the small eastern city of Tyler, the local Congregation Beth El will move its immensely popular Hanukkah klezmer concert online. The event has sold out for 12 straight years – an impressive achievement, says Beth El Rabbi Neal Katz, since there are only 75 families in the congregation and most of Tyler and surrounding East Texas does not have a large Jewish population.

The University of North Texas, located in Denton, about 30 miles north of Dallas, has only 400 or so Jewish students in a population of about 40,000. Melissa Duchin, the executive director of the university’s Hillel chapter, said Hanukkah usually falls when students are already home for winter break. So besides a mention at the final Shabbat service before final exams, the students are typically at home without much ado about Hanukkah.

But this is no ordinary year. The Hillel will hold its first virtual menorah lighting for students on Dec. 15, after finals are complete.

“What we’ve seen this year, because we held events over the summer and saw it then, that it’s just very important to do something together as a community,” Duchin said. “Even if it wasn’t something we couldn’t do physically.”