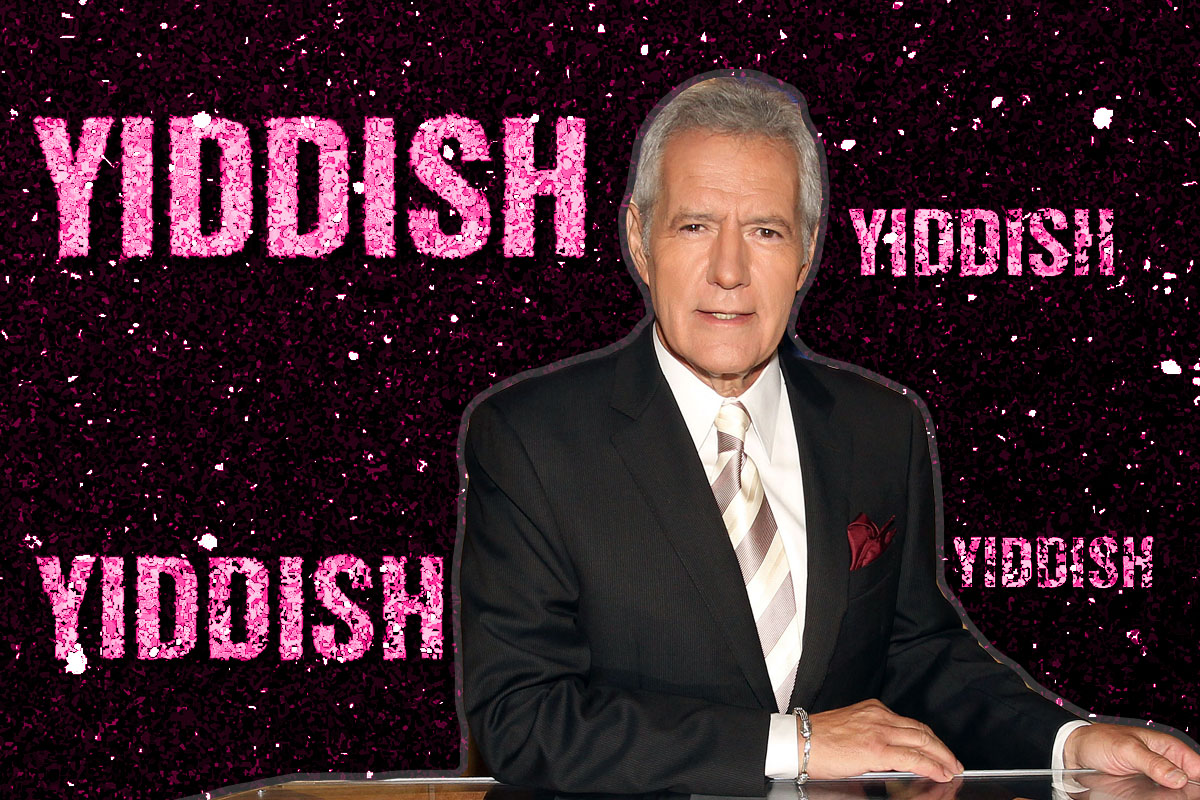 “Jeopardy!” fans have been hard hit by the loss of Alex Trebek, who died of cancer on Nov. 8 at age 80. But because the show films in advance — and Trebek kept filming until a week before his passing — the beloved longtime host is still with us until Jan. 4 with new episodes airing on weeknights.

Just why are we writing about this iconic game show? Well, Jewish questions and guests are not exactly rare on “Jeopardy!”. But on Monday night, the show had an entire category dedicated to Yiddish. The clueless contestants were clearly schvitzing — that’s “sweating” in Yiddish — and mostly stumped.

Of the five Yiddish questions, only two of the three contestants got two right. Let’s review them — read on and see how you would do!

(The answer is: What is schlock?)

Yiddish for $800: The opening to Laverne & Shirley used these 2 Yiddish words, one meaning an oaf, the other, an unlucky person.

(The answer is: What are schlemiel and schlemazel?)

Yiddish for $600: This verb means to haul or to move with effort.

(The answer is: What is schlep?) This one was correctly answered by contestant Ben Ring, an accountant originally from Allentown, Pennsylvania. Mazel tov, Ben!

Yiddish for $400: Sometimes in the middle of the night I’ll head to the kitchen and do some of this from the Yiddish for “snacking.”

(The answer is: What is nosh/noshing?) And, in case you didn’t know, The Nosher is the name of our partner site that’s dedicated to Jewish food.

Yiddish for $200: There’s no guilt in knowing that “gelt” is this; you’ll receive some with a correct response.

(The answer is: What is gelt?) Contestant and college administrator Tracy Arwari of Newport, West Virginia, got some gelt for this one. And, FYI, gelt is simply Yiddish for “money,” though of course we also love to eat chocolate gelt during Hanukkah!

Overall, while we found these questions absolutely delightful, longtime “Jeopardy!” fans voiced their frustration at the contestants’ lack of Yiddish skills on Twitter:

My family did well with the Yiddish category on @Jeopardy tonight. The players did not. Oy vey.

Growing up in Brooklyn helped me do pretty well in the Yiddish category. Also, not one of them knew Laverne and Shirley?! #Jeopardy

Smh at today's Jeopardy contestants and the Yiddish category

Of course, others schepped naches over how they ran the category from the comfort of their own sofas:

I just ran the #Jeopardy category about Yiddish words. This Southern Baptist Middle Tennessee girl has watched too many tv shows and movies…I guess. Thanks, Laverne & Shirley!

Got all 5 clues in the Yiddish category on @Jeopardy.
Wonder if my Catholic father and Protestant mother would plotz?! #Jeopardy

you think you're a new yorker for noticing bodegas. I'm a long island Catholic who just dominated the yiddish category on jeopardy. We are not the same

How would you have done? Personally, I found the questions all extremely easy, but, you know, I work for a Jewish publication. Nonetheless, we did get verklempt watching Trebek impart his viewers with some Yiddish knowledge, knowing that in just over a month we’ll have to say goodbye to him on TV. May his memory be for a blessing. 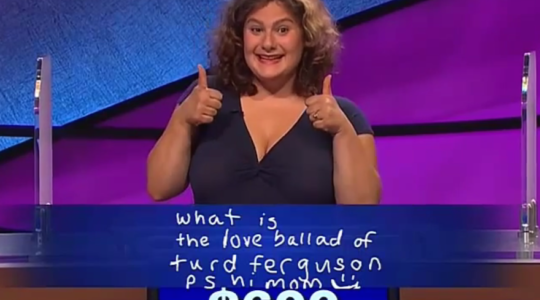