Menorah at Dartmouth shot with pellets, in latest Hanukkah attack 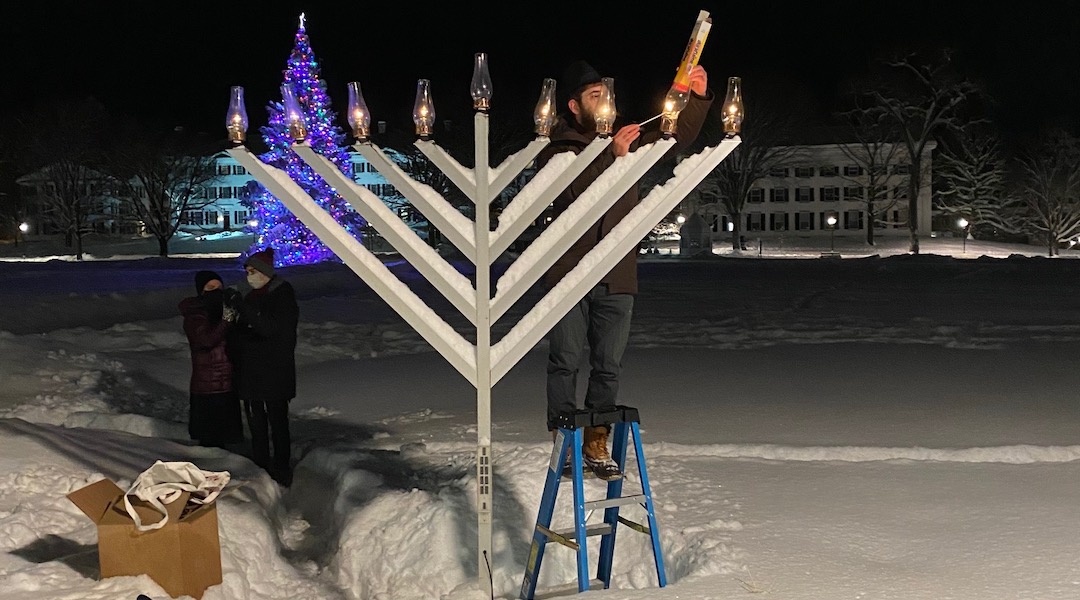 Rabbi Moshe Gray lights the Dartmouth campus menorah the night after he discovered that it had been shot through with a pellet gun. The menorah can still be lit with fire despite the vandalism. (Courtesy of Gray)
Advertisement

(JTA) — A public menorah at Dartmouth College was shot with a pellet gun, in the latest anti-Semitic incident during the holiday of Hanukkah.

Rabbi Moshe Gray, who runs the campus Chabad center with his wife Chani, said he discovered the vandalism on Wednesday evening, as he prepared to turn on the menorah’s electric lights for the holiday’s seventh night. Holes from a pellet gun had broken seven of the menorah’s nine lights.

He says he knew it was a targeted attack on the menorah, which stands in a central location on campus, because a nearby Christmas tree was left unharmed.

“Nothing like this has ever happened,” in the couple’s 17 years on campus, he told the Jewish Telegraphic Agency Thursday. “Dartmouth is pretty quiet when it comes to things like this. It was pretty shocking to come to the realization that somebody, on purpose, shot the menorah.”

There are about 400 Jews amid a total Dartmouth student body of 4000, according to the school’s Hillel.

In a letter to the school community, Dartmouth President Philip J. Hanlon called the vandalism “an affront to all.”

“To the Jewish members of our community, at Dartmouth and beyond, we stand with you in anger and sadness at this despicable act, which is much more than vandalism or a prank, for it seeks to diminish the rich culture and history of the Jewish people,” he wrote.

This is the most recent in a string of anti-Semitic incidents during this Hanukkah. At a Chabad menorah lighting in Kentucky, someone shouting anti-Semitic slurs from a car ran over a man’s leg. The website of a Long Island Jewish high school was hacked and defaced by neo-Nazis. A menorah was also vandalized in California.

Gray said he was heartened by the response from the Dartmouth community. More than 100 people showed up either virtually or in person despite heavy snowfall to light the campus menorah Thursday night. (The menorah can be lit with actual fire, a function it still has despite the attack.) And Gray mused about printing t-shirts for Chabad that read, “When they bring the darkness, we bring the light.”

“This is what we do in Chabad,” he said. “We’ve dedicated our lives to spreading Judaism and spreading kindness.”

He added, “Next year, we’ll probably get a bigger menorah.”