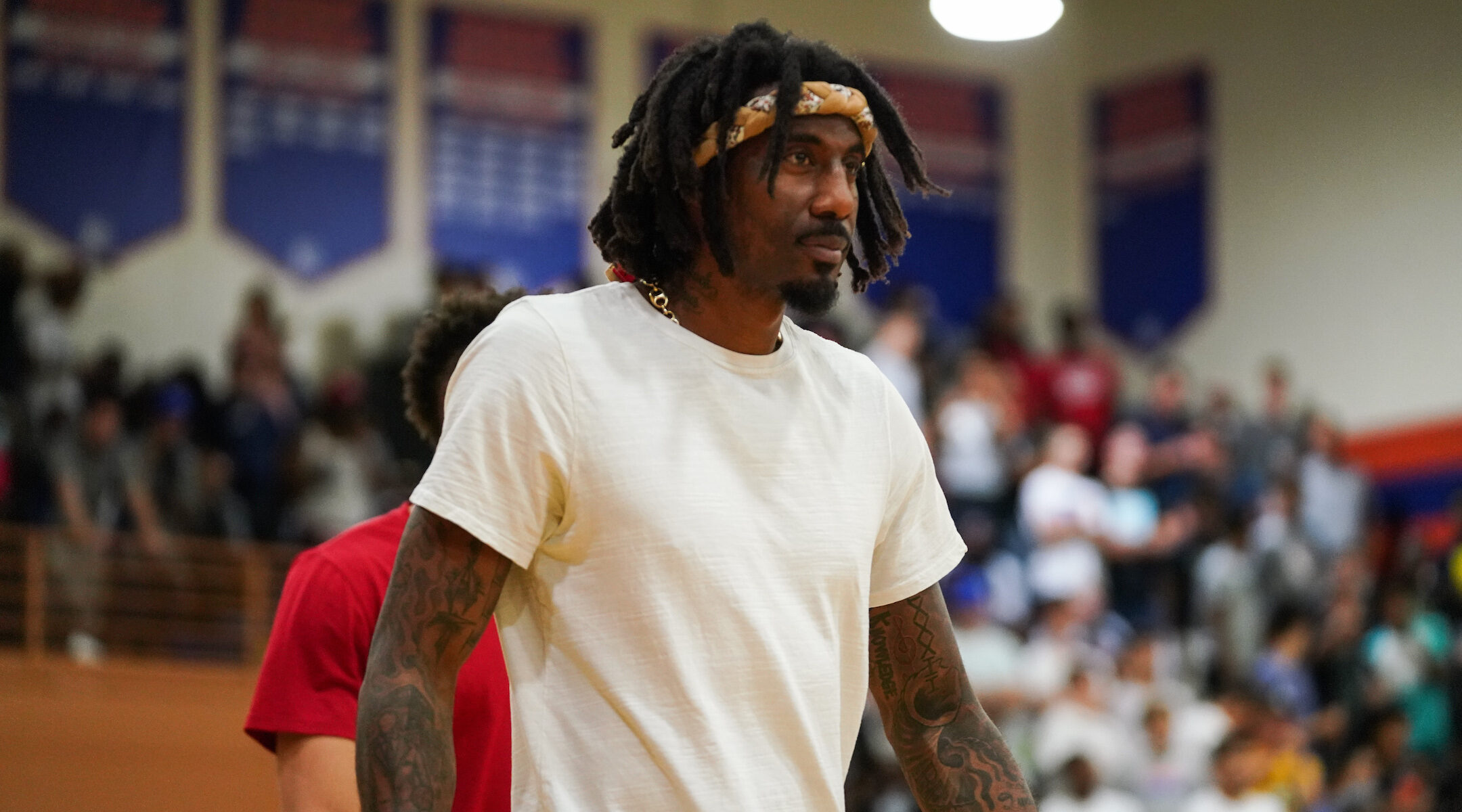 (JTA) — Asked by one of New York’s wealthiest men, in a forum convened by one of the world’s largest local philanthropies, how he would improve relations between Black and Jewish Americans, Amar’e Stoudemire had a quick answer.

“I’ve created a program … like an educational center where students can go and play basketball or they play their recreational sport and you have a rabbi will come in and just have a lesson throughout the day,” Stoudemire said. “You know there’s a 1 o’clock lesson, you guys want to join? ‘Hey, Rebbe Pinchas is having a lesson on God’s creation, feel free to sit in.’”

The exchange came during an extended conversation between Stoudemire, the basketball coach and former NBA star, and billionaire hedge-fund investor Dan Och Monday night, during a Zoom call organized by the UJA Federation of New York. (UJA-NY supports 70 Faces Media.)

With a laugh, Och suggested that Stoudemire was onto something.

“You know Eric Goldstein’s on the call here,” he said, referring to the CEO of the New York federation. “And I’m sure if we’re not already involved in funding and growing that program, we’re certainly going to be, starting tomorrow.”

Stoudemire’s idea marries his two passions. During the call, he explained how a 6-foot-10 NBA All-Star became so interested in religious Judaism and his African Hebrew roots that he underwent an Orthodox conversion. He also described how he has maintained his Jewish practice as a celebrity in the spotlight.

And he offered his uniquely Jewish vision for bringing together two communities whose historic alliance has frayed over time.

Stoudemire, now 38, told Och that his mother first brought up the concept of their Hebrew roots when he was 14 or so. During a fraught childhood, which involved poverty and the death of his father when he was 12, the young Stoudemire began to research Jewish history and various Black Hebrew movements on his own. Eventually he would study the topics with a group of high school friends.

He was drafted into the NBA straight out of high school, but despite the whirlwind experience, he kept up his research and found new study partners (he didn’t name them on the call). 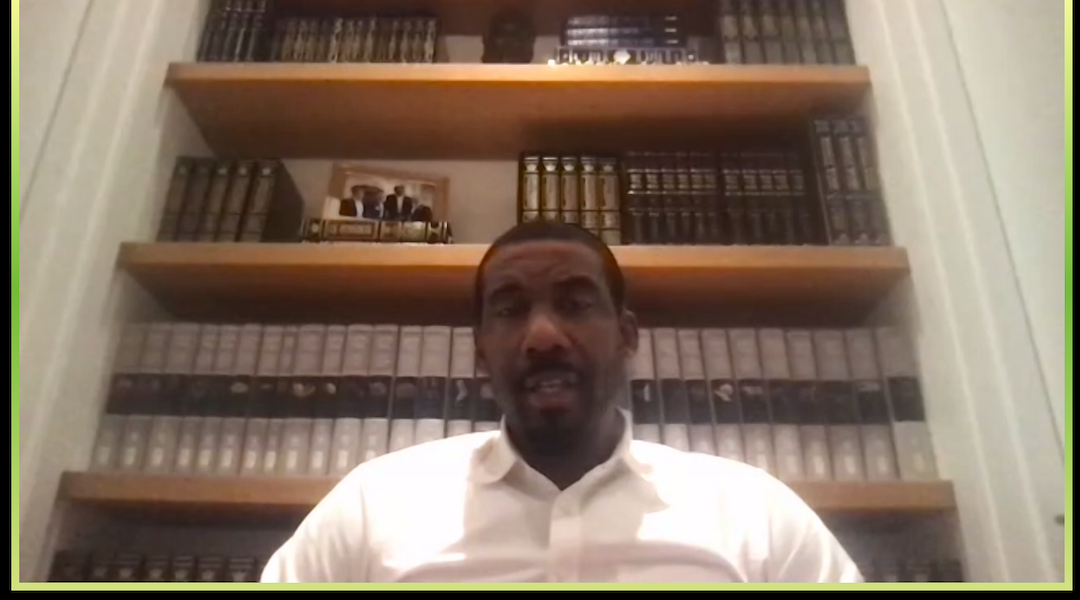 “We would have on the table, you know, a Western civilization history book, we’d have a Tanakh open, we’d have a Torah open, we’d have these different school books  and we’d try to figure out exactly what’s happening here,” he said, sitting in the Zoom call in front of a bookcase packed with Jewish texts.

When he was 24 or so, Stoudemire said he had an epiphany about Judaism as a religion and an “organized structure,” instead of an interest that he had dug into without any guidance. What ignited his passion was the idea of becoming more like a “prophet” — especially after what he described as the “many mistakes” he felt he had made in his personal life as a young star athlete.

“I was always intrigued with the prophets, I was always intrigued by how these guys carried themselves. How they lived their life, how they were so on point with everything, from a righteous standpoint. And so my mindset was like, ‘How do I get to that level?’ It’s a heavy lift, it’s not easy, I’m not sure it’s possible,” he said. “And so that is what somewhat gave me my love to continue my search, continue to try to clean myself up, clean my character, understand how to carry myself, how to speak properly, how to not use profanity, how to not say certain words, not speak lashon hara [saying negative things about someone].”

He kept all of this private until 2010, when he visited Israel for the first time. Teammates, friends and the press all asked him why he would visit there, out of all the vacation destinations in the world. He told them he was educating himself about his “Hebraic roots.”

“Once that word got out it was basically over from there,” he said.

After knee injuries derailed his high-profile stint with the New York Knicks, he moved to Israel to play in 2016 for Hapoel Jerusalem, a team that he also co-owns. Over the next few years he would go on to win Israeli basketball championships with both Hapoel Jerusalem and Maccabi Tel Aviv (where he was a teammate with Deni Avdija, the Israeli recently selected ninth overall in the NBA draft).

But his post-NBA career has involved more than just Israeli basketball — he also started a kosher wine label, underwent an official Orthodox conversion to Judaism and opened a program at a college Hillel to connect Black and Jewish students. He is now an assistant coach for the Brooklyn Nets and is working on an MBA through the University of Miami.

Och was impressed with how Stoudemire kept up his Jewish study, and how he kept his enthusiasm after leaving the world of the NBA.

“I went from being A-list celebrity, I was going to all the fashion shows, all the Met galas, all the operas, all the Broadway shows, I was on David Letterman, I was on Jimmy Kimmel, I was all over,” Stoudemire said. “But Israel was just pulling at me. … It was definitely an experience for me, a humbling experience. I truly had to humble myself completely, to go from this top level situation to more of a downgrade, but for the sake of Torah. So that was the idea and why I made that decision.”

He said he hoped in his community center to create a setting where more young people who enjoy basketball can engage with Judaism, if not to follow in his own path but to learn about ideas that might help them on their own — and might accelerate bonds across communities.

“That kind of atmosphere is what I’m looking to build. So that way these kids who are not from a Jewish background or not totally familiar with it, they just want to go there to play ball, have a good time, but yet they’re hearing these guys speak Hebrew here and they go back home and go, ‘Mom, I’ve learned about how not to speak ill will against someone,’” Stoudemire said. “I know that little conversations seem small and minute to us but if you add that up per month and his friends now want to join, take that by a year, the community is changing. The mindset of the African American community is changing towards the Jewish community. There’s more love gravitating, there’s more understanding happening.”