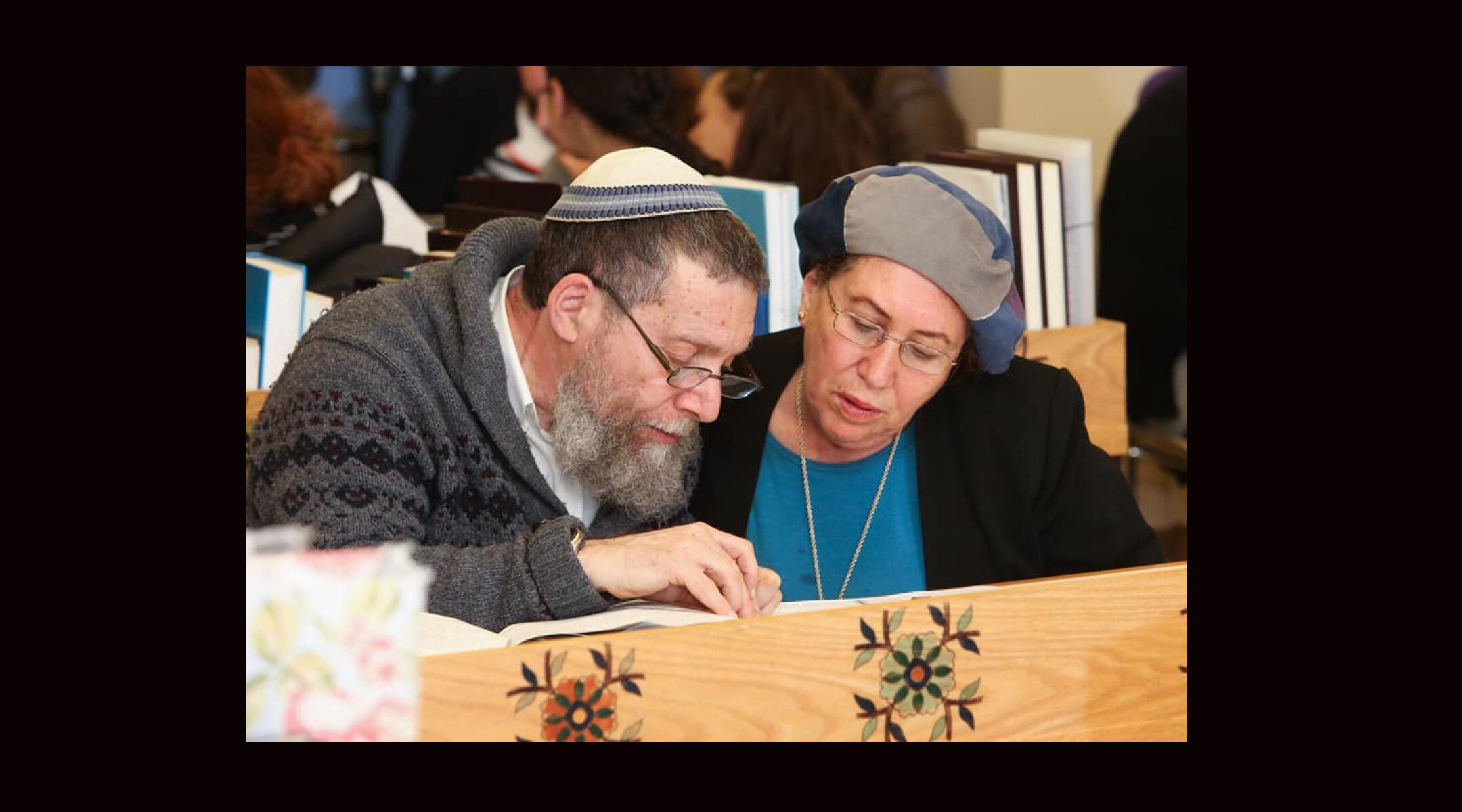 Henkin and his wife, Rabbanit Chana Henkin, founded a program for women to study the laws of family purity and answer Jewish legal questions on the subject — breaking new ground for women’s leadership roles in Orthodox communities. In 2018, Henkin was the recipient of the Katz Prize in recognition of his work on women’s place in Orthodoxy as well as his numerous published works of Jewish legal opinions.

In 2015, the Henkins’ eldest son and daughter-in-law, Eitam and Naama Henkin, were killed in a terrorist attack in front of their four children. Eitam Henkin had been a scholar in his own right and a close student of his father.

Yehuda Herzl Henkin was born in the United States in 1945 and attended the Yeshivah of Flatbush, an Orthodox school in Brooklyn, before studying with his grandfather, Rabbi Yosef Eliyahu Henkin, one of the most important Jewish legal authorities in New York City for much of the 20th century. Henkin studied with his grandfather for five years and received semicha, rabbinic ordination, from him.

Along with his wife, also a teacher of Torah, Henkin moved to Israel in 1972 and settled in the community of Beit Shean in the north. It was there that Chana Henkin became involved in educating women in the local communities about the laws of “taharat hamishpacha,” family purity.

The couple later moved to Jerusalem, where Chana Henkin founded Nishmat, a seminary for women to study Torah, in 1990. In 2000, the Henkins and Rabbi Yaakov Warhaftig founded a program for women to become experts in questions of family purity.

Graduates of the program would be equipped to answer questions related to taharat hamishpacha that can be uncomfortable for women to address to male rabbis. While the graduates could answer many questions posed by women, they would not be ordained as rabbis, and any questions that required “psak,” a decision over an area of the law that is unclear, would be addressed to leading Orthodox rabbis.

Though some criticized the program for pushing too far in creating a new role and title for women as experts in Jewish law, Rabbi Henkin’s authority and reputation lent added legitimacy to the endeavor, allowing the program’s graduates to become widely respected in many parts of the Orthodox community. Today there are 146 graduates, known as “yoatzot halacha,” working around the world.

“The support he gave and putting his reputation behind yoatzot halacha, together with his wife, that has made an enormous contribution to the growing acceptability of the role of women in matters of halacha,” said Rabbi Saul Berman, a professor of Jewish studies at Yeshiva University and a professor at the Columbia University School of Law.

But even as the yoatzot halacha program pushed the boundaries of Orthodox roles for women’s leadership, it did not go so far as other Orthodox advocates for women’s leadership roles. In 2010, Rabbi Avi Weiss of New York ordained a woman as a rabbi and subsequently founded Yeshivat Maharat, which would ordain women, leading to accusations that he and his students were no longer Orthodox.

“Their whole posture is incremental change,” Adam Ferziger, a professor of Jewish history and contemporary Jewry at Bar-Ilan University in Israel, said of the Henkins. “They didn’t want head-on collisions, they were looking to stretch things, give them an halachic basis, but always in a way that wasn’t looking to push the more conservative people into a corner.”

Berman described that gradual approach as “a sense of balance between the halacha and the realities of the community.”

“He brought that kind of balance, of gradualism, in making advances particularly for women in the community, which was clearly a substantial focus of his in his writing,” Berman said.

In his legal opinions, Henkin could be forceful. He stuck up for his grandfather’s position that women could recite the Kaddish, the mourner’s prayer, in synagogue along with the men. He argued that women could fulfill the obligation to hear the megillah on Purim by reading it for themselves or by hearing another woman read it, but that women could not read megillah on behalf of men.

Even in his first volume of Bnai Banim, his collected opinions published in 1981, Henkin began evaluating questions related to contraception and how women could attend synagogue services while caring for young children — issues that became more central to Jewish legal discourse years later.

“In many ways he anticipated and pioneered decades of halachic discussion,” said Laurie Novick, a yoetzet halacha who worked closely with Rabbi Henkin on Nishmat’s yoatzot website, yoatzot.org, to which women can submit Jewish legal questions relating to taharat hamishpacha.

But he also disagreed with certain positions taken by the more progressive wings of the Orthodox community.

While Henkin believed there was no major legal issue with the women’s prayer groups that became popular in the 1980s, where women led prayer services for women, he wrote that he was not certain enough to issue a ruling and left it up to greater authorities or local rabbis to decide for their own communities. And he made clear his disagreement with proponents of partnership minyanim, in which women can lead parts of the service and read from the Torah for men and women, when they became popular in more recent years.

“He did not really believe that just because you could make a halachic case for something that the community should, of necessity, move in that direction,” Berman said.

Rabbi Henkin and Rabbanit Henkin agreed on that point, building the yoatzot halacha program in a way that could achieve broad-based support.

“He and Chana together had decided that they would not push for traditional semicha for these women,” Berman said. “They felt that would marginalize them in the community and it would prevent the kind of eventual acceptance that would be achieved by creating changes on the ground.”

And Henkin’s stature as a legal authority helped garner support for the program.

“Could she have started the yoatzot program without him? Yes, she could have,” said Atara Eis, director of Nishmat’s Miriam Glaubach Center educating yoatzot halacha in the United States. “She would have gone to all of the rabbanim and gotten the support and done it in her quiet way and she would have done it.

“But certainly it’s a different level when he simply supported everything she did.”

Even after the yoatzot program was fully established, Henkin remained involved in the program and continued to administer the final oral exams given to its students. He taught the yoatzot how to write responsa, Eis said, providing feedback to ensure that the opinions they produced would be considered authoritative.

In 2017, Nishmat published its first collection of responsa written entirely by women, called “Nishmat Habayit,” one of the first volumes of Jewish legal texts authored by women scholars.

“He taught these women how to write shutim,” Eis said. “That’s learning from the best.”

Berman said the fruits of the early generation of pioneers in securing space for women in serious Torah study in Orthodoxy is now beginning to be felt.

“Everyone who was involved in the promotion of women studying Talmud and women studying Torah understood that out of that group, there would emerge women whose voices would be so significant that they would impact in very important ways the history of halacha,” he said. “That’s because of all of this groundwork that was laid by many people, but particularly by him and his writings in halacha.”

Chana Henkin acknowledged the support her husband gave to her work and her vision in a eulogy Thursday, saying that even when she traveled to the United States 10 times a year to fundraise for Nishmat, he never protested.

“The story of the seminary is a story of, time after time, you saying ‘do what you have to do,’” she said. “But there is nothing great that I did, that was sketched out by me, without the main one sketching things out being you.”

But the partnership worked in both directions and would last until the very end of his life.

“We sat on Friday nights and went over the weekly Torah portion and asked about everything, big or small, and we did the same on Shabbat morning. And at the third meal on Shabbat afternoon we would read the next week’s portion. Many of the questions that we asked at the beginning of Shabbat we had answered by Shabbat’s end,” he wrote. “From those Shabbatot came the kernel of this book and many of my wife’s answers are included within it.”