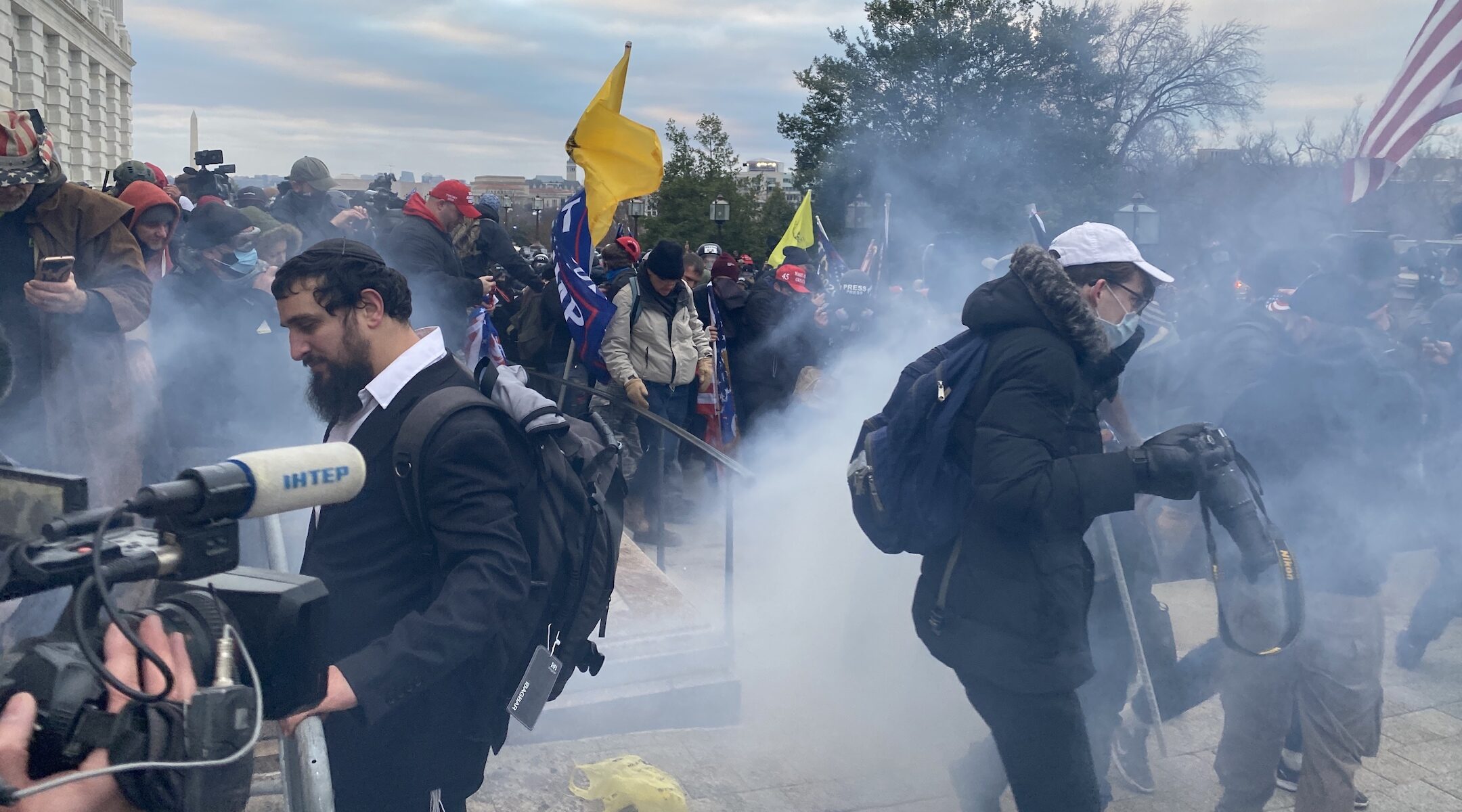 Security forces respond with tear gas after the US President Donald Trumps supporters breached the US Capitol security in Washington D.C. on January 6, 2021. (Tayfun Coskun/Anadolu Agency via Getty Images)
Advertisement

(JTA) — Heshy Tischler, the pro-Trump provocateur of Orthodox Brooklyn, wasn’t at the U.S. capitol when a mob stormed it Wednesday — but not because he didn’t want to be.

Tischler was one of a throng of Orthodox Jews who traveled down to D.C. to join mass protests of the election results Wednesday. He had left the city before the protest turned into an insurrection that drove members of Congress and the vice president into hiding, and in which a woman was killed.

But that afternoon, unaware that his compatriots were now occupying the Senate chamber and its environs, he said that he, too, would like to take his complaint straight to the halls of Congress.

“We want to be there,” he told the Jewish Telegraphic Agency. “We just can’t get in.”

On his show Wednesday night, he condemned the violence, and said he would have handled the situation differently. “If I was actually in the front I wouldn’t have stormed, I would have walked in the doors,” he said.

Much of the Orthodox community had lined up behind Trump ahead of the election. Polls showed Orthodox voters supporting him by overwhelming margins. In the same week that mobs of young Orthodox men burned masks in the streets of Brooklyn in October, crowds of the young men carried Trump flags in their protests against lockdowns.

And on Wednesday, some Orthodox Jews took their support for Trump to the next level, traveling to Washington to participate in the Trump rally that turned into a mob.

Orthodox Jews were present at the rally where President Trump spoke Wednesday, telling the crowd to “walk down to the Capitol” and that “you will never take back our country with weakness.” But many Orthodox Trump supporters condemned the violence that followed when protesters stormed the capitol.

For some Orthodox Jews, it appeared to be a moment of reckoning that made them reconsider their support for the president. But many claimed, without evidence, that the mob was the result of meddling by Antifa or of people who were not really “conservative” co-opting the movement. Others compared the mob to the Black Lives Matter protests last year.

It was a shameful day, they said, but it did not make them regret their support for Donald Trump.

“Had John Roberts heard that case and legitimately heard that case and Trump would have lost, I probably wouldn’t have gone today,” Nachman Mostofsky said, referring to a petition to the Supreme Court to hear a case over alleged election fraud in the 2020 presidential election. The court rejected the petition.

Mostofsky, who serves as executive director of Chovevei Zion, a politically conservative Orthodox Jewish advocacy organization, was in Washington for the opening of the new session of Congress and extended his stay to attend the protests. He said he left before the storming of the Capitol, and condemned the violence that took place there.

He was also one of a few Orthodox Jews who, speaking to the Jewish Telegraphic Agency, appeared to compare Wednesday’s events to the racial justice protests that spread across the country last year.

“No conservative will condone what happened today, the actual storming of the Capitol…it was unpatriotic,” he said. “But we heard for months during the summer when people don’t feel heard, this is what happens.”

Dov Hikind, an Orthodox Jew who represented the heavily Orthodox neighborhood of Borough Park for decades in the New York State Assembly, said he was horrified by the violence and, although he himself questioned the results of the election back in November, called the president’s claims about election fraud “malarky.”

“Biden won by 7 million votes,” he said, noting that virtually all claims of voter fraud brought by the Trump campaign were found to be without evidence. “Every single case was almost, without exception, the courts ruled against Trump.”

While Hikind said there was no point in continuing to claim that Trump won the election, he defended the rights of Trump supporters to protest in support of the president. He said Wednesday’s events went far beyond that.

“What happened today was very different, the violation of laws, taking over the Capitol. I mean my god, the irony of this is that the Republicans are the ones who talk about law and order,” he said. “What a contradiction, what hypocrisy.”

But he also said it was hypocritical to speak out about violence at the Capitol after the racial justice protests turned, in some instances, violent.

“As much as what we saw today was an absolute horror especially because it happened at the Capitol, but it was only a short while ago that you had violence all over this country,” Hikind said. “My party, the Democratic party, was not so vociferous and so outspoken in terms of that violence.”

Eli Steinberg, an Orthodox writer who lives in Lakewood, New Jersey and who voted for Trump, called the violence “an awful moment.”

But he also didn’t see the episode as reason to regret his support for Trump.

Agudath Israel, an advocacy organization for haredi Orthodox Jews, did not issue a statement. The Orthodox Union, an organization representing Modern Orthodox synagogues, joined the Conference of Presidents of Jewish Organizations, of which it is a member, in issuing a statement condemning the violence Wednesday. On Thursday, the Orthodox Union issued its own statement condemning the violence. “We call upon President Trump to do all that is in his power – and it is indeed in his power – to restore that peace,” the organization said.

The National Council of Young Israel, an Orthodox synagogue association that has been outspokenly pro-Trump in the past, also “strongly condemned” Wednesday’s events, saying in a statement that “the violent protests and wanton attacks that we witnessed today are deplorable and a dangerous assault on the very foundation upon which this nation is built.”

The Reform and Conservative Jewish movements, which are generally more liberal than Orthodox organizations, both condemned the mob’s actions.

On social media, some Orthodox leaders denounced the violence. Chaskel Bennett, a leader of Agudath Israel, called the violence “reprehensible and frightening.”

This kind of lawlessness is reprehensible & frightening. I will never support violence & anarchy and those that do, don't represent me. Responsible Americans who care about our country should condemn this brazen hijacking of democracy. It's not who we are or who we want to be. https://t.co/s50CdFjEpY

Others seemed to downplay it.

Yossi Gestetner, who runs the Orthodox Jewish Public Affairs Committee, told his followers to “relax” and called the rioters’ actions as entering “a building unauthorized.”

Relax folks. This country is not having a Civil War any time soon.

After 5 years of they and their leaders being violently attacked and also abused by the State via prosecutions, the same side can’t even enter a building unauthorized without being denounced by their own side.

He tweeted again later, seeming to question whether there were any alternative to violence as a remedy to a “stolen” election.

What if 30 years down the road the POTUS elections are clearly stolen and nobody (Secs of States, Legislatures and the Courts) wants to stop it and/or they enable it.

Is that a democratic remedy?

Who decides when those actions can be triggered? https://t.co/kDWeqTnl9r

Michal Weinstein, a pro-Trump Instagram influencer who organized a pro-Trump rally in her Orthodox community on Long Island in October, declined to comment on the violence. “I don’t want to be part of something that’s going to paint Trump supporters as evil and bad,” she said.

But her co-organizer of the October rally, Gila Jedwab, went to Washington for the rally, posting a photo of herself in front of the Capitol to Facebook. “We took back our house today,” read the caption.

The WhatsApp groups created to organize travel and meetups for Orthodox Trump supporters at the rally were divided. Some members condemned the mob, but others thought the violence was worth it. After one person wondered what the rest of the world must be thinking, another responded: “You gotta fight for freedom.”

Some alleged that the violent protesters belonged to Antifa, a loose network of anti-fascist activists who sometimes dress in all black and engage in street fights with right-wing extremists. Trump and his supporters have sought to portray Antifa, often without much evidence, as a threat to public safety.

One member sent a screenshot supposedly showing an announcement to Antifa members to show up for “election day” wearing Trump gear. One claimed in a voice message, “I bet you right now that people who started the rioting part was Antifa.”

Mostofsky said that even if he didn’t support the violence, the grievances that caused the protest — over what Republicans have baselessly claimed is widespread election fraud — couldn’t be ignored and wouldn’t go away.

“The country is being gaslit by the media and by the courts and by the Democratic Party and by some in the Republican Party,” he said. “What you saw today was frustration, I don’t condone it … but I understand where it came from.”

Editor’s note: This story has been updated to include a statement by the Orthodox Union issued Thursday morning.