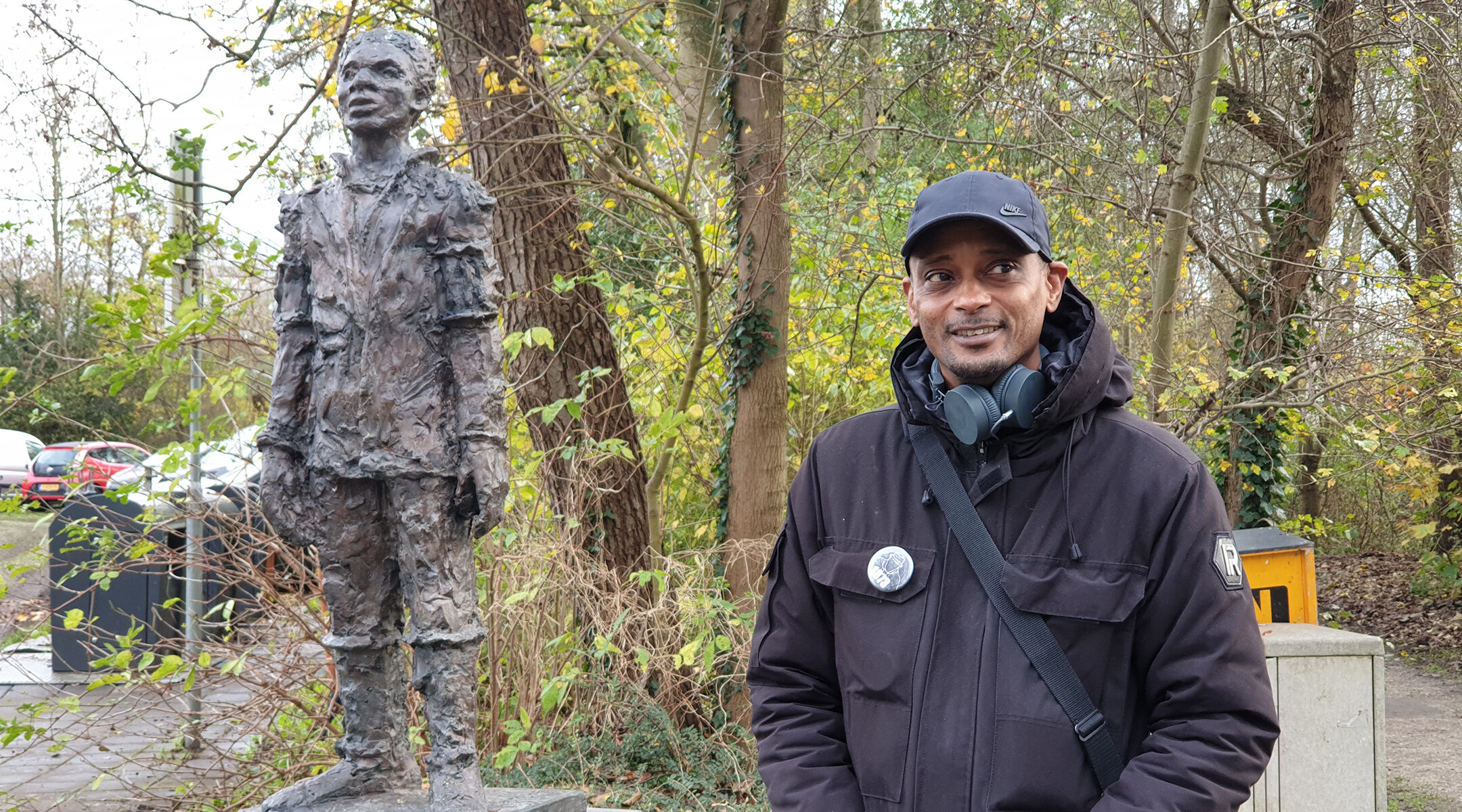 Sergio Berrenstein stands next to the statue of Elieser at the entrance to the Jewish cemetery in Ouderkerk aan de Amstel, the Netherlands, Nov. 20, 2020. (Cnaan Liphshiz)
Advertisement

OUDERKERK AAN DE AMSTEL, Netherlands (JTA) — Each year on the last Wednesday of June, dozens of people arrive by boat at the Jewish cemetery of this picturesque town near Amsterdam to commemorate their ancestors.

The visitors are almost all Black; none are Jewish.

At the cemetery, they play drums, dance, recite Christian prayers and observe rites of Winti, a traditional Afro-Surinamese faith that combines pagan and Catholic traditions. The rites involve blessing water and sprinkling it on the graves.

For the past decade they’ve been coming to Beth Haim, the oldest Jewish cemetery in the Netherlands, because of the discovery here in 2002 of Holland’s earliest known grave of a former slave. A man named Elieser, he died in 1629 and was brought here from Portugal by his Jewish masters, who are buried right alongside him.

Named “Elieser Day” in his memory, the new pilgrimage is centered around the former slave’s gravestone inside the 406-year-old Beth Haim cemetery, a 10-acre swath of swampy meadow. About 26,000 headstones and human remains lie submerged under the mud – an unfortunate result of how Sephardic headstones, which are traditionally placed horizontally, have fared over the centuries in the soft Dutch soil.

In a post-colonial society that is still burdened by its complicity both in the Holocaust and the slave trade, Elieser’s grave has emerged as a multifaceted symbol of emancipation and a unique meeting place for the kingdom’s oldest ethnic minorities.

In 2013, a statue for Elieser was erected outside the Jewish cemetery by Opo Kondreman, an organization that aims to preserve the heritage of Netherlanders from the former Dutch colony of Suriname in South America.

It is also a lightning rod for occasional controversy. In June, amid a debate on racism following the slaying of George Floyd in Minneapolis, the statue was vandalized with the letters “WLM,” a possible acronym for White Lives Matter. The perpetrators, who remain unknown, used orange, the Dutch national color.

Before that, Black and Jewish leaders disagreed over whether Elieser’s grave represents the horrors of slavery or the possibilities for tolerance.

To Sergio Berrenstein, an activist with Opo Kondreman, the grave is a substitute for the graves of ancestors who were forced into slavery and whose burial place is unknown.

“My knowledge of my family doesn’t go further back than my great-grandparents,” Berrenstein, a 51-year-old father of three who was born in Suriname and works as a house painter, told the Jewish Telegraphic Agency. “For me and for many others in the Black community, Elieser’s grave is as close as we can get to them.” 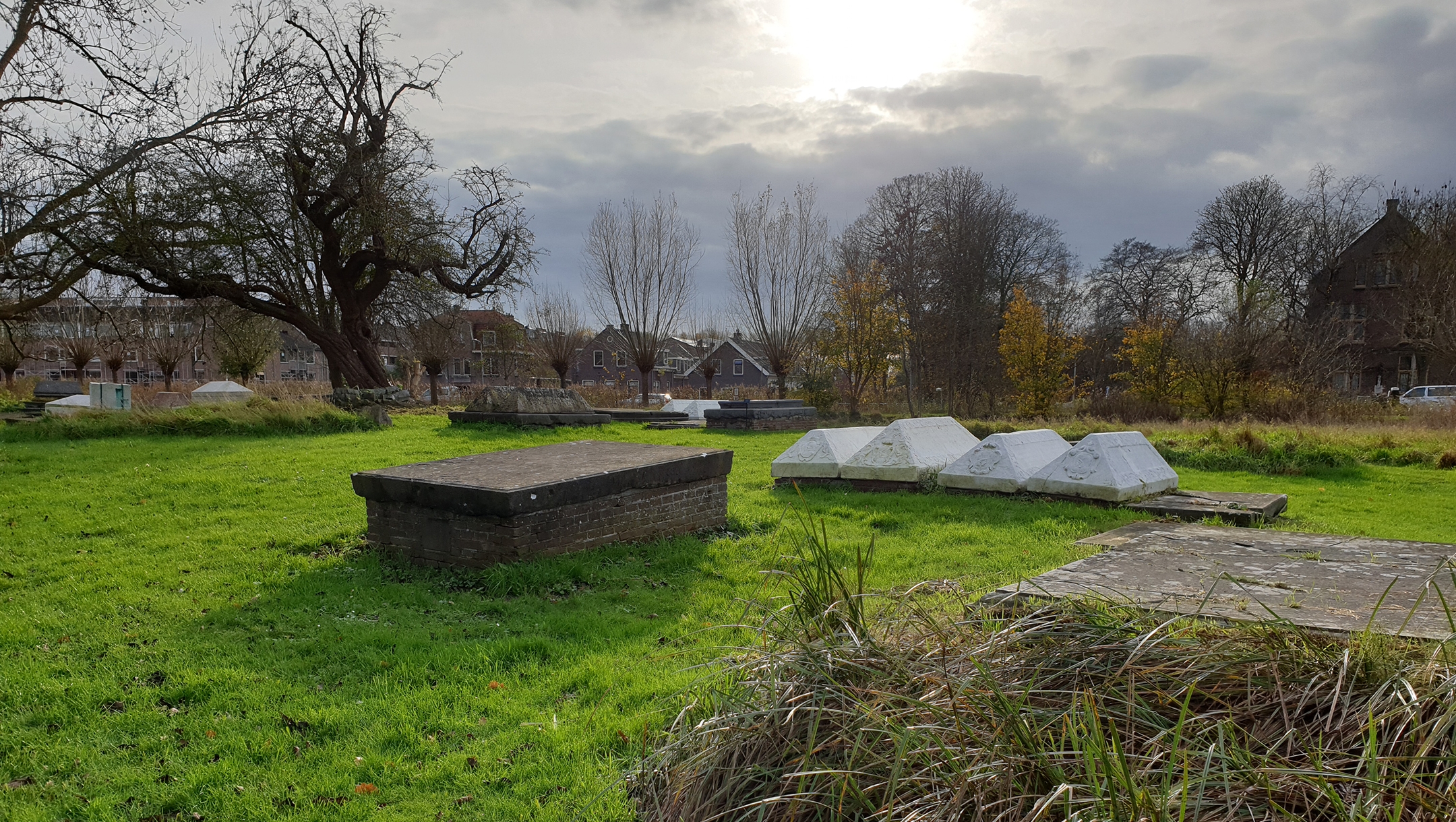 For Lydia Hagoort, the historian who discovered the gravestone, Elieser’s life story also reflects his acceptance as an equal and integration into the Jewish Portuguese family that owned him.

Elieser came to the Netherlands in 1610 as a slave to the family of Paulo de Pina. He is buried alongside his owner, but also next to Jacob Israel Belmonte, once the community’s richest businessman. That means Elieser was converted to Judaism and widely accepted as Jewish, otherwise he would not have been buried inside the Jewish cemetery, Hagoort told the Reformatorisch Dagblad daily in 2012.

Moreover, de Pina’s family must have paid extra to have him buried alongside them in a prestigious plot.

“It’s revealing that the Belmonte family didn’t object to having Elieser buried alongside them,” Hagoort said.

Slavery never existed officially in the Netherlands, so Elieser’s legal status was somewhat vague: The authorities did not classify him as belonging to the de Pinas, as far as Hagoort could determine.

“He attended the funeral of the wife of his master, Sara de Pina, and contributed to that occasion six stuivers,” a Dutch coin of the era, she said. That act suggests that Elieser was on or near equal footing with the family that owned him back in Portugal.

In recent years, caretakers have exposed and excavated only a handful of “culturally significant” headstones from the mud, according to Geke Beek, the Jewish community’s caretaker of Beth Haim. (A drought in 2018 exposed the outline of many headstones buried under Beth Haim’s thick coat of grass.)

In 2012, in search of his grave and armed with a cemetery record and a probe rod, Hagoort and the late Rabbi Hans Rodrigues Pereira found a black stone slab that appeared to be blank, the inscription erased by time and the elements.

“Or at least, that’s what I thought,” she recalled at the time. “The rabbi brought a bucket of water, poured it over the stone and the [Portuguese-language] text revealed itself: ‘The grave of the good servant Elieser.'”

The discovery embarrassed Dutch historians — they had declared that slavery never existed in the Netherlands. And it generated discomfort for some Dutch Jews, Hagoort said, because it was a reminder of the involvement of some of their ancestors in the slave trade. Exaggerating the role of Jews in the slave trade is a popular theme in anti-Semitic rhetoric, including by Louis Farrakhan of the Nation of Islam.

In recent years, institutions and leaders of Dutch Jewry have openly debated for the first time the issue of Dutch Jewish complicity in slavery, including in the so-called Jewish Savannah.

An area of what used to be Dutch Guyana, the Jewish Savannah had 40 Jewish-owned plantations with at least 5,000 slaves and a Jewish community of several hundred that was destroyed in a slave uprising in 1832. Nearly all of those Jews immigrated to Holland, bringing their accumulated wealth with them. 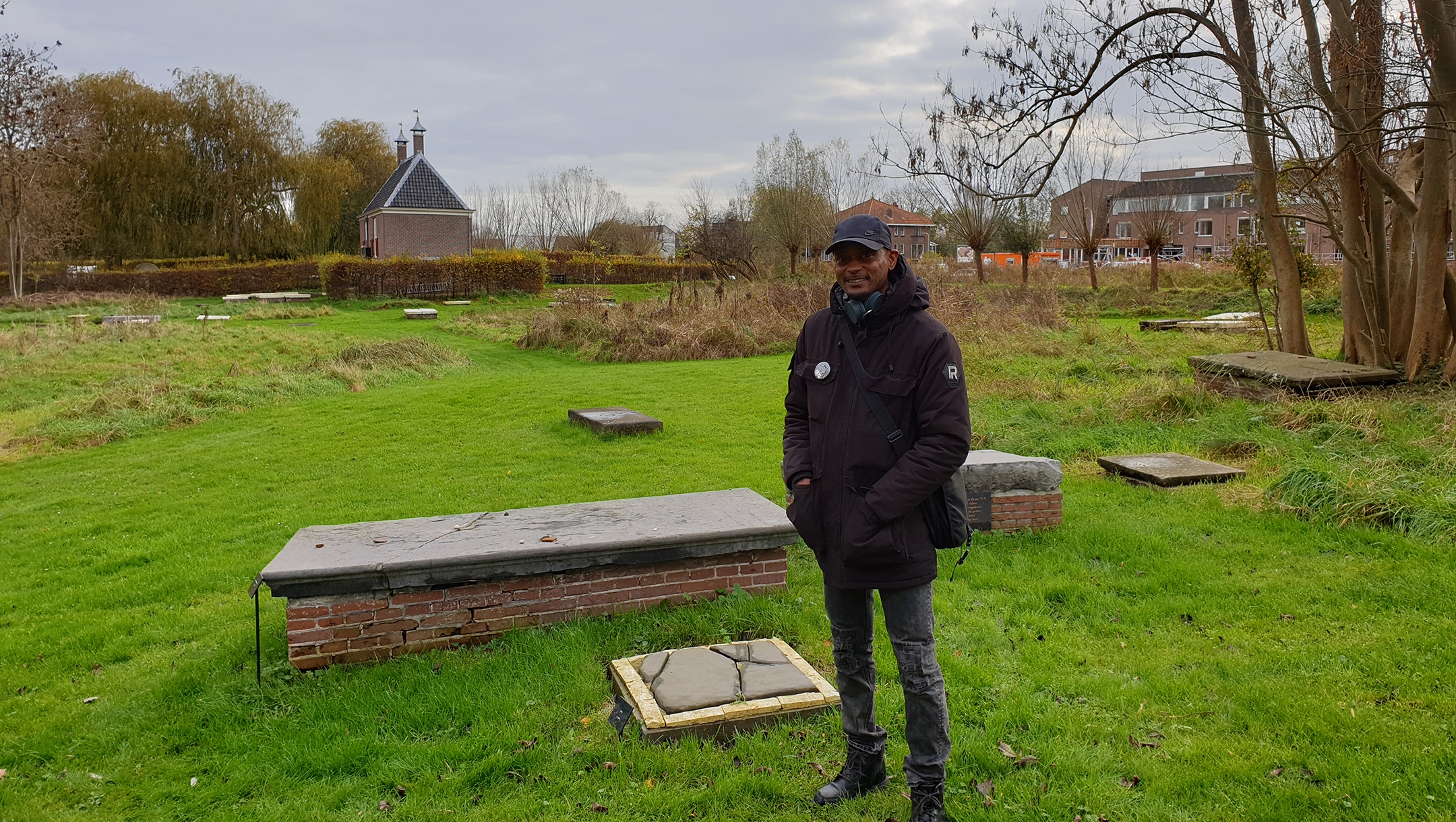 Sergio Berrenstein stands next to the grave of Elieser and his master at the entrance to the Jewish cemetery in Ouderkerk aan de Amstel, Nov. 20, 2020. (Cnaan Liphshiz)

These facts and others were on display in a 2015 exhibition on the subject by the Jewish Cultural Quarter of Amsterdam, and served as the basis for a 2014 book by Lody van de Kamp, a well-known Orthodox Dutch rabbi.

Elieser’s owners did not come from South America but straight from Portugal, from where they and thousands of other Jews fled in the 16th century to escape the Inquisition for the more tolerant Netherlands.

The discovery of Elieser’s grave also made headlines and reached Perez Jong Loy, Berrenstein’s brother, who decided to start a pilgrimage.

“Elieser is a symbol for how he ended up here against his will, dragged here by hook or by crook,” Jong Loy, Opo Kondreman’s founder, told the RTVA broadcaster during ceremonies in 2016. Loy died last year.

The pilgrimage required some adjustments on all sides, the caretaker Beek said.

“In principle it’s not allowed to say prayers that are not Jewish inside the cemetery, and it’s also not allowed to play music,” she told JTA. But an exception was made during Elieser Day.

“It’s about respecting another person’s belief,” the Opo Kondreman activist said. “Just as they respect our coming here, we respect their customs.”

Elieser Day has resulted in some tensions.

In 2012, Jacques Coronel, the late leader of the Dutch Portuguese Jewish community, focused on the shared heritage of Blacks and Jews in the Netherlands during a speech that he delivered on Elieser Day.

Citing Elieser’s integration into the community, Coronel said his grave “is also a sign of freedom.” He said the very existence of a Jewish cemetery in Ouderkerk aan de Amstel owed to the refusal of authorities in 17th-century Amsterdam to allow Jews to bury their dead within the city limits. Coronel added that many in the small town also resisted the plan for Beth Haim.

“We were both victims of the slave trade,” Coronel said. ”We have been, and still are, discriminated against.” He also spoke about the Jews’  liberation from slavery in Exodus.

But this attempt to highlight kinship provoked a rebuke from Nana Abrewa, a Winti priestess who often focuses in sermons and poems on the Jews’ perceived complicity in the slave trade.

“Moses freed the Jewish slaves, but then the Jews were the cruelest slave owners in Suriname. We’ve learned to forgive, but Susanna du Plessis cut off both breasts of the prettiest woman there, Alida. We can never forget this but we’ve learned to forgive,” Abrewa told Coronel in front of reporters. (Du Plessis, a notoriously cruel 18th century slave owner, was not Jewish but of French Huguenot ancestry.)

Berrenstein said he appreciates that both Jews and Blacks have been persecuted. But he does not feel a greater affinity to Jewish people than “other whites who do not understand what it means to be Black, to always be suspect of some crime just because of how they look,” he said.

Does Elieser’s grave symbolize anything for Beth Haim?

Her institution understands that his grave is an important site for the Black community and facilitates their commemorations there, she said. “But as far as Beth Haim is concerned, Elieser is just another Jewish person who’s buried here.”