In Israel, haredi Orthodox Jews wield enormous political power. Could that change because of COVID? 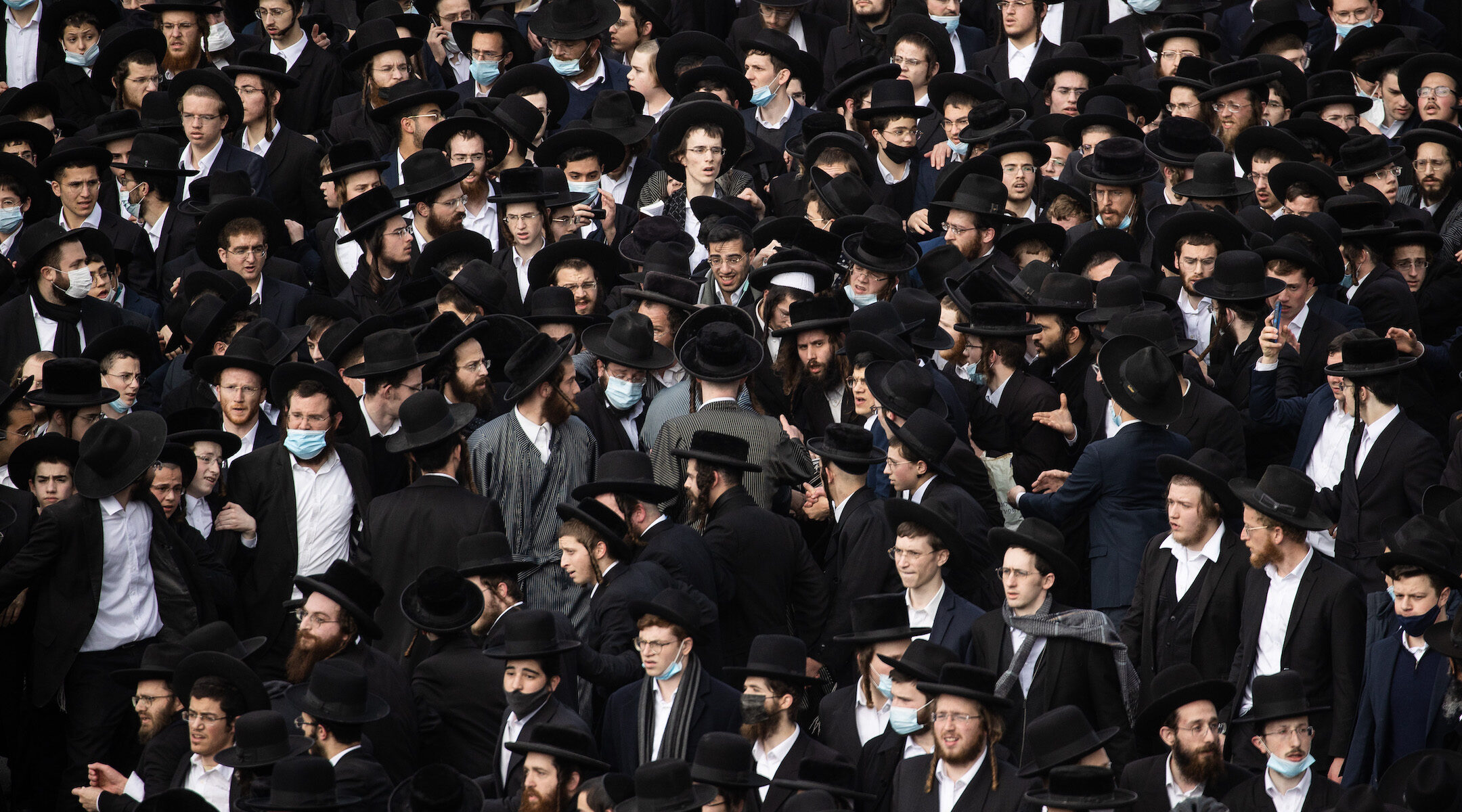 Thousands of haredi Orthodox men crowd the streets of Jerusalem for a funeral, the latest in a series of high-profile violations of COVID restrictions in Israel's haredi sector, Jan. 31, 2021. (Yonatan Sindel/Flash90)
Advertisement

JERUSALEM (JTA) — Violence against police officers. The torching of a public bus. Legions of men, many of them maskless, crowding the streets of Jerusalem for a funeral. Schools and community centers that have remained open despite skyrocketing COVID cases.

In recent weeks, haredi Orthodox protesters have become increasingly brazen in their disregard for Israel’s ongoing coronavirus lockdown. The violations of law have brought tensions between the ultra-Orthodox community there and the rest of the country to a breaking point.

Past conflicts between haredi and secular Israelis have not led to a significant shift in Israeli law or the influence that haredi leaders wield in government. But religious pluralism activists and researchers say that with anger festering over the COVID-19 pandemic and an election approaching, public anger over the haredim’s infraction could lead to meaningful change this time.

“Israelis are very frustrated and fearful about what it might mean for the future,” said Yohanan Plesner, president of the Israel Democracy Institute, regarding unrest in haredi neighborhoods. “This sort of underlying but strong sentiment will shape the events of the upcoming March election in a way that will produce a result which is very different from what we are seeing now.”

But it’s also possible that because of the way that Israel’s government works, this crisis could blow over like previous ones — with haredi power still entrenched. In recent decades, haredi political parties have been what Plesner, a former lawmaker, calls “almost a permanent fixture” in the government regardless of who is in control — giving them power to direct funding to their institutions and limit governmental control over their community’s affairs.

Over the past decade, haredi parties have become staunch allies of Prime Minister Benjamin Netanyahu. In return, they have enjoyed a continuing monopoly over several issues of domestic policy related to religion and state, as well as an exemption for haredi men from Israel’s mandatory military draft.

Haredi politicians over the years have come to “understand their role in the game as preserving a mini-autonomy of a state within a state,” said Uri Keidar, the executive director of Be Free Israel, which lobbies for the separation of religion and state.

According to government data recently obtained by Keidar’s organization, residents of haredi cities are significantly less likely to be fined for defying coronavirus regulations despite claims that they have been disproportionately targeted by law enforcement during the pandemic.

As a result of the disparities in enforcement, he said, “the public is ramped up and I do think there might be political implications.”

The issue was brought to the fore in late January following a week of violent clashes in which ultra-Orthodox rioters burned a public bus in the haredi city of Bnei Brak, stoned a photojournalist covering the clashes, attacked Jerusalem’s light rail system and fought with police attempting to shut down synagogues and schools that were open in defiance of Health Ministry regulations.

Israelis’ sense of a double standard was reinforced on Sunday after tens of thousands of haredi men, few wearing masks, flooded the streets of Jerusalem for the funerals of two rabbis who had died of the virus, prompting a police spokesman to suggest that enforcement was impossible.

“I won’t go and confront 20,000 people because I’m not capable of it,” the spokesman, Shabtai Gerberchik, told an Israeli radio station, according to Haaretz. “What can we do in this situation? Can I go in with cavalry and water cannons and break up the funeral procession? Is that sensible? Or should I just go there earlier and explain to leaders why it’s important they follow the rules?”

Will all of this lead to a restructuring of Israel’s relationship with its haredi community?

Polls show that an anti-Netanyahu coalition may be able to form a government without relying on the support of haredi parties. As in previous election cycles, a recent poll showed that a majority of Israeli voters preferred a government that excluded those parties.

Past governments that have attempted to abolish haredi privileges have seen those reforms erased after only a few years. In the 2013 election, the secularist Yesh Atid party had the second-most votes and formed a coalition with Netanyahu. Yesh Atid managed to push through significant cuts to haredi entitlements and pass a law requiring haredi men to participate in the military draft. But those changes were reversed after the subsequent election, which saw haredi parties rejoin the governing coalition.

“Both sides have grievances, and they have flared up in waves over the years, and when they do they sometimes create a genuine political change,” Israeli pollster Dahlia Scheindlin said. “But those changes are often of limited durability. So the wave kind of ebbs for a while until something else happens.”

Major change will likely only come if haredi voters begin to desert their own sectoral parties, but recent polls have found that haredi parties are likely to keep their current number of seats. So barring any major political realignments, their strong bargaining position will remain unchanged. And consistently high haredi birth rates mean that there’s a steadily growing number of haredi voters.

“What pollsters need to keep in mind is that around 14,000 haredim, boys and girls, turn age 18 each year,” said Binyamin Rose, editor at large of the ultra-Orthodox weekly magazine Mishpacha. “That’s a lot of firepower on Election Day that I don’t believe the pollsters have a way of accounting for and [it’s] why they always tend to underestimate the performance of the haredi parties.”