Denver Riggleman lost his job in Congress because of the far right. Now he’s working with a Jewish group to fight extremists. 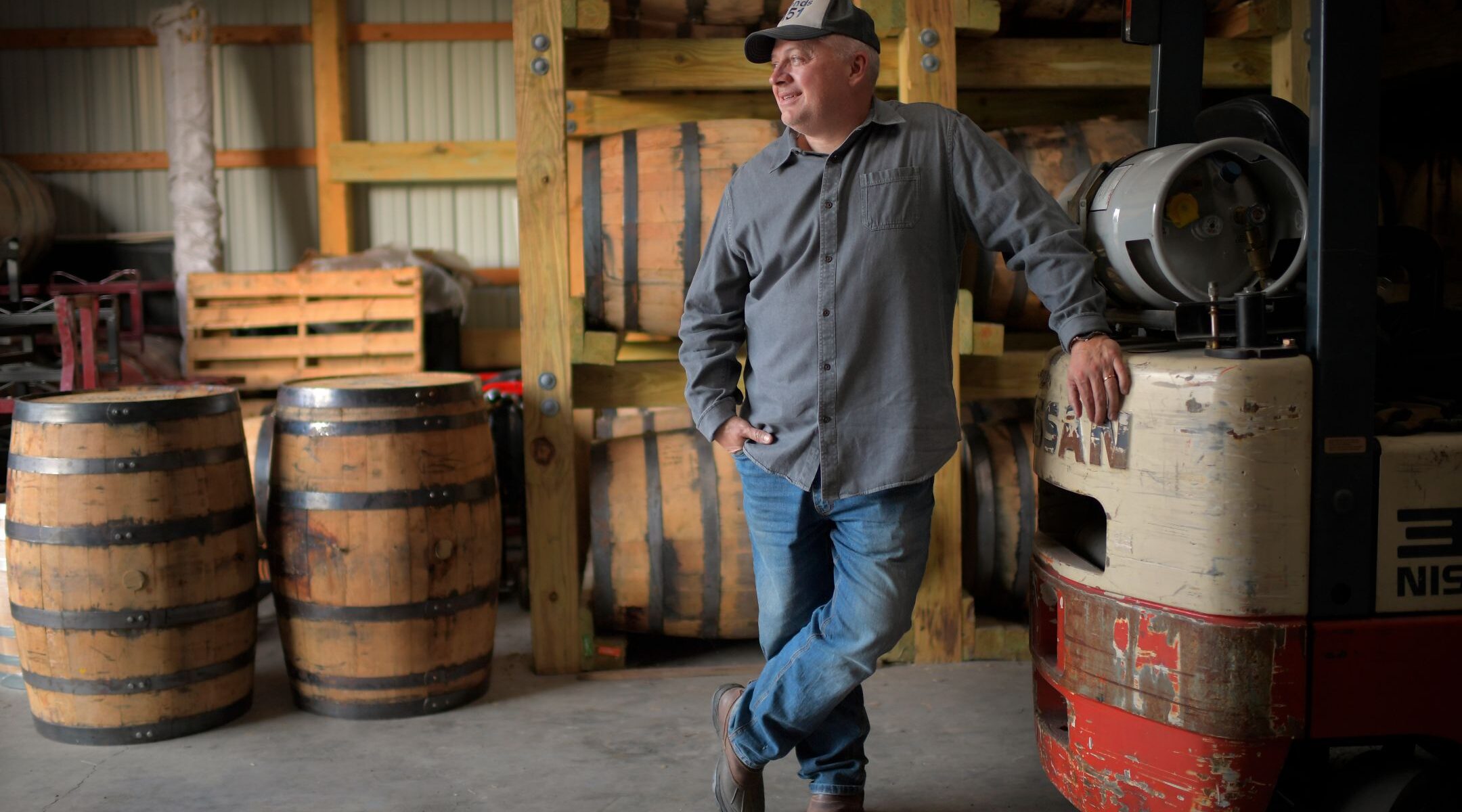 Former congressman Denver Riggleman in his barrel barn, where he ages spirits from the Virginia distillery that he co-owns with his wife, Nov. 20, 2020. (John McDonnell/The Washington Post via Getty Images)
Advertisement

(JTA) — One of the first things Denver Riggleman did after being ousted from Congress was to get back to his love — distilling rye whiskey.

Also high on his priority list: joining with a Jewish group to combat the domestic extremism that helped drive him from Congress.

Riggleman, whose Virginia district encompassed Charlottesville, joined the American Jewish Congress’ Advisory Board to Counter White Supremacist Terrorism last week. The former Republican lawmaker said his background in intelligence work for the Air Force and the National Security Agency enables him to connect the dots quickly between the threats that conspiracy theorists pose and the threat to Jews.

“It’s not like ‘six degrees of anti-Semitism.’ It’s right in front of us,” Riggleman told the Jewish Telegraphic Agency, citing invocations by the right of the Rothschilds and George Soros, the liberal billionaire political donor, as all-controlling monsters. “Why that’s not being attacked by more Republicans I’m just not sure.”

Riggleman made that case during a conference call introducing himself to the American Jewish Congress, once a major advocacy group that was victimized by Ponzi schemer Bernie Madoff a decade ago and now seeking to regain some of its influence.

“A lot of people seem to be unaware of how awfully anti-Semitic QAnon is and some of these conspiracy theories and these tropes,” he said, referring to the pro-Trump conspiracy theory that animated the deadly Capitol riot on Jan. 6.

“When you look at the Capitol siege, and you look at a lot of the baseline belief systems, what these individuals have embraced are really memes and tropes and language that are rooted in anti-Semitism throughout history,” Riggleman said Monday in an interview. “And I think when you see that, you get very frightened that this type of disinformation and this language of dehumanization is infecting certain parts of the Republican Party.”

Riggleman was elected in 2018, backed by the Republican Jewish Coalition in part because his Democratic opponent had been sharply critical of the U.S.-Israel relationship. Riggleman’s moderation played well in a district with a liberal university town surrounded by more conservative rural areas.

In 2020, right-wingers in his 5th District targeted Riggleman because he had officiated at the same-sex wedding of a staffer. Moderates, including the RJC, backed Riggleman. But challenger Bob Good won at a convention, where hard-liners tend to fare better than they do in a primary.

Good won in the general election, though by a narrower margin than previous Republican candidates in the district. Afterward he embraced some of the conspiratorial theories that fueled the violence, including false claims that Trump’s election loss this year was fraudulent and that the coronavirus pandemic was a hoax.

In embracing those theories, Riggleman said, Good was joining the ranks of “conspiracy peddlers and grifters” among elected Republicans. Chief among them, he said, is Georgia Rep. Marjorie Taylor Greene, whose behavior and social media posts, including one that blamed the Rothschild family for starting deadly wildfires in California, have induced a crisis within the party.

Riggleman relished his freedom to criticize the party after Good ousted him at the convention, joining a Democrat, Tom Malinowski of New Jersey, in speaking out on QAnon and co-authoring — and passing — a nonbinding resolution condemning QAnon and noting that its theories “fanned the flames of anti-Semitism.”

He said he doesn’t envy Kevin McCarthy, the GOP minority leader who is facing calls from Democrats, as well as the Republican Jewish Coalition, to remove Greene from committees. Former President Donald Trump, who maintains a grip on the party and whose support McCarthy recently solicited, is a Greene backer.

“What frightens me is it’s not just the politicians, but it’s those voting for them that have embraced this conspiracy theory nonsense,” Riggleman said. “It’s going to be very difficult for McCarthy to pull her off a committee after she puts a tweet out there saying that she had a call with President Trump and right after McCarthy met with President Trump.

“I think Kevin’s in a very difficult position politically, but I think morally this is a no-brainer — he pulls her off the committees.”

Riggleman said there’s a role for Jewish Republicans in setting the party straight by backing moderates like himself.

“I will humbly submit you need people like me and Adam Kinzinger and Paul Mitchell and Liz Cheney,” Republican House members who criticized Trump’s lies about election fraud. “We can’t have individuals embracing this type of nonsense because it’s dehumanizing and it causes violence, and we saw that on Jan. 6.”

Riggleman is thinking of running for Virginia governor as an Independent. He agrees with Republicans on free markets, deregulation and low taxes and a robust national security posture, but separates himself from the GOP’s right wing on issues like marriage equality and climate change.

“I’m sort of one of those oddballs that really don’t fit in the far left or the far right, or really in any type of tribes when it comes to where you’re supposed to be in the party system,” he said.

Independents are long shots, and Riggleman is quirky — he has a fascination with another subset of conspiracy theorists, Bigfoot enthusiasts, that has led to misunderstandings. He said he can draw on supporters in both parties — he calls them “Denvercrats” and “Rigpublicans.”

Otherwise, Riggleman said, he has his distillery.

“We’re actually distilling rye whiskey this morning,” he said after a heavy snowfall papered his district in white. “We had to get everything cleaned up, you know, get the driveway scraped and all that because we have a 50-acre distillery property, so that’s what I’ve been doing since before dark early this morning.”